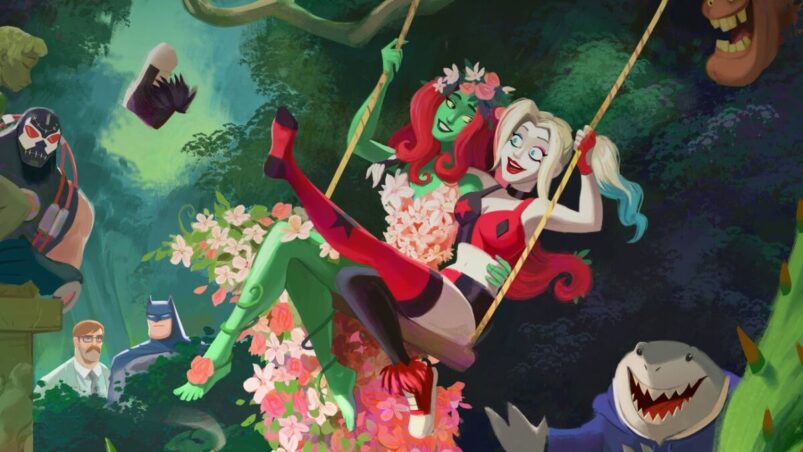 Season 3 of Harley Quinn picks up two weeks after Harley (Kaley Cuoco) and Poison Ivy (Lake Bell) confessed their love for one another and (literally) drove off into the sunset. The pair have been making their way across the globe on what Harley has dubbed “The Eat, Bang, Kill Tour,” but are called back to Gotham when Clayface (Alan Tudyk) and King Shark (Ron Funches) are captured.

In Gotham, Amanda Waller (Tisha Campbell) tells Harley it seems that Ivy is barely even a villain anymore, that she hasn’t done anything evil in a long time. And in her wisdom, Harley attempts to prove Waller wrong by bringing her to Edin, a terraformed paradise of Ivy’s making, that she hopes to one day expand to the entirety of the Earth. When one of Waller’s Suicide Squad members promptly arrives and destroys Edin, the third season has its overarching narrative: Ivy’s quest to terraform Gotham.

These outings also often offer lessons about teamwork or accepting disagreement with a partner that would feel saccharine if the show weren’t so bloodsoaked. Like the fine line of serial and episodic narratives each episode walks, the show also manages to maintain its hard edge, full of four letter words and extreme violence played for laughs, while delivering earnest and genuinely touching emotional moments.

Those moments are also expanded this season by a larger focus on Batman/Bruce Wayne (Diedrich Bader) and the extended Bat-family. It’s a bit awkward at first, and feels as though the bat-family storylines are drawing time and attention away from Harley’s crew, but the two overlap more and more as the season goes on. There’s the developing friendship (though Harley is loath to admit it) between Harley and Batgirl/Barbara Gordon (Briana Cuoco, Kaley’s sister) that largely plays on the dynamic of Batgirl being excited about their friendship and Harley pretending they aren’t friends.

A later episode in the season sees Harley and her team go into Bruce Wayne’s mind to discover the location of Frank (J.B. Smoove), Ivy’s plant friend who holds the secret to creating a serum that will help her terraform Gotham and the world. The episode begins what is a shockingly thoughtful consideration of Batman and Wayne as a man unable to let go of his trauma, or rather unwilling to let himself let go. That idea isn’t entirely original, but the way that the show portrays Wayne’s mind is something new and, frankly, devastating.

That said, the show also ruthlessly pokes fun at Bruce/Batman. In particular there’s the new development of his relationship with Catwoman/Selina Kyle (Sanaa Lathan) and his desperate attempts to make her love him. And the introduction of Nightwing (Harvey Guillén) this season means there’s a character so self-serious that he makes even Batman look downright joyous.

This season also takes an episode to focus on Joker (Tudyk), something that at first seems like a bad choice for a show so dedicated to Harley and her life after escaping his manipulations, but ends up being one of the funniest and most bitingly satirical episodes of the season as Joker throws his hat into the mayoral race.

The series politics aren’t only clear in this episode, or the ongoing subplot of Two-Face (Tudyk again) working to elect Commissioner Jim Gordon (Christopher Meloni) mayor, and bleeds through in a number of throwaway lines scattered throughout the season. The most damning of which likely comes from the young Bruce Wayne in the aforementioned mind-entering episode when Harley says he could help create affordable housing and his simple stunned response is “people pay for housing?”

Politics are also clearly an aspect of Ivy’s plan, and while the show doesn’t dive deep into the politics of climate change (it seems to take for granted at this point that it doesn’t need to, which is fair enough), it does offer some surprisingly brutal eco-horror moments as part of her quest. From humans being merged with plants, to plants growing sentient only to be horrifically destroyed by the same serum that made them sentient, Ivy’s mission offers viewers a bevy of horrifying images.

The season also offers subplots about King Shark’s return to his home kingdom, a Sex and the City riff centering on Bane (Matt Oberg), and Swamp Thing’s burgeoning romance with Mr. Freeze’s ex Nora (Rachel Dratch). But the heart of the show is always Harley and Ivy and, while the showrunners have confirmed that the two will never break up, the couple provide enough drama, conflict, and romance for a soap opera.

Their conflicts feel real but the fact that the two will never break up makes the conflicts seem less existentially threatening to the relationship and more like two adults (even if they aren’t exactly normal) who love one another figuring out how they can be the best for each other. Season 3 of Harley Quinn maintains the chaotic joy of the first two seasons, but with Harley and Ivy finally being romantically paired, the show may have reached its peak, one that I hope carries on into the already announced fourth season. 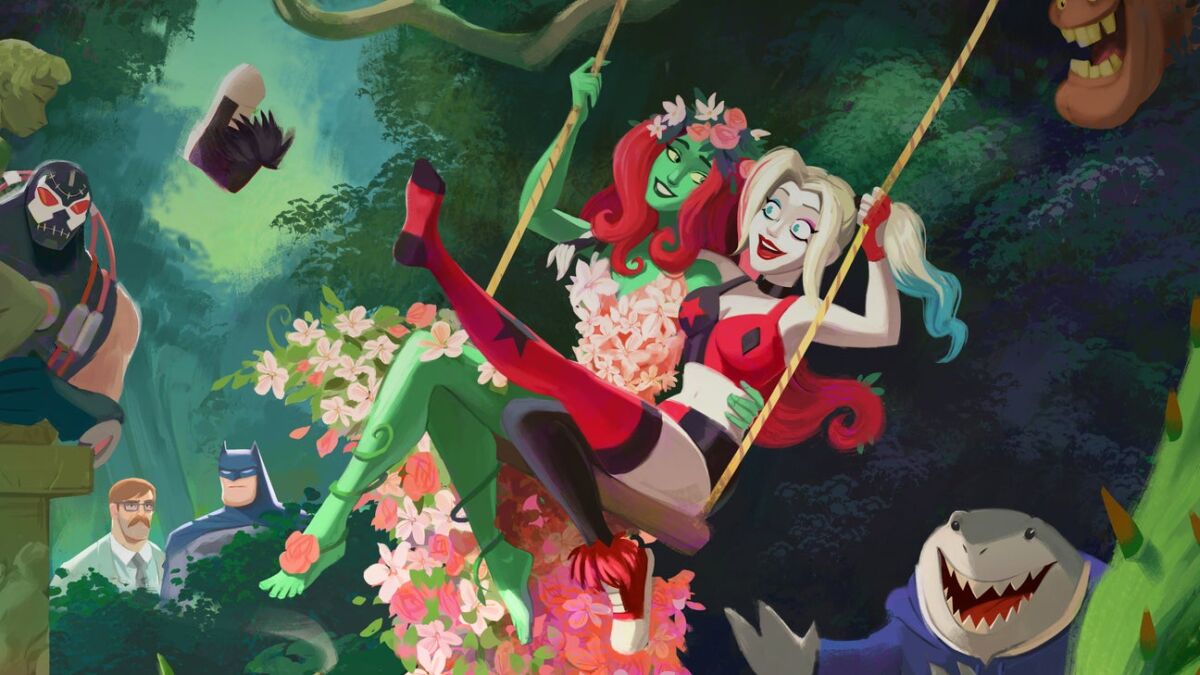 Verdict
Harley Quinn: Season 3 remains an anarchic delight that also offers some surprisingly thoughtful considerations of Batman/Bruce Wayne and an emotionally real portrayal of romantic conflicts.
8
Cultured Vultures is a pop culture website established in 2013 covering all things gaming, movies, and more. We eat your words.
All The News On The Biggest Games