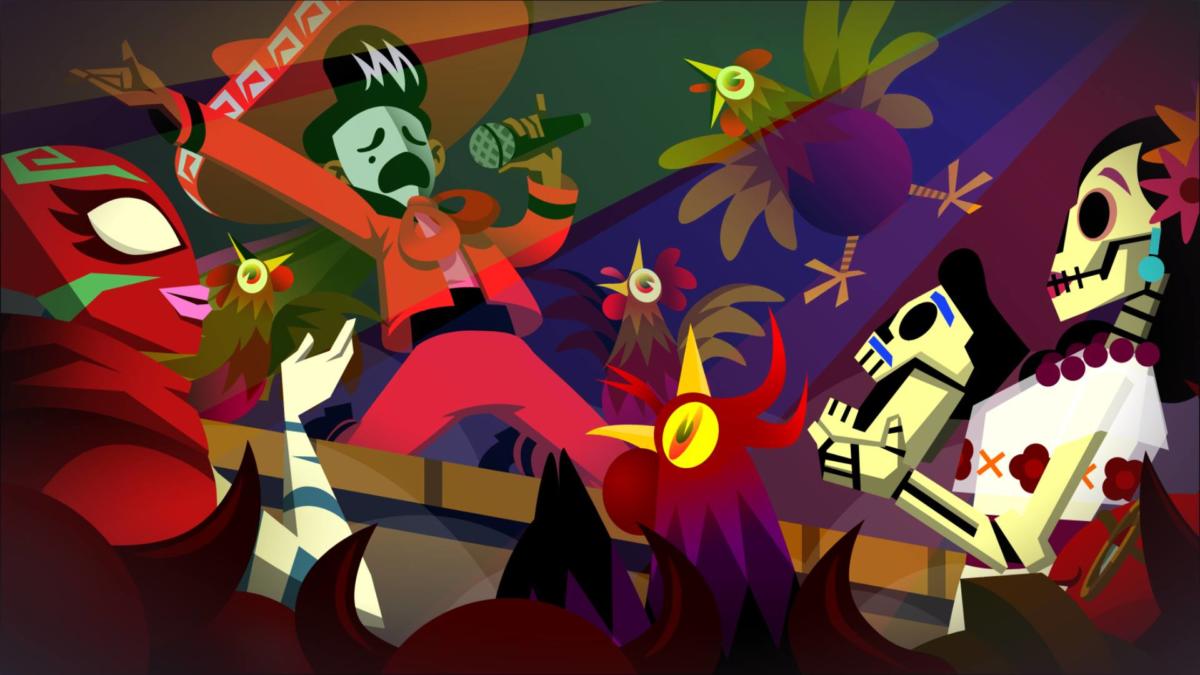 With all the shouting about walls and frozen water, it can be easy to forget how beautiful of a country Mexico really is. From its intricate mythologies and cultures all the way up to its music and people, there is so much going on South of the border. It’s nuts, and though it is true that not everything there is all sunshine and roses, Guacamelee! 2 does an outstanding job of helping you forget that and appreciate the best things the country has to offer with a dozen straight hours of Mexicana from Concentrate.

With the recent spike in Metroidvania games, it can be really feel more special to finally play a good one. A good Metroidvania has an interesting, fully explorable world, tons of hidden nooks and reward-filled crannies, a new ability around every corner and a strong endgame that’ll test your mettle and may even force more exploration and backtracking. Guacamelee! 2 has all of this and more, featuring the return of two dimensions to explore, Life and Death, as well as the introduction of timeline jumping, which leads to payoffs in both story and gameplay. 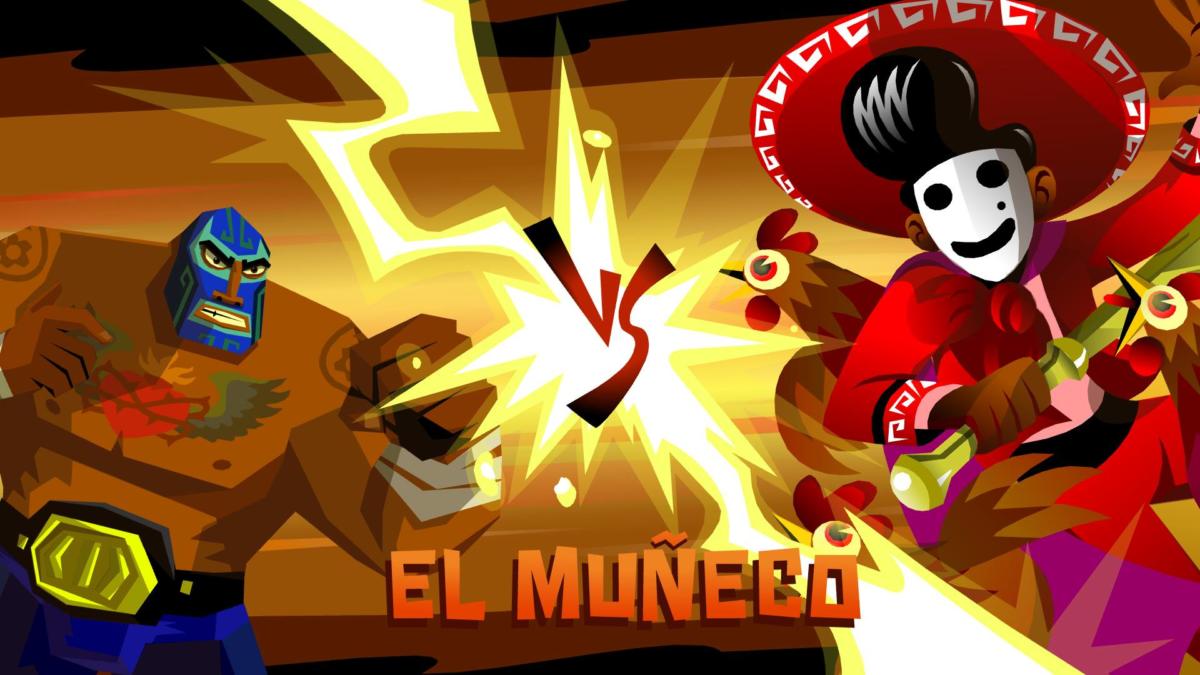 On top of the glorious exploration, Guacamelee! 2 continues to stand out from the rest by packing in complex platforming challenges and offering a deep combat system for when it’s time to get your hands dirty. Grappling is still as visceral as ever, especially after upgrading it, and the combo lab is much more forgiving than the first game, offering more viable combos that will help when your screen is packed with Alebrijes.

The Chicken even has a viable moveset now with grapples, special moves and more. It’s all very cohesive and is one of the best instances of genre-blending I’ve seen from an indie game to date. Top it off with multiple costumes and playable characters, secrets galore and an alternate ending and you’ve got gold.

The Mexiverse (as they call it) is realized beautifully. Dust billows through the dead agave fields, gold monuments to chickens and dead heroes shine realistically, and cities feel alive and bustling. Looking at the first game and Severed, it’s clear to see that the artists at Drinkbox know exactly what they’re doing with this distinctive art style, and it’s only gotten better over years of obvious tweaking. Lighting effects similar to those used in Rayman Legends give the characters and objects new depth.

Shadows are cast upon far-off backdrops and metallic surfaces like the Aztec-inspired temples give off an alluring Gold sheen. The watery surfaces even have reflections, and enemies spatter purple blood all over the walls upon death to add great visual flair. This is a culmination of all their work put together and it’s totally paid off for them. 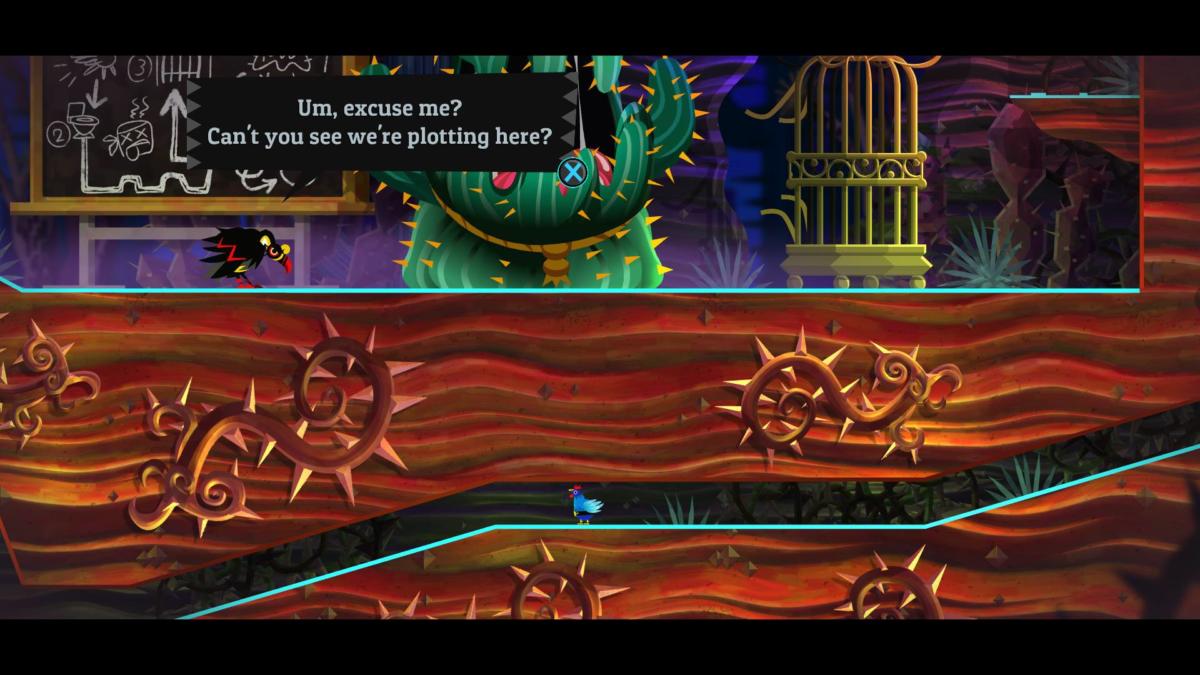 I would be remiss to talk so highly of the art and not bring up the ingenious writing. Jokes are thrown about with reckless abandon as the plot is fired rapidly through the fourth wall, and I honestly wouldn’t have it any other way. It’s been 7 years since Juan defeated Calaca in 2013’s Guacamelee!, and he’s fat, well-loved, and retired with his family, but he’s grown complacent. The dude can’t even smash a barrel anymore.

When it’s revealed that there are millions of timelines where Juan failed to defeat Calaca, leading to another Luchador taking over and summoning the evil power of the Sacred Guacamole, the plot launches you straight forward into an adventure spanning time and space. It’s 10+ hours of puns, memorable characters, video game references, betrayal, and overall wacky fun. Even the combo meter has witty one-liners that nearly took me the entire game to notice.

Guacamelee! 2 is so much funnier than the first game, and at some points even had me nearly out of my seat onto the floor with laughter. If you’re having a bad day, this is the perfect game to get you through it. And yes, the cringey memes from the first game are totally gone. Totally. They’re certainly not referenced in the game as a hidden joke area at all. Nope. Of course not.

The music adds another layer of authenticity to the entire experience, giving the over-the-top Mexiverse life. Despite not taking itself seriously with its writing, the game is dead set on providing a genuine mariachi-styled soundtrack that wouldn’t feel out of place at a Quinceñera. Towns have a hearty trumpet-laced soundtrack, while the wilder areas have quieter horns to make room for a strong acoustic presence that’s fast and rhythmic. It’s all very beautiful and I can guarantee it will be stuck in your head for days.

Guacamelee! captured my heart back on the PS3, and even though I came into this game expecting to love it, it still shattered my expectations. The best thing a sequel can do is give you more of the first, but better, and DrinkBox totally delivers in that respect. The plot is engaging and hilarious, consistently egging you on to finish the game. The upgrade to the visuals is easily noticeable. I seriously still can’t get over how good Guacamelee! 2 looks, especially in motion.

New characters like El Muñeco are crammed with personality and returning characters like Flameface now have more to say after making it to the sequel (and being fully aware of it). New additions to combat like enemy variety and a robust skill tree, as well as a much larger focus on chicken combat made encounters feel fresh again. Nearly every aspect surpasses the original and I can’t wait to go back through in local co-op and share the experience with friends.

Verdict
Guacamelee! 2 is one of the best Metroidvanias on the market. The art style is fantastic. The writing is hilarious and will leave you in stitches on a whim. The world is diverse and chock-full of culture, life, and collectibles. And the game’s unique focus on combat and precision platforming sets it apart from the pack. It’s the kind of game you lose track of time while playing, and when it’s over you’ll just want more. Microtransactions: None
9.5