*Duel of the Fates intensifies* 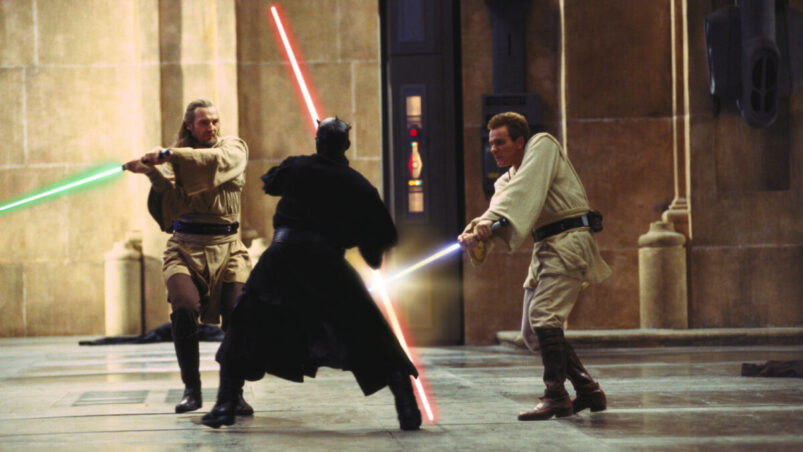 When the score’s good but the movie’s bad, the accomplishments of the composer are neglected and forever overshadowed by the film’s poor reception. Here are 10 scores that surpass the less-than-perfect films they were written for.

Where did it all go wrong for The Mummy? The movie has the biggest star in the world battling against a classic monster, a screenplay from David Koepp and Christopher McQuarrie, and was the second instalment (after Dracula Untold in 2014) of a much-hyped new franchise. That The Mummy managed to single-handedly bring an end to Universal’s Dark Universe is evidence of the studio’s careless handling of its own material.

The only contributor left unscathed in what quickly became a critical disaster was composer Brian Tyler. Adept at scoring fantasy and horror, Tyler’s Mummy score is creepy when it needs to be and as relentless as the title character, constantly propelling the action forward. Tyler deliberately echoes the score of the Boris Karloff staring version of the story from 1932, as well as taking cues from other classic Mummy films, including Jerry Goldsmith’s scores for the previous Mummy franchise.

The Phantom Menace is remembered as a critical disappointment and received some of the worst reviews of the entire Star Wars saga. However, the film has one of the strongest scores of the series in John Williams’s platinum-selling soundtrack and includes the most enduring musical theme of the prequel trilogy, Duel of the Fates.

In a score that effortlessly weaves Williams’s earlier classic Star Wars themes together with new compositions, the safest hands in film composing provide tracks that would subsequently be used again in Episodes II and III and across the expanded Star Wars universe, with elements of Duel of the Fates heard most recently in an Obi-Wan Kenobi trailer.

Danny Elfman has found himself scoring both the best and the worst of Tim Burton’s output during their ongoing partnership, with the director’s unsuccessful take of Alice in Wonderland providing another classic Elfman soundtrack.

The score, developed around Alice’s recurring main theme, is consistently better than the action it accompanies and is the driving force behind the movie’s pace. While there are many visual flourishes and touches of Burtonesque darkness, any praise for tension or atmosphere is due to Elfman rather than Burton, to the point where the score has become the most memorable piece of an otherwise forgettable endeavour.

Having created the blueprint for the modern slasher movie with the original Halloween in 1978, and now enjoying a career that has shifted towards composing, John Carpenter’s recent non-soundtrack work with his son, Cody Carpenter, and godson, Daniel Davis, has inevitably led the trio to score each of the David Gordon Green’s Halloween films.

With the new trilogy directly inspired by Carpenter’s classic (with the first Gordon Green film written as a direct sequel to the original), the Halloween Ends score combines a reworked version of the original theme and creates a brooding, tense atmosphere, outshining the poor quality of the latest movie, which ultimately relies heavily on the soundtrack to escape its own failures as a horror.

Has there ever been a good Fantastic Four movie? This 2015 Fox reboot was hugely disappointing to comic-book fans and is notorious for being worse than the previous two Fantastic Four efforts from 2005 and 2007. The universally poor reviews for this Josh Trank-helmed revival result in a Fantastic dud, with fans waiting for the MCU Phase 4 reboot due in 2025.

In sharp contrast, Marco Beltrami & Philip Glass’s soundtrack is an old-fashioned, brass-pumping score that oozes class on every track. Beltrami always provides a thrilling ride during action sequences, and his collaboration with Philip Glass lifts the score into another league. It’s so good that the movie’s best watched with your eyes shut.

The critical response to Blonde has been polarising, with the wave of negative and hostile reactions labelling the film both detestable and exploitative. Based on Joyce Carol Oates’ fictional account of the inner life of Marilyn Monroe, one of the few positively received aspects of the film is the impressive soundtrack by Nick Cave & Warren Ellis.

Having previously collaborated with director Andrew Dominik as composers for The Assassination of Jesse James by the Coward Robert Ford and as subjects of his 2022 documentary, This Much I Know to be True, Nick Cave and Warren Ellis provide a haunting and hypnotic score for Blonde that’s as uncompromising as the film. The slow, ambient electronica underpins the dark themes of the movie but works equally well as a standalone album.

A depressing waste of the talent involved, Dark Phoenix is a bland and puffy re-tread of the Jean Grey story arc, last seen in X-Men: The Last Stand. With previous X-Men composer, John Ottman, removed in favour of Zimmer, the Dark Phoenix soundtrack is the only redeemable element of a film that ends up being a disappointing whimper at the end of 20 years of Fox-produced X-Men movies.

An overlooked Zimmer score and one of his darkest works, the soundtrack succeeds by building tension and creating atmosphere through its synths and percussion. It also remains something of a curio among Zimmer’s back catalogue as it follows his 2016 announcement to retire from scoring superhero movies and is best listened to alongside the intriguing Xperiments from Dark Phoenix, the second soundtrack released featuring suites composed by Zimmer that weren’t used in the final film.

The movie is overly solemn to the point of being dreary and would suffer even greater woes if it wasn’t propped up by Newton Howard’s soundtrack. The emotion and threat felt by the central characters and the growing sense of urgency can be attributed to the strong cast and Newton Howard’s themes, rather than Shyamalan’s writing or directing. This is a score in need of a great film to accompany it.

Another unsuccessful reboot that pales in comparison to previous incarnations, 2019’s Hellboy is an uninspired, dull and unnecessary film, and while it fails to escape the shadow of Guillermo del Toro’s 2004 original, it includes a highly distinctive score by British composer Benjamin Wallfisch.

Wallfisch actively chose a new approach to the material for director Neil Marshall, purposefully bringing a harder edge to the music. Very much an action score, Wallfisch blends the orchestra with intensity-adding heavy metal guitars, making for a bombastic soundtrack that’s designed around the characteristics of Mike Mignola’s gruff hero.

Not every Apes movie is great, with many of the early 1970s sequels struggling desperately under the weight of 1968’s original. Meanwhile, Tim Burton’s 2001 ‘re-imagining’ is such a misfire that it fails to even feel like a Tim Burton movie. But whereas the film didn’t deliver the anticipated vision of an Apes reboot, long-time collaborator Danny Elfman produced a score that now sits comfortably among his best work.

Cautious that his compositions would overlap with the Jerry Goldsmith score for the original classic, Elfman went big and aggressive in contrast to the otherworldly quality heard in the 1968 version. With layers of percussion dominating the sound, Elfman’s score is pounding and muscular, with strings and brass adding to the overall sense of heightened action, making the score far more thrilling than the actual movie.