The History of Godzilla 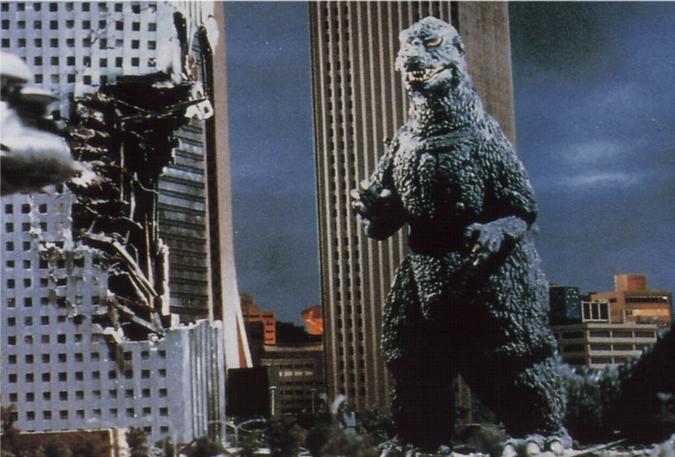 I imagine when the first rumblings of a new Godzilla movie began to surface, a lot of people were thinking the same thing: oh lord, not again. It’s hardly fair to blame them, I still feel a slight sting when I recall first laying eyes on the last western attempt to do the world’s foremost nuclear-powered dinosaur justice. We were promised one of the most awe-inspiring blockbusters of all time and instead we got Ferris Bueller running around talking about worms while an utterly ineffectual military blew up most of Manhattan in pursuit of something that definitely wasn’t Godzilla (it looked more like an iguana with the mumps). 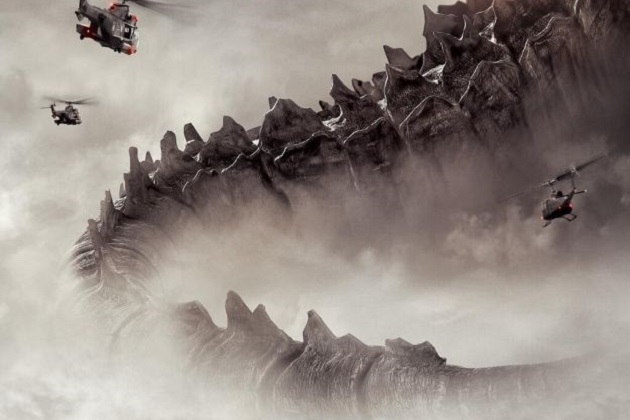 That aside, what’s the big deal about Godzilla anyway? I don’t think it’s necessarily apparent to everyone why it’s such a household name. Far from being the product of a single successful monster movie and the Eastern counterpart to King Kong, Godzilla has a 60-year legacy spanning 29 films behind him, that has defined an entire genre of films and inspired a generation of film-makers. So in light of new developments, I thought it would be the perfect time to take a look back at that legacy and examine just how much change the campy, rubber-suited escapade that is the ‘Kaiju’ genre has been through.

1954 – The First Godzilla Film is Released 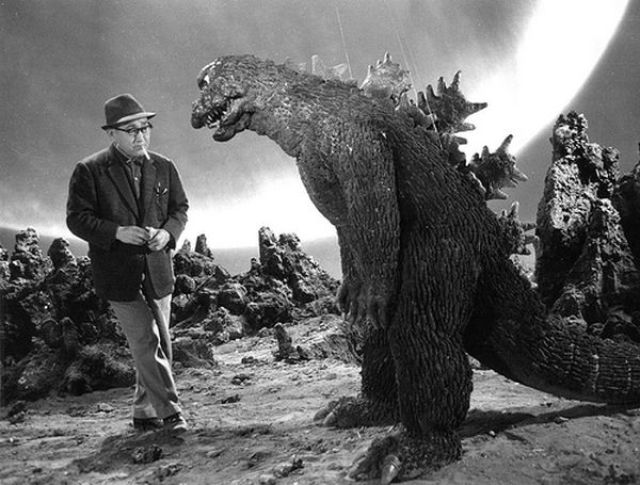 For all the popularity and parody that Godzilla has received in the west in the last 60 years, I think it’s fair to say that not all that many people have ever actually seen the original. It was directed by Ishiro Honda and it is legitimately one of the most depressing, harrowing films you will ever see. The production values are nothing particularly impressive but it was the message that was significant. Earlier that year the US had performed a nuclear test detonation in the Marshall Islands. A 15 megaton bomb was exploded and despite claims of the utmost safety precautions, numerous nearby locals were caught in the fallout and left with severe radiation sickness, including the crew of a Japanese fishing boat called the Lucky Dragon 5, one of whom died shortly after. This incident, conjoined with the looming aftermath of Hiroshima and Nagasaki, fuelled a deep resentment of nuclear weapons in Japan and Godzilla was intended as an allegorical representation of that. The beast himself is supposed to have been birthed by nuclear tests and his attacks in the film are eerily reminiscent of the chaos caused by the WWII bombings. Honda made it clear that taking the characteristics of a nuclear bomb and applying them to a monster produced the concept for Godzilla. Beyond sparking the film career of the world’s foremost celebrity monster (he even has a star on Hollywood Boulevard), the first film is representative of a nation that was blighted by nuclear weapons and bearing the scars. It’s essential watching.

After the success of the first film, both in Japan and in the US (a dubbed version which had Raymond Burr edited into it to increase western appeal), a sequel appeared the following year: Godzilla Raids Again. It had none of the dark tone of the original, a far campier affair that featured Godzilla knocking pagodas down, repeatedly besting a useless military and brawling with another giant creature, a huge spiky tortoise called Angirius. These three things would become the defining tropes of the following 21 years, during which the Japanese film studio Toho went monster-mad, clearly aware that they’d struck gold. Gamera, Rodan and Mothra were among the other monster movies that kicked off franchises during this period but Godzilla got the most attention, starring in 13 further films, flanked by various other weird creations.

Unfortunately while this period contains a wealth of classics, the overall quality is fairly low, some of the earlier films like 1964’s comedic and satirical Godzilla vs. Mothra and the entry that gave us my personal favorite: Ghidrah the Three-Headed Monster are genuinely of a high standard but the tone gradually became lighter and Godzilla transformed from a sinister force of nature to an overgrown puppy. The costumes, effects and sound design are all iconic but the plotlines also became more and more contrived, Godzilla vs. Hedorah was a bizarre environmental awareness piece and in Godzilla vs. Gigan he started talking in a weird, distorted English voice. The antagonistic forces in the films were always the same at this stage too, it was always aliens, be it Martians, space apes, space cockroaches or some obscure subterranean sect of the Klu Klux Klan. The final entry in this series was the agreeably dark Terror of Mechagodzilla, which drew the franchise to a ten-year hiatus.

This is where things start to get more complex. 1984 saw the release of The Return of Godzilla, a direct sequel to the 1954 original that completely ignores literally everything that happened during the Showa Era. Contrived as that was, this 11-year stretch is for my money the best period for overall quality. Godzilla was redesigned to look more sinister, he stopped dancing and remained the primary antagonist for almost every film in this series. Most of the other films set about reintroducing other monsters from past films into this new cannon, most notably Mothra, King Ghidrah and Mechagodzilla, in a run of excellent films. Further down the line the idea bucket clearly started running dry, because the new monsters that Toho introduced weren’t particularly imaginative. Space Godzilla speaks for itself, Biollante was some bizarre halfway house between Godzilla and Audrey 2 from Little Shop of Horrors, and Destroyah starts out as an Alien rip-off and winds up going through more metamorphic stages than a Dragonball-Z villain. Godzilla vs. Destroyah was the final film in this run and at this point Toho killed him off; the premise of the film basically being that he has an internal nuclear meltdown. At the time this must have seemed like the end of the franchise, but 3 years later something terrible happened…

After Jurassic Park the door was open for high-concept blockbuster movies to really step their game up and it wasn’t long before the Godzilla franchise fell under consideration, Tristar bought the rights to create a US Godzilla from Toho in 1993 but it took almost 5 years for any traction to develop. As is often the way with these things, numerous scripts and concepts were submitted and eventually Roland Emmerich took on the job following the commercial success of Independence Day. By his own admission, he wasn’t particularly wild about the project. After Toho saw the concept for Godzilla’s redesign they pretty much cut all ties with the film and said that Emmerich was effectively producing a new, US version of Godzilla completely detached from the Japanese one. Emmerich is an interesting specimen, he’s basically been making films in the same mold since the start of his career: silly, unconvincing disaster movies riddled with plot holes that benefit from big budgets and good distribution: Independence Day, The Day After Tomorrow, 2012 and so on. As much as I dislike his films I respect that he sticks to his convictions, but I cannot forgive the atrocity that was the 1998 Godzilla. If it had changed the title and just been a CGI-heavy US monster film it would have still been dire but that on its own is forgivable; as it stands the film is an appalling affront to an iconic series that completely dispenses with any attempt to accurately recreate the titular monster. This version of Godzilla doesn’t stand up straight, doesn’t breathe fire, has a completely different roar and is ultimately killed by the military. Wrong, wrong, wrong and dead wrong. The film is mocked by the Japanese to this day and thankfully it seemed to galvanize Toho into making a proper attempt to revitalize the franchise.

Following the US version, Godzilla was again remodeled and resurrected for the 1999 film: Godzilla 2000 (just to confuse everyone). It was more or less The Return of Godzilla all over again: revamping him, ignoring everything that came before and launching into a fresh start for the franchise. Weirdly though, the next three films that followed all did the same thing, repeatedly redesigning and redefining him in some arbitrary game of trial and error. Once again, all the old favorites were thrown back into the mix and the films in this series were all heavy on effects and far flashier than anything that came before. They’re all good on a technical level and some of the monster redesigns are excellent (particularly Mechagodzilla) but I always felt like these films felt a tad soulless and clinical. The final film is the worst offender: Godzilla: Final Wars, which is all wire-fu and gunfights on motorbikes. I suppose it makes a certain amount of sense that the films in this series elect not to take themselves too seriously given the subject matter, but I always thought the best examples dealt with death and destruction in a convincing, compelling way. Once again when this run ended it felt like that was a permanent retirement for Godzilla (outside of parodies and spin-offs) but rumblings of yet another US retread surfaced almost immediately after Final Wars was released, and step-by-step more information began to surface. 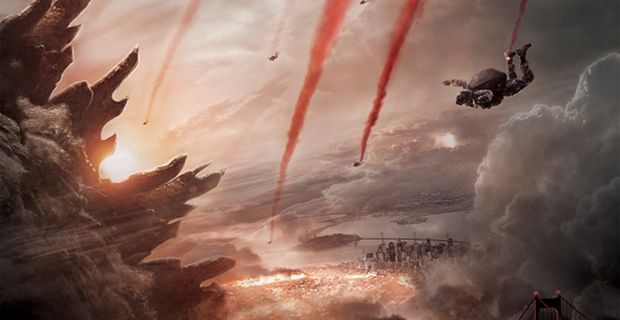 Just like last time the US tried this, the franchise bounced around looking for firm ground before Legendary and Warner Bros. finally nabbed it and set about attaching screenwriters and a director. David S. Goyer of the Dark Knight series was on board for a while but ultimately passed and it was eventually newcomer Max Borenstein who penned it, with a little help from Shawshank Redemption and Green Mile director Frank Darabont. Gareth Edwards was eventually selected to direct and I can’t think of anyone better suited, his breakout feature was a low budget, high concept drama called Monsters that followed the budding connection between two drifting souls travelling through the aftermath of a monster-apocalypse. It was brilliant and beautifully toned, focusing the action on the two main characters and rarely examining the bigger picture. Edwards has been on record as saying that the same approach has been applied to this new film and the abundance of acting talent involved (most notably Bryan Cranston) testifies to that.

Edwards claims that he set out to recapture the ominous, allegorical context of the original. The trailers, all set to the chilling strains of György Ligeti seem to suggest that he’s succeeded. Toho are far more directly involved this time around and one of the directors from the original series even produced it, so the potential of this being a highly worthy entry, perhaps even the best since the original, is high. There are even other monsters involved, and new concepts that will pay tribute to the classic pantheon. I’ve been an avid Godzilla fan since I was very young, I appreciate the message of the original, the amusing aloofness of the later entries and the imagination applied to the franchise as a whole and I cannot wait to see how this new entry turns out. In my opinion there hasn’t been a monster movie that captured imaginations as potently as any of the old Harryhausen fare, King Kong or the original Godzilla for many years and this may change all that. That’s well worth looking forward to.