Is Goat Simulator 3 Coming To Steam?

And will it still parody Dead Island 2? 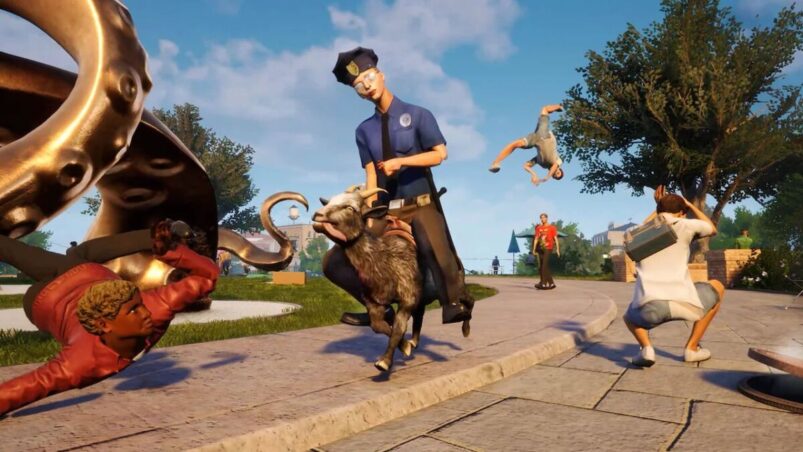 One of the biggest surprise announcements from Summer Game Fest Live! 2022 was the reveal that Coffee Stain are working on Goat Simulator 3, the second game in the Goat Simulator series. Just go with it, alright? The game was announced for PC via Epic Games Store, PS5 and Xbox Series X | S, though the news prompted many to wonder if Goat Simulator 3 will ever come to Steam.

The answer is more than likely, yes, though it hasn’t been confirmed as of yet.The game was announced to be a Epic Games Store exclusive, and typically those exclusives are timed for up to one year, before they’re eventually released on other platforms like Steam. That means if you want to headbutt humans in various explosives, in true Goat Sim fashion, but you don’t want to buy on the EGS, you’ll be waiting until fall/autumn of 2023 at least. There is also the possibility that Goat Simulator 3 never comes to Steam, but again, it hasn’t been confirmed either way.

Naturally, the news of Goat Simulator 3 hasn’t gone down too well with some fans of the first game who played on Steam, as the original game’s Steam page received a couple of discussion topic posts about how disappointed players are with the news. The Goat Simulator Twitter account has also jokingly commented on the news, replying to one user’s disappointment stating that they “aim to please”.

Goat Simulator 3 sees up to four players working together in online co-op to explore the sandbox playground that is San Angora, the catch being that you’re all goats with a penchant for chaos and mischief. Fans of the original game will appreciate that the core gameplay is still retained, namely that you can headbutt people and complete ridiculous quests. Whether you’ll be able to summon demons, be responsible for a zombie uprising or play an infuriatingly hard version of Flappy Bird remains to be seen, but with Goat Simulator, anything is possible.