Ghostbusters: The Video Game Remastered (Switch) REVIEW – Worth A Call

Ghostbusters: The Video Game Remastered feels like the ultimate fan tribute to the series. 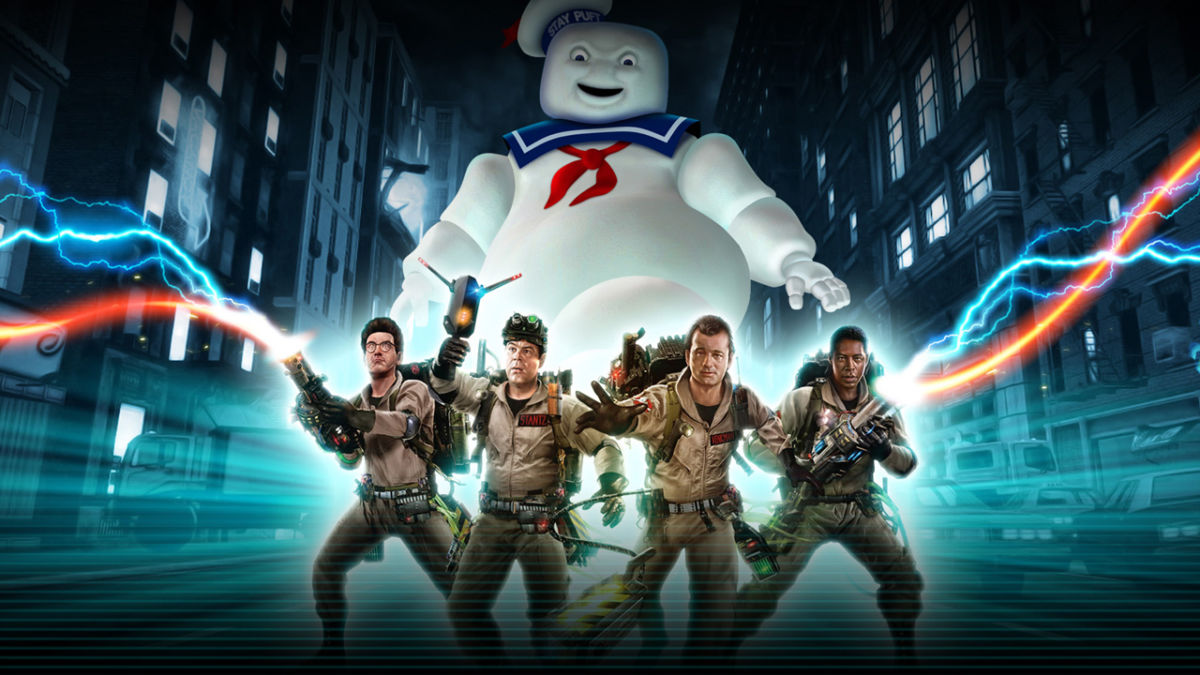 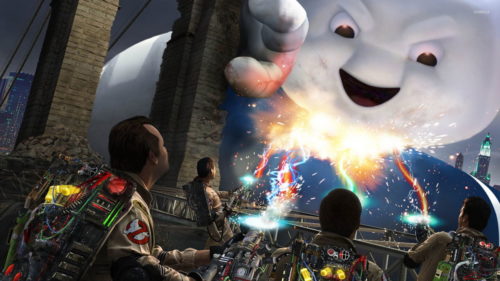 Back in 2006, a small developer called ZootFly began working on a Ghostbusters video game. Shortly later, they released a tech demo showing off some gameplay and cutscene footage. It generated a huge amount of interest from fans, but there was a problem. 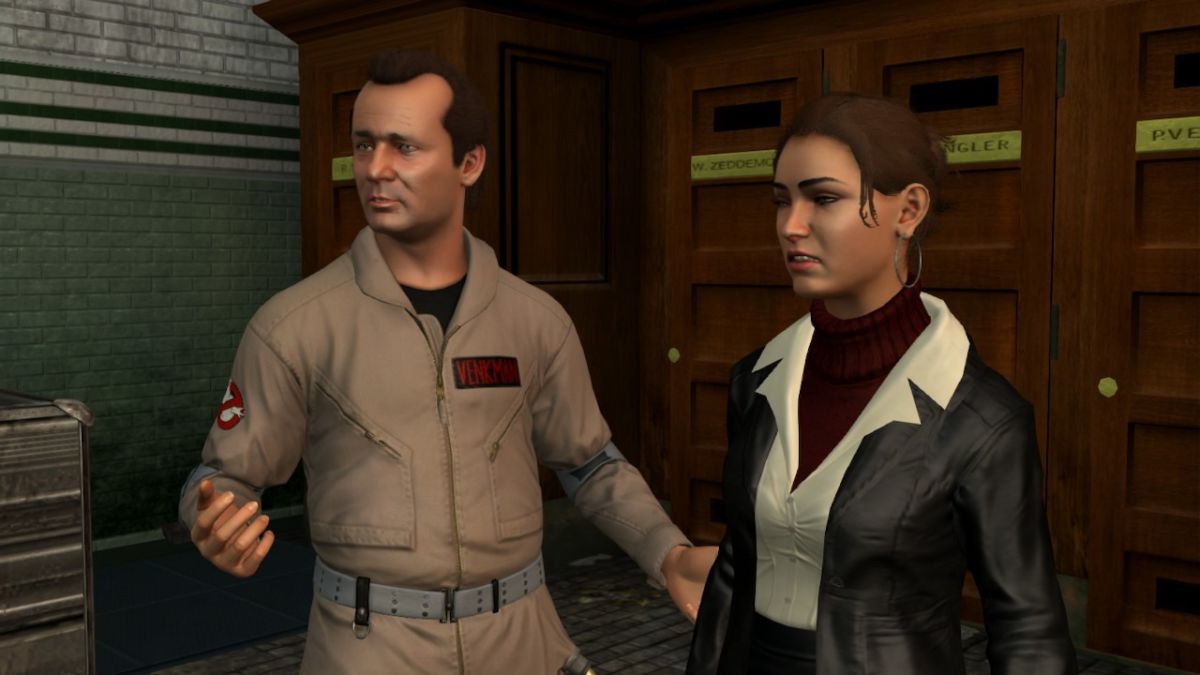 Sony had teamed Vivendi and Bloodrayne developer Terminal Reality to create a new Ghostbusters title, no expense spared. Original writers Dan Aykroyd and Harold Ramis were brought back to write dialogue for the game, as well as perform voiceover work for Stanz and Spengler respectively.

Ernie Hudson signed on to reprise his role as Winston Zedmore, but most unexpectedly, Bill Murray actually agreed to star in fshut the game. Murray has harboured some resentment for the franchise since Ghostbusters 2, so it was a genuine surprise to see him on-board. Annie Potts and William Atherton both reprised their roles as Janine Melnitz and Walter Peck, and Alyssa Milano and Bill’s brother, Brian Doyle Murray join the cast as original characters. 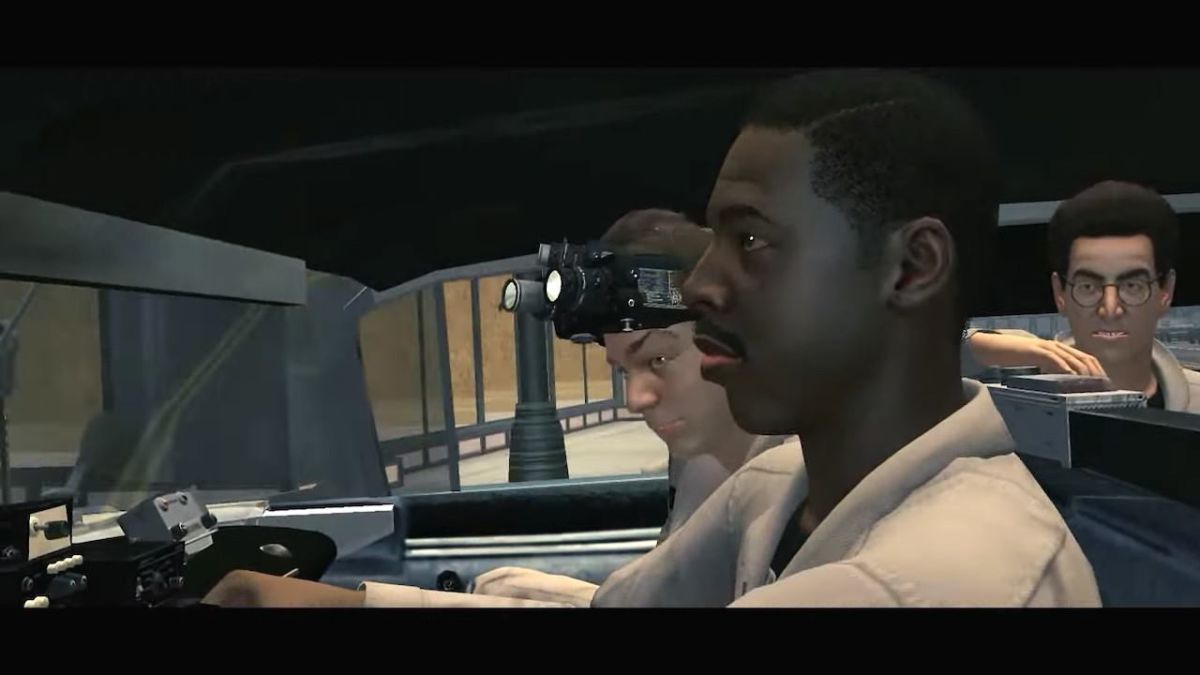 A quick note, this may be a remaster, but this is the first time that this ‘version’ of the game has appeared on a Nintendo console. Originally, the Wii saw a more cartoony version developed by Red Fly Studios. Ghostbusters: The Video Game looks great, but then again it always did. I’ve gone back to check out the original PS3/360 version, and found the graphics to be pretty excellent back then too. The design team deserve applause for getting the characters facial animations pretty true to life.

New York looks great, and making your way through Time Square is a particular highlight of the first mission of the game. Although many of the corridor sections (and there are many) look very samey, the textures and colours are crisp and vivid. One downside is that some objects that look transparent aren’t. For instance, I tried to fire through an empty clothes rail at one stage, and just hit an invisible barrier. 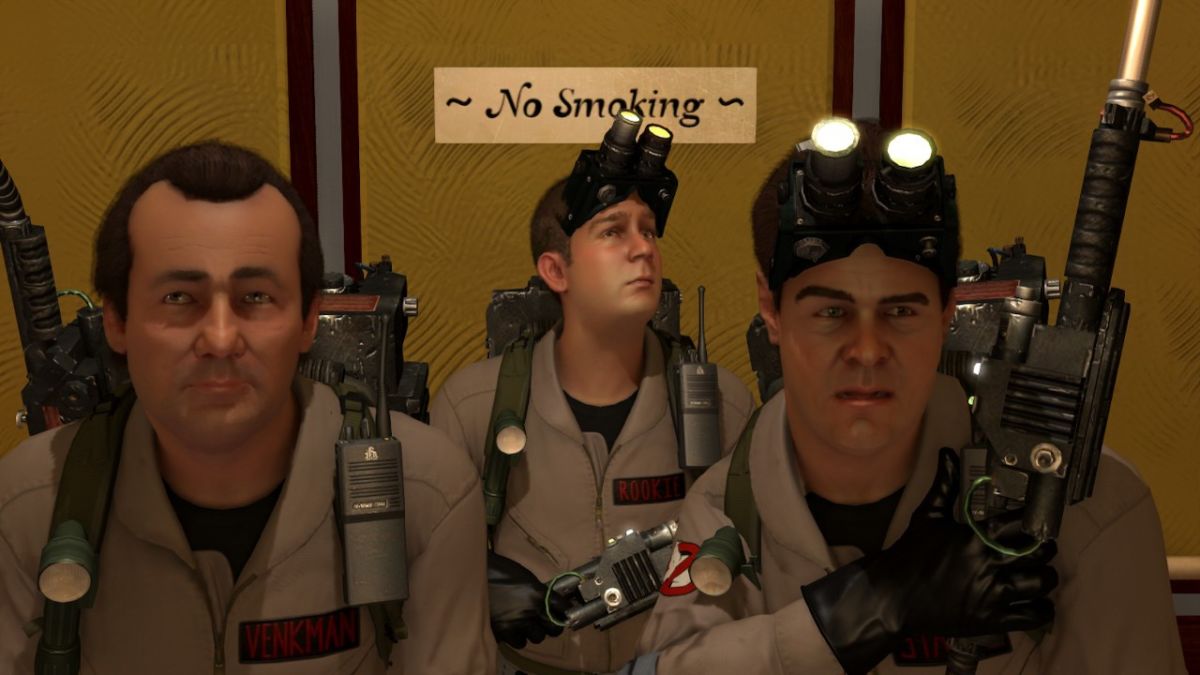 The cutscenes have been remastered from the original source material, which proved troublesome for Saber Interactive as Terminal Reality closed in 2013, and neither Sony or Atari had kept the cutscene assets for the game. Luckily, Saber tracked down a former artist who had kept all the assets.

The game looks overall a little better than the original: the lighting is improved and the textures are more complex, improving the detail. It isn’t a huge jump, though this isn’t the fault of Saber Interactive. Terminal Reality did such a good job with the original graphics that the PS3/360 versions still hold up today. The visuals haven’t jumped forward as much to be in line with this generation either, with the main improvements being in detail, animation, scale and processing power. 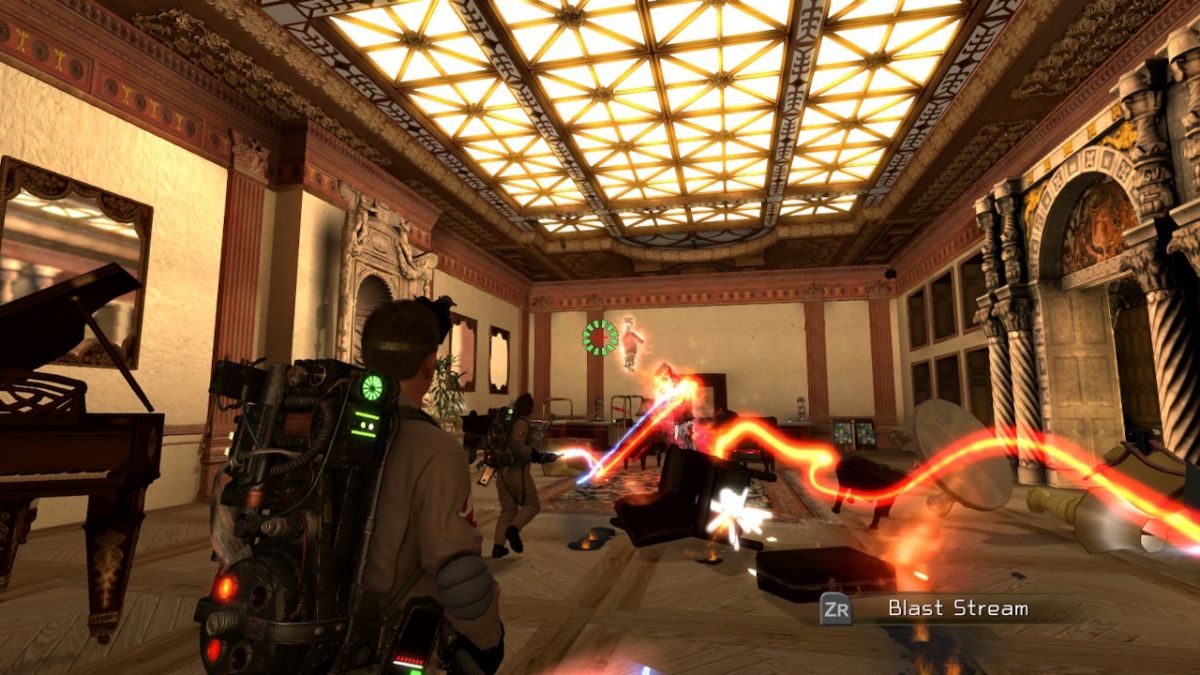 The voice cast do a superb job in this adaptation. It’s obvious that both Ramis and Aykroyd were in their element playing their characters again, and the rest of the cast turn in great performances. There is one voice performance that is a little hit and miss, though: Bill Murray. Murray was a challenge to get on board, and it took getting his brother cast in the game to convince him to sign on, and once he was on, keeping Murray working proved difficult.

Vivendi Universal Executive Producer John Melchior, who worked on getting Murray onboard, claimed that Murray only finished half of his scripted 750-800 lines. So, Venkman’s screen time is less than his counterparts, and there are some hilariously phoned in lines on Murray’s part, but overall, his performance is decent, and it’s nice to have him in the ensemble cast. 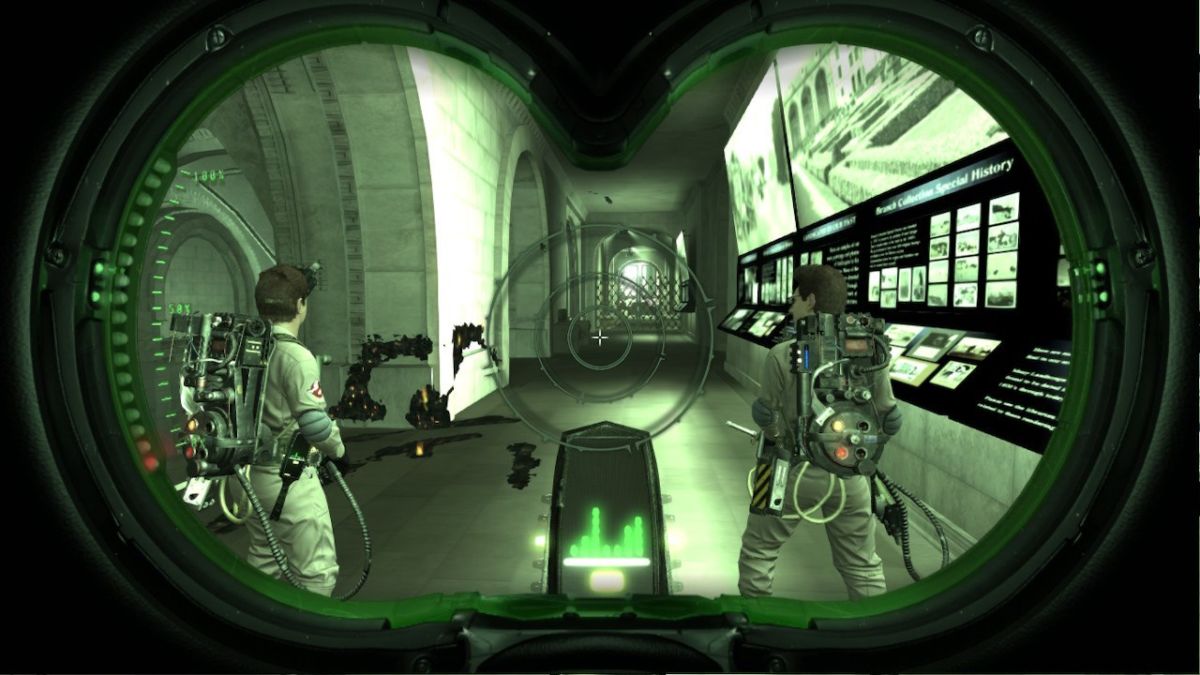 The soundtrack to Ghostbusters: The Video Game is easily the best thing about this game. Where other developers may have been tempted to squeeze the Ray Parker Jr classic pop hit ‘Ghostbusters’ in at every available opportunity, the game leans heavily on Elmer Bermstein’s original score.

Gameplay is where Ghostbusters falls down. While it’s not bad, it’s certainly not great. Movement feels a little bit floaty, but is nothing that spoils the fun. The AI of your fellow ‘busters is painfully annoying: often, they’ll stand when being pelted with projectiles, and when they’re not, they’re walking through your proton beam instead. 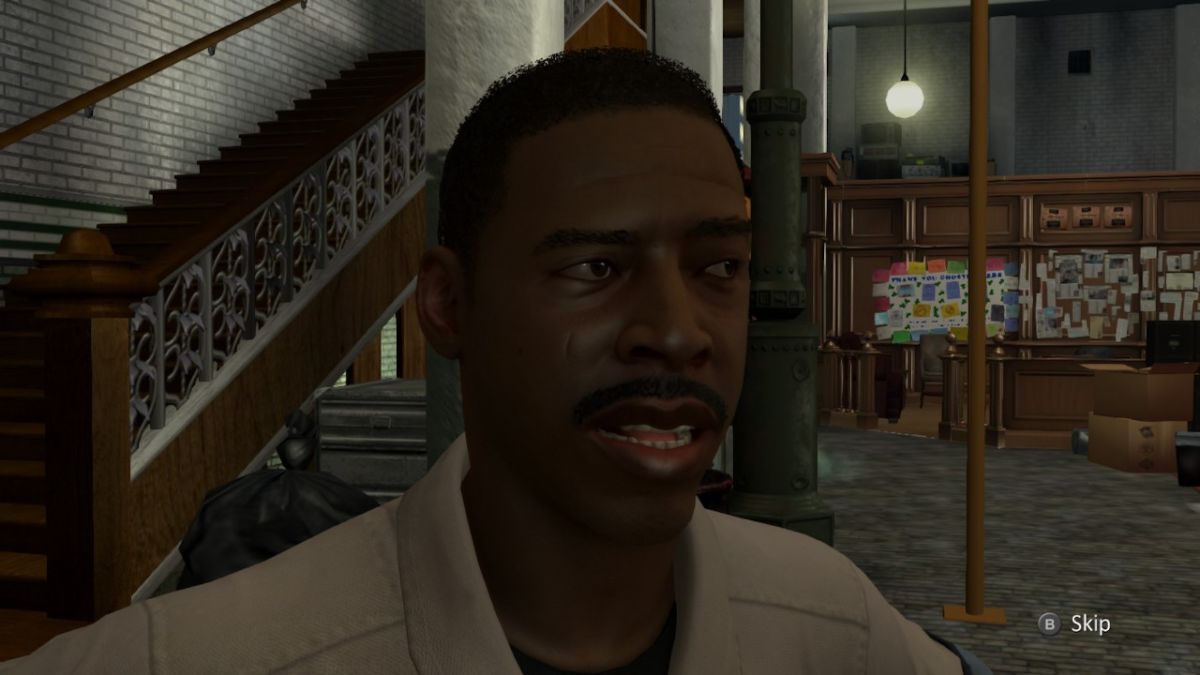 As you’d expect, the proton pack is one of the major draws of the game. It’s the primary weapon used to drain the energy of ghosts, as well as to wrangle them into your trap. Pointing the crosshairs at a ghost reveals a circular meter, which depletes as you fire at the spook. When the energy is low enough, you can attempt to start capture mode, although it’s easier to deplete the energy entirely as capture mode begins automatically. The pack needs to be vented regularly to avoid overheating.

Drop traps by hitting Y and you are given a pointer to wrangle your ghost toward. You can also search for hidden ghosts and interesting items using your PKE meter. The meter’s readings will get more frantic the closer you get to a point of interest, and scanning that point gets you money (or reveals a ghost). This money can be used to upgrade your proton pack. 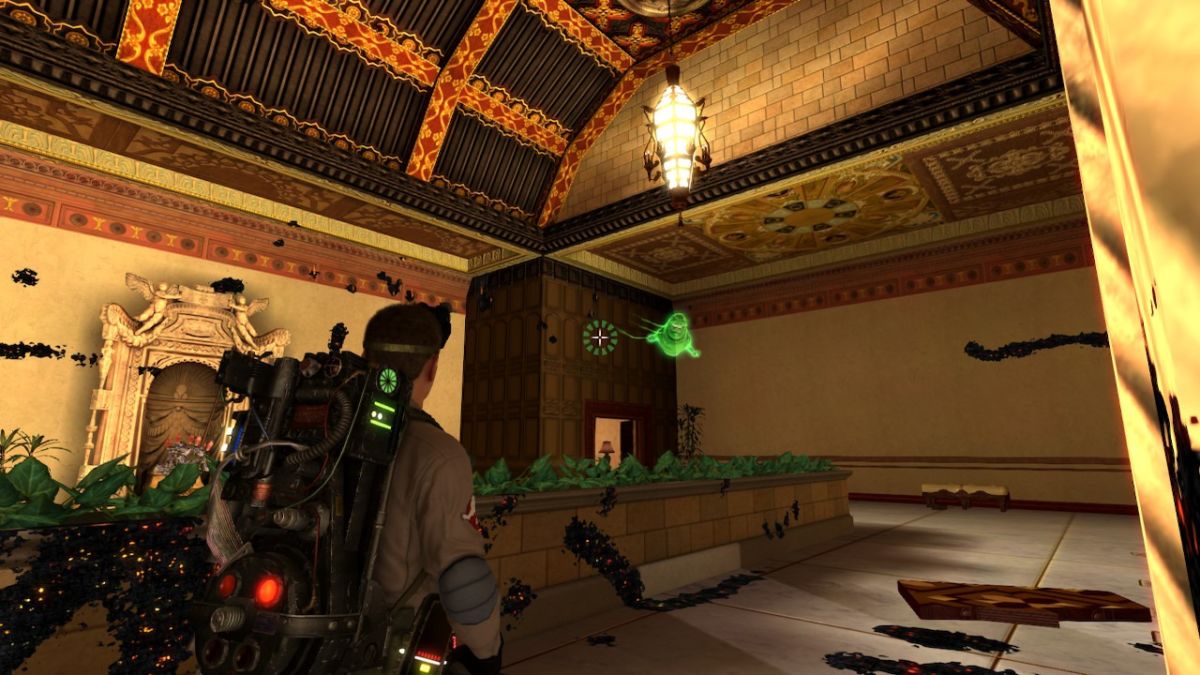 I feel I must mention that the proton pack is a little unwieldy to use. I believe this to be intentional, to try and replicate the ‘out of control’ manner that they are used with in the movie. But for anyone coming to the game without knowledge of the movie, it’ll feel as if the aiming is very janky indeed.

A nice touch is the energy and heat read-outs, which are displayed ‘Dead Space’ style on the proton pack, meaning there’s very little on screen apart from the action and the occasional button prompt. Heat measures how hot your pack is getting and will overload, leaving you defenseless if you don’t vent in time, and energy displays your health level. It’s a cool addition, but these meters are a little on the small side, and hard to see using the Switch in handheld mode.

The environments and level design are Ghostbusters’ weakest points. While they look nice enough, they can become a little repetitive. Some levels had me running up and down the same few hallways so much that I started to feel like Scooby Doo.

Enemies often feel a little bit too much like damage sponges, too. At one point, I was fighting six or more ghosts at one time. Each one felt like it needed a focus of its own, as there were three different types of ghosts, needing a different strategy to defeat them all. Having to defeat these enemies, mixed with my AI-challenged teammates while continually being knocked out and needing reviving proved to be less challenging and more frustrating.

However, despite its bad points, I am a Ghostbusters fan, and this feels like a rare project made especially for fans of the movies. It’s imperfect, but it’s accurate, and most of all, fun.

Verdict
Ghostbusters: The Video Game Remastered feels like the ultimate fan tribute to the series. It’s a lot of fun, but those who aren’t fans may not appreciate the attention to detail.
7.5