While FutureFrind's story is lacking and does ultimately feel unnecessary, it’s not enough to take away from what is a super fun game. 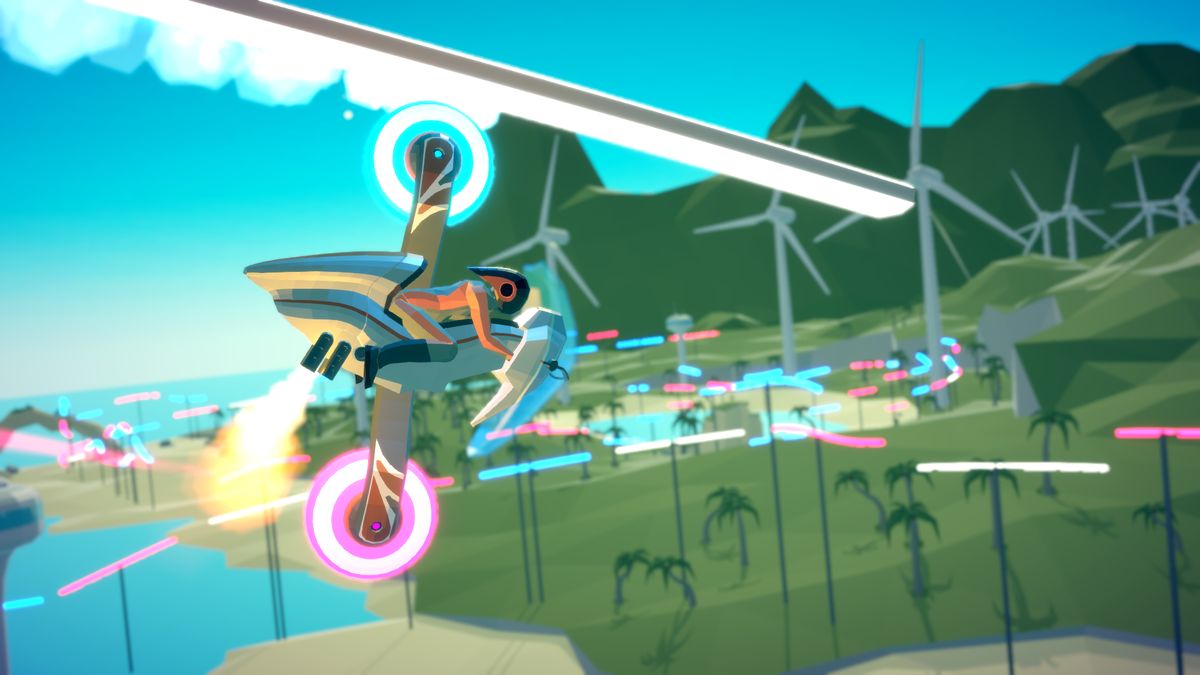 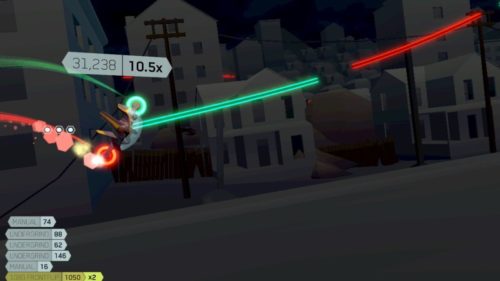 There’s a good chance that most reviews about FutureGrind will be making reference to a game that very clearly inspired it, so let’s get this out of the way nice and early here: yes, FutureGrind is similar to Trials HD.

Trials HD was, and is, a game that frustrated and challenged in equal measure, offering rage and reward in spades and FutureGrind does much the same, albeit the frustration levels are, thankfully, considerably less while the payoff feels greater.

FutureGrind is a Tron-inspired 2.5D stunt-platforming game that blends stylish trick combos with a variety of bike types, all of which come with their own quirks that require quick reflexes and skill to master. The basics are simple enough: grind each rail with the appropriately coloured wheel of your bike to make it to the end of the level and ‘survive the track’. Touch the wrong rail and you will explode. Such is life. 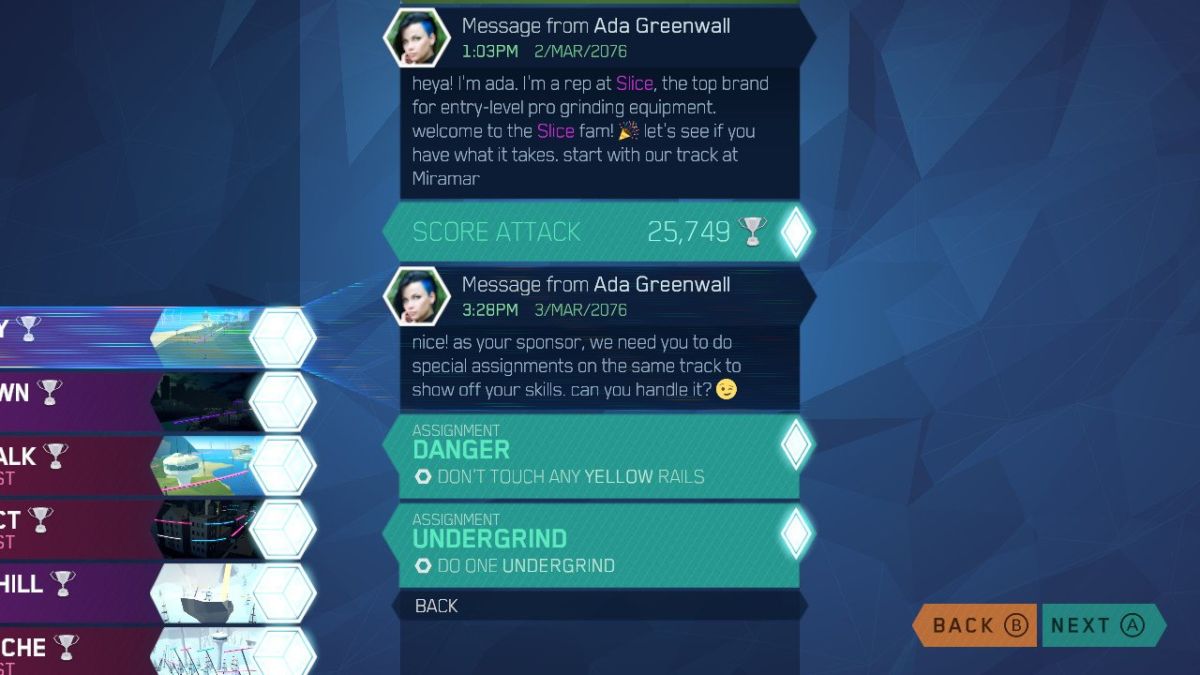 Your control a nameless character who has been approached by Ada, a rep of Slice, who has recently scouted you for your grinding skill. Quickly enough, other reps will soon follow suit, each providing a new bike to conquer. Each successive level follows the same format with three challenges a piece, and the first is to simply finish the track.

The second and third challenge will offer an objective to be completed, such as achieving a specific multiplier or performing a certain grind or flip. The meat of FutureGrind’s replayability is in its Score Attack, where a higher score will earn the player a better trophy going from bronze up to platinum.

To get the better trophies and scores though, you will need to utilise the Tony Hawk’s playbook of manuals, grinds and flips to rack up those big numbers. Usefully, there’s the option to check the ‘Grindpedia’ on the game’s main menu which will offer some other hints and tips on chaining combos together but most of what you learn will be accrued through much trial and error. 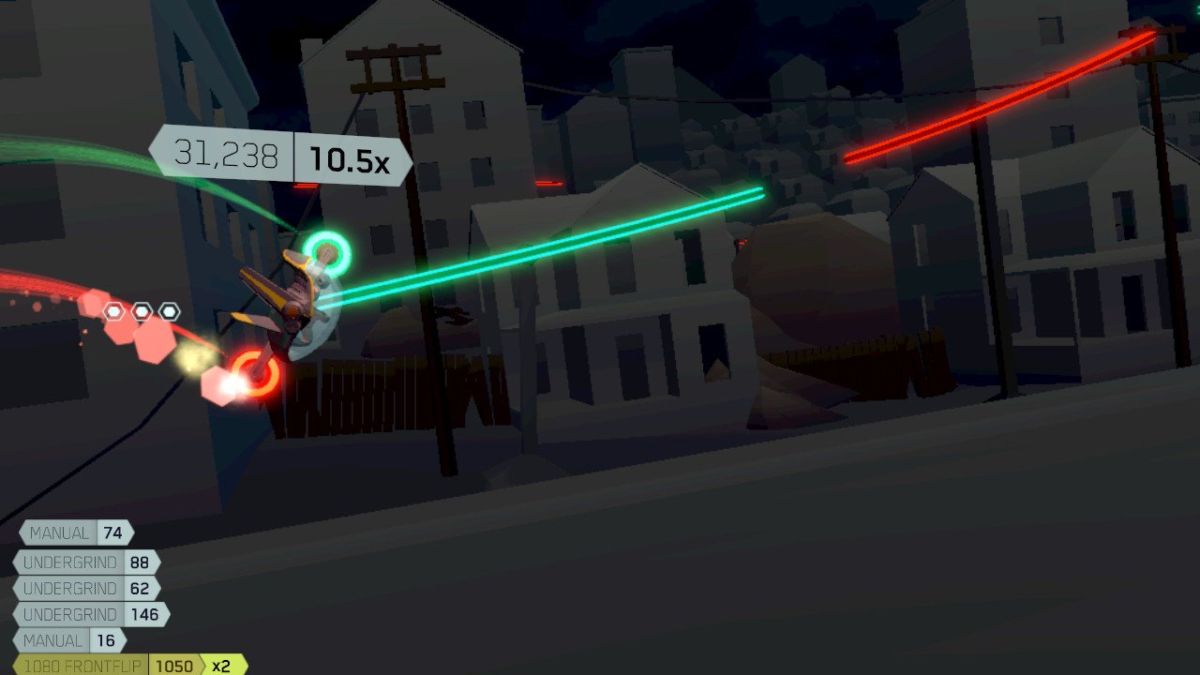 I started off doing more or less the bare minimum to make sure I could get to the end of each level but towards the later stages of the game, my confidence and creativity grew and I was much more competent in linking flips into grinds and transfers. Upon full release, expect their to be a leaderboard feature, where you can challenge and post your track scores against other grindy folk online.

The controls reflected the vibe of FutureShock for me, which is the epitome of easy to play and hard to master. A is to jump or double-jump and the directions spin you clockwise or anti-clockwise accordingly. The X button would apply an instant-restart to the track, handy for high-score hunters and if you’re ever in fear of a quickly pending explosion. I found the controls to be fluid and responsive, really complementing the fast pace of the game.

There are five bikes unlockable through playing the levels. You begin steadily enough with the Slice, with both its wheels the same colour and a double jump ability, progressively moving on to more difficult rides. Each bike felt notably different from the last, in terms of design, handling and personality – The Gimbal, for instance, has one large and one small wheel along with a faster rotation (physics be damned, you cursed offset pivots) whereas the Subverse model only has one coloured wheel, which changes colour each time you hit a rail. 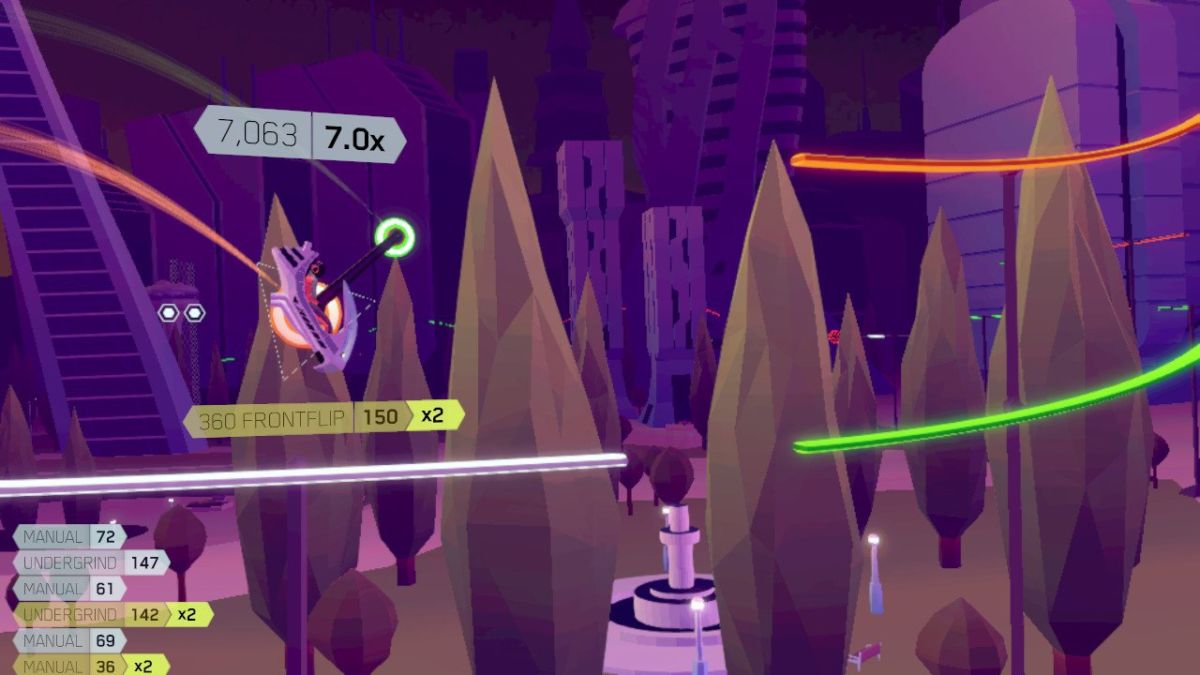 While the level doesn’t give you a choice in bike and locks you into a predetermined type per level, I did find it rewarding to learn each vehicles strengths and weaknesses. Each track and bike was a test unto itself and, even at its most frustrating, there was still a great sense of relief and joy to make it to the goal every time.

My main gripe with FutureGrind, however, was the story running through the levels. In a nutshell, as you move through the grinding ranks, not all is as it seems as there is someone watching you from the background. Ada, who I mentioned earlier, acts as your eyes and ears to the dark goings-on as you continue to act natural and grind away, occasionally helping out behind the scenes as you do all the jumping/grinding leg work. All the narrative is delivered in an SMS-style text format between tracks, so you’ll need to do a bit of reading to keep up.

Unfortunately, the story is largely inconsequential to the gameplay, with its big reveal only really coming into play by the time you are over 90% done with the tracks. Future setting aside, there was a great deal of build up to a rather whimpering reveal. Had the plotline been more tongue-in-cheek, you could let it slide but it came across far too seriously to not hamper things. 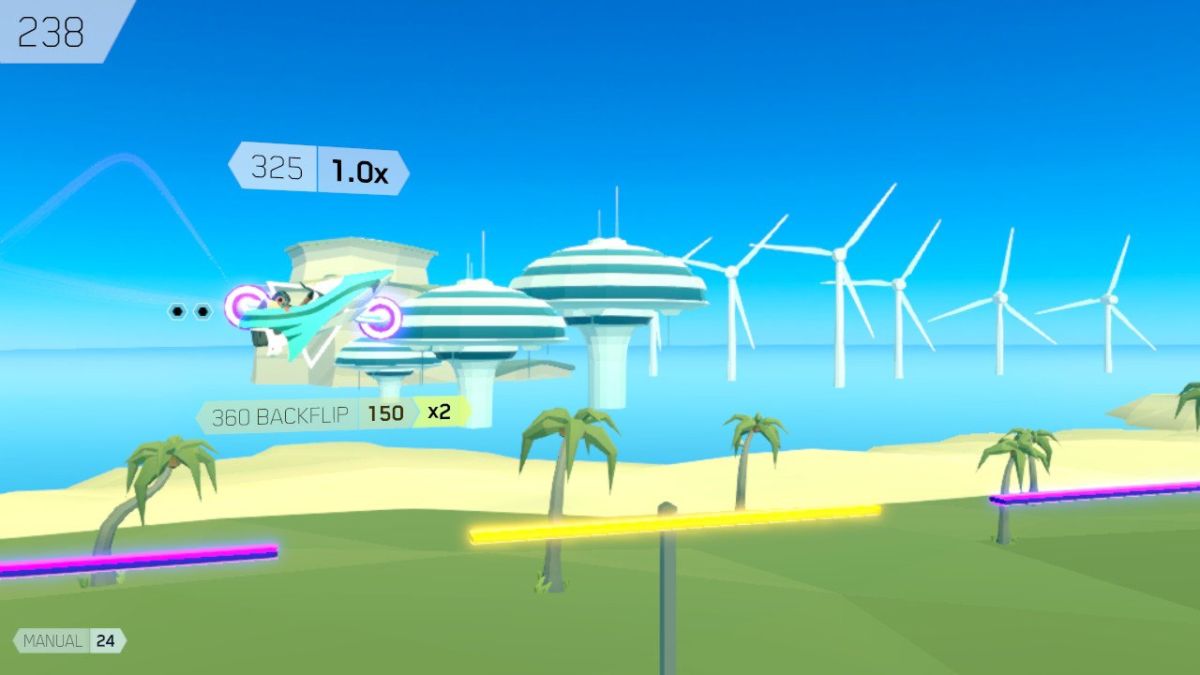 Each bike and track looks and feels different and I never felt like I was retreading the same ground, while the game incrementally and appropriately upped its difficulty the further I progressed. By the time all the future dust had settled, I couldn’t help but both want more levels and feel obliged to go back to previous ones to beat my best scores.

The comparisons to Trials HD that FutureGrind will inevitably receive are understandable but, for me, simply do not do justice to what a fun and colourful game this is. It’s a simple yet challenging platformer that rewards patience and graft and, even when you can feel that trials-and-tribulations anger rising, you still feel compelled to try again. And again. And again.

Verdict
While the story is lacking and does ultimately feel unnecessary, it’s not enough to take away from what is a super fun and replayable game.
8