Fortnite Season 6: Where To Find The Flare Gun 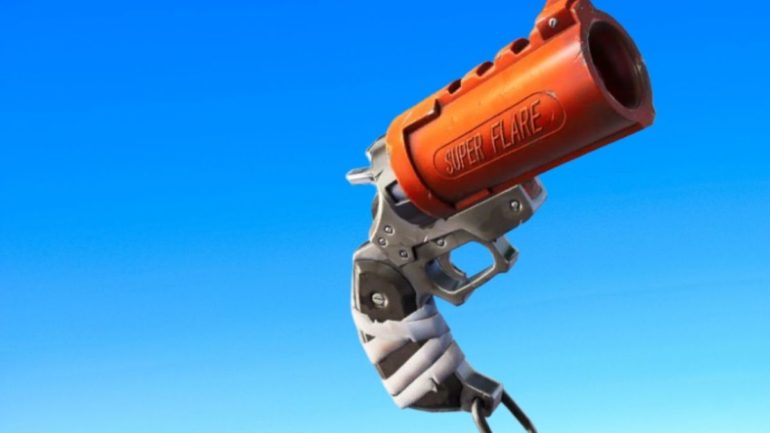 After being out of the game for the majority of the season, the Flare Gun is finally back in Fortnite: Season 6. But where can you find it, and how much does it cost?

For those not in the know, the Flare Gun is a weapon in Fortnite that also acts as a way of pinging nearby enemies. In Season 6, it will also show you where all those pesky animals are. It doesn’t do too much damage to enemies (and you’re more likely to hurt yourself if you use it up close), but it’s definitely a good weapon to have in a pinch.

Here’s where you can find the Flare Gun in Fortnite: Chapter 2 – Season 6, which is a Rare item.

The Flare Gun is a regular loot drop, meaning that it will be available where pretty much all loot usually spawns.

However, there are two NPCs that also sell the Flare Gun for 245 Gold Bars, which feels like a bit too much.

Blaze can be found at the Timber Tent landmark, which is near Sweaty Sands.

Raptor is near the broken airplanes above Coral Castle. However, they are hostile when you first meet them, so you will have to defeat them in combat before you can buy the Flare Gun.

It’s a bit strange that Castaway Jonesy doesn’t sell the Flare Gun, seeing as how he was the one who first used it during a short animation way back in the day.

You can buy up to five Flare Guns per character, with the weapon taking its very own ammo that can’t be picked up elsewhere. An inventory full of just Flare Guns might be something truly toxic to behold.

The Flare Gun was actually reintroduced during a hotfix on May 6th, which is the latest in a long line of old items that have randomly been added back to Fortnite lately.

Speaking of things coming back, if you’re wondering about the Travis Scott skin coming back to Fortnite, you might have a bit of a wait on your hands.