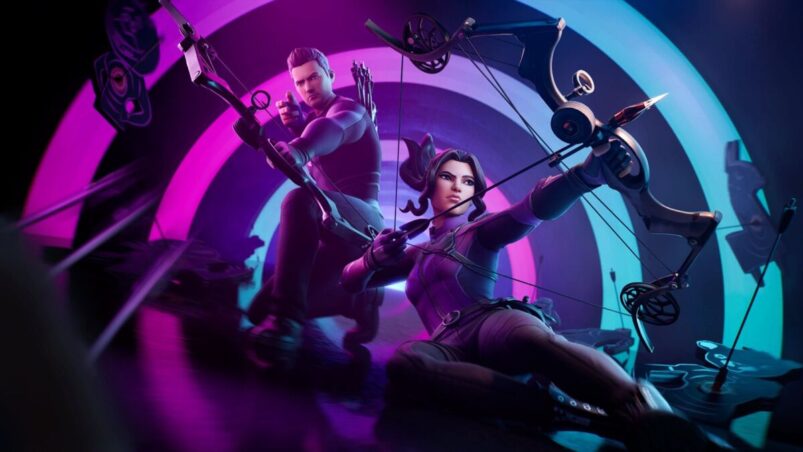 Following hot on the heels of the debut season finale of the Disney+ show, Fortnite and Marvel are once again collaborating, this time to bring Hawkeye and Kate Bishop from the former’s titular show.

This marks the latest in a long line of Marvel collaborations, which started way back in Chapter 1 with The Avengers. In Chapter 3, we’ve already had Spider-Man as a skin with more of Spidey yet to come, so why not throw some Hawkeye while we’re here?

Here’s everything you need to know about the Fortnite Hawkeye skins, which include appearances from Clint Barton and Kate Bishop.

Both Clint Barton and Kate Bishop Fortnite skins were encrypted in the files at the release of Fortnite v19.10.

As you might be able to tell, these aren’t the “official” faces of the actors who portray Kate and Clint in the show, Hailee Steinfeld and Jeremy Renner respectively. This likely comes down to licensing, which would probably cost too much for the real likeness of both actors.

The other cosmetics include the Pickross Bow pickaxe, Aerial Archer Glider, Taut Slicer Pickaxe, Kate’s Quiver Back Bling, and Hawkguy’s Arsenal Back Bling.

Here’s a video of the Hawkeye skins in action:

Players will also be able to get their hands on the Hawkeyes Pickaxe, which will is sold as a bundle exclusive.

Both Hawkeye show skins cost 1500 V-Bucks, which is the same as the vast majority of collaboration skins.

Players will also be able buy a bundle of both the Kate Bishop and Clint Barton skins together for around 2400 V-Bucks, which also includes the other cosmetics in the Hawkeye set.

The Fortnite Hawkeye skins released in the Fortnite Item Shop on January 20th, 2022, not long after they were first found in the game’s files. They will most likely remain in the Item Shop for over a week and then return when there’s some fresh news for the series.