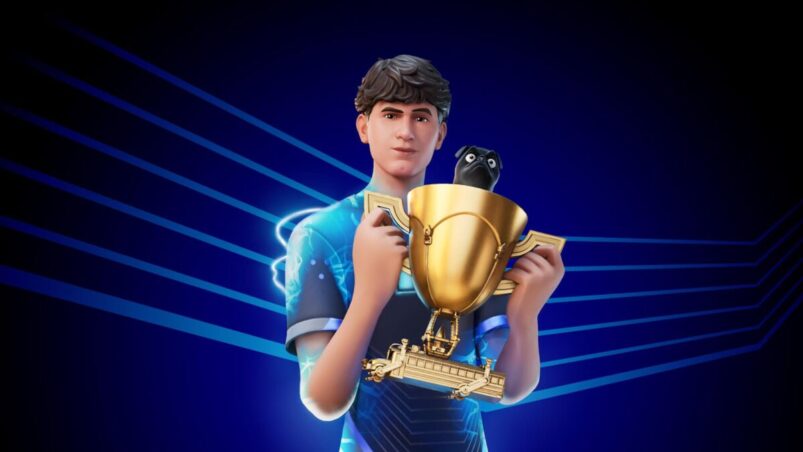 It’s been a minute, but we now have another Icon Series skin coming to Fortnite, and it couldn’t have been a better pick. Bugha, the winner of the first (and only) Fortnite World Cup, is getting his own Icon Series skin.

Available in three different variations, Bugha’s Fortnite skin will be available alongside the World Cup trophy as a Back Bling (also featuring his dog), his famous emote that he performed at the World Cup, and also dual-wielded Pickaxes that celebrate his dog. The man loves his dog.

Here’s everything you need to to know about Bugha’s Icon Skin in Fortnite.

There are three different styles for Bugha, real name Kyle Giersdorf, as previously mentioned, each based on parts of his career, including when he won the World Cup.

It seems that the main style will also have a blue electricity effect, similarly to Lachlan’s, but it’s not clear how this works just yet.

Bugha will be the sixth Icon Series skin based off a popular Fortnite content creator/player, following Ninja, Loserfruit, Lachlan, TheGrefG and Lazarbeam before him.

Here’s every Bugha cosmetic that will be available to buy:

All of Bugha’s styles will be available from one purchase of the skin itself.

When Does Bugha’s Fortnite Skin Release?

Bugha’s Icon Skin will be available from July 20th, 2021 when the Item Shop resets. It will likely remain in the Item Shop for two weeks, if other Icon Series skins are anything to go by.

Bear in mind that Fortnite will have to go through a new update before Bugha becomes available as it’s currently not in the files, hence why it hasn’t been leaked.

The exact price of the Bugha skin hasn’t yet been released, but it should cost 1500 V-Bucks based on the prices of other Icon Series skins in the past.

Players will also be able to buy a bundle with the outfit along with all of the other cosmetics, which should be around 2800 V-Bucks, if it’s based on the prices of other Icon Series bundles.

There will also be a tournament by the name of Bugha’s Late Game, though you won’t be able to earn the skin by playing well in that, just money.

You can find out more about the skin by visiting fn.gg/Bugha.