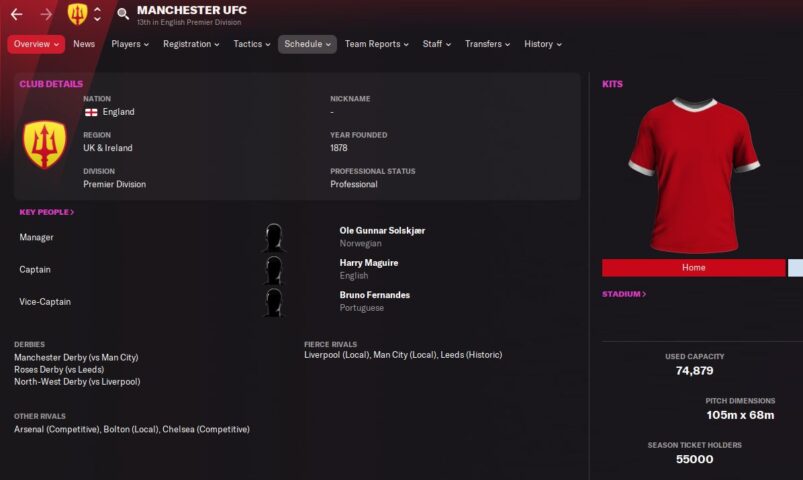 Football Manager 2022 is now out in the wild, with plenty of fans getting to grips with the new squads, updated mechanics, and Callum Wilson carnage. However, there’s one change in the new game that might confuse a lot of players: what happened to Manchester United, and why are they now Manchester UFC?

The simple answer is: licensing and money. As one of the biggest brands in the world, Manchester United tend to be a little bit precious about where and how their name is used, so they took FM’s developer, Sports Interactive, and publisher, SEGA, to court.

Disregard the fact that the name had been used for nearly two decades within Football Manager and Championship Manager without any issues, of course.

A major point of contention for the club was that players could easily get around the lack of true licensing and import their own official Manchester United branding with badge packs and kit packs without the club receiving any money.

“These name changes have been made purely to settle the dispute on a no admissions basis.

“SEGA and Sports Interactive maintain that they do not need a licence to use the ‘Manchester United’ name but have made the change as a gesture of goodwill so that both parties can move on.”

If you’re hoping to see Manchester United “officially” return to Football Manager, don’t hold your breath. While Sports Interactive occasionally collaborate with real Premier League teams like Watford for full licensing, Manchester United would likely be a whole lot pricier to license. That’s without mentioning the potential bad blood between the two scuppering any chances of a deal.

However, between you and I, it’s not impossible to change the name again, as long as you’re playing on PC. Google might be your friend. I was never here.

Football Manager 2022 is available for PC.

READ NEXT: Football Manager 2022: Best Wonderkids You Can Buy For Cheap