Football Manager 2022: Best Wonderkids You Can Buy For Cheap 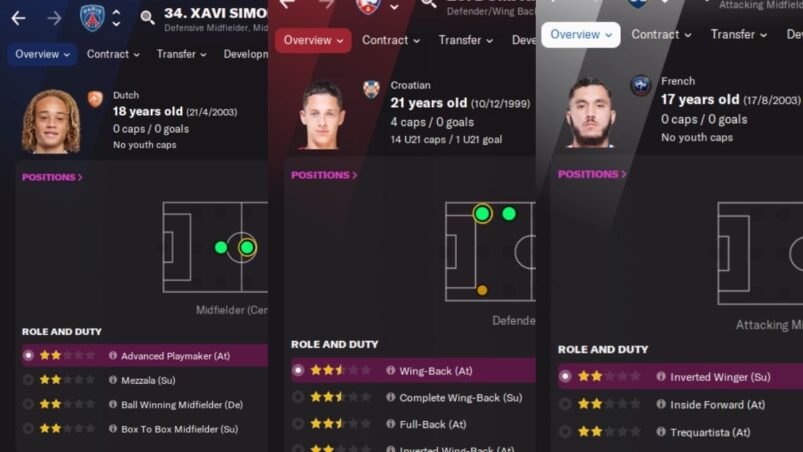 Creating your own legacy is one of the main reasons why people flock to Football Manager each year, and while there are those who love to play as the best teams and simply dominate from the word go, it’s hard to match buying young players on the cheap and watching them grow into megastars. Football Manager 2022‘s wonderkids are no different.

By their definition, wonderkids are players under the age of 21 (though some people like to argue it should be under 23) who have high potential for the future. In other words, they are the likes of Mbappe and Haaland.

While signing either of those players is unfeasible for most, the Football Manager 2022 wonderkids offer you a glimpse into the future of football itself, the young players who will be dominating the game (both FM and real life) for years to come.

Though not every FM 2022 wonderkid listed here will be a world beater, they still offer great value for money, especially as watching them grow into quality players is its own kind of reward. Anyone who’s played FM in the past will know all about the joys of raiding South America for top talent on the cheap.

Bear in mind that not all of these players will be simple signings due to Brexit for Premier League teams. You also have to play them and nurture their talent for them to reach their high potential in Football Manager 2022; they won’t all be immediately amazing.

Okay, so Cherki is by far the most expensive wonderkid on this list but considering he will almost certainly go for £100+ million in a few years, expect some crazy profit at the very least from him. Not the fastest winger in the world, Cherki’s on the ball skill at such a young age is frankly terrifying and will only get better.

Hložek is a phenomenal young Czech talent who tore it up last season, scoring 15 goals in just 19 games, and he can be yours for as little as £5 million in Football Manager 2022. Get him to work on his crossing if you want to play him as a winger, but his brilliant finishing and general technical skills at only 18 make him a serious star striker in the making.

Appiah isn’t the best young player in Football Manager 2022, but he may well be a godsend for a team at a lower level looking to gain promotion. Not only is he transfer listed for next to nothing, but he’s also got lots of room to grow — he just needs the playing time and a lot of patience.

A Norwegian talent who looks like being a part of a golden generation, Sahraoui’s contract is quickly running out at the start of a Football Manager 2022 save, meaning he can be yours for very little at all. Look at that agility, dribbling, and flair and try to say that he isn’t going to absolutely break some hearts on the left wing.

Verschaeren is a Football Manager prodigy whose contract is up very shortly at the start of Football Manager 2022, so you can actually get him for a lot less than his value suggests. Just an all-round solid Belgian baller, Verschaeren will be solid back-up at elite level and maybe even a star if given the minutes to flourish. Probably best to play him centrally.

A part of England’s Under 17 World Cup winning team, Danny Loader is plying his trade in Portugal, but not for long with his contract expiring. Another all-round talent, Loader has a tonne of traits that make him quite the attacker at a young age and can also play pretty much anywhere in the final third. We managed to get him for as little as £2.5 million, you might be able to buy him for even cheaper.

The heir apparent to James Milner’s throne as the perfect utility player, De Winter can play in just about any position on the pitch, though does seem to want to play at the back. Available for less than a mill, Koni De Winter is the ideal stop-gap for anyone shopping on a budget, though does have the attributes to suggest he could be a star in his own right in the future. If nothing else, he will be a more than capable body.

Domagoj Bradarić is a Croatian starlet who played a large part in Lille’s success last season and this solid wing-back could play a big part in any of your future success too. Close to 15 in attributes across the board, Bradarić can cross the ball and take it past players but like most wing-backs in the modern game, he’s not the best at actually defending. Something for you work on, then.

Probably the pound-for-pound bargain in last year’s game, Andrea Papetti returns as a defensive wonderkid in Football Manager 2022, though he isn’t quite as good as last year. Still, for a few million quid, you’re getting a powerhouse in the making who absolutely hates the ball being anywhere near his box. Tall and determined, Papetti is going to be an affordable rock at the back.

Sports Interactive think Strasbourg has a golden generation on the horizon, and the young Saettel is certainly one of them. Best utilised as a winger, Saettel has good technique and dribbling at just 16 years of age, as well as a surprisingly solid physicals despite the non-existent stamina. Put him into your youth setup for a year and then unleash him as a backup and watch him soar. Well, as long as he sorts out his passing, that is.

Nicolò Armini is a traditional centre-back who’s impossible not to love, a true unit who kicks balls away like his life depends on it. You aren’t getting some silky player with Armini, you’re getting someone who can stop you conceding by sheer force and he’s only going to get better/scarier.

Note: starts the save on loan at Piacenza.

Ben Knight is the kind of wonderkid who can truly transform a lower league save if you’re lucky enough to get him on a loan or even stretch as far as your transfer budget can go to sign him permanently. Brilliant with the ball at his feet, don’t let his one-footedness dissuade you from playing Ben Knight as an inverted winger or inside forward on the right.

Note: starts the save on loan at Crewe.

It really seems that someone at Sports Interactive might have just forgotten to change Xavi Simons’ value for Football Manager 2022 — one of the hottest prospects in football available for half a mill? Go on then. Solid all-round, Simons has a little ways to go before he can dislodge the likes of Gueye, but his ceiling is so high that there’s no doubt he will be one of the world’s best before long.

The first South American wonderkid in Football Manager 2022 that you should be checking out, Arezo has the kind of attributes most elite level players could only dream of and he’s only 18. While he’s a little on the short side, his heading and finishing make him absolutely deadly, as does his decent pace and mentals. Pick up for around a mill and watch his value rise as the seasons go by and the goals fly in.

Alright, so a lot of the reason why we’re including Pablo Torre on our list of the best Football Manager 22 wonderkids list is for the sheer novelty of seeing a natural enganche out in the wild. However, he’s actually sought after by elite teams across Europe, and that’s likely down to his absurdly good passing and vision, as well as agility, at just 18. Could become a cult favourite.

A German unit at 6’2″, Linus Gechter has one of the best templates for a young defender you could want in the modern game. Mentally strong at just 17 years of age and with solid technicals and physicals, Gechter is an asbolute bargain wonderkid, especially as his contract is expiring at the start of a save. He might want to stick with Hertha to continue his development, but he will still be worth keeping an eye on as the seasons go by and he blossoms.

Lovingly referred to as “budget Sancho” (which wouldn’t be a bad thing; Sancho was maybe too expensive), Bynoe-Gittens is another Englishman trying to make a name for himself with Dortmund. While solid all-around, he perhaps lacks the natural pace to be the most effective winger around, but he will still absolutely do a job. Get him to focus on his crossing when you sign him on a pre-contract for next to nothing at the start of your save.

Just squeaking in for wonderkid contention at 21 years of age, 22 come January, Julián Álvarez is an Argentine star in the making. Blessed with crazy good first touch, finishing, and flair, there really isn’t anything in Alvarez’s game to flag up as a weakness. He isn’t too strong and his heading is weak to say the least (probably because he’s short), but everything else about him screams elite. He’s too good to stay in Argentina, and he can be yours for very little with his contract expiring.

Football Manager 2022 is available for PC and Xbox.

READ NEXT: Football Manager 2022: Best Free Agents You Should Sign