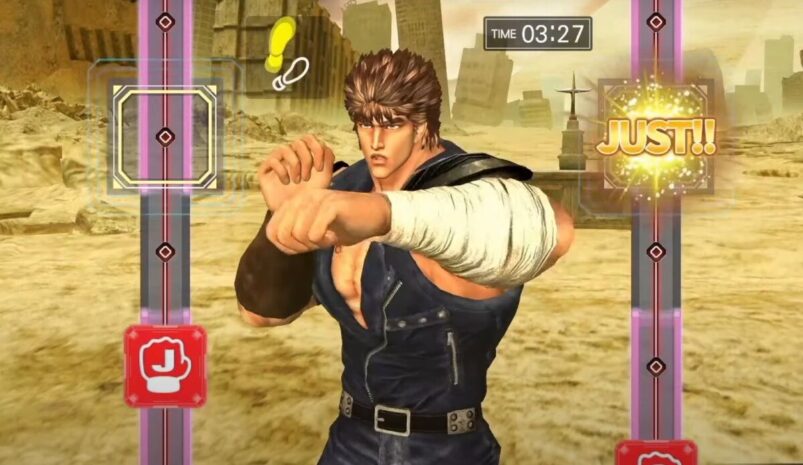 Fist of the North Star is a franchise that appeals to two primal urges within me: martial arts and gratuitous violence. A series that revels in its own ludicrousness, the idea of a new game in the franchise coming to the Nintendo Switch nearly brought me out of my seat when watching the September 2022 Nintendo Direct. That hype immediately dissipated when the game was revealed to be a Fitness Boxing tie-in of some sort that’s set to launch in 2023.

I am already dead.

As ideas go, pairing Fist of the North Star with a game like Fitness Boxing is pretty decent. Series protagonist Kenshiro is a prolific puncher, with his trademark Hokuto Hundred Crack Fist becoming one of the most referenced and homaged moves in anime and manga. It’s the one where he punches really fast then says “omae wa mou shindeiru”. You know the one. It’s the Akira bike slide of punching dudes in the face.

What feels like a kick, or a punch to be more accurate, in the teeth is that this Fist of the North Star game could have been anything when it was first shown, with a port of Ryu Ga Gotoku Studio’s Lost Paradise being my first instinct when the trailer started. Given how close in proximity the direct was to RGG Studio’s own stream, which included three Like A Dragon announcements, a reveal like Lost Paradise dropping on the Switch wouldn’t have been completely ridiculous.

Going from the idea of a new Fist of the North Star adventure, or even just a port of an excellent one, to a boxing exercise game that looks pretty janky going by the initial trailer, is enough to give some whiplash. I don’t know, maybe I’m taking this a bit more personally because my girlfriend started cackling when she saw my hype quickly fade as the trailer went on, but my disappointment is immeasurable and my week is ruined.

Announcing a project like a Fist of the North Star boxing game is certainly an unpredictable one, so kudos for that, but the way it was showcased within the Nintendo Direct, with no build up or context whatsoever, made the announcement feel like a rug pull. Again, maybe this is just a me thing, getting too excited just because I saw my boy Kenshiro without actually knowing anything about the game, but the reveal was deflating to say the least.

This is especially true considering the fact that the Nintendo Direct for the West omitted an announcement that was instead made in the Japanese language Direct: Everybody’s Golf developers Clap Hanz stealth dropped their latest game, Easy Come Easy Golf (which is called Clap Hanz Golf on Apple Arcade), onto the Nintendo Switch. As a worldwide announcement, that would have been perfect for the Direct, while the Fist of the North Star announcement could have been reserved for the Japanese Direct in celebration of the series’ 39th anniversary.

Whether or not Fitness Boxing Fist of the North Star will be any good remains to be seen. Heck, maybe having Kenshiro and the gang shouting at me to punch harder will finally be the motivation I need to start exercising properly. If nothing else, at least I know I’m not the only one who wasn’t exactly thrilled with the announcement.