How Each Fire Emblem: Three Houses Student Is Handling Quarantine 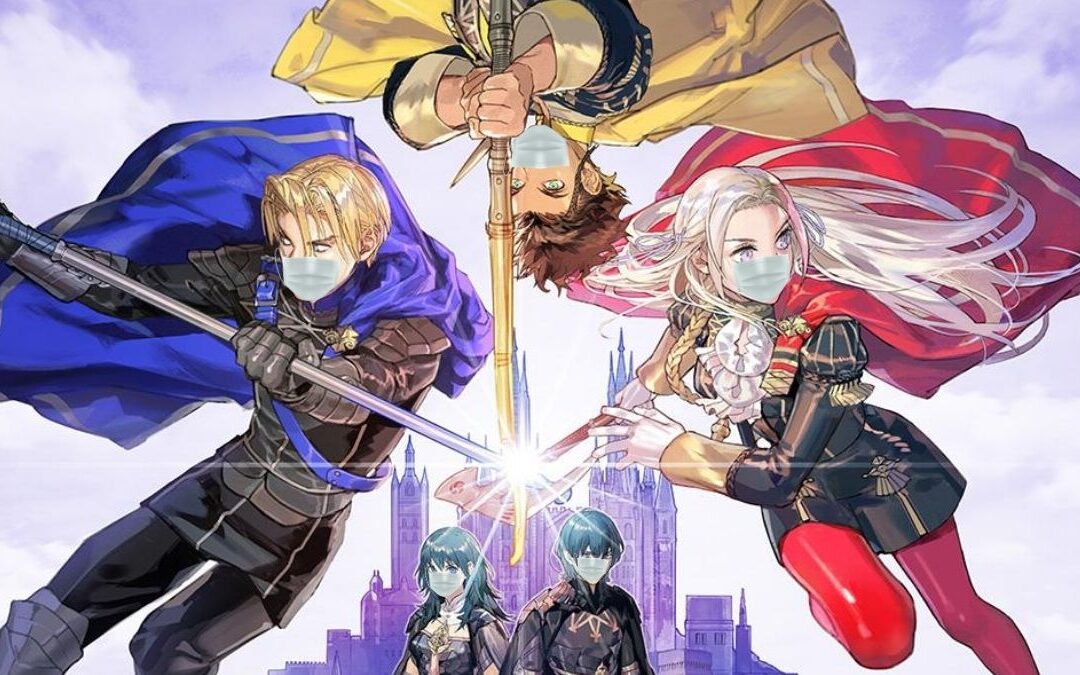 Fire Emblem: Three Houses recently celebrated its one-year anniversary, but a lot has changed in the world since we all first enrolled at Garreg Mach Monastery.

While we all miss the days where the economy was so stable you could get a teaching job after murdering a handful of bandits, time waits for no one. How are our favorite student soldiers, still in school before any sort of, say, outbreak of war and multi-year timeskip, doing in These Uncertain Times?

Edelgarde
Edelgarde was an early proponent of installing lockdown measures and quarantining, vocally expressing frustration with the school administration’s slow and half-measure policies. She rallied Black Eagles house to obey her own parameters for physical distancing and mask mandates, acting independently of school administration. While some faculty were frustrated by the insubordination, few could argue with her clear, well-researched stances.

Hubert
Hubert acted as Edelgarde’s enforcer in her campaign for physical distancing, relentlessly placing hexes on students who did not stay six feet apart or wear facemasks. His attempts to find a spell to permanently cover a person’s nose and mouth have yielded…mixed results. On the one hand, his subjects aren’t spreading the virus. On the other, they aren’t breathing at all. Hubert considers these results “a real mixed bag.”

Ferdinand
Ferdinand experienced a sore throat in April and checked himself into the infirmary. Even though he tested negative, he refused to leave, professing, “I am Ferdinand Von Aegir! I have health insurance, I will not be denied service!” He still has not moved back to his own quarters.

Linhardt
While Linhardt is deeply interested in studying the virus and investigating treatments, the dissolution of in-person meetings has hit his motivation particularly hard. Linhardt is reportedly taking four to six naps per day, which is on average one more nap a day than he used to, aided as he is by “calming herbs.”

Caspar
Caspar had to have a few very serious conversations about how COVID-19 is not a secret invasion, nor is it the sort of threat that can be punched into submission. Guards had to be stationed outside his room to keep him from storming out to find someone to hold accountable and physically punish.

Bernadetta
Bernadetta got the message that classes were moving to remote learning and stopped reading. She has barely had to alter her routine at all, and has never felt more rested or at peace than now, at least until she remembers what’s going on in the rest of Fódlan.

Dorothea
With the opera business completely halted, Dorothea has been suffering a crisis of career and identity. Performing operas over Fantasy Zoom are a poor substitute. She has considered taking this opportunity to get into voice acting.

Petra
Petra returned to her home country of Brigid early in the Pandemic, before travel restrictions were put in place. Brigid, having acted early in implementing lockdown measures, and paying citizens to stay home, has seen incredible success in containing the virus, and are expected to relax distancing restrictions soon. Petra is constantly surprised and embarrassed by how poorly Fódlan is handling the virus, since her own country handled it so well. Go figure!

Dimitri
Dimitri, while frustrated that there isn’t a clear and concise way to stab the virus, has pivoted to monitoring his fellow student’s mental health and well-being. He has slotted into a sort of ‘Mom-Friend’ role, checking in on people, offering to listen to their problems (through their doors, or outdoors far apart while wearing masks, of course), and just all-around be supportive. He is also staying up extra late, forcing himself to work harder and take more classes in his free time. Seems like he’s perfectly healthy in the head and doesn’t need any help himself.

Dedue
Dedue willingly quarantined with Dimitri and tried to do all the essential errands for both of them, so as to minimize Dimitri’s risk of exposure. Dimitri pointed out that if Dedue was exposed, he would expose Dimitri, which caused Dedue to, after three full minutes of silence, admit the flaw in his plan.

Felix
Felix is obeying quarantine. He practices his swordsmanship only, fully masked in the woods and away from everyone else. Like Bernadetta, his routine has changed very little, and he enjoys not having to make up excuses to ignore his classmates anymore.

Ashe
Ashe has taken over greenhouse duties, keeping his hands busy and his mind occupied. He hopes that by demonstrating his dedication to the greenhouse, even in such extreme circumstances, he’ll be fast-tracked to knighthood. And just in case, he’s stolen a few extra weapons to practice with now that no one’s checking on him.

Ingrid
Ever the rule follower, Ingrid has been circulating pamphlets on the proper safety procedures to all of her fellow students, installing hand sanitizing stations, and sewing extra masks. She has filed several requests for full-body bubbles for every student and is adamant about education being remote until safe. She also hasn’t done her own laundry or cleaned her own room since April. It’s about priorities.

Mercedes
Mercedes has dedicated herself to working in the infirmary and treating sick students. Her tireless efforts and dedication to the job have led Monastery staff to follow her orders, making her the youngest head doctor in Garreg Mach history.

Annette
Annette has taken the trend of sourdough starters and baking her own bread. The smell of her baking often fills the halls of the school, and occasionally the smell is actually not that burnt. She’s running out of flour, to everyone’s relief.

Sylvain
Despite everyone’s harshest warnings, Sylvain has repeatedly tried to break quarantine to hook up with a female student. He’s certain that if he and the female student in question quarantine for two weeks between each hook-up, they should be fine. These appeals have been denied and guards have been posted outside his door. 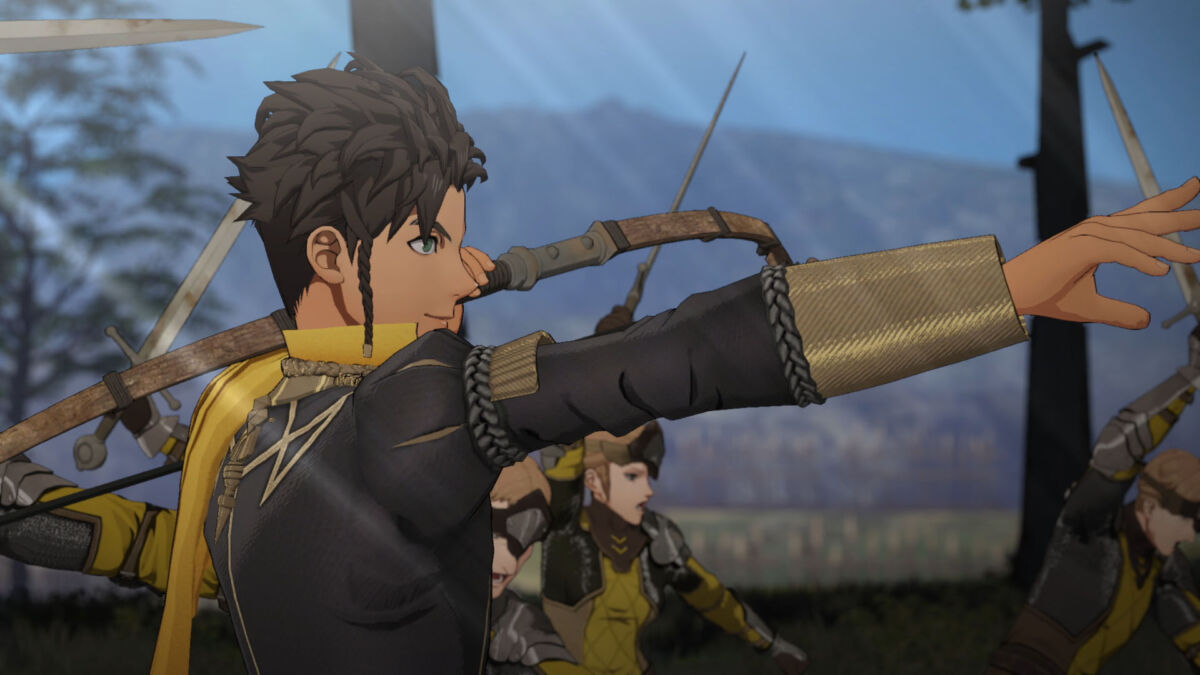 Claude
Claude has joined three DnD groups, tried to start writing a fantasy novel twice, and keeps trying to persuade Hilda to start a podcast with him. He has stacks upon stacks of notes for schemes he intends to implement the moment “this is all over.” He’s taken the quarantine as a chance to perfect a new communication system with the other Golden Deer by knocking on the walls. He is the only one enthusiastic about this.

Hilda
Hilda, without any pretense of having to get ready every day, has not worn anything other than her pajamas in months. She’s doing her best to ignore the news and just live in the moment, which means a lot of passing notes to Claude and pretending to care about his ideas for podcasts.

Lysithea
Lysithea has repeatedly tried to create a counter-curse to force the virus out of a body. So far, the results have been fascinating, but insufficient, and in fact, her new spells are maybe more dangerous? Her diet has devolved into exclusively cake, which she says gives her the sugar she needs to “ignore the ghosts outside.”

Raphael
Raphael, emboldened by all this extra free time, has been cooking and delivering meals to all the other students in his house. It’s always a very protein-heavy meal, which isn’t everyone’s favorite, but no one feels like they can complain. The Monastery’s kitchen staff aren’t helping, and they aren’t sure where he’s getting all these supplies.

Ignatz
Ignatz has spent his quarantine working on a painting of the Goddess Seiros. Just the one painting. A single painting of Seiros. He says he just can’t quite get it right. It’s possible that he just doesn’t know what he’ll work on after he finishes it. So as long as the painting is ‘unfinished,’ Ignatz has something to look forward to tomorrow.

Marianne
Marianne, unsurprisingly, has not been doing particularly great during everything that’s gone down. She refused to leave her room for several months, except to tend to the horses — which led to her moving into the stables full-time. She and the horses are getting along wonderfully, and now have numerous inside jokes.

Leonie
Leonie has been using this extra time alone to train. She trains every single day. She refuses to discuss what’s going on in the world, because it distracts from the training. As long as she trains, everything is fine. Please leave Leonie alone. Let her train. Training is something she can control.

Lorenz
Lorenz, who left the school to quarantine in his family’s palatial estate, has been complaining nonstop about how bored he is, and how, as a noble, it is his duty to be allowed to dine indoors at a restaurant, get his haircut, and see a play. Don’t be a Lorenz.

Flayn
Despite being fairly certain her magic biology makes her immune, Flayn has obeyed Seteth’s safety precautions and is mostly obeying quarantine, only leaving her quarters to go fishing while wearing the proper mask. She’s wearing it upside down, but other than that, she’s doing fine.

Cyril
Cyril is unfortunately considered an essential worker by the Garreg Mach administration, meaning he still has to show up to work every day and clean the school grounds, even though no one is going to classes. He considers it a great honor, and a duty to risk getting infected on behalf of Lady Rhea. There is a daily round of applause at 3 PM for Cyril and other essential workers. His requests for hazard pay have been denied.

READ NEXT: Best Switch Exclusives You Should Play