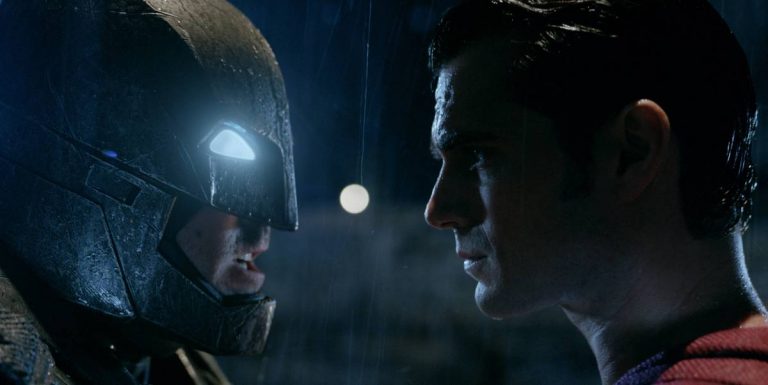 You’re probably aware by now of the hyperbolic reviews Batman v Superman has received, denouncing it as “the film that will make you hate everything” and other such clickbait-y, sensationalist bullshit. This isn’t one of those negative reviews, but neither is it a positive one.

BvS opens up with a scene that we’ve all seen more times than is necessary: Bruce Wayne’s parents being gunned down before his eyes, but this time, there’s symbolism. I should have been left emotional, yet the only feeling I had was apathy, which didn’t really bode well for the rest of the film. With the negative reviews and an image of a downhearted Sadfleck swirling in my mind, I was ready to be seriously underwhelmed by whatever was next to come.

To my relief, proceedings quickly picked up from there, going from first gear to second gear in a flash. BvS only ever occasionally swung into third throughout, however, never particularly threatening to go to fifth, or even fourth. It was as if it was missing something, a key ingredient that would push it towards greatness or maybe just above-averageness. I can’t quite put my finger on what it could be lacking, but director Zack Snyder has hinted that a lot was left on the cutting room floor, opening the door for an expanded, definitive edition at a later date.

Much was made of the casting decision of Ben Affleck, a veteran of the big screen who has been involved in more bombs than he has hits, as an aging, cynical Batman. He is solid here, easily the best performer in a talented cast. His Bruce Wayne is one unlike we’ve ever seen, a vigilante who isn’t afraid of truly getting his hands dirty, even if that means killing. Several times we see Batman cause a few bad guys to go all explode-y with little remorse, which is quite the antithesis of the Bat’s entire character. It’s an odd, jarring decision from Snyder and the screenwriters to portray such a just hero in this way, and it detracts a lot from the immersion.

Superman is the potato of superheroes: You know what you’re getting and it sometimes comes filled with cheese. Henry Cavill is perfectly fine as the last Kryptonian, despite what some critics might be saying. He isn’t a particularly interesting character and he never really has been, at least in my opinion. The much-hyped battle between the two ends up being Pacquiao vs. Mayweather 2.0; all bluster and little to excite, ending before it even really starts to get interesting. The reason for it ending so abruptly is unbelievable, but in a film with so many niggles you just have to let slide, this is another to add to the pile.

That isn’t to say the action in Batman v Superman overall isn’t that engrossing. There were times when I was left with my eyes blazing with excitement, eager to see what a quarter of a billion dollars could do. The final battle with Doomsday (no spoilers, they spoiled his appearance in the damn trailer) is a captivating bit of punching and exploding, even if the big bad is just a shrunken Godzilla. This is when the film hits third gear, but without that vital missing ingredient, it can never quite excel.

As for the other villain of the piece, Lex Luthor, well, he could be the worst to ever make it to the big screen. Jesse Eisenberg imbues no hint of menace into the character, instead playing him as his Mark Zuckerberg character from The Social Network dialled to a thousand with some spritzes of The Joker chucked in for good measure. His jaunty, twitchy performance is at times laughable, making him appear more like a Victorian dandy than a genuine threat. It doesn’t help that his motivations are jumbled at the best of times either.

The script is easily the most inconsistent aspect of BvS, going from standard to rousing and then confusing all within a few sentences. A conversation between Luthor and the Senator is supposed to be foreboding and intense, but all I could focus on for a good few minutes afterwards was this one line in particular that’s just a mess. Ben Affleck also can’t do maths at one point, claiming that 1% is an absolute certainty. Poor guy, he has been hit in the head a lot.

You could also pick holes in the plot all day, but Batman v Superman is one of those so-ridiculous-that-you-may-as-well-just-enjoy-the-ride experiences. You can question quite how a multi-million dollar movie can depend on “visions” and “dreams” to further the plot, but then you’re denying yourself the popcorn escapism that this film flourishes with providing to its audience.

Snyder does a decent enough job in the director’s chair as someone probably perfectly content with knowing he isn’t going to be receiving an Oscar for his output. You know what you’re in for when you see his films, and anyone that goes into BvS expecting a masterpiece is going to be in for a disappointment. Expect loud noises, machismo and supporting female characters to be liabilities, unless, of course, they’re backed by a bitchin’ guitar soundtrack when they finally arrive on the scene.

Despite its flaws, Batman v Superman: Dawn of Justice is an entertaining, worthwhile watch for the most part, even if it does sag in places. It’s one of the most subjective films ever made, so I wouldn’t even take my word for it. Just go and watch for yourself and draw your own conclusions.

And would you look at that, I didn’t have to compare it to Marvel once.