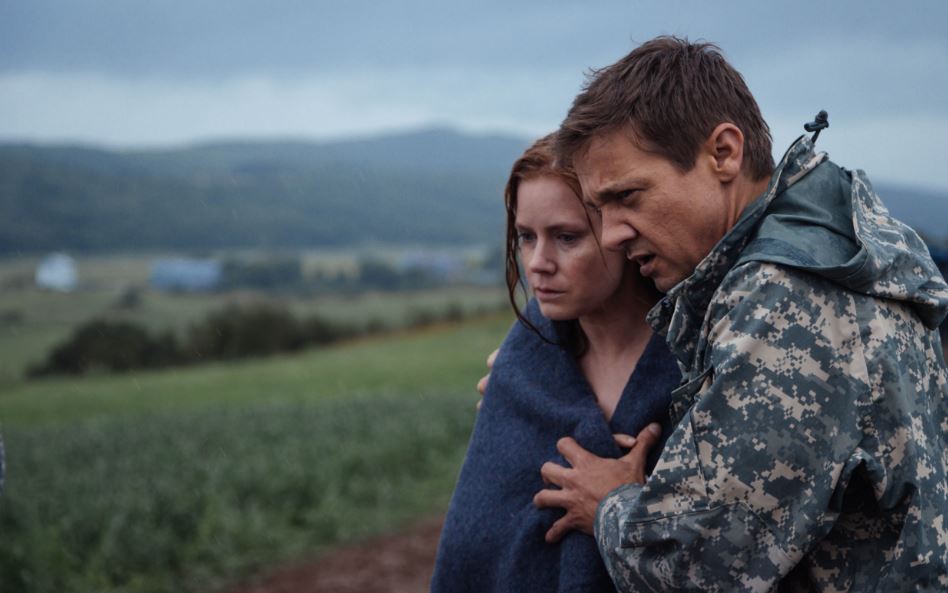 Whenever we’re presented with the concept of alien contact in sci-fi, there’s always an assumption that we’ll be able to talk to them. Sure, you could probably point to examples where this isn’t the case, but generally there’s either a common dialect, or technological aid that translates dialogue on-the-fly. Arrival tries to challenge that.

The concept is brilliantly simple: twelve black obelisks appear all over the globe, and we need to find out why they’re here. Obviously, many questions stem from that: Who are they? How will people react? Are we going to die? In order to try and answer these questions, the military enlists a team comprising of specialists to try and make contact – at the helm, Dr. Louise Banks (Amy Adams), professional linguist.

It’s Louise’s job to try establish a dialogue with the unidentified visitors and, eventually, discover why exactly they’ve chosen to visit Earth. I wish that this was just the opening to the film, but Arrival’s two-hour run time is essentially just that: Louise speaks to the aliens, learns something new, and has a memory of her deceased daughter that leads to a remarkable breakthrough. It’s not necessarily as monotonous as it sounds, and I certainly enjoyed the film – in fact, it’s probably one of my favourites from the year – but don’t go in expecting much more than what I’ve divulged. When it comes to sci-fi, this is certainly more Blade Runner than it is Aliens.

With that out of the way; how is it? It doesn’t surprise me to say that I really loved the film, because I went in with relatively high expectations. It’s certainly a slow burn, but one which will have you gripped for its entirety. You as the viewer want to discover the aliens’ intention just as much as the military does, and so every new revelation delves deeper into whether we need to be weary of them or not. As interesting as Louise’s interaction with them is, the film is just as engaging when it shows how humanity as a whole reacts to the presence of something not from our world. Cultists claim it’s a sign from god, and end their lives. Russian military deems it a threat, and prepares for war. It’s a realistic depiction of how varied a response to an incident like this would be, and the film is all the better for it.

I always like to talk about the soundtrack when it comes to movies, because for me, it’s what makes up a huge bulk of the atmosphere. With Arrival, it’s no different: imposing, ominous strings make up a large segment of the score, which creates an eerie sense of the unknown. In fact, an early shot of a seemingly endless corridor was strangely evocative of Kubrick’s The Shining, which has the Overlook Hotel; a similarly imposing and uncertain place that has the potential for great pain and suffering. It makes you feel uneasy, which – I imagine – is precisely is intended. It could be the end of the world, after all.

Arrival isn’t the perfect movie, though – not by any stretch. It has a lot of interesting things to say, but takes so long to say them that a portion of the audience might have tuned out by then. Slow burns are always fine, but there comes a point at which the pace really needs to be reevaluated: meditation is great, boredom is not. Additionally, the film introduces an aspect very close to the end that ties a lot of loose ends together, but it can come across as slightly heavy-handed and forced. It’s nice to have a sense of resolution, but not if it comes as a detriment to the movie as a whole.

These are just minor grievances compared to how much I thoroughly enjoyed Arrival, though. It’s certainly smart sci-fi, and is a far cry from other alien contact films like Independence Day or War of the Worlds. There’s a lack of blasters and spaceships, but it steps back and looks at what we are as humanity, and whether we could deal with not knowing where we stand in the universe. If you’re like me and enjoy the philosophical side of sci-fi, then you’re definitely in for a treat.