Exhausted Man Is A Very Relatable Game About Being Too Tired 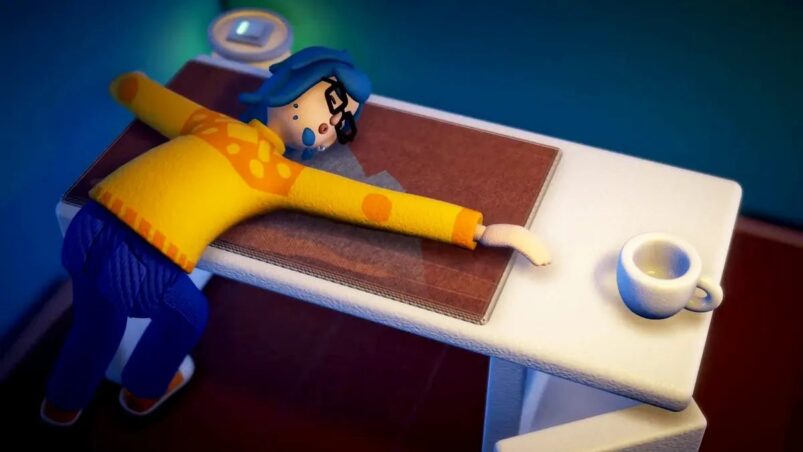 Not many video games are brave enough to feature a protagonist who’s more relevant and easier to relate to, but Exhausted Man does. Literally, you’re playing as a dude who’s too tired to even stand up right, which is a pretty big mood for someone who struggles to get out of bed in the morning and has an attention span shorter tha–is that a bird outside?

A slow-paced physics-based puzzler from Candleman Studio with a limited time demo available now on Xbox via Summer Game Fest, Exhausted Man is about as ridiculous as games get. While the full game might have more to it, the demo follows an indie game developer trying to work out the last few bugs in their game demo before shipping it to release with an indie game festival. How very meta.

The gimmick is that instead of just walking around a room like a normal person and completing tasks, you control the titular exhausted man by slithering around the room like a snake, because you’re so exhausted you can’t actually get your body off the floor. If you want to pick something up off your desk, you’re going to have to slide up the legs of the desk. Think Octodad and you’re on the right lines, only instead of an octopus, you’re playing as someone who needs to renew their antidepressant prescription.

Don’t look at me, I renewed mine last week.

It’s an odd game concept, but it’s hard to not empathise with the core idea of Exhausted Man. No doubt most people can relate to the feeling of slumping out of bed and trying your best to get through the day, so it’s kind of refreshing to see a game that features a character that’s somewhat realistic, even if the ragdoll physics, puzzles and interactions within Exhausted Man quickly delve into baffling ridiculousness.

The level included in the demo features the protagonist working in their bedroom, but the puzzles are solved in rounds. The player can periodically drop new items into the room, like a bed, a computer, some posters and more, then they select a task based on what’s in the room. Some tasks involve positioning objects in certain ways, or holding certain objects at the same time, not unlike a game of Twister. Half the time, it feels like the game is going to say “left foot red”.

After solving a couple of the tasks, you’ll then be thrown into smaller puzzles, which can include collecting coins off a giant version of an object you used, or using the objects required to solve a puzzle to build a ladder and retrieve something. Naturally, the physics and snake-like movement controls make this a bit more cumbersome than you’d like, but that’s the norm with physics based puzzlers. Exhausted Man isn’t really an exception from that.

Whether or not the gimmick will have enough humour and novel ideas to last across multiple levels and hours remains to be seen, but for now, Exhausted Man seems like a unique and quirky indie puzzle game.