The End of the F***ing World: Season 1 REVIEW 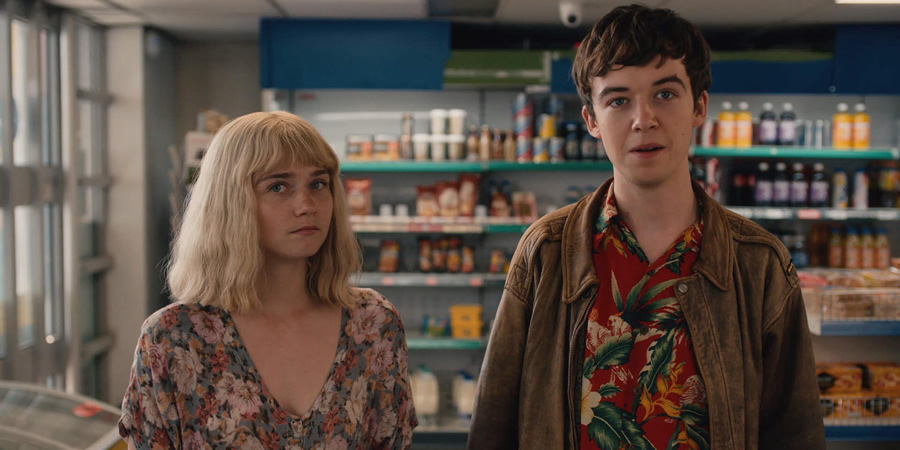 Wow. With a title like that, you can bet I was excited for this new Netflix project. Having come out originally in the UK all the way back in late October of 2017, it has finally received an American Netflix release early in January of 2018.

It’s a story about James (Alex Lawther), a seventeen year-old self-titled “psychopath”, who is dead tired of his suburbanite life, and decides to plan out and attempt his first murder. After Alyssa (Jessica Barden), a new girl in his class, starts to heavily come onto him, he decides she must be the victim. But will spending time together turn James’s evil intents? Will they bloom into love? Will they even come out of this goddamn thing alive?

I’m nineteen right now and this feels like being twenty years older, looking back at some of my high school shenanigans and laughing out loud for hours. Not necessarily because what I did back then matches the characters, but because as a teenager, I have either interacted with people who had similar traits to these characters, or I was suffering in similar ways to different issues. It’s the definition of magical realism. It takes the experiences that I had myself and heard of from friends and knocks them up to 11 on the “insanity” scale. 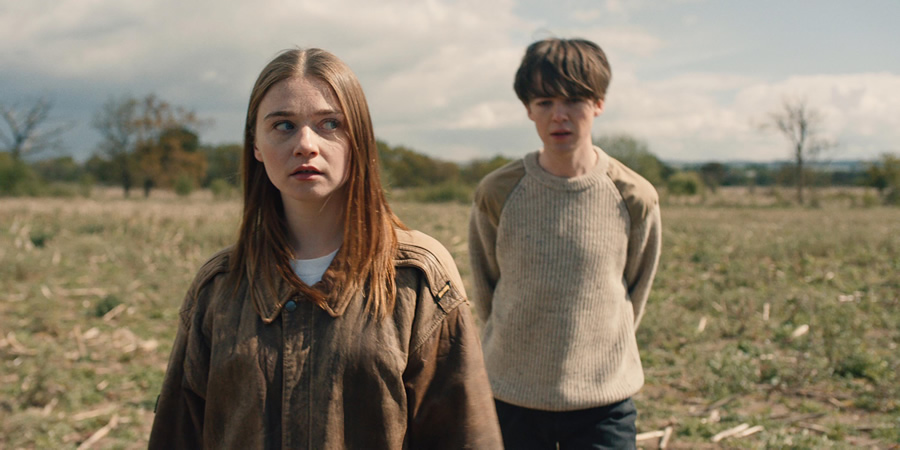 The End of the F***ing World is an ode to panic, youth, the fear of uncertainty and the phrase “I don’t know what the fuck is going on”. It goes as far and as hardcore as it can all the while maintaining both tact and an air of quirky realism.

We’re going to be heading into heavy spoiler territory, so watch it before you go further. One of the great things about this show is that it’s short and direct – with only eight 22-minute episodes, you can watch it in three hours!

The plot goes bad real quick, as James and Alyssa end up stealing things, breaking into property, getting a dog run over, and even murdering a serial killer. They constantly fail to accomplish any goals as they pointlessly meander through the country trying to figure out how to escape the havoc they themselves have caused. And it’s so fun.

Alex Lawther and Jessica Barden are great at portraying pure and unadulterated disorientation. Their spastic nervous ticks, their fantastically timed reactions (courtesy of that snappy British comedy), and their sizzling chemistry all merge to create the perfect broken teenagers.

They spiral ever-so gracefully into chaos and crime, as baffling occurrences continue to plague our unlucky pair until the very end. Even with some of the brief moments of happiness scattered throughout, the show is still wholly drenched in disaster.

Some of the funniest lines are delivered in total earnest by the characters, striking perfect bathos and carrying a strong scent of punishing irony. They’re straight out of a 2004 MySpace profile, but it’s exactly because of that that they feel so real.

I can definitely see some people having a problem with these main characters, though. They’re not exactly rational in their thinking, and there are a lot of drawn out scenes of them walking and pouting. But to me, it all feels like a jab at those kinds of people anyway, so it’s instantly hilarious.

On the other hand, police officers Eunice (Gemma Whelan) and Teri (Wunmi Mosaku) are about as obnoxious as they can possibly be. There’s this constant funnyman/straightman dynamic they’re going with that is way too on the nose and childish to seem real. They’re constantly interrupting each other and stuttering, cursing like fourteen year-olds pretending they’re adults. Also, their dilemma doesn’t even get revealed during the story. 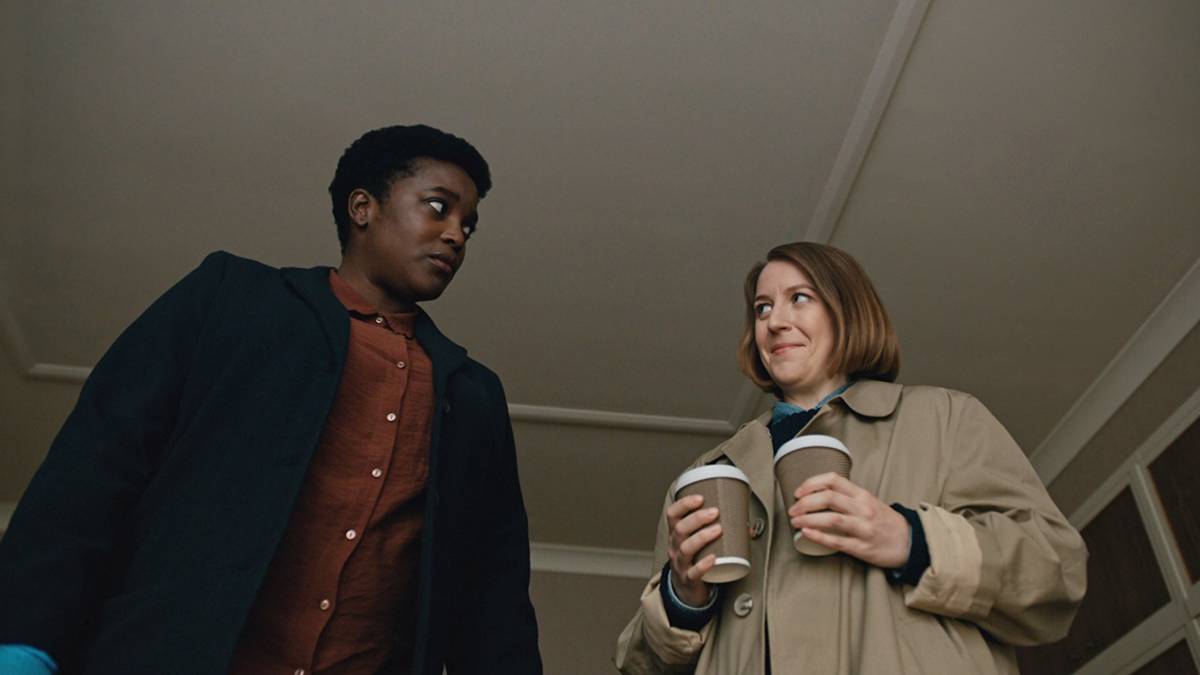 We’re left with vague conversations about “something” happening that Teri is angry at Eunice for, but without any sense of weight or mystery to it, so it just seems like pointless confusion. In fact, I’m pretty sure they used to be a couple, but now they’re on shaky terms and these scenes of them acting awkwardly are just here to provide some spicy chemistry. In a way, it is relevant to the themes that the show explores, but the delivery here is just distracting and a little jarring. Yes, I know they’re a pseudo-couple, but to me, the way they act is simply way too over the top for a show that is able to handle its tone so well with its two leads.

The music, though, is absolutely spot-on. The hearty, heavy guitar riffs and accurate, emotionally wrought lyrics sell the indie-goth-punk attitude of the show and make for excellent sarcastic jokes during some scenes that, for the characters, are moments of crushing sadness. Lucy Tcherniak, Jonathan Entwistle, Charlie Covell and crew are completely aware of the story and world that they’ve crafted, and they’re nudging their shoulder at us the entire way through.

The ending also works well. Having James die felt not only like a logically appropriate ending, but also (as pompous as it sounds) as a symbol for the briefness and fleetness of life. For him, it really was the end of the fucking world.

Sadly, the ending is also very sudden and leaves lots of plot points floating in the air, especially in regards to Alyssa. James gets shot and we don’t get to know if she was arrested, taken back to her parents, nothing at all. Regardless, I think this was also intentional, possibly commenting on death being not only the end of the fucking world, but also of the show. Out of nowhere, shocking, and without closure.

Anyway, this Netflix original show is one you should definitely check out. It’s got quirky drama, engaging characters, and a sense of fun and dark wonder to it.

Verdict
With clever and creative twists and turns, two painfully entertaining protagonists, and enough taste to remain grounded despite its shocking depths, The End of the F***ing World proves to be a tight, striking dramedy that reminds us of the crazy, scary old days.
7
Cultured Vultures is a pop culture website established in 2013 covering all things gaming, movies, and more. We eat your words.
All The News On The Biggest Games