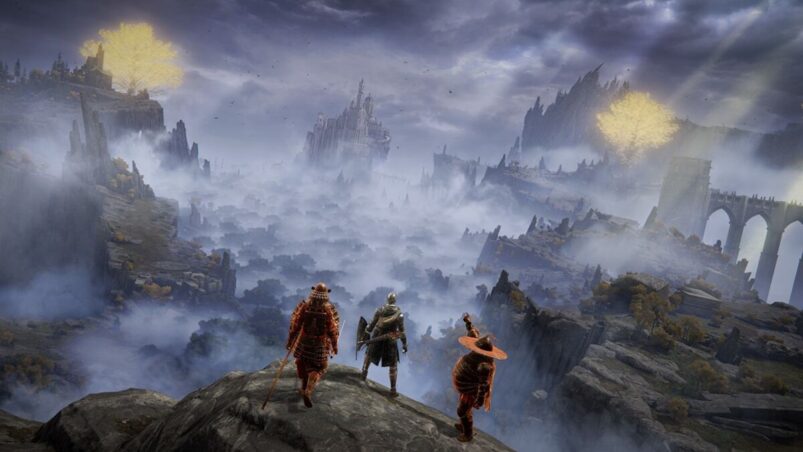 Alright, let’s potentially court some controversy here: even though I want to love the co-op elements of Elden Ring, the latest masterpiece developed by FromSoftware, I’m struggling to enjoy them. This isn’t because of any problems with playing with other players, but because the game makes playing with other people a bit more work than it needs to be.

In order to play online with other players, you have to activate summoning pools at Martyr Effigies, which are typically located outside of challenging dungeons and boss rooms, and use a consumable item called the Furlcalling Finger Remedy. After that, players can see the summon signs players put down who have used a Tarnished’s Furled Finger. You can also use the Small Golden Effigy to send a summon sign to all nearby summoning pools. Once summoned, players are tasked with killing the nearby boss in the host’s world, with summoned players earning a Rune Arc and general runes for their troubles when the boss is killed.

While it sounds confusing, it’s a system that players who are familiar with FromSoftware games will be used to, as previous Souls games relied on summons similar to this. There were no Martyr Effigies, but the principle of leaving a summon sign down outside of a boss door remained the same. You’d put your summon sign down, wait, then enter someone else’s world to do some serious damage to the boss they’re struggling with.

The issue I’m having with this system is that it’s so heavily based on proximity. Whether you’re manually putting down a summon sign or sending out a summon sign to nearby activated summoning pools, you’re still relying on other players being in that relative area in their world, and that they’re looking for help. I know I didn’t summon other players during my playthrough, though who needs other players when your Mimic Tear spirit ash is stronger than the gods themselves?

Right now, the only places I’m reliably getting summoned is in front of the final two bosses of the main quest, but I barely managed to beat Elden Beast by myself as it is. I’m not sure I can deal with the pressure of someone else relying on me to take out the boss when I’m still trying to figure things out, though half the time, the host has already run in and died to the boss before I can get a chance to embarrass myself.

Essentially, I’d want a system in Elden Ring that allows for background matchmaking and summoning to any discovered Martyr Effigy. Having to figure out where people need help on any given day, along with the waiting around to be summoned (because if you go too far away, your summon signs will disappear), makes the co-op matchmaking aspect a bit more annoying than it needs to be.

Perhaps there could be a Large Gold Effigy as an item, which sends out a summoning sign to all discovered and activated Martyr Effigies instead of just the ones in the immediate area, which would allow players from across the game world to summon you in. It would make sure that you can carry on playing the game in your world as normal, while also removing the issue of being summoned into areas you haven’t explored or completed by restricting it to active summoning pools.

I want more matchmaking options like the Blue Cipher Ring, which calls you in as a hunter if a player is being invaded (there’s a lot of systems in this game). You can just keep the ring active while you play, and occasionally you’ll be called upon to help people, but the issue I’ve found is that despite having the ring active for hours, I’ve only been summoned to help through it twice. One time I got disconnected before it started, while the other one spawned me so far away from the host that the invader died before I could see anyone.

To have a feature like a Large Golden Effigy in Elden Ring, which wouldn’t have to come at the cost of the traditional summoning method, would make the co-op experience much more rewarding for someone like me, who’s finished the game and wants to help other players cross the finish line too. Or, I’ll just be the subject of someone else’s “fail compilation”. Either way, it’ll give me more reasons to immerse myself in this wonderful game.

READ MORE: Why Elden Ring’s Limgrave Is a Masterpiece of Open World Design