One foot in the (Lim)grave. 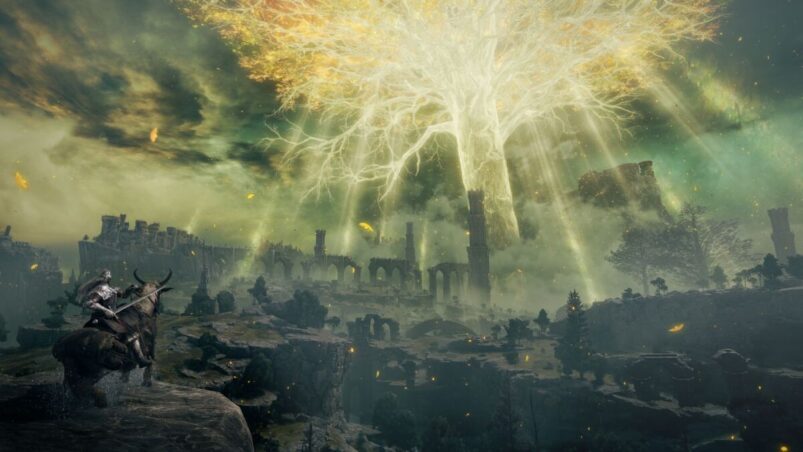 The lessons just aren’t taught in a way that most modern players will be familiar with. While older Souls games focused on encouraging players to focus on boss patterns and combat style, Elden Ring emphasizes exploration over everything else.

Elden Ring wants its players to shake off the standard Souls playstyle (at least initially) to diversify their experience and make it their own. It’s able to do this largely because the starting area Limgrave does such a phenomenal job at laying out the expectations and paths for the game as long as the player is willing to listen and learn.

Elden Ring might teach the player how to fight and jump before letting them loose on the surface but it does little when it comes to addressing the real obstacles in the game. To do all of this, Limgrave needs to begin to teach its players how to approach the Lands Between without traditional tutorial instructions in such a massive game is impressive but how is it done? Here’s why Elden Ring’s Limgrave is a masterpiece for player introductions.

After the player lifts the heavy metal door from the Stranded Graveyard, they’re greeted with their first look at Limgrave and the Lands Between. From standing at this one point, the player can see the first Site of Grace, the giant Erdtree, the Church of Elleh, and Stormveil Castle.

Some of the early points of interest are laid out directly in front of the player. The player can go anywhere but the church straight ahead can feel like just as good a place to start.

Right outside of the door, players will find a Site of Grace and the NPC White-Face Varre, who will explain a bit of the game, such as how the wisps emanating from Sites of Grace can act as a guide. He’ll also remark on the importance of you finding yourself a maiden.

The world is completely open for the player to choose where to go, but, most likely, they’re going to continue straight toward the castle or one of the other immediate structures in their view. However, in doing so, they’ll ultimately be confronted with their first real foe: the Tree Sentinel.

Even Souls veterans have a tough time taking this enemy down from the start with its powerful swings and large health pool. The point of the Tree Sentinel is to tell the player that they don’t necessarily need to overcome every challenge immediately, and can instead put a pin in things and come back later.

When the player eventually gives up on this fight, they have a few options. They might try to go around to other places, but they may run into other challenges, such as a dragon in a shallow lake or stare into the dark abyss of a cave with unknown dangers. More than likely, players will try to run away from the Tree Sentinel toward the only other nearby structure: the Church of Elleh.

In the Church, they will meet a merchant and begin to learn a little about the world through conversation and the notes sold in the merchant’s store. Exploring the immediate area will lead to small cave dungeons, scattered enemies, and a couple of the ruins. These will all help the player begin to get a grasp on combat as well as the beginnings of patterns. For instance, ruins often have lower levels where important rewards such as Ash of War or other treasure.

Or the player will investigate the man-sized statue nearby which will reveal a smokey trial that leads to a catacomb dungeon. This will likely create an association for the player between these statues and their linked dungeon moving forward.

Experiencing these events will likely lead the player to the Stormveil Gatefront where they’ll rest at the Site of Grace and meet Melina face to face. Melina will introduce the player to Torrent, give them access to leveling up, and provide them with their overall objective: Bring her to the base of the Erdtree.

Margit Is An Effective Teacher

Margit, the Fell Omen acts as the first wall the player is likely to stumble across and it’ll fuel their continued exploration of the rest of Limgrave – or even beyond. Margit has a large health pool with a variety of attacks that do a lot of damage for such an early boss. On top of that, his attack patterns are designed in such a way that most players will be challenged to even learn the proper timing for dodging.

In all likelihood, after trying their hand to defeat this menace, the player is likely to give up and explore somewhere else in Limgrave that they passed up in their eagerness to reach the castle, but this is where Elden Ring becomes interesting because everyone’s approach to this predicament will be different.

Limgrave’s greatest accomplishment is that it shows that the player has more options than they might think they do. For instance, Stormveil Castle might seem like it’s the only way to get to the western portion of the map, but there’s another way.

North from the castle gate, there is a destroyed bridge where a Finger Reader waits. If the player talks to her, they will learn about “joining two medallions together at a great lift” and the need to wander through Raya Lucaria. She mentions that the bridge is broken but that shouldn’t matter since the castle is still standing.

Now the player might interpret this as their only way forward is to return to Stormveil to progress or they might check out the broken bridge for themselves and see that the rubble actually leads to a path in the cliffs around the castle.

This will get them to the Liurna of the Lakes and open up the next portion of the Lands Between. Having effectively hopped over Elden Ring’s first wall, the player can find better loot and come back or continue on their journey.

This one encounter taught the player the usefulness of Finger Readers and potentially showed them that there are usually alternative paths if they are willing to look hard enough.

The player might also head in the opposite direction of the castle gate where they might stumble across Murkwater Cave, where Patches hides in wait. If defeated and spared, Patches will offer to sell wares, one of which can help in the fight against Margit. This shackle lets the player know a little bit of Margit’s history, as well as hinting that other enemies might have secret weaknesses that need to be discovered too.

If the player just keeps following the road without getting distracted, it’ll lead them to either Caelid or The Weeping Peninsula, depending on their choice in the fork in the road. One is a hellish landscape where enemies hit hard and fast, while the other is like an extension of Limgrave’s enemy variety and difficulty.

All of these discoveries and experiences build to show the player the necessity of taking the time to explore the world of the Lands Between rather than rushing in one direction hoping to progress. The open world is designed to be explored in its entirety so that players have every tool that they may need to progress.

FromSoftware does a great job at ensuring that these side excursions are just as thrilling and rewarding as most of the main quest stuff, so it never feels like filler. All it takes is one boring side quest to make people want to stick solely to the main events of the story.

Every Path Is Worth Experiencing

It’s these moments where the player is forced to explore that they truly begin to experience the draw of Elden Ring. They are free to discover that adventure awaits around every bend and in every cave. They’ll learn that each castle, fort, cave, or ruin they enter will have something interesting to fight and a reward of some kind. FromSoftware didn’t skimp on the alternative adventures, either.

When the player can’t handle one direction, there are plenty of others to try out. Players might discover the lone lord screaming for help on top of some ruins in East Limgrave. He’ll ask for help to clear his fort for him, so the player takes on this quest and it ends up feeling like an entire castle siege.

Running by stationary crossbows, dodging attacks from a Pumpkin Head, and finally confronting the knight at the top of the fort all enforce this sense of adventure that permeates even the most seemingly minor quests.

This “minor” quest will also reward the player with one of the halves of the Dectus Medallion – an important item for later in the game. This reward would only reinforce the player’s desire to explore every nook and cranny and take on whatever request they overhear from NPCs.

Following the road toward The Weeping Peninsula, as mentioned earlier, will reward the player with an entire side quest to deliver a letter to a father, reclaim a castle from Leonine the Misbegotten, and a few other nice surprises. However, that location is entirely optional as there isn’t anything like mainline keys, medallions, or Great Runes.

The only things that the player will gain are new weapons, tears, magic, and one hell of an adventure. Overcoming the gauntlet that is Castle Morne is like a training course for the much larger Stormveil Castle.

In fact, returning to Margit after all this extra exploring will be the final nail in the lesson to the player: Previous challenges can be made easier if the player doesn’t bang their head against the same wall and instead focuses on defining their own adventure. People will have a hard time tackling this game like they might Dark Souls. Elden Ring requires more experimentation and a whole lot more exploring because bosses are scattered and often expect the player to have a certain level of side experiences before reaching them.

Limgrave serves as a training ground that promises the player that they’ll have an enjoyable time as long as they keep persevering and don’t get hung up on things. It has a little bit of everything, helping to teach the player the different ways to approach this massive world because Elden Ring is different from other FromSoftware projects, which often felt like a string of great boss fights. This time, the adventure is more than the big enemy at the top of the mountain — it emphasizes the slow walk around, over, and inside the mountain.

Limgrave is the thesis for the rest of the game and if the player can conquer this territory, they might just be a Tarnished worthy of becoming Elden Lord.

READ MORE: 10 Games Like Elden Ring You Should Play