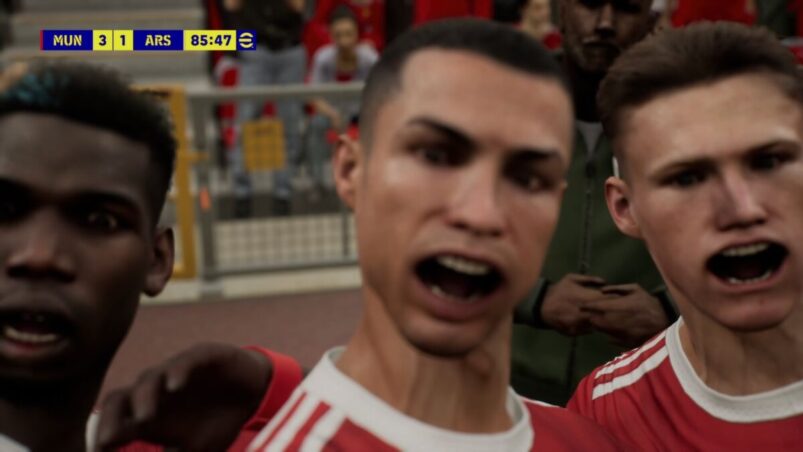 It’s not been out that long, but eFootball 2022, the “reimagining” for the PES series, has already managed to pick up so many negative reviews that it’s the worst reviewed game on Steam of all time.

According to steam250.com, eFootball 2022 is already more hated than the widely despised (and equally unfinished) Godus, Umbrella Corps, and Flatout 3: Chaos & Destruction. It’s worth bearing in mind, though, that this launch version of eFootball 2022 is still a work in progress by all accounts, with more content and changes to come over time.

However, with Overwhelmingly Negative reviews from almost 4000 reviews at this time of writing, the PES faithful hasn’t exactly adopted the free-to-play conversion of the iconic football franchise so far. From terrible graphics to dodgy animations to it just generally feeling bad to play, eFootball 2022 has got a long way to go.

Here’s a selection of some feedback so far:

“I played a few hours and it isnt that bad as people makes it out to be though this does feel like a half-finished product or a demo if u can call it. I hope Konami patches this game up and fixes it. It isnt all that bad but the controls feel odd at times. But the server quality seems better. But WHY THE F WOULD YOU LAUNCH A GAME AT MAX RESOLUTIONS OF 720P AND 900P RESPECTIVELY. THE PITCH LOOKS SO CRAP” – Fire.Dragon.King

“This is a joke.
The worst football game I ever played.
It simply is a mobile game.
The ball weighs 100kg, the contacts between players are chaotic, nothing feels right.
It’s a shame.” – GaryTheSnail

“This game is by far one of the worst games i played. Only 1 mode where you choose a team for online play (only 1 challenge atm) and can’t choose another one ever again. THE CONTROLLER is not customizable even tough you think it is, but you change buttons and either doesn’t do anything or randomizes what you have chosen. The player movements are way too sluggish and play doesn’t seem to flow at all even if you get all passes right… Jesus, this should be considered alpha stage or something near that… FIFA is bad, but for you to get the idea, I would still rather buy FIFA (wont) then play this one FREE! Wasted space in my SSD. Uninstalling!” – -NanT-

It’s not just PC where eFootball 2022 has been struggling, though — it’s all platforms that are flattering to deceive.

Social media has also been quick to pile on the struggling eFootball 2022, with the official hashtag on Twitter just being memes, glitches, and rather unflattering screenshots wherever you look.

Here’s some of football’s most iconic players drawn from memory:

I once said a few weeks back that #eFootball2022 was a 'competitor' to FIFA, after seeing some of the stuff today, I would like to apologise. I was naive, wrong and deluded.

My nephew could design better graphics than what we've seen today 😂 pic.twitter.com/SSSRwXGMWo

Drawn from memory while also intoxicated:

Ohhh hell no!!! Sad that this is what they've produced!! #PS5Share, #eFootball2022 pic.twitter.com/mubhgih9KG

lol downloaded #eFootball2022 this morning and found out eveything I needed to know in the first 5mins of the first game. RIP Pro Evo, you were beautiful once upon a time :( #ps5share pic.twitter.com/NiQrf0JaOo

And generally broken limbs (there’s a lot of this):

Konami you really shouldn't have released this in this state. This is bad… I mean really bad.. Like bad bad bad #eFootball2022 pic.twitter.com/6YYDR8XnmT

There are lots of other complaints online as well, ranging from the inaccessible UI, terrible colour choices, and the game generally being a step backwards. While the change to Unreal was bound to cause some issues after so long on proprietary tech, eFootball 2022 has had a nightmare so far.

It’s worth stressing here that while it’s not in a great place at launch, eFootball 2022 is going to be changed a lot from now until whenever as the game is just on stage 1 of its roadmap. Still, Castolo and the lads didn’t die for this.

READ NEXT: eFootball 2022: All Clubs Available At Launch