Earth Defense Force: Iron Rain shakes up the series at its core, and still manages to be a decidedly great EDF game. 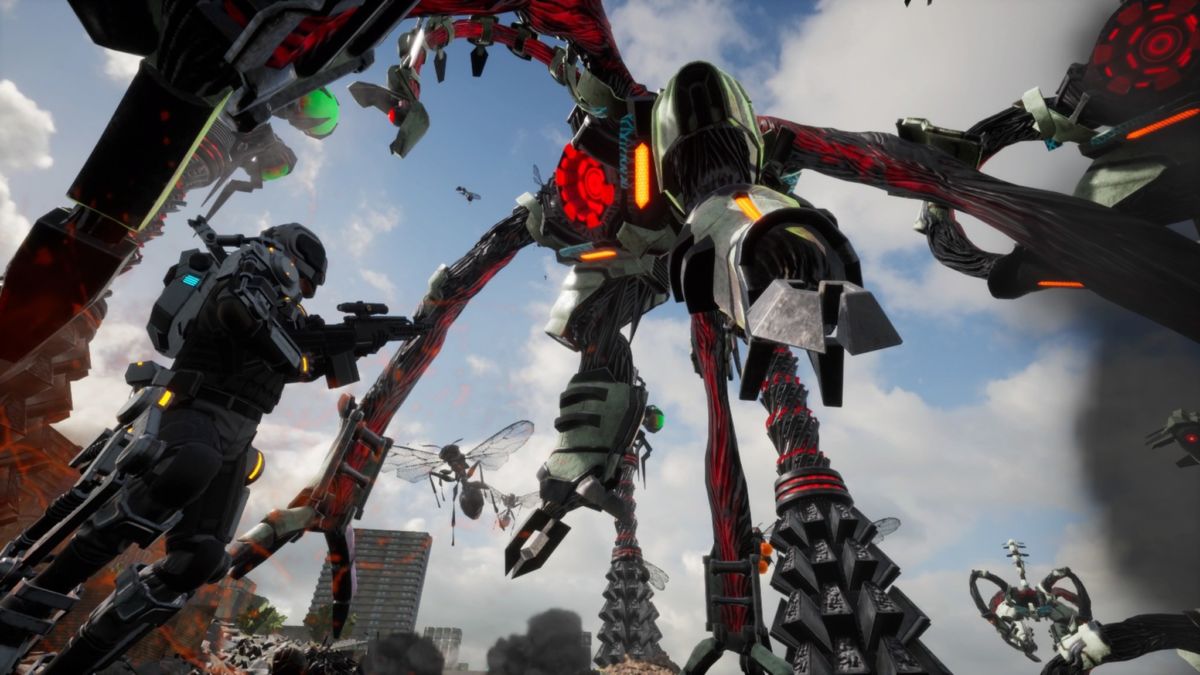 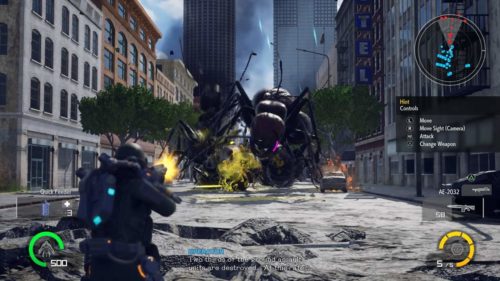 Only four months ago, D3 Publisher released the fifth entry in the EDF franchise in the West. It was a bold reboot full of fun takes on iconic EDF imagery and gameplay, all while retaining what made the games great. With Earth Defense Force: Iron Rain, Yuke’s took the EDF you knew, and threw it out the window in favor of a wholly new entry that manages to evoke the same aura of its predecessors while also being the hardest yet most accessible EDF game to date.

Where EDF5 was yet another reboot of the alien invasion story, Iron Rain kicks you right into the thick of it. It’s the year 2033. Most of the world is either inhabited or destroyed by the alien creatures, and the Earth Defense Force has shifted from being international heroes to more of a ragtag crew of mercenaries. Rather than defend all civilians, benefactors and their hometowns have become your top priority. Because of this, survivors outside of the EDF have turned to looting and crime. In the world Iron Rain creates, survival comes before all else. 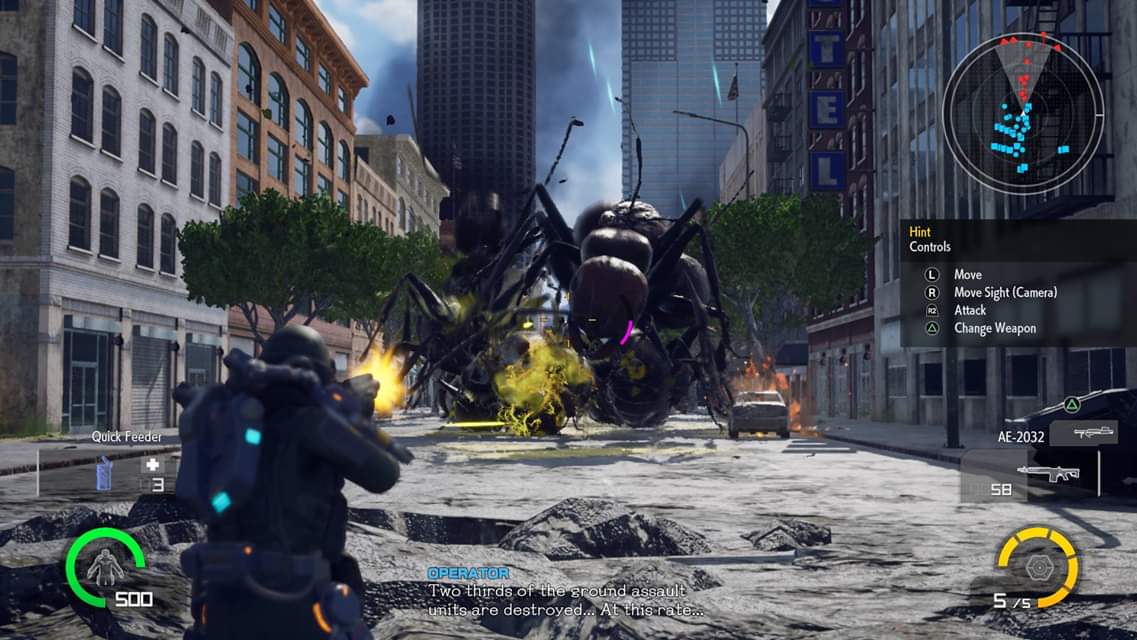 While you’ll face off against familiar fiends such as the giant ants and mechs the series is known for, new creatures have come to Earth to snuff out the remains of humanity. Enemies like the 40-stories-tall Gargant do well to intimidate and with a huge focus on challenging the player this time around, it will stop at nothing to crush you and your entire team beneath its robotic feet. Get used to a Mission Failed screen as you tweak your loadout for each mission.

The class system has been completely done away with and is replaced with the all-new PA-Gear (Physical Augmentation Gear) system. Now you can create a loadout in the most accessible class customization system the series has seen to date. You can mix a Wing Diver-inspired PA-Gear with a shotgun and a grenade launcher if you like. Or you can saddle down a simple soldier PA-Gear with a minigun and portable shield. And despite having familiarity with the mainline series’ class system, swapping loadouts around never felt wrong. There was a point where I needed to take down a flying enemy, but I did not want to relinquish my prized overpowered shotgun. So, I did what any sane man would do: equip the Wing Diver PA-Gear and fly straight up to the alien menace to introduce them to the magic of buckshot. 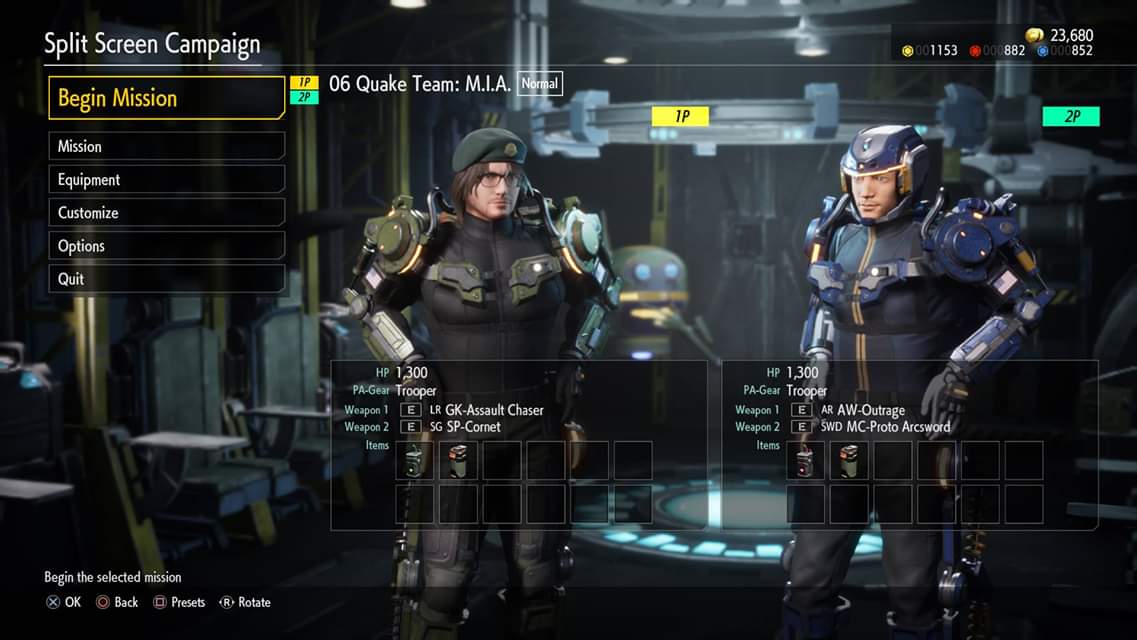 On the subject of weapons, Yuke’s once again broke the rules and removed weapon pickups. They’re now tied to story progression and achievements and are bought with coins and gems obtained through completing missions. This is great because it cuts down the grinding associated with obtaining the best weapons in the game and introduces the world to the concept of gems.
Gems are a power source for the people of 2033, giving them not only immense value to the game’s robotic shopkeeper, but a place in the new and improved story, as your character is in possession of the only PA-Gear able to utilize this post-apocalyptic power source. As a result, you’re given the ultimate power known as Overdrive. Overdrive is a new mechanic you can activate once per mission where you pull power straight from the gem on your back to gain enhanced movement speed, reload times, fire rates, and an infinite supply of energy (which each PA-Gear has a different use for, such as flying or evading).

The PA-Gear System and Overdrive boldly push EDF: Iron Rain worlds apart from the series roots, differentiating itself entirely from its predecessors to create something fresh that fans and newcomers alike can appreciate. And if that doesn’t draw you in, there’s also character customization. 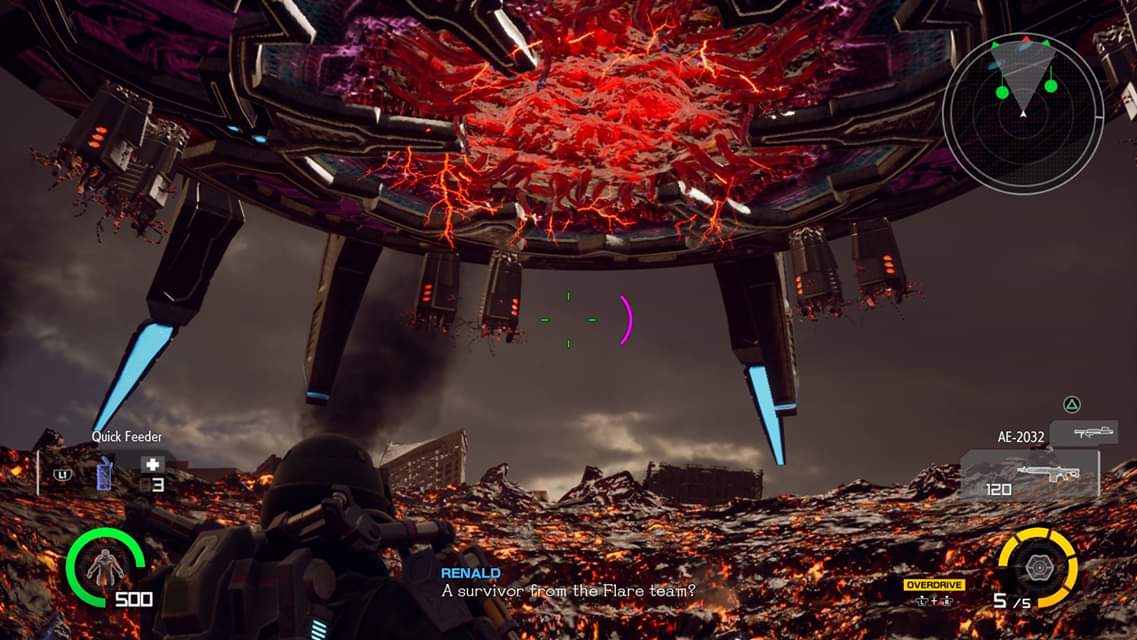 Yes, as seemingly the last Japanese game series yet to get one, Earth Defense Force finally has a verifiable character customization suite. While base creation features such as hairstyles and preset face selections are lacking, it’s the clothing and accessories that shine through, creating a vast expanding closet to customise your ultimate Earth-defending warrior with. Whether creating a bug stomping Guy Fieri or simply an EDF version of yourself, as I opt to do, Iron Rain turns the focus on the player for a sense of connection that I never experienced in an EDF game before.

The Overdrive PA-Gear nets you the nickname “Closer” so your new personality-packed teammates can amp you up/jeer you, while the enhanced difficulty spike and focus on survival give you a sense of urgency as the new over-the-shoulder camera puts you right into the action with your fully customized Earth defender. Cutscenes frame the severity of Earth’s depopulation well, while seeing the carnage of EDF gameplay through the lens of your self-made character puts a new perspective on the series that Iron Rain loves to exploit. 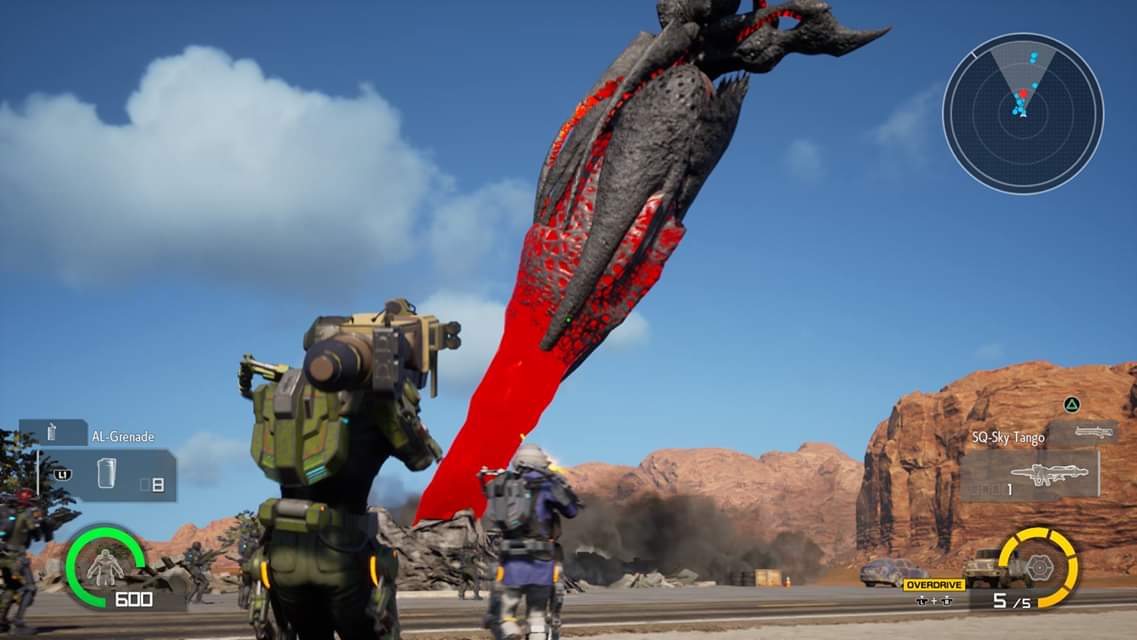 Earth Defense Force has always had impressive scale as you fought giant building sized monsters and motherships through soon-to-be decimated cities. But now through the eyes of a human, seeing such scale puts an impact on your surroundings. Entire cities buried in dunes are no bigger than they were before, but now the impact of something so cataclysmic is brought to light. Iron Rain won’t ruin the joy of prior EDF games, but the grim presentation is immediately noticeable and refuses to let up even when things inevitably get wacky, as EDF is wont to do.

As always, EDF is great fun alone, but it’s even better with a friend. Now that weapon and armor pickups are nixed, grinding is less substantial and helps you keep the pace as you tackle higher difficulties in co-op. And you should. Split-screen multiplayer hasn’t gone anywhere, while online multiplayer remains an option for your friends in different area codes. On top of that (and a series first if I’m not mistaken), EDF: Iron Rain has a competitive PvP multiplayer mode, perhaps made to simulate the raider battles found in the campaign. 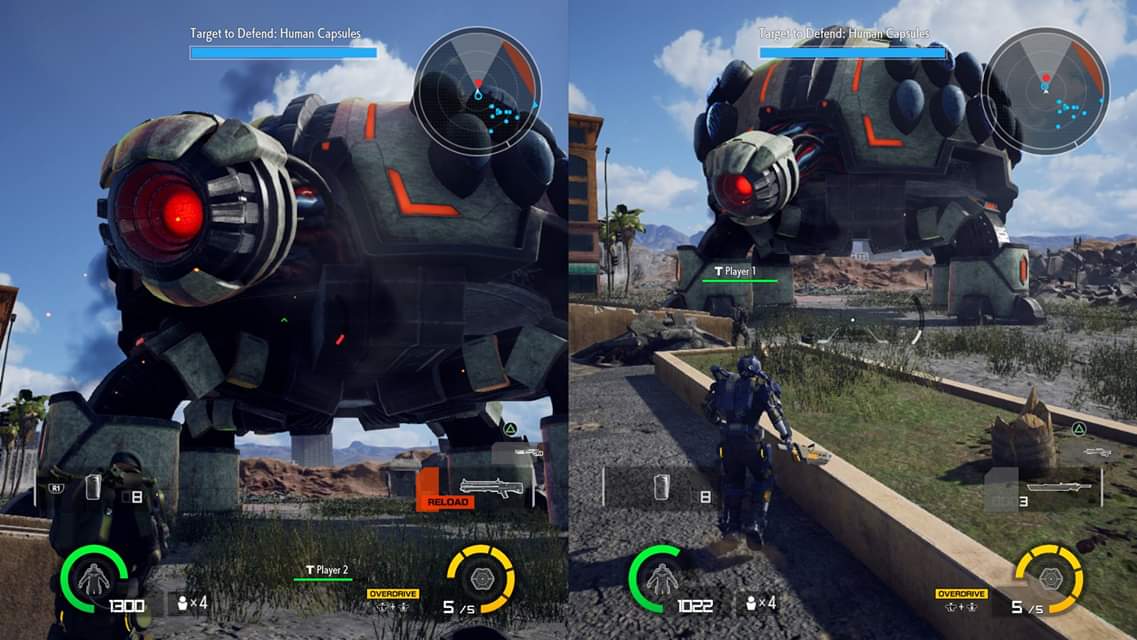 Now series veterans need not apply, but as most of them know, Earth Defense Force does not have a reputation for running at smooth framerates. With the hundreds of enemies and effects on screen, especially during later levels, Earth Defense Force: Iron Rain cracks under the pressure just like all the others. It’s definitely still playable, and I’d say it runs even better than 5, but don’t be shocked when everything starts lagging like a bad hangover. At this point, poor performance is honestly just part of the series’ charm and can be looked past by most. Further nitpicks like the lack of subtitles mid-game and the conversion of grenades to score damaging “Items” are regrettable but did little to turn me off of EDF: Iron Rain.

Ever since EDF 4.1, I thought this series had reached its apex. EDF5 went ahead and proved me wrong, planting seeds of great promise towards the future of the series. Four months later, Earth Defense Force: Iron Rain came out guns blazing with a bold new take on the series and completely won me over. I urge fans to give this new direction a chance, and newcomers to start here if they’re unsure of the class-based grinding of prior games.

Verdict
Earth Defense Force: Iron Rain shakes up the series at its core, and still manages to be a decidedly great EDF game. Character creation and the PA-Gear fit right in and offer a newfound sense of personalization and freedom, while the grim presentation and heightened difficulty will keep you engaged throughout. It’s a real gem.
8.5