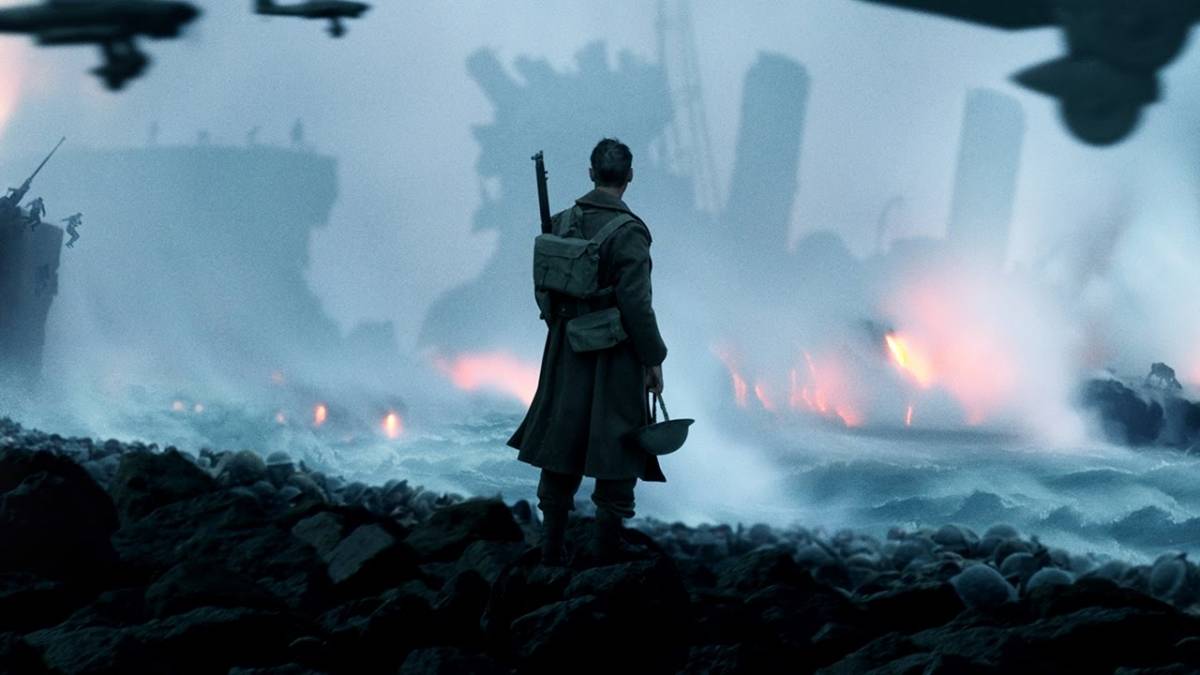 Dunkirk opens without pomp or fanfare – a few lines of historical context establishing the dreadful circumstances surrounding what we’re about to bear witness to before they just…start.

Beginning on land and following British soldier Tommy, Dunkirk is only ever concerned with what we as the audience would see, hear and be aware of if we were right next to the subjects of the current scene. Enemy fire comes from offscreen soldiers, unseen U-boats or the inhuman screams or lumbering buzz of dive bombers and Heinkel bombers, respectively. Tommy is the closest thing the film has to a protagonist, but his often-silent interactions with the weary and battered troops around him serve mostly to get us to the next piece of visual or audio context.

I hesitate to use the word exposition there because, in true Nolan fashion, Dunkirk does not tell its story in a traditional manner, either in content or in sequencing. Much the way Inception and Interstellar grappled with time dilation and relativity and Memento dazzled us with its bizarre-but-effective non-linear structure, so too does this film play with linearity and sequencing. With anyone else but perhaps Tarantino this might turn out terribly, but Dunkirk gets away with it because it is done in service to the central goal of the film – to tell the story of the event as a whole, not the story of any individual.

Aside from Tommy on the beach, the film has two other principal perspectives – Mark Rylance’s civilian mariner Mr. Dawson and Tom Hardy’s RAF pilot, Farrier. Both characters contribute in their own way to the overall scheme of the film – Mr. Dawson, his son and another boy George man his boat as they cross the channel to save as many of the stranded as possible while Farrier and his wingman splash German fighters and bombers in a desperate bid to prevent them from releasing their payloads on their fleeing comrades.

These two viewpoints, combined with Tommy’s desperate bid for survival amid bombing strikes, U-boat attacks and unseen German riflemen (not to mention internal strife among the increasingly desperate allied troops) serve to create a full, at times documentary-like picture of the Battle of Dunkirk, with each character acting as a representative of their respective theater of the battle. Even the familiar faces like Rylance, Hardy, Cillian Murphy and Kenneth Branagh’s Commander Bolton take a backseat to the battle itself – the top-notch cinematography by Hoyte van Hoytema (who also was the DP for Interstellar) and haunting soundtrack by Hans Zimmer are the true authors of your emotions as you watch everything unfold. The characters are there primarily for things to happen to, around or because of solely for the larger purpose – otherwise, Nolan and crew let the shots do the talking.

This is especially evident in the air battles, which were for me the most effective sequences in the film, and not only because they contain some gorgeous aerial photography. Farrier’s flight of three Spitfires, later stated by Mr. Dawson to be the best planes of their kind, nonetheless find themselves limited on fuel, numbers and dogged by a seemingly never-ending parade of German aircraft. No matter how many they take down, more will come – they are only delaying and surviving with what they have.

It’s a fantastic microcosm for the situation as a whole – the British, French, Belgian and Dutch troops at Dunkirk are outnumbered, outgunned and barely scraping by as an overwhelmingly superior force closes in, picking them off one by one. A small bit of dialogue midway through the film drives home that the navy and RAF have pulled most of their support due to heavy losses, making the valiant efforts of the British civilians and pilots like Farrier all the more commendable and compelling.

Anyone with knowledge of history or access to Google should know how this event played out as a whole, but the foregone conclusion of the astounding rescue manages to still feel like it might be up in the air, somehow. This occurs only because of the astounding balance Dunkirk manages to strike between not telling a traditional, character-driven linear narrative while still making you feel tense and invested – fiction and fact blend to create a unique immersion where you don’t quite believe you or anyone around you is safe at any moment.

If I have one complaint about this film, it is this – what little dialogue there is often finds itself drowned out either by music or other sound. While this didn’t impact the immersion factor much given the environment, it did occasionally leave me never knowing a character’s name or confused for a few seconds until the thing the characters were talking about was demonstrated visually. It is this visual redemption of sorts that prevents this from being a larger issue – what is lost in dialogue is almost always made up for by being told through visual storytelling instead. 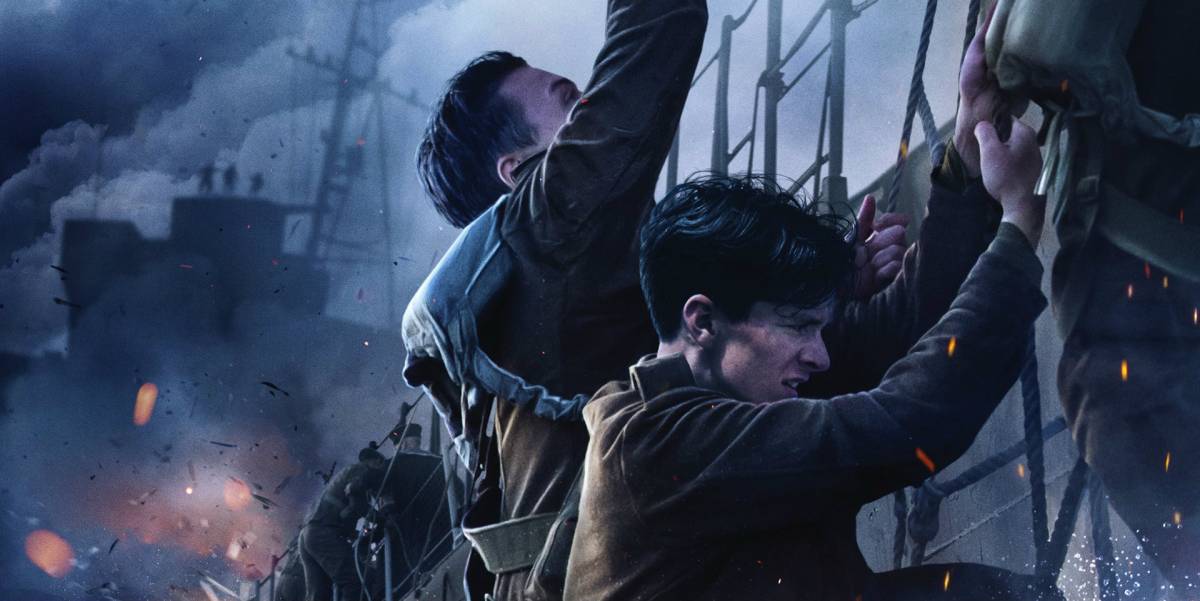 Make no mistake, this is no Saving Private Ryan or The Longest Day – you are not meant to get the backstory of each character and follow them on their arc through the horrors of war – you’re just one more scared, confused boy among 400,000, one more outnumbered RAF Spitfire jockey, one more brave volunteer sailor on a tiny wooden pleasure cruiser, and you’re at the mercy of a whole lot of things you can’t control. All you can do is survive.

Let go of your expectations and traditional notions of what drama is in a war film, and Dunkirk will show you a unique and compelling portrayal of an oft-ignored colossal Allied defeat that nonetheless manages to produce moments of fear, tension and bravery typically associated with the genre. I was getting misty-eyed with patriotic pride by the end, and I’m not even British.

Verdict
With a dedication to excellent "show don't tell" presentation, stunning cinematography and a downright scary soundtrack and score, Dunkirk succeeds at putting viewers in the thick of an unsung but no less dark time of the Second World War, never quite letting you feel safe until the credits roll.
9
Cultured Vultures is a pop culture website established in 2013 covering all things gaming, movies, and more. We eat your words.
All The News On The Biggest Games