There's no limit to the match-ups. 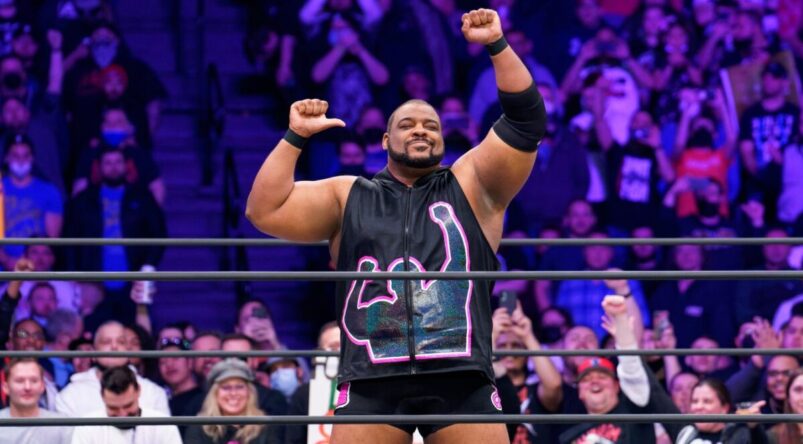 The Forbidden Door has recently been smashed open with the arrival of not just “Switchblade” Jay White but also the colossal debut of Keith Lee, who made his in-ring return after being released from WWE. Lee faced off and defeated Isiah Kassidy to qualify for the Face of the Revolution ladder match, setting himself up for a big future as part of the AEW roster.

Lee quickly became a WWE fan favourite during his tenure in NXT, becoming the North American Champion and NXT Champion at the same time, even being voted NXT’s breakout star of 2019. Lee had incredible matches against Adam Cole, Johnny Gargano, and Finn Balor, which cemented NXT as the standout brand in WWE.

Keith Lee is going to attract attention on the roster with his dominating physique and strength, alongside incredible agility and speed which is rarely ever seen in bigger wrestlers. He’s going to be a threat to the entire roster over his career in AEW, but where should he start?

Wardlow is becoming a fan favourite in AEW with his incredible physique and strength, through his work as the strong, silent type character alongside MJF. Recently, he has only faced off with smaller, weaker opponents who he has mopped the floor with in mere minutes, but Keith Lee would prove to be a challenge for “Mr. Mayhem”.

The seeds of dissension have been sown between Wardlow and MJF over the past few months which is ultimately leading to Wardlow turning on MJF and making a name for himself on his own.

Once MJF is in his past, he’ll need new enemies — who better than Lee? These two could easily put on an incredibly physical matchup, but with the added flair which is key to a great heavyweight bout. I can immediately picture spots such as Wardlow gorilla pressing the huge Keith Lee, and of course Lee Spirit Bombing the life out of Wardlow.

It’s shocking that these two incredible wrestlers never met one-on-one during their tenure in WWE, as the only time the two shared the ring was during the 2020 Royal Rumble.

Black and Lee are two of the most talented wrestlers in the world today and have two very different styles. Lee has the power and strength advantage, however Black has the quick, hellacious kicks and agility that could give him the edge over Lee.

The two contrasting styles would blend together flawlessly as Black would have to whittle down the powerful Lee with a series of kicks and strikes, whereas Lee would have the advantage from the outset because of his sheer strength and power.

It’s a shame Lee and Black never stood one on one in the ring, so hopefully AEW rectifies that very quickly as the two are bound for greatness.

The Winner Take All match between Adam Cole and Keith Lee at NXT’s Great American Bash 2020 easily stole the show and crowned Lee as both North American Champion and NXT Champion.

The match was fantastic, but there was something missing: the atmosphere. The match took place during the pandemic era, meaning that the crowd was made up of other WWE talent rather than the usual, hyper wrestling crowd, who are integral to building atmosphere

We already know how well Cole and Lee can wrestle and both of them deserve to share the ring in front of a packed audience with cheers and boos raining down from the crowd on high.

They could easily tear the house down once again, and if Keith launched Cole into the crowd out of nowhere once more, no one would complain.

These two have only faced off once in PWG back in 2018. Since then, both men have grown and evolved to another level completely. Especially Hangman Page, who has become everyone’s favourite “Anxious Millennial Cowboy’ in AEW, stepping out from the shadows of The Elite and Bullet Club after defeating Kenny Omega for the AEW Championship at Full Gear 2021.

When the two do face off, it should definitely be for the AEW Championship, if Page still holds it. The two faces would put on a brilliant showing of athleticism and strength without the villainous tactics of the standard heel vs face title match. Page’s athletic brawler style and Lee’s agile powerhouse would put on a clinic of a match, just two guys battling for the number one spot in the company in a good old fashioned wrestling match.

Both men have come a long way since their encounter in 2018 and will continue to grow throughout their time in AEW. Regardless of whenever we get this showdown, it is sure to be glorious.

Kenny Omega is undoubtedly one of the greatest professional wrestlers in the world today and is impossible not to include on a dream match listing for any newcomer to AEW.

“The Best Bout Machine” is currently on the shelf recovering from mounting injuries, but when he comes back he’ll want to go after the biggest and toughest competition possible. That includes Keith Lee.

There is no one currently in AEW that has the same aura of Lee, his size, speed, agility, and power make him a threat to literally any member of the roster. Upon his return, there’s nothing that Omega would love more than to cement his best in the world status than by taking on the behemoth Keith Lee.

Once again it’d be a classic match of strong and powerful versus quick and agile, with Omega flying into Lee at high speed offence only to be bounced around like a rubber ball.

Kenny’s return is highly anticipated and when he does return he’ll find AEW flush with new competition in the form of former WWE wrestlers. The first person he should without a doubt aim for is “Limitless” Keith Lee.