Hook vs. everyone please! 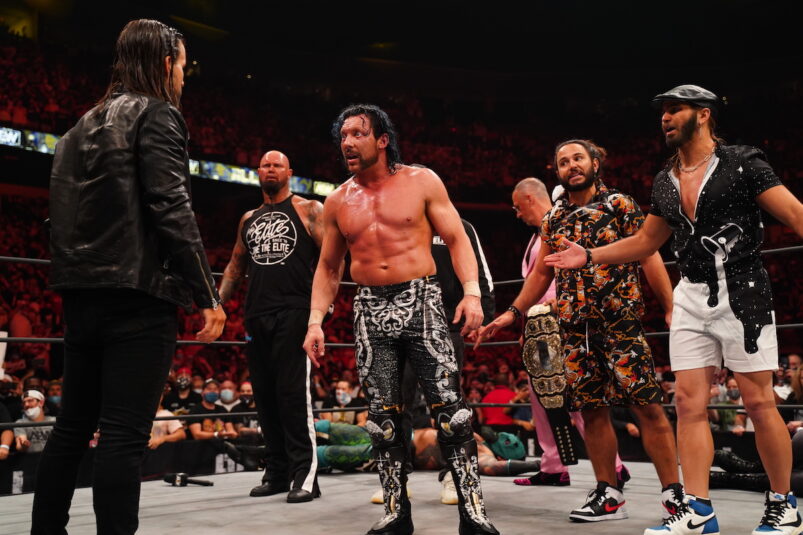 AEW proved to the entire wrestling world that they were a big league player in 2021. Bringing in the likes of CM Punk, Bryan Danielson, Sting and Adam Cole were massive power moves against WWE, while uniting the rest of the independent scene under one banner by busting down the Forbidden Door and trading talent with the likes of NJPW and Impact Wrestling.

2022 could be equally as impressive as 2021 for All Elite Wrestling with the potential of a UK tour on the cards as well as some huge signings to come. With the exciting roster they currently have, there’s more than enough potential to exploit to create some tantalising, marquee main events, as well as some dream matches that have yet to be ticked off the list.

To get in the spirit of things to come, here are 5 matches that we want to see happen in AEW in 2022.

1. Adam Cole & ReDragon vs The Elite

Since the debuts of both Adam Cole and Bobby Fish, fans were anticipating the eventual arrival of fellow Undisputed Era alumni, Kyle O’Reilly. Less than three months later, ‘The Violent Artist’ emerged to assist his former pals against Orange Cassidy and Best Friends. The Not-UE stood beside one another once more, with the Young Bucks looking on in the background with jaded faces.

With Kenny Omega’s brief hiatus, many have fantasised about a future Elite Civil War, with Cole and Omega acting as respective leaders. Now that another of Cole’s factions have arrived in AEW, this lays the groundwork for this eventual barn-burner of a feud. Just thinking of the sheer quality of wrestling that will be on display in a star-studded trios match blows my mind. This match absolutely has to happen in 2022.

Allowing Kenny, Matt and Nick to turn babyface so they can provide this new iteration of Cole and ReDragon an opportunity to be put over in a big way, will help them form their All Elite legacy and put them on the road to becoming three of the biggest stars in wrestling. Should this six-man encounter be booked for 2022, whenever Kenny recovers from his injuries, you can guarantee this will be one of the best of 2022.

CM Punk and Bryan Danielson have found their feet in amongst the ranks of the AEW roster. Both are being used as veterans that should be taken seriously, a rare sort of character in modern pro wrestling. As we’ve seen very recently, Bryan Danielson has been positioned as a massive threat to the AEW Champion, Adam Page, but ultimately lost to ‘Hangman’ in their return bout, putting him over as a credible champion. Meanwhile, Punk is setting up his potential first defeat at the hands of fellow standout star, MJF. Depending on whether Punk walks away with the win or not could mean he’s on his way to an AEW title shot. If he doesn’t, then maybe we’ll finally see this dream match once again.

Of course, Punk and Bryan have met on many previous occasions, not only in WWE but also elsewhere on the indie circuit. With their respective histories making them two of the most respected wrestlers in the business today, it’s only a natural choice to book them against one another for a final series of matches in AEW. Now that Punk is hitting his stride once again and Danielson can turn any match into an instant classic, this has the makings for being one of 2022’s most promising match-ups.

Alternatively, let’s see them join forces and enter the AEW tag division as two entitled dudes in search of former glory. Either way, we’re in for some gold.

‘Hangman’ Adam Page has been killing it as AEW Champion so far, putting in two incredible performances against Bryan Danielson on Dynamite. Now that ‘The American Dragon’ has been swiftly dealt with, Page will be looking for some new challengers throughout 2022. With the rankings suggesting that we’ll be seeing the likes of Miro, CM Punk and Darby Allin soon entering the AEW title picture, let’s look a little further ahead to another former World champion that could return to the mix: Jon Moxley.

Mox has been taking some time away from AEW to focus on his personal battles, which is a commendable choice to make having just become a father. Fans are chomping at the bit for his eventual comeback, and when he does, you can be sure that his sights will be set on reclaiming the main event status he once had.

Page and Moxley have yet to meet one-on-one in AEW, so a blockbuster championship match between the fan favourite and a vengeful ‘Death Rider’ could be an incredible match to put on a big AEW pay-per-view. Add some blood and a hardcore stipulation of some sort and you’ve got one of the most intensely violent AEW title matches to date.

Without a doubt one of 2021’s most powerful images in wrestling was seeing a bloodied Britt Baker do battle with Thunder Rosa on the St. Patrick’s Day special. These two women showed so much chemistry that it’s a surprise that AEW hadn’t booked them into an AEW Women’s title feud before the year’s end. What it does leave us with however is a very exciting prospect for 2022, a match which could easily headline a major AEW event, making it the first women’s pay-per-view main event in the company’s short history.

Wrestling fans are massively behind Thunder Rosa to become the next AEW Women’s champion, not only does she have the skill, the presence and the credentials, but she also has the potential to wrestle an incredible bout with Dr. Britt to help make it a memorable contest. Women’s wrestling in 2022 is looking as promising as ever, with these two ladies leading the fray.

Let’s have some more blade jobs, eh? Just no Dentist’s office match, or whatever the hell it was Baker had to put together with Big Swole.

One of the breakout stars in AEW last year was none other than ‘The Mad King’ Eddie Kingston. Kingston debuted the year prior amidst the pandemic, competing against top stars like Jon Moxley and Cody Rhodes. In fact it was the initial match-up against Rhodes that sold Tony Khan on signing Eddie to a full-time contract. Not only was it a fantastic match, but it got Kingston over in such a way that turned him into one of AEW’s premier stars.

Eddie has since competed for the TNT Championship on a couple of occasions and had some belters against the likes of CM Punk, Bryan Danielson and Miro, but he has yet to actually be crowned a champion of any sort. Now that Cody is leaning into his new ‘heel’ persona, this could be the perfect chance for an anti-hero ‘Mad King’ to take down AEW’s prince.

It would make for the perfect underdog vs silver spoon storyline; undoubtedly Eddie’s promos will be silly good and Cody will lap it up as a heel that thinks he’s everyone’s golden boy. Plus, if anyone deserves to hold a championship in 2022, it absolutely must be Eddie Kingston.