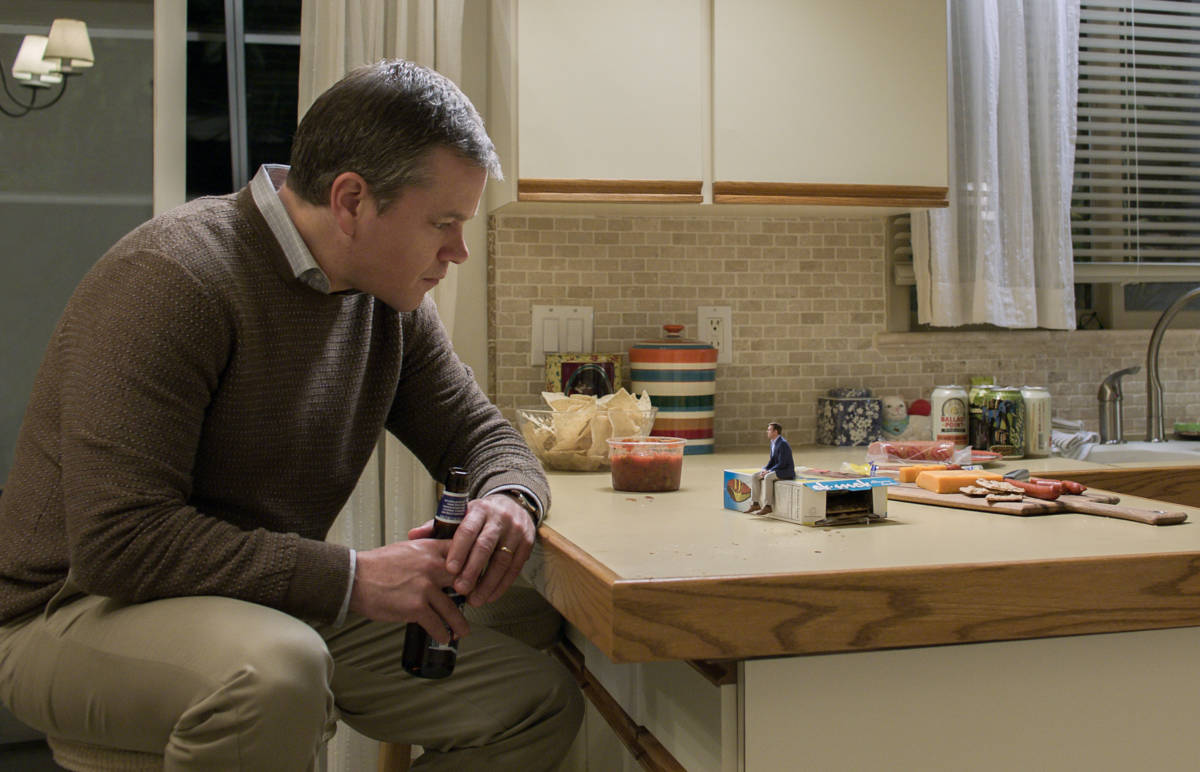 Writer-director Alexander Payne has made a lot of great films in the past but Downsizing is not one of those films. It’s so poorly executed that one can only wonder what film the National Board of Review saw when they were putting together the top films of the year. Think about it.  This is the same filmmaker who gave the world films such as Election, About Schmidt, Sideways, The Descendants, and Nebraska. These were films that well-executed in not only their storytelling but in the strong acting performances as well.

Downsizing has some well-thought out ideas but the script, co-written by Payne and Jim Taylor, doesn’t do enough in terms of the exploration of those ideas. It would have served the film better to explore these downsized communities and in what ways they have a positive impact on the environment. Instead, Payne decides to use actress Hong Chau in a stereotypical way as Vietnamese refugee and amputee Ngoc Lan Tran.  By speaking out against her country’s political rule, Tran is forced against her will to be downsized and sent to Leisureland, where she lives just outside the city in a tenement.

Matt Damon, who stars as occupational therapist Paul Safranek, has the joy of being in two of the worst films this year. In all fairness, Suburbicon was poorly executed from the start when filmmakers decided to merge a Coen Brothers dark comedy thriller with a biopic of the first POC family to move into a suburban neighborhood in Levittown, Pennsylvania. Paul is married to Audrey (Kristen Wiig) and their marriage is heading towards a rocky place if they don’t do something soon.

It’s only when high school friend Dave Johnson (Jason Sudeikis), and his wife, Carol), comes back for their high school reunion. To everyone’s surprise, the two of them are five inches tall.  This leads Paul and Audrey to explore the idea of downsizing and what it could mean for both of their lives. Think about it: $100,000 turns into the equivalent of $12.5 million after being downsized. Who wouldn’t want to live that kind of life?

This may get into spoiler territory and the trailers don’t even bother to warn fans coming for Wiig that Audrey soon becomes an afterthought when the film decides she no longer has any purpose. It wastes Wiig’s talents as an actress in order to move Paul’s life forward.

Meanwhile, Norwegian Scientist Dr. Jorgen Asbjørnsen (Rolf Lassgård) is the scientist who came up with downsizing as a means to an end when it comes to the world’s population and possibility of extinction. If Payne had decided to explore the science of it all, Downsizing may have been better executed in terms of the story. Instead, the scientist plays a bit role in the prologue and nothing major until the film’s third act.

Visually speaking, the special effects were great in how they could get both a full-grown and downsized human sharing the screen together. It’s ideas like that which should have been explored better. With Director of Photography Phedon Papamichael, Payne knows what he’s getting since this is their fourth collaboration together. In framing the film, Papamichael is able to focus on the characters without taking away from the story, however failed it may be. Downsizing features the most visual effects ever for a Payne vehicle and give credit to Visual Effects Supervisor James Price. It’s still crazy to see a person downsized to .0364% of their body mass and volume. Production Designer Stefania Cella also had to scale the film in a way that makes it believable.

Downsizing may mean well in theory but in terms of execution, it’s an awful movie that will hopefully get lost in the holiday movie season.