Dolemite Is My Name REVIEW – A Hilarious Comeback for Eddie Murphy

Dolemite Is My Name overcomes its biopic cliches with an amusingly crass performance from Eddie Murphy. 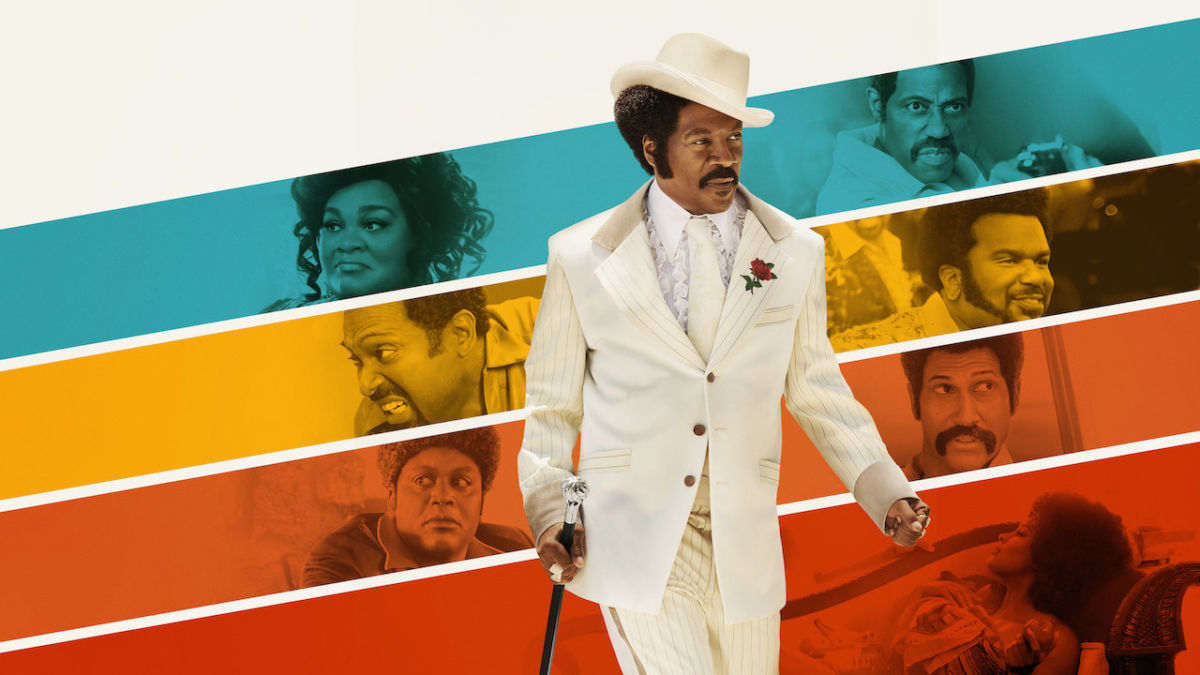 Back in 2011, there was a movie called Tower Heist that promised a sort of comeback for one of the greatest comedic talents of our time, Eddie Murphy. Murphy’s career had hit a slump after a slew of family friendly comedies that were all critically-panned box office bombs. Tower Heist was supposed to be a return to form for the actor, but it was mostly met with a shrug. After that, Murphy retreated from the spotlight, only appearing in a couple odd projects the past eight years.

This year, Murphy is poised for an actual, full-fledged return, kicking things off with the uproarious Dolemite Is My Name, a biopic about the legendary Rudy Ray Moore, known as the “godfather of rap”. It’s the perfect vehicle for Murphy; a role that seems tailor-made for him. Rudy is incredibly charismatic, constantly flashing everyone the biggest smile he can muster, and has a comedic energy to him that Murphy has always possessed and finally gets to showcase again.

The comparisons between the two are downright eerie: Dolemite Is My Name is an underdog story about a talented performer who knows how good he is, but is struggling to find the right act to break through to the masses. “Nobody wants what I got.” he glumly says at the film’s start. Rudy is an aging, out of shape man who’s made attempts at stand-up and singing, but neither have gone anywhere. He’s tasted the limelight before, working with several famous acts (though no one believes him when he makes these claims), just as Murphy has, but audience taste has changed, and he needs something to win back their love and attention.

For Murphy, Dolemite Is My Name is that something. The story takes us through Rudy’s rise to fame, starting with him as a fledgling performer who works at a record store that refuses to play his own songs by day and an opening act for a club by night. Inspiration strikes when he observes how a homeless man (Darrell Keith Richards) is able to hold people’s attention and make them laugh with ludicrous stories. Rudy has the man and his friends sit down with him so that he can record all of their jokes, then goes home to polish them up and turn them into an act he can perform.

Rudy’s performance has a rhyming scheme to it, which he then backs up with a musical beat – a precursor to the rap and hip-hop that would come later. The audience is immediately enthralled; this is something fresh and new. On top of that, the jokes and Rudy’s delivery of them are over-the-top, profane, and obscene, turning the shows into full blown comedic riots. The act is an instant hit, but no part is more popular than the legendary character of Dolemite, a pimp who kicks the asses of countless men and sleeps with countless women. Soon, Rudy is signing record deals and touring the country, yet despite all of his newfound success, he still has higher aspirations. He wants to turn Dolemite into a feature-length movie, complete with car chases and kung-fu action scenes, but as he attempts to put it into production, he finds that he may be in over his head.

I really didn’t realize how much I missed Eddie Murphy until this film. Dolemite’s R-rating allows him to really cut loose, raucously channeling Rudy and his outrageous and crude humor. It’s a flamboyant and hilarious performance in a hilarious movie, proving that Murphy never lost what made him so beloved to start with. Rudy’s confident, fake-it-‘til-you-make-it attitude and over enthusiasm fits the actor like a glove, but it’s the man’s deep desire to be paid attention to – to be laughed with, admired, and loved – that really blurs the line between the real-life figure and the actor portraying him. It’s a vaguely autobiographical portrait of Murphy in that case, further driving home the point of how much his presence in Hollywood has been missed, and needed.

The film also goes to lengths to show that Rudy’s success wasn’t achieved single-handedly. He had the help of his friends and co-workers, which are all played by a star-studded cast. His friend Theodore (Tituss Burgess) serves as an assistant, Ben (Craig Robinson) writes all of the music, theater director Jerry Jones (Keegan-Michael Key) helps write Dolemite’s screenplay, and Hollywood actor D’Urville Martin (Wesley Snipes) begrudgingly signs on as the movie’s director after Rudy runs into him one evening at a bar. But the biggest standout is Da’Vine Joy Randolph, who plays Lady Reed, a woman that Rudy meets while on tour and adds to his act. Randolph is able to match Murphy’s comedic style and energy, even upstaging him at times, and the two are a match made in comedy heaven.

The film isn’t perfect; it hits far too many cliché biopic beats that can be seen coming from a mile away, and it has almost no conflict throughout. What little issues arise, such as Rudy running out of money to make the movie or studios rejecting it, are solved within the next scene. Rudy obviously faced obstacles and naysayers during his rise to fame, but the film has everything go far too smoothly for his story to be as compelling as it could be.

It also fails to be a more introspective look at the man himself – there are inklings of selfishness and self-doubt within Rudy, but these get glossed over in favor of casting him in a pretty flawless light. Perhaps there wasn’t enough time to look deeper into his psyche (the film is already almost two hours), or perhaps he just wasn’t that complicated of a person (which I doubt). Regardless, it feels like a missed opportunity to make the film a little more interesting and give Murphy a crack at more dramatic acting, something that we know he’s capable of.

Of course, this isn’t a character study. It’s a celebration of the life and legacy of one of the greatest pioneers in entertainment. Dolemite Is My Name is both inspiring and incredibly hilarious – you’ll be howling with laughter throughout. If, like me, you’re not overly familiar with Rudy Ray Moore and his story, it makes the experience all the better. Eddie Murphy is officially back in action, and I sure hope he’s here to stay.

Verdict
Dolemite Is My Name overcomes its biopic cliches with hilarity and an amusingly crass performance from Eddie Murphy.
8
Cultured Vultures is a pop culture website established in 2013 covering all things gaming, movies, and more. We eat your words.
All The News On Your Favourite Games