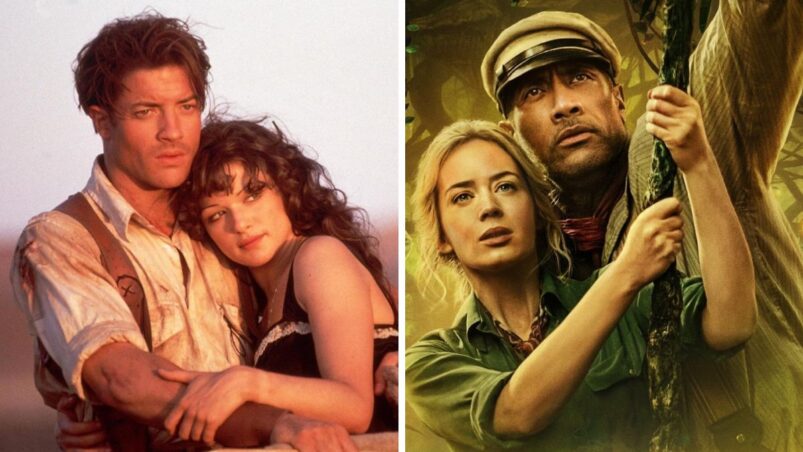 After the trailers and all the promotional material for Jungle Cruise emerged, I was honestly prepared to write the movie off. As much as I adore Emily Blunt (is there anything this woman can’t do?), I truly expected it to be one of those blockbuster films that fades into the obscurity the moment its released, just another cash-grab from the Disney factory. Surprisingly, this did not happen. Even more astounding is the fact that the movie is, um, decent?

I wondered why I had a begrudging fondness for the movie, and realised that a big reason is that it’s an amalgamation of adventure/comedy films from the late 80s to the early 2000s, movies like Indiana Jones, Pirates of the Caribbean, and most strikingly 1999’s The Mummy (not to be confused with the 2017 movie of the same name with Tom Cruise). In fact, the movie uses similar character archetypes, even in the villains, and has pretty much the same plot structure.

In The Mummy, Rachel Weisz’ Evie is a museum librarian who hires Brendan Fraser’s Rick to take her and brother Jonathan (John Hannah) to Hamunaptra, since he’s the only person able to do so. In Jungle Cruise, Blunt’s Dr Lily Houghton enlists the help of Dwayne Johnson’s Frank to navigate down the river, in search of the elusive Tears of the Moon.

Along for the ride is her brother McGregor (Jack Whitehall), with both brothers taking on the role of comedic relief. They are set up a tad differently, as Jonathan tags along for monetary reasons, while McGregor is there to look out for his sister. Still, their presence in the narrative is to exist in contrast to the main protagonist’s masculine, alpha male ways – both men are portrayed as wimpier and less capable when it comes to fighting and find themselves to be victims of the harsh terrain.

Whitehall’s McGregor does get a few more layers, since we discover why he feels so indebted to his sister, and the reason behind him following her on this trip when he’s ill-equipped in nearly every single way. However, because it’s Disney and is stuck with a PG rating, we don’t really get much beyond that, though this could of course change if we get a sequel (God forbid).

Both the Evie/Rick and Lily/Frank pairings have the same kind of dynamic – the women are the brains of the operation, and the men bring the muscle. While they do need to be rescued at times, the women are the furthest thing from damsels in distress, and we admire their courage and their wit.

The antagonists are also built from the same cloth, the human ones as well as the supernatural entities. Jesse Plemons is extremely funny as Prince Joachim, playing a German caricature with unrestrained glee – I’m pretty sure he was channeling Christop Waltz’ energy from Inglourious Basterds the entire time. The human villain (known as the Curator) in The Mummy is extremely forgettable, I just know he dies somewhere along the way. The supernatural counterparts from both films, namely Aguirre and Imhotep, have physical limitations. Aguirre and gang are dependent on the river since that is the source of their energy/powers, while Imhotep has to work his way towards a corporeal form.

The two men have done heinous acts in their lifetime, but are humanised in part due to their capacity for love. Lastly, we have our rugged heroes, who have humour and charm, each man starting the journey a bit isolated from things, but gaining love and a sense of belonging as we reach the end. However, the Rock, as likeable as he is, isn’t Fraser. He embodies the role of action hero very well, but can’t quite deliver the same level for romantic hero, while Fraser dominates in both these aspects.

Also, Evie and Rick’s romance is the heart of the franchise. They had a playfulness between them, and a definite spark, and both Weisz and Fraser are just magic together on screen. Despite the breathless adventure that the films wished to wrap us in, it is the tender, quieter moments between the couple that I look forward to the most. When an onscreen pairing works so well, any changes to that dynamic just wouldn’t pan out, and this is why we got a muddled third film when Mario Bello replaced Weisz in the role of Evie.

They also gave them marital problems in the third film, which made this coupling even harder to bear. They shouldn’t have gone ahead without Weisz (the reasons behind why she didn’t sign back on are pretty muddled), especially given the weight of her character in the series, but I guess when franchise bucks are on the line, such decisions might not be possible.

While Lily and Frank are clearly meant to develop a romantic connection, there just isn’t enough chemistry between the actors to suggest anything more than friendship. A romantic relationship is needed for the sacrificial aspects towards the end of the film to have more credence. I believe that they care for each other, however, there just wasn’t enough there to justify each of them putting everything on the line for the other.

On the other hand, when Evie runs towards Rick despite a crumbling building at the end of the second movie, I completely buy it. You even feel for Imhotep, who realises in that moment how completely shallow his love is. So you see, Jungle Cruise is crafted in the same vein as all these adventure/comedy films, but instead of standing on its own iconic footing, it is a mere puppet – eager to mimic and rake in the rewards, but never quite as memorable as these other films that came before.