I want to ride my Gravcycle. 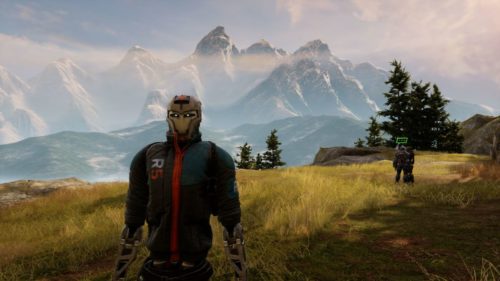 Disintegration’s core premise sounds like a drunken hypothetical question: if you could put your brain into a robot body, would you? You’d be able to extend your life, sure, but you wouldn’t be able to eat food, touch other humans, and you’d probably start to rust any time you went near the sea. Honestly, it might be better off just staying as a meatbag.

Whether intentionally or not, Disintegration’s story themes and gameplay pair off brilliantly together, as both represent blending two different forces into one whole. In the story, humans have placed their brains into robot bodies in a process known as Integration, while the gameplay fuses FPS/flight gameplay with strategic elements. Although the overall narrative might not be stellar, the gameplay more than makes up for it. 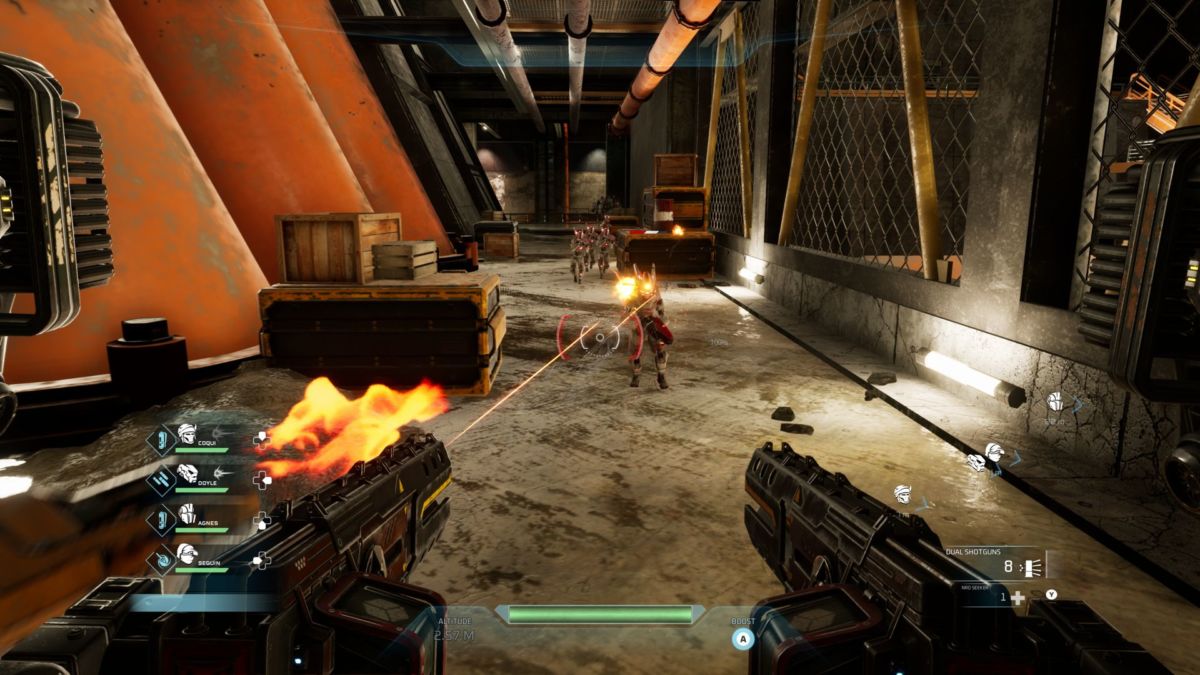 You play as Romer Shoal, a Gravcycle pilot who leads a band of outlaws against the oppressive Rayonne. With threats such as disease and climate change threatening humanity’s existence, humans look to Integration as a means of survival. Naturally, the Rayonne see Integration as a bit of an upgrade, and have now taken to forcing the process on all of humanity, so it’s up to you to scupper their plans.

As a plot, it’s a perfectly serviceable sci-fi romp of a ragtag team facing down the might of a totalitarian regime. Sure, it’s unoriginal. You could probably list off plenty of sci-fi films, TV shows, books and games where a group of loveable rebels try to stop an empire from striking back, but it’s decent enough to carry you from the press start screen to the credits. 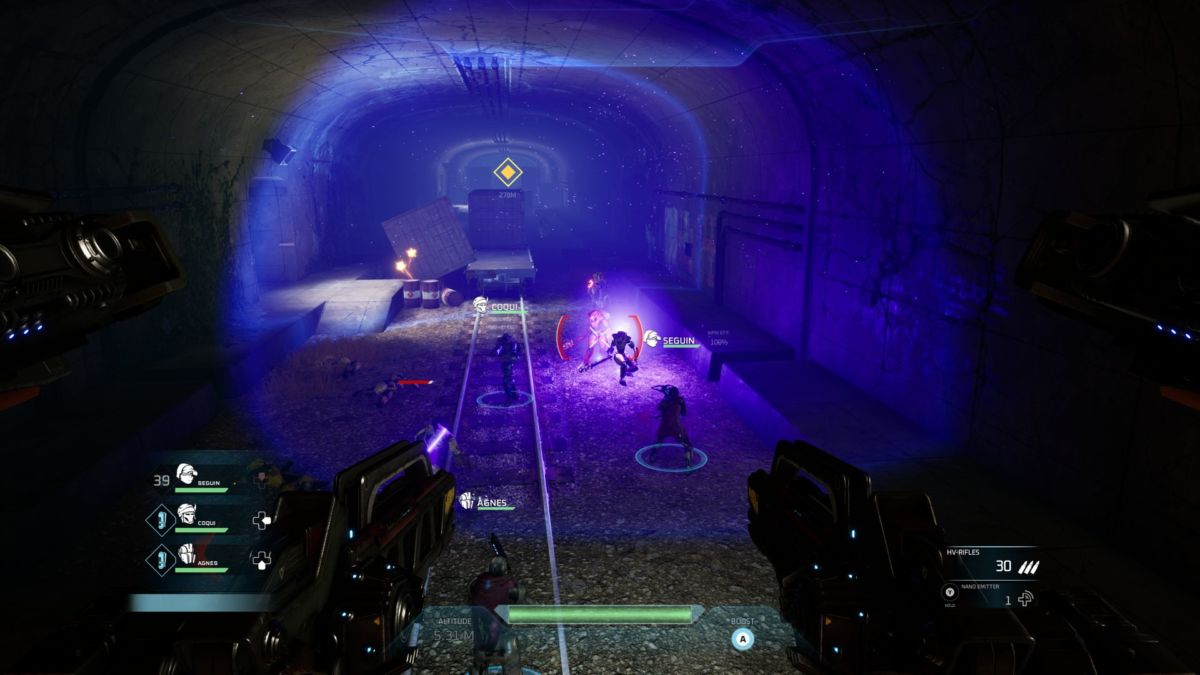 It’s the gameplay of Disintegration that makes the game worth checking out. At a base level, the game is a first person shooter where players control a Gravcycle, which can fly around the map raining down death from above. While the Gravcycle can’t go too high, it offers a refreshing aerial perspective on traditional FPS gameplay that still ensures you’re connected with the action.

Personally, I found that the shooting took a little bit of getting used to at first. During the game’s initial tutorial and first level, I found myself tinkering with my sensitivity settings, as I was struggling to line up shots on certain enemies. However, after a couple of hours of getting to grips with the game’s mechanics, everything had fallen into place. 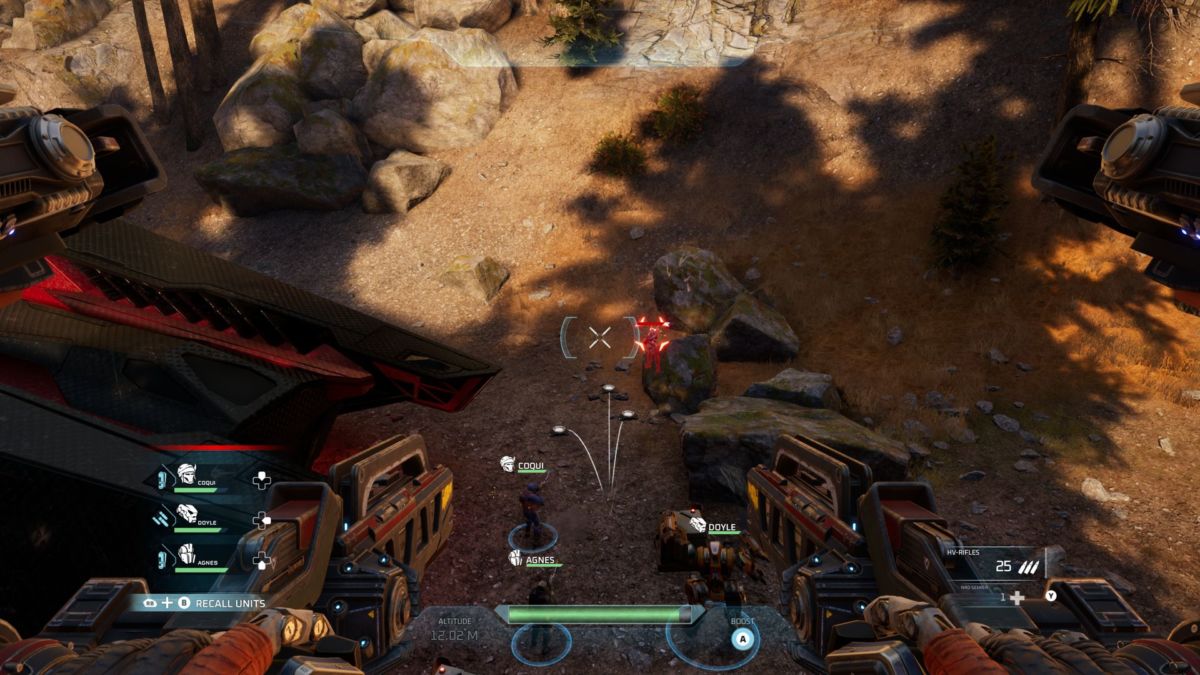 On top of that, Disintegration adds some small strategic elements to the game, as players are given a squad of up to four units to command in battle. These units come with their own loadouts and special abilities, and they’re absolutely invaluable when it comes to turning the tide in a fight, especially during those early moments if you’re still getting used to the aiming.

Commanding your squad is incredibly simple, as it only requires a simple press of the right bumper to perform context sensitive actions. If it’s an open space, the units will move there. Tag an enemy, and the unit will converge on them with everything they have, while you can also use your squad to complete certain objectives or open collectible caches. 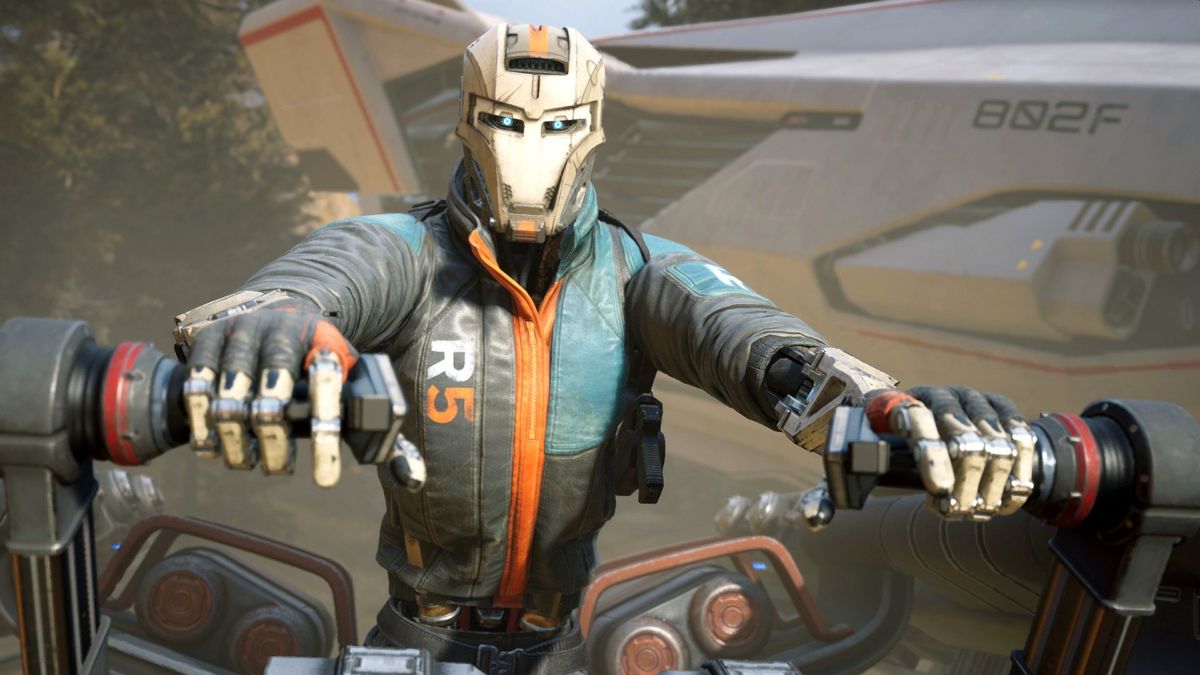 It’s up to you how you choose to play Disintegration, as you could either try to one-man-army the entire Rayonne forces, with your squad running along behind trying to help as best they can, or you can hide behind your squad, issuing orders like a disinterested military commander sending troops out to die. Both are viable, but naturally you’ll be more likely to succeed if you do both, using the team to focus down larger enemies or defend key objectives. If nothing else, sticking with your team members gives the enemy more targets to shoot, which is always nice.

Each team member also has special abilities, such as concussion grenades, slow fields, ground slams and mortar strikes. These abilities are incredibly useful for controlling the battlefield, weakening bigger enemies and neutralising snipers. You can also use these abilities to stagger opponents, opening them up for even more damage. Teamwork does indeed make the dream work. 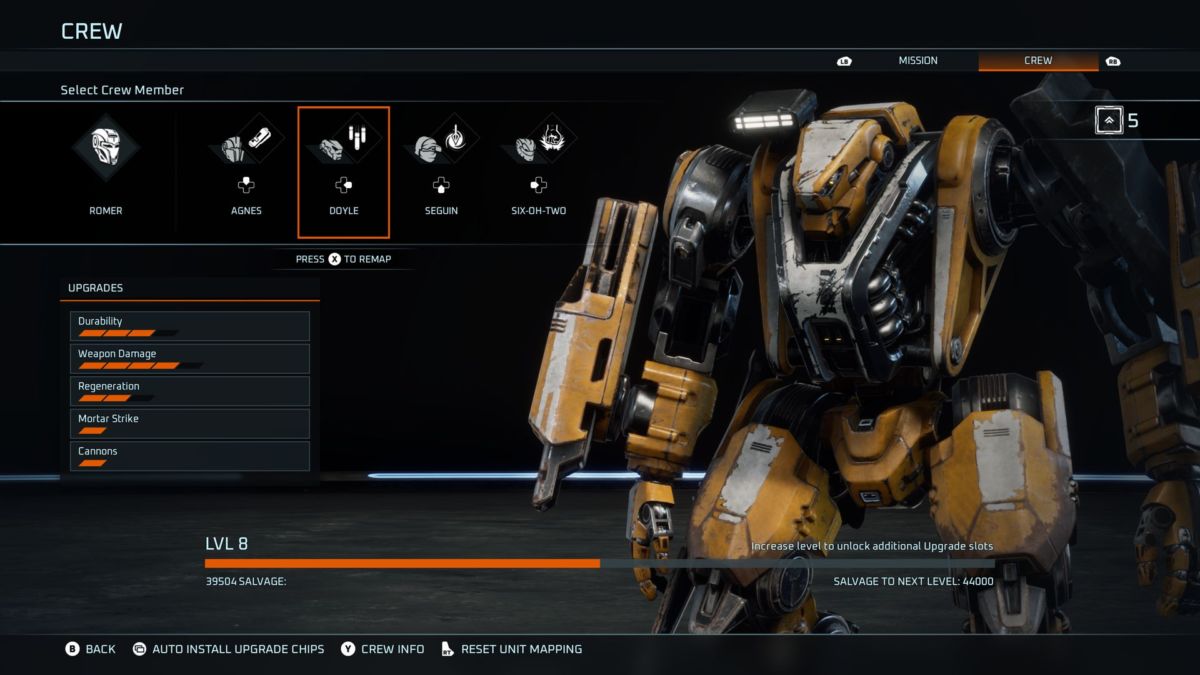 Despite their best efforts though, the AI units you supervise are a bit thick, as they’re constantly walking into mines and other dangers, so it’s best if you guide them through the battlefield, directing them to stay away from anything explosive. Fortunately, if one of your units does bite the bullet, you can simply collect their “brain-can” and they’ll respawn after a short delay.

In between levels, you can explore staging areas, talk to your fellow outlaws to gain more insight into the world of Disintegration and accept challenges for the mission ahead. These challenges, along with certain caches you find during the level, will reward upgrade chips that can be used to improve the stats of yourself and your squad, though you’ll need to level up by collecting salvage to unlock the upgrade slots.

Improving the abilities of your team is great and all, though the campaign structure makes upgrading more of a hassle than it should be. Each level offers a different crew set-up, along with a different loadout for your gravcycle, meaning you can only upgrade whoever is in your squad for that mission. For some missions, you’ll start out with no crew members, which means no upgrades for that mission.

Not being in control of your loadouts feels somewhat unsatisfying too. Certain missions will equip you with light machine guns and rocket launchers, while others give you a pair of rifles and a healing gun. There’s a good selection of weapons that you can utilise throughout the game, but it’d be good if Disintegration allowed you to put together a set-up that works best for the player. 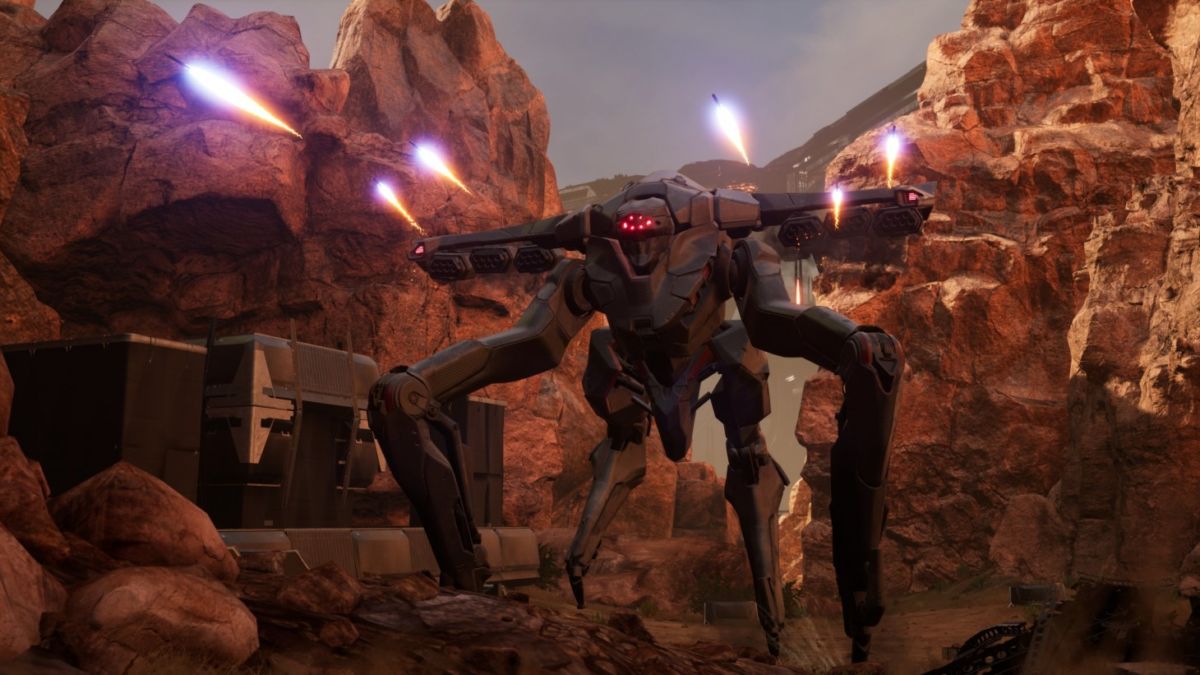 While the single-player has its charm, the multiplayer isn’t quite so enticing. At launch, the multiplayer has three modes and a handful of maps. These modes include Zone Control, which is your standard Domination style game type, Collector, which emulates Kill Confirmed, and Retrieval, a Capture The Flag mode replaced with cores.

The gameplay of the single-player is translated pretty well over to the multiplayer, squad and all. The only change is that time doesn’t slow down when you try to line up an ability. Other than that, you’re still issuing orders to your team, except everything is 200 times more hectic because there’s five actual players, with their own AI crews, trying to murder you. 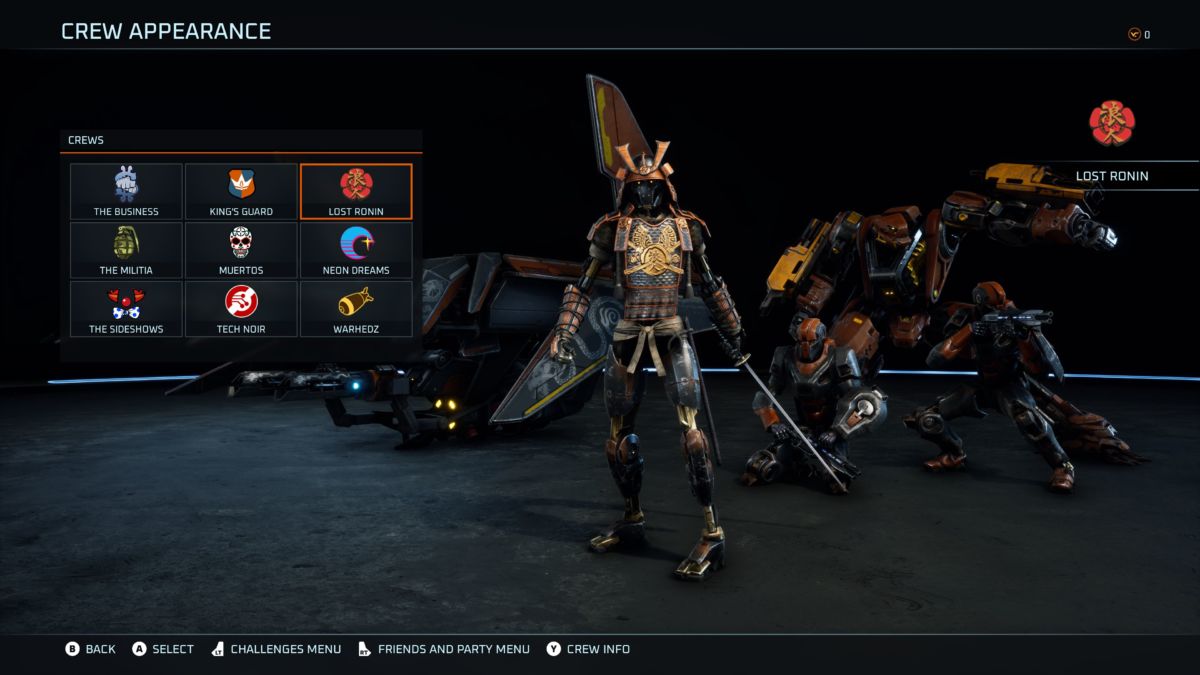 Disintegration’s multiplayer is fun for the first few games. There are nine total “crews” to pick from, each with their own Gravcycle and AI crew, and each offer a varied mix between high durability, damage, speed and the ability to heal others. There’s room to pick which crew is right for you, and the game will tell you during a match how many of your crew are on each time, allowing for more balanced compositions.

The problem is that the multiplayer seems quite barebones at the moment. There’s only three modes and a handful of maps, so players will likely become tired of the same content quite quickly, while the game’s progression system only allows for cosmetic unlocks. None of the crews have customisable loadouts either, just like the single player, which presents the same issues.

There’s something about the hectic nature of the multiplayer that also robs Disintegration of its core ideals. The strategy and command of your units seems to get thrown right out of the window once you’re dropped into a multiplayer lobby, turning a tactical shooter into chaos real quick. It’s just not as fun.

Disintegration likely isn’t going to become a world-beating, blockbuster title that’ll rocket to the top of everyone’s GOTY lists, but the game’s blend of FPS/flight gameplay and real-time strategy give the game a unique formula that could be built upon in future installments. If you’ve got some spare cash and you’re looking for something a bit different from the usual shooters, Disintegration is worth picking up.

Xbox One code supplied by publisher. 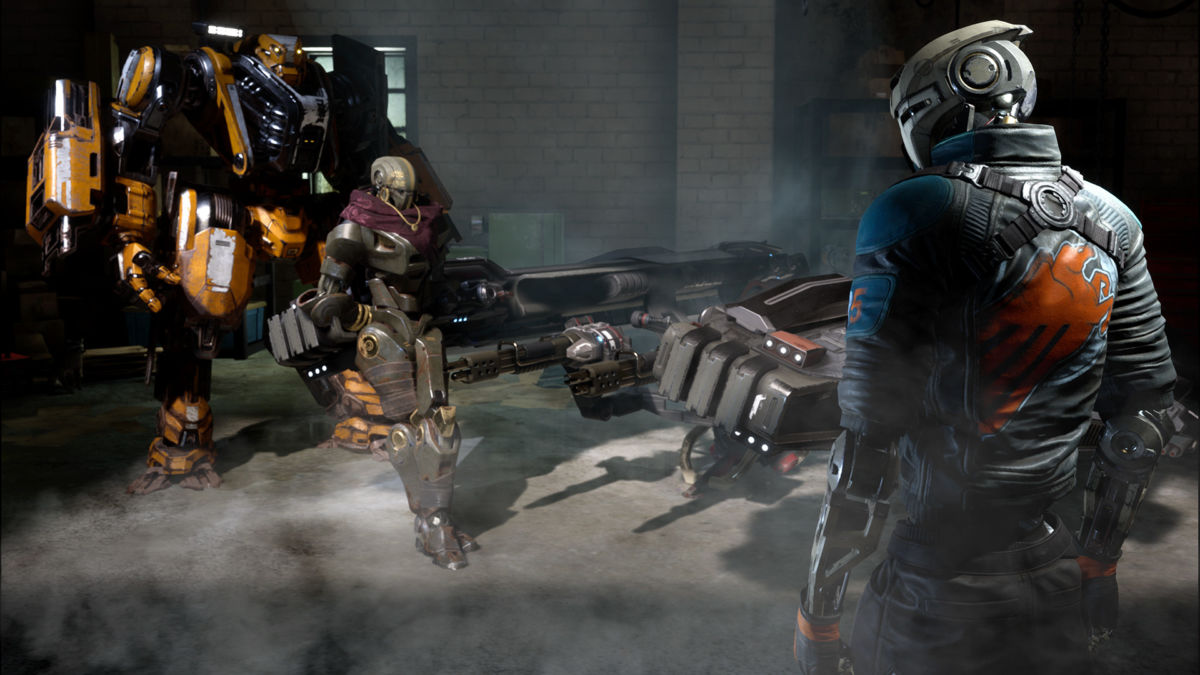 Verdict
Despite some flaws, Disintegration’s genre fusion presents a worthwhile alternative from your traditional FPS experiences.
7
Cultured Vultures is a pop culture website established in 2013 covering all things gaming, movies, and more. We eat your words.
All The News On The Biggest Games