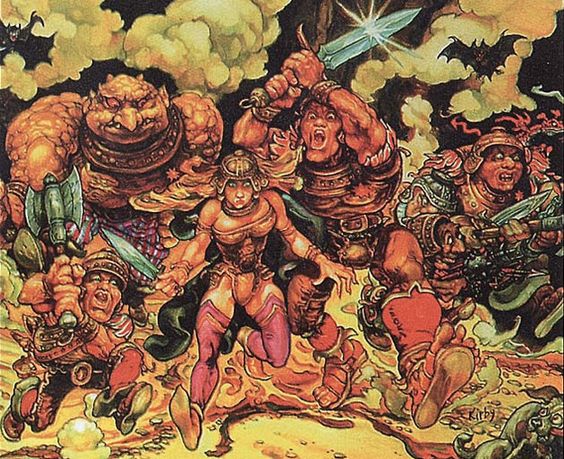 With ‘Men At Arms’, number fifteen in the series, I am just over a third of the way through and starting to believe that maybe I will actually finish this crazy project. On my carefully alphabetised bookshelf – hey, don’t laugh at me! – I am almost at the end of the first row of Discworlds. I have two left to go and then I will be onto the second row, and you will probably laugh at me more when I tell you I am finding that prospect particularly exciting. Onwards then, as quickly as possible!

Before I started writing this up, I checked back on my ‘Guards! Guards!’ article, to see exactly where the Watch had got to when we left them before. Carrot was the only ‘ethnic’ member of that four man team, the human who had been raised a dwarf. This story is, in many ways, about race relations. The Night Watch has been ordered to recruit some more minorities, who take the form of Detritus the troll (whom we have met before), Cuddy the dwarf and Angua, who appears to be included by way of being a woman but who is actually also a werewolf for one week in every month. She is probably the least of Sergeant Colon’s problems, as Detritus and Cuddy clash just as their respective races are clashing all over the city thanks to the murder of one Hammerhock the dwarf.

I really enjoyed the evolution of Detritus and Cuddy’s relationship, from sworn enemies to reluctant allies, to friends. I actually completely forgot how Cuddy’s story ends (I was mixing him up with another dwarf who comes later) so reading about his death and Detritus’ reaction to it was as much of a shock for me as it was for the troll. I’ve talked before about how Pratchett tells familiar stories – enemies to friends is an old trope – but I’m never bored with them, because his own spin on them is so uniquely Pratchett that it never feels like it is being recycled. I’ve mentioned before that for all his fantastical ideas and wacky imagination, Pratchett really excels the most at characters and relationships, and some of the best representations of these are in the Watch books.

Sam Vimes, for all the Watch is really about him, is actually quite absent from this story, at least in comparison to the other books. We see him struggling with the notion of his upcoming wedding and imminent retirement, and certainly some of the most powerful moments are his; when Carrot prises his hand open and finds he is clutching his badge so hard that he is bleeding, after Vetinari stands him down, particularly sticks in the mind. However, I would say that the real star of this story is Carrot, who takes on command when Vimes is absent and manages to successfully negotiate race riots, rogue assassins, the fact that technically the Night Watch has been disbanded and his own blossoming relationship with Angua.

My opinion of Carrot has changed drastically on this re-read. Just like Rincewind did all the way back in ‘The Colour of Magic’ and ‘The Light Fantastic’, he has grown on me, to the point where I can’t even remember why I didn’t really like him in the first place. I think it could be partly due to the fact that there is so much going on in these books that it is hard to take it all in the first time through. I bang on a lot about getting your copies out and re-reading, but I honestly can’t recommend it enough; think how much you could have missed before.

Anyway, to Carrot. He has changed a lot since ‘Guards! Guards!’, quietly working away in the Watch whilst we have been on whirlwind trips with Granny and Death to the far ends of the Disc. Carrot is more streetwise now, far more savvy and a little bit wiser. He is still the straight talking person we all remember, with an air of charming naivety but, as Sergeant Colon notes, ‘Simple is not the same thing as stupid’.

Carrot knows exactly how to talk to people, how to make them see his point of view and how to make them change theirs. He knows everyone and, crucially, they all like him. In fact, the more I got to know him, the more he reminded me of Vimes. Carrot is how Sam Vimes would look if the world hadn’t got to him first, if he had been raised in the kind of loving and supportive environment that Carrot was, if he hadn’t been forced to make his life on the streets and had maybe chosen it instead. I think that a part of Carrot recognises this as well; he literally idolises Vimes.

The only time he loses his cool and snaps is when Angua dares to say something bad about his captain. He quotes Vimesian words of wisdom as readily as he quotes his own father. He alone is responsible for Vimes’ promotion to Commander at the end of the story, accepting the role of captain but refusing to take command. The Watch belongs to Samuel Vimes and he will not take it away from him. This relationship is not one that was on my radar before I picked this book up, but stay tuned, because now I’d rate it up there with Granny and Nanny as one to watch.

Favourite Quote – “Dogs are not like cats, who amusingly tolerate humans only until someone comes up with a tin opener that can be operated with a paw.”