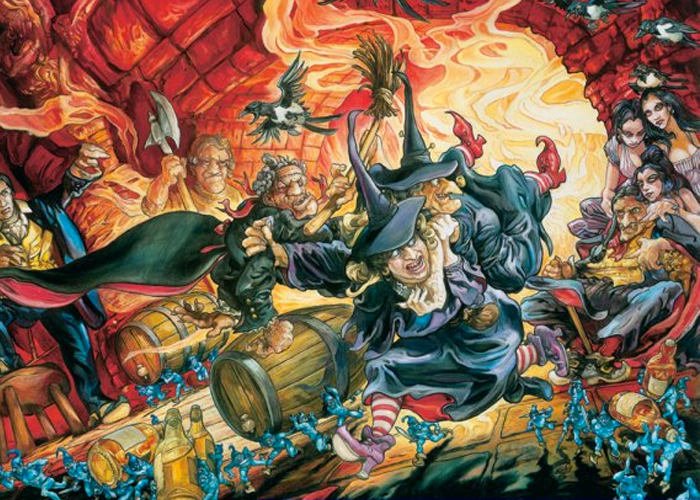 As I get further into this mad challenge, I find myself having to go back and remind myself of what I said in the last article I wrote about a particular set of characters. I am doing this partly to check that I don’t repeat myself too much (no one has told me that I am, so I live in hope that my rambles are making sense), and partly to see what past-me had to say, and if the current book has changed any of that thinking. In this case, it definitely has, which I will elaborate on shortly.

Carpe Jugulum is a welcome return to the witches after all of those wizards, this time dealing with the vampires of the Disc and featuring a bonus of four witches instead of three, as Agnes Nitt returns from Ankh-Morpork and takes up residence in Magrat’s old cottage. I really liked Agnes in Maskerade and I am glad that she returns here; I mentioned before that Magrat’s character always suffered from sharing a page with Granny and Nanny, but Agnes has a stronger presence and holds her own much better. Magrat, to be fair, is really coming into her own by this novel, as both a mother and a queen, but it is even better to have her and Agnes to counterbalance the older witches. One of my favourite moments is when Magrat renders Nanny speechless by implying that she very much understands Nanny’s filthy jokes, and uses them against her. Magrat of Wyrd Sisters would have been too busy blushing to use such an innuendo. She and Nanny even have a short but frank conversation about sex that for once doesn’t feel like a joke. You can keep your George Martin; Terry Pratchett was writing fantasy with feminist characters years before A Game of Thrones was published.

To the vampires then, who in their own way feel even more of a threat than the elves did in Lords and Ladies. The elves were cruel and merciless hunters, banished from the Disc to where they could do no damage. The vampires, on the other hand, live on the Disc. Uberwald, their country, borders Lancre, the home of the witches, and when King Verence sends a well-meaning but ill-advised invitation to his neighbours, he breaks the first rule of vampire relations; they can only go where they are invited. The Count is a modern, forward thinking vampire who has trained his family to tolerate garlic and sunlight, and who smiles politely at people even as his family goes about enslaving them. The worst part about this vampire clan is that people find themselves wanting to subjugate themselves and thanking the family for the privilege.

The Count is the strongest adversary the witches have encountered so far, the power of his mind rivalling Granny’s, and even Nanny admits that she could not possibly defeat him on her own. Back in my Lords and Ladies article, I talked about how a first time reader might begin to doubt Granny’s ability to hold back the evil that she longs to embrace. Somehow though, in this novel, even though the threat is more immediate – the vampires literally bite Granny – I had no such feeling. A new reader would not question her strength here. I tried to figure out why this is and I think it is, once again, to do with storytelling. The other witch novels have dealt with stories and myths, and how stories always follow a pattern and nothing you do can change that. Here though, the Count has worked hard at making the stories obsolete; all of the tried and tested vampire killing techniques do not work on him or his family and so the slate must be wiped clean. In doing this, he has freed Granny to follow her own path instead of being a slave to the story and as such you just know that she is going to come up with something excellent to defeat him. She does, but I am not going to ruin it for you. I had forgotten her solution from my first read and, needless to say, I was wooping at the end.

This book also boasts the Nac Mac Feegles’ first appearance in the series and, if Sir Terry didn’t have long term plans for them when he wrote this book, you can see why he decided pretty quickly that they would play a big role later on. If you are unfamiliar with the Feegles, imagine a troop of six inch tall, tiny, angry Scottish pixies and there you have them. I adore the Feegles – they are probably my favourite race on the Disc – and I don’t remember them appearing this early on, so it was an unexpected treat. They are a landmark here; with their introduction, you really feel that we are moving boldly into the next phase of the series and all of the new treats Sir Terry has in store.

Favourite Quote – “…people you can believe in sometimes, but not gods.”