Disco Elysium (PC) REVIEW – The Most Intoxicating RPG of 2019

Disco Elysium deserves to be in the GOTY conversation. 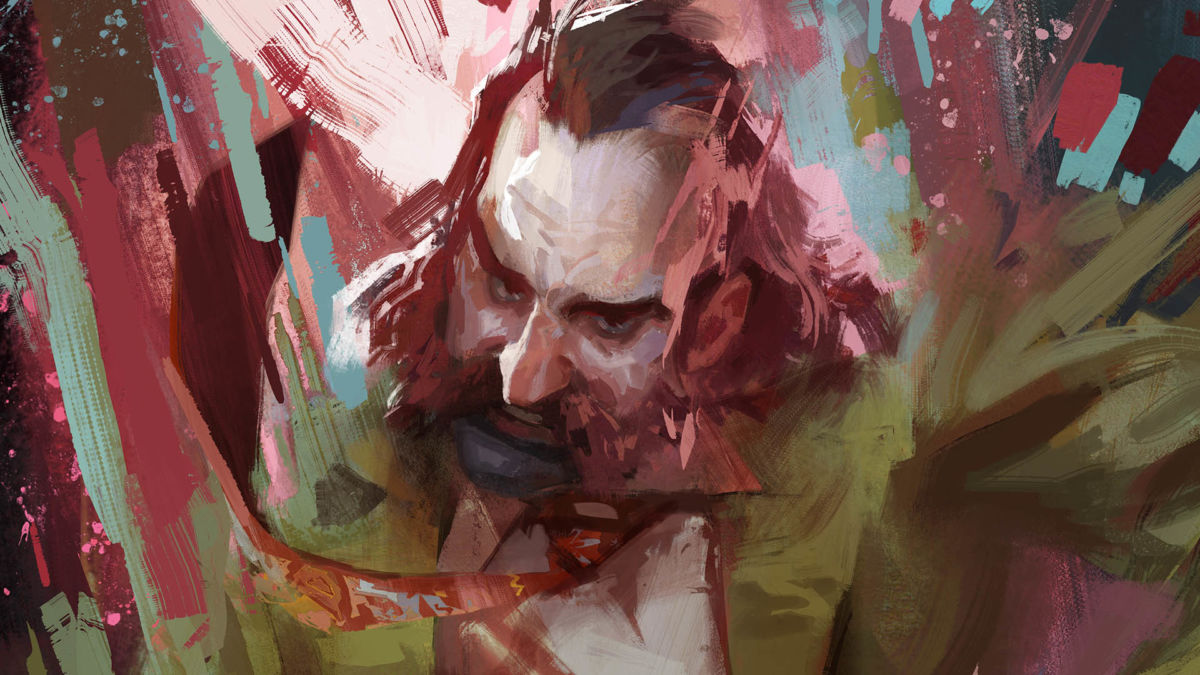 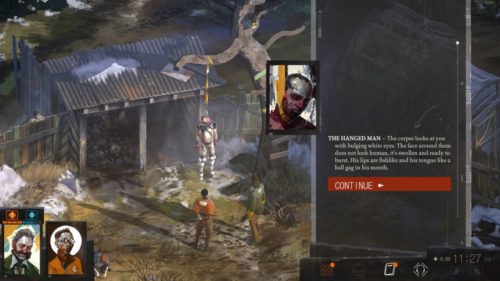 When I first received Disco Elysium code, I was told to take my sweet time, to drink in the world of Martinaise and those who live there, to explore every angle and butcher every karaoke song. So that’s exactly what I did, clumsily going from one clue to the next and making plenty of friends and enemies along the way as I sunk deeper into the game’s compelling mystery — and not just because of the central murder plot. By the time the credits rolled, I was as intoxicated as the beleaguered detective himself.

Disco Elysium opens as it means to go on, disembodied voices telling you to embrace the darkness as you attempt to awaken from one of the most disastrous nights of your life with the hangover to match. You’re playing as a down on his luck detective, who doesn’t even remember that he’s a detective — his brain has taken so much alcohol abuse that he has forgotten everything. Hardly the ideal situation when there’s a dead body hanging from a tree just outside your window. 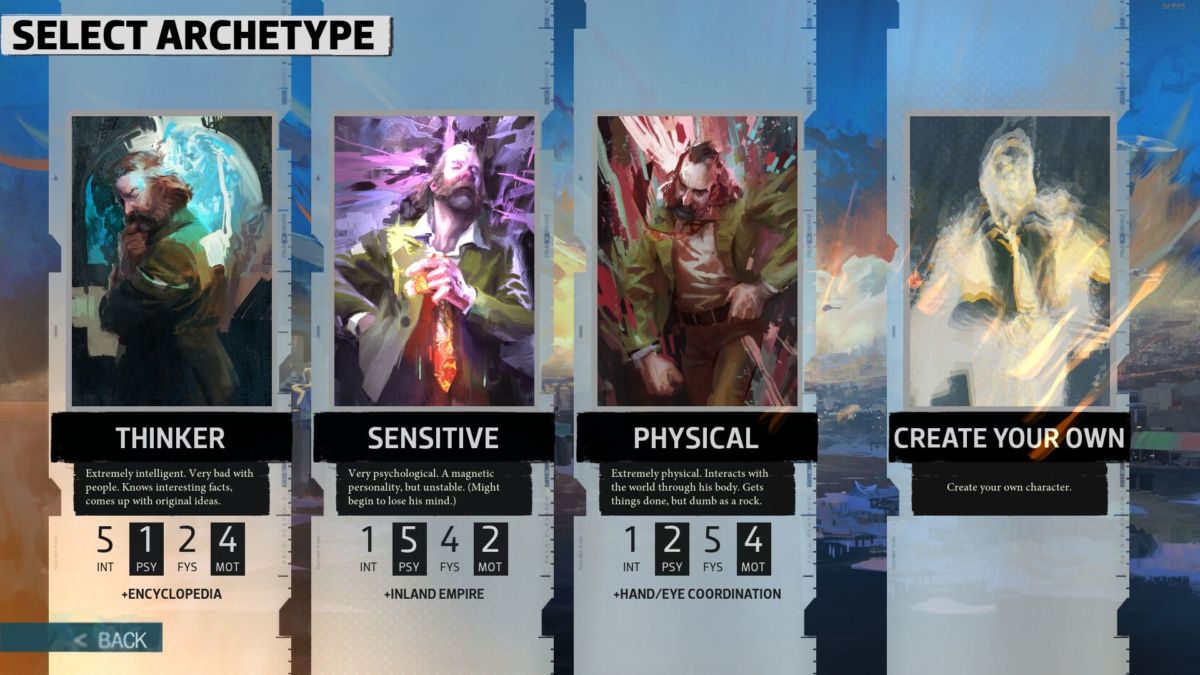 At its core, Disco Elysium is about a murder mystery that you have to solve, but it’s far, far deeper than that. While the gameplay basically amounts to an experience similar to classic point and click games, the staggering depth of conversations, the many different paths you can take, and the kind of person you can mould the detective into makes this one of the most robust and fulfilling RPGs in quite some time.

When you begin a new game, Disco Elysium asks you to choose from three distinct personalities and abilities, or to build your own. Thinker will be able to solve problems while having no people skills, Sensitive will make you deep but totally mad, and Physical turns you into a dumb jock. I opted for Physical, which made my detective not the smartest tool in the shed but a blunt force of nature, though I managed to make him more of an empathetic character as the game wore on, so much so that I became known as the “Sorry Cop” before eventually settling for just “Good Cop”. 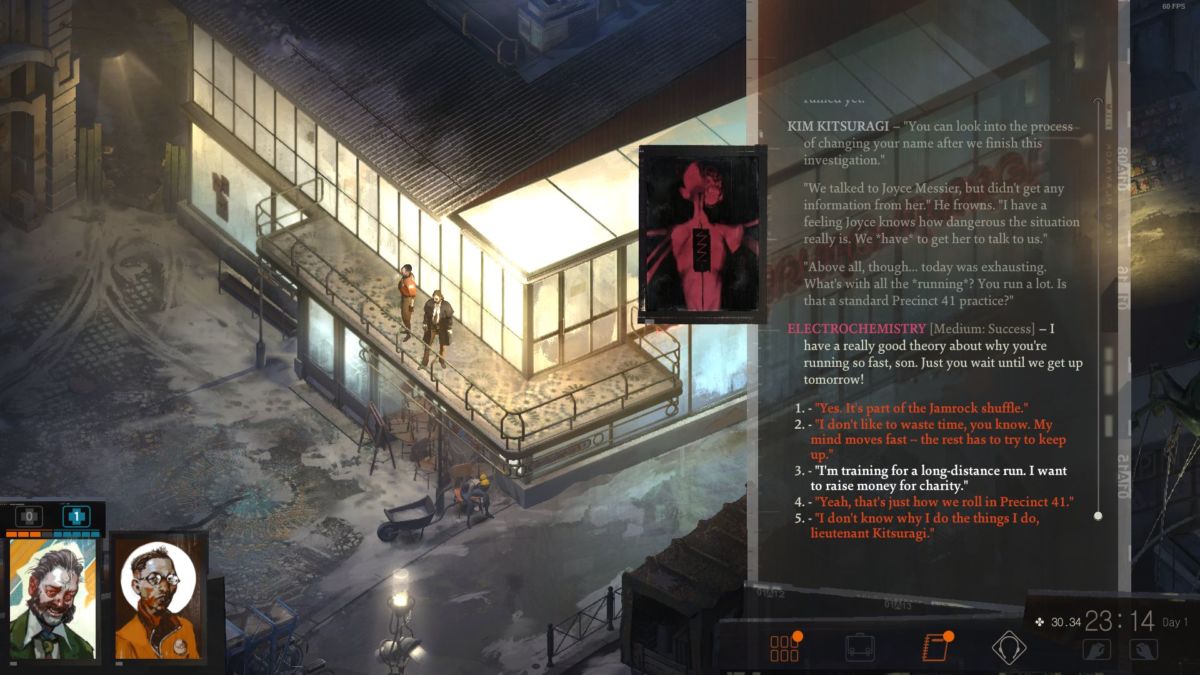 There’s almost an overwhelming amount of upgrades to put your skill points into in Disco Elysium, so much so that no two playthroughs will ever be the same. There are the conventional upgrades, such as how strong and perceptive you are, but there are also things like Inland Empire, which turns the game into a Lynchian sojourn where your hideous tie talks to you. “Thoughts” are another way to change your build, the detective’s encounters and achievements often unlocking neurons in his Thought Cabinet that will give buffs or nerfs to his existing stats, all accompanied by some utterly magnificent art.

You earn XP not by killing perps, but by simply talking to people and unlocking new threads of conversation, as well as making progress on the case and the many, many side activities than can totally consume you in Disco Elysium. For instance, I convinced a woman her husband was missing after she called me a cockatoo, and also tried to discover a new form of music after walking into a tent full of party boys. Both of those seemingly straightforward quests have many moving parts that I won’t spoil here, but the outcomes can drastically differ depending on how you approach them and what you say. 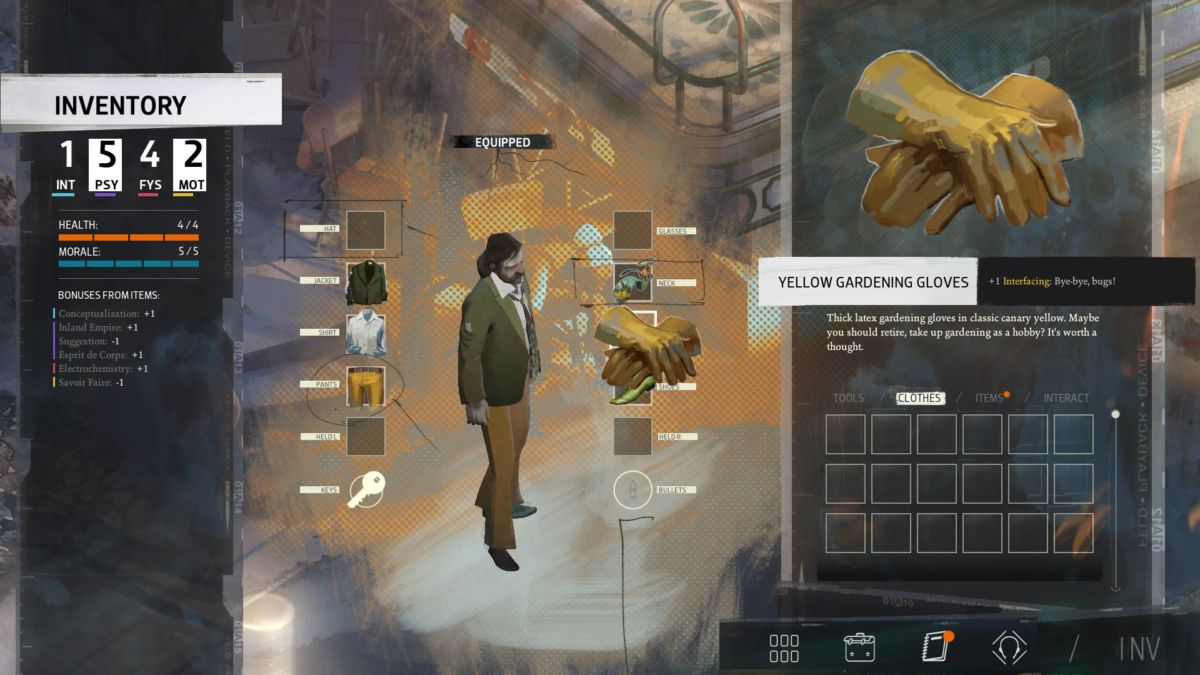 The implementation of these skills in your interactions sees new conversation paths open up, as well as your brain’s specific quirks speaking up and giving their input. Sometimes they can offer insight and point you in the right direction, but they also love to tell you what a useless piece of dirt you are. They often conflict with each other, aptly showcasing the chaos in the detective’s mind.

As well as your skills affecting general dialogue, Disco Elysium introduces a dice roll, which, when combined with your stats and what you’ve accomplished, can determine the outcome of major moments. The earliest example of this is when the detective awakens and finds his tie hanging from the ceiling fan. If you turn the fan off before reaching for the tie, the chances of successfully fishing it out are increased. If you haven’t put your points into the relevant departments, your detective could theoretically die of a heart attack while trying to reach for the tie, the physical and mental wreck that he is. 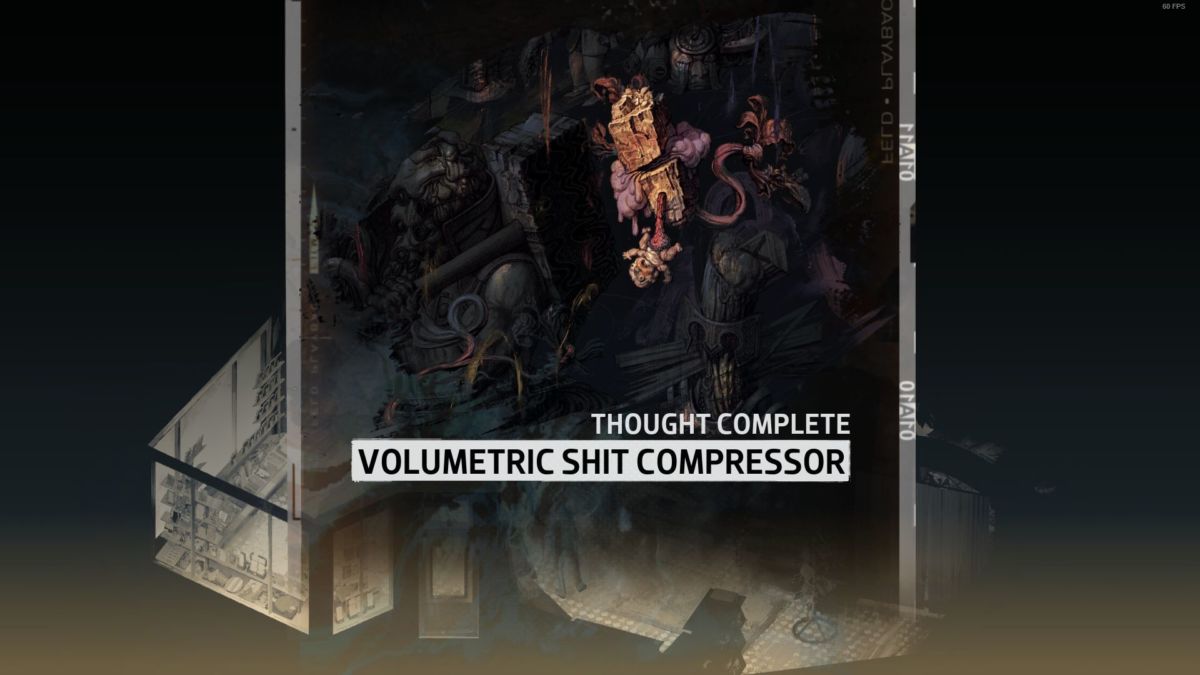 This unusual approach can, admittedly, be a bit of a deterrent for new players, as I discovered when I naively died after going toe-to-toe with a giant racist and the detective’s heart gave out. The game’s spotty autosaving means that unexpected deaths can send you significantly backwards in terms of progress, though the threat of death becomes less of a factor the more you build the detective back up into a functioning human being.

There’s no shortage of things to see and do in Martinaise, a marvel considering the relatively small size of the playable area. It’s a contained map, but one that’s brimming with things to see, people to talk to, and postboxes to pet. You start off at the Whirling-In-Rags, an inn of sorts with the kind of downtrodden characters you would expect from a seaside town recovering from a war, before eventually wandering out and discovering protests, possibly supernatural churches, and a very aggrieved Scouse kid. Your first encounters with the people of Martinaise are almost never your last, more depth to them unlocking after you’ve accomplished certain tasks. I rather obsessively went around and spoke to everyone I could find after a major moment in the story, just to see how the interactions would change, and I was always amazed at how much they could. 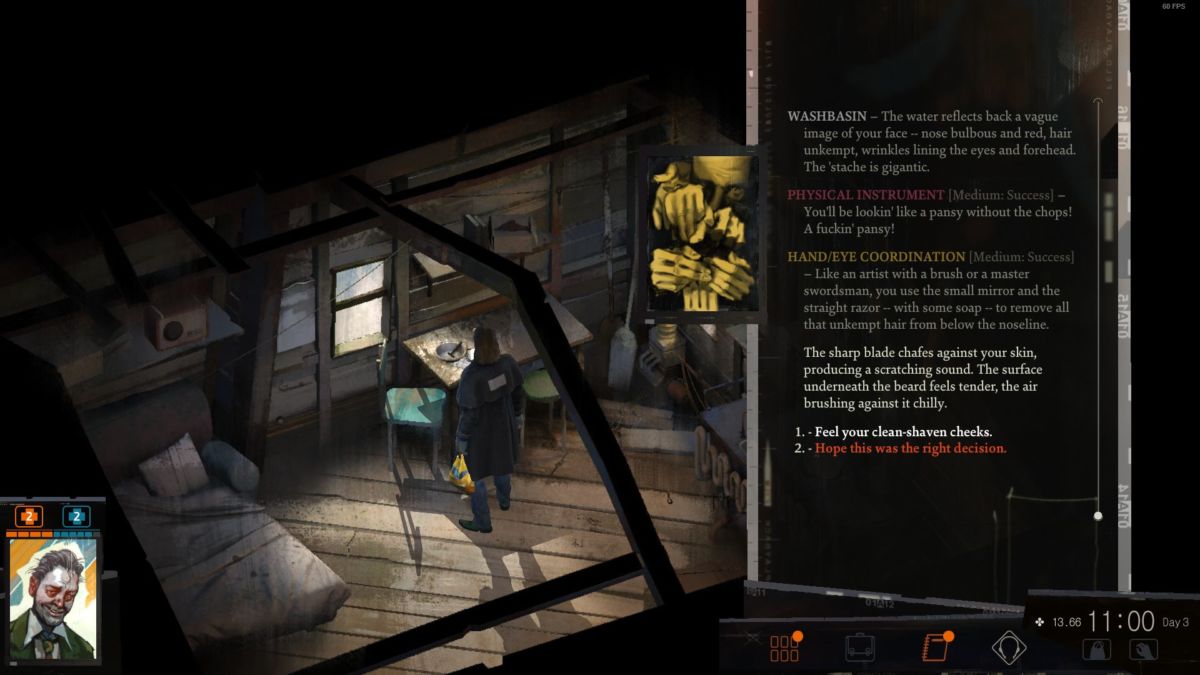 You’re not alone during these misadventures though. Kim Kitsuragi, a typically stern detective drafted in from another precinct, accompanies you, acting as the voice of reason, his conventional approach the exact opposite of the protagonist’s weird and often destructive ways. He’s an infinitely likeable supporting character who also provides yet more examples of the detail in Disco Elysium. If you run around everywhere, he will rather exasperatedly ask why, and also react to the kind of clothes you’re wearing. Kim is an exceedingly dapper guy, so he gets a little upset when he sees the grotesque clothing combinations you can come up.

Clothing can be found far and wide across Martinaise, all of them bringing their own stat buffs and possible nerfs. Far East headwear might increase your drama stat, but it will negatively affect your authority. There are tonnes of possible clothing combinations with few of them doing much to complement the detective’s world-weary appearance, but the buffs they provide can be vital for passing checks — every percentage helps, after all. 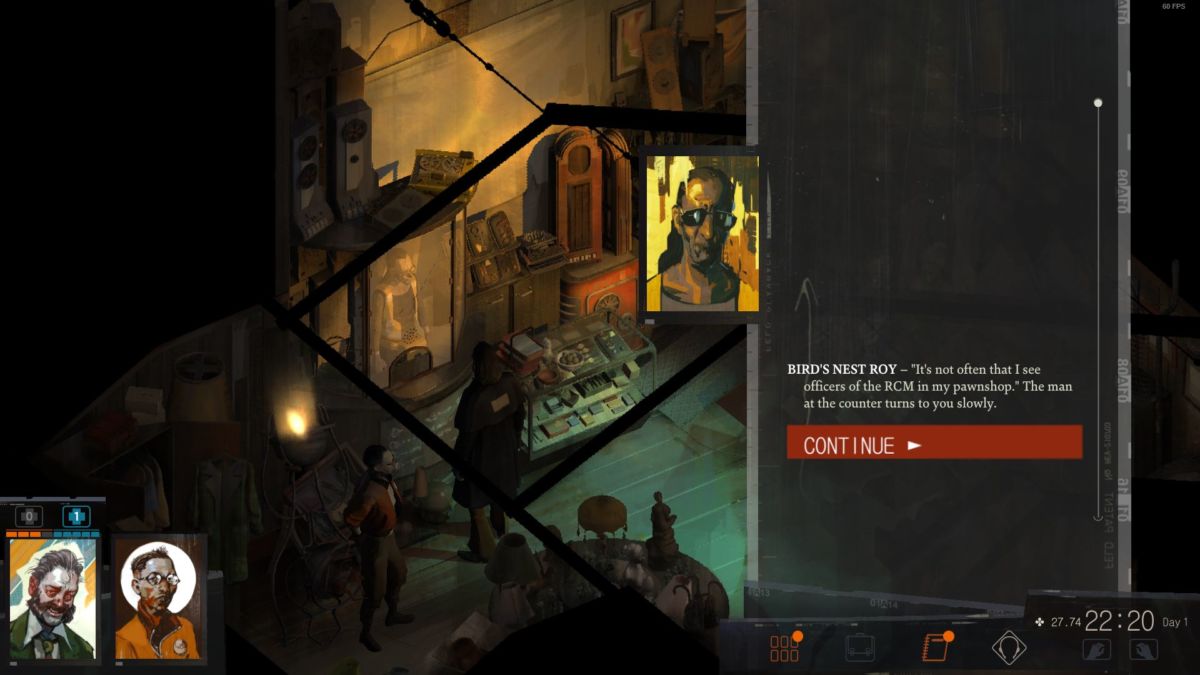 Beyond the main narrative, you can truly get lost in the world-building of the 1950s set Disco Elysium if you want to. A startling amount of attention has been paid by ZA/UM to create a fully fleshed out universe, one that has obvious parallels to our own but with somehow even more scars of civil strife. You can gloss over most of it if you want to, but figuring out the background of Martinaise and the wider Revachol is almost as gripping as the murder mystery itself.

Disco Elysium is a very uncompromising experience, evidenced by how it approaches ideologies and movements — it absolutely rips the piss out of everyone. From communism to fascism, ZAUM have no problem with taking shots at every ideology imaginable and often in a hilarious manner. Disco Elysium really is one of the funniest RPGs you will ever play, it never trying too hard to elicit a smile but usually succeeding. From slow-motion leaping into an old woman to two characters nodding at each until one of them breaks their neck, the comedic moments here often land. 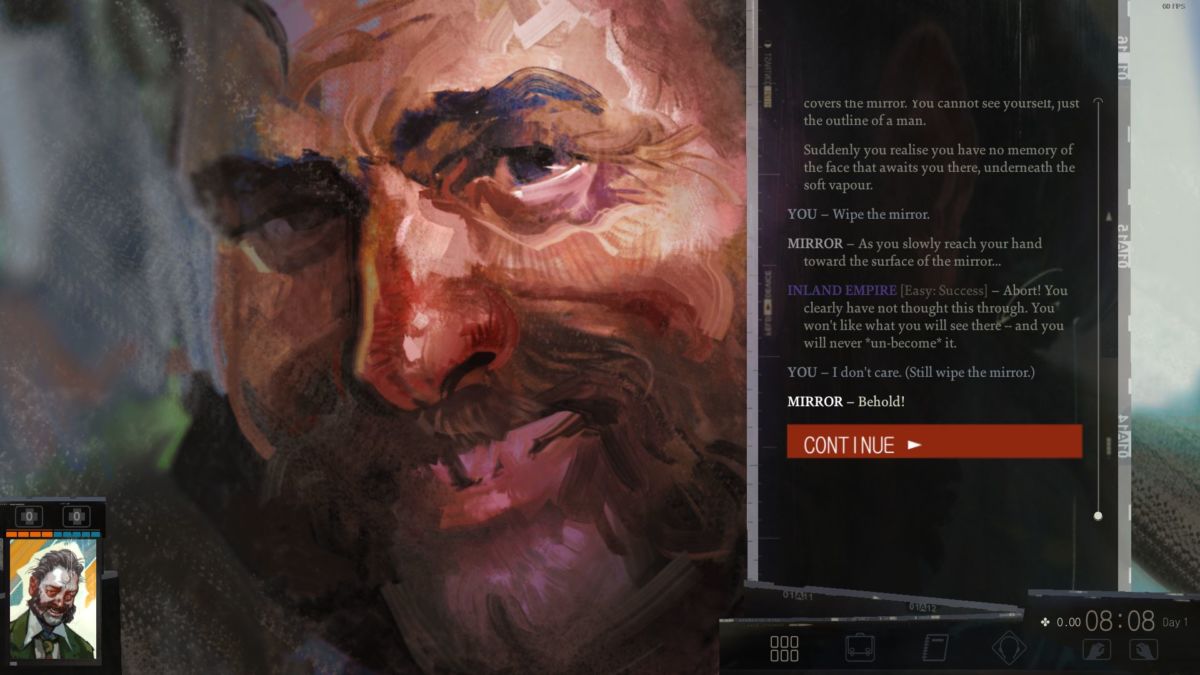 There’s also a great heart to the game, one that flourishes the closer the connection you cultivate with its characters. I can’t say much without spoiling anything, but there are a couple of moments where the detective’s internal and external plight really hit home, so much so that I genuinely stood up at one point and paced around with worry that a dice roll wouldn’t be in my favour. The bond he and Kim share is also quietly brilliant, the polar opposites somehow working in tandem. At least that’s how it played out for me, you can always make a mortal enemy of Kim if you want go fully Bad Cop.

If I had to ding Disco Elysium for anything, a couple of minor flaws stand out. Navigation in general could do with a second look; the movement speed even when running is just a little off the pace. Being able to zoom out further and click to move somewhere far away would also be welcome, rather than having to constantly click every so often. In addition, the loading in interior locations can be a bit much, especially at the Whirling-In-Rags where you will find yourself going up and down the stairs often and being greeted by loading screens just as often.

When I first encountered Disco Elysium back when it was called No Truce With The Furies, I had high hopes that it would turn into a gem, capitalising on its eye-catching art style to deliver something entirely different and new. It’s fair to say that it has convincingly exceeded my expectations. This is an unorthodox but wholly masterful RPG created with sincere passion and an exacting eye for detail. You don’t need to be a detective to sniff out Disco Elysium’s excellence.

Verdict
Disco Elysium is an absolute triumph of character, narrative, and player choice. One of the most intoxicating and dazzlingly dense RPGs of its generation that deserves to be in the GOTY conversation.
9.5