Forget Bruce Willis, Jeremy Irons is the true star of this film. 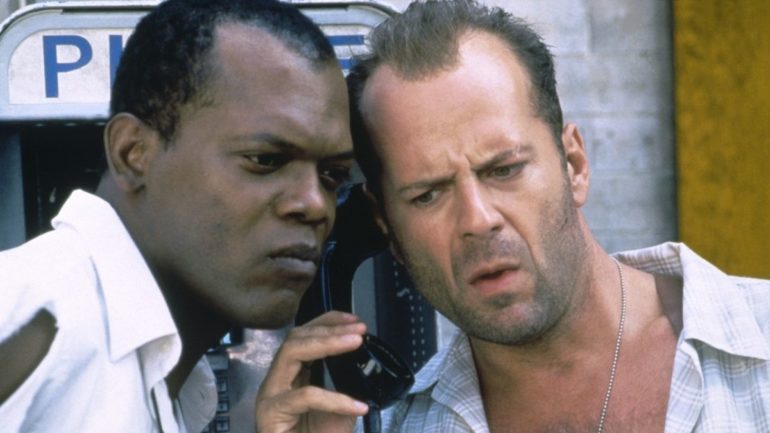 Die Hard With a Vengeance

Ah the 90s, where action movies were brainless and things were being blown up every two seconds. I jest, but this is literally what happens in the opening of Die Hard: With a Vengeance. A mystery caller named Simon takes responsibility for the bombing, and warns that this will continue unless John McClane (Bruce Willis) does as he says, because, well, he’s Simon. Now, Die Hard is an iconic action movie. It gave us a great everyman hero in McClane, a charismatic villain in Alan Rickman, as well as a fantastic villain death sequence.

This is what the 90s action slate was good at, establishing a dynamic dichotomy between hero and villain, and yes it was cheesy and doves might be flying all over the place (I’m looking at you John Woo), but it’s still riveting stuff. We root for McClane, and because the villain isn’t some cardboard pushover, the movie is made all the more memorable. While Die Hard: With a Vengeance doesn’t do much but replicate the formula, it still does a competent job of it, mainly due to the partnership of McClane and Samuel L. Jackson’s Zeus Carver, a man who finds himself tagging along on a madcap spree of tasks all because he tried to be a good Samaritan.

The villain, played by Jeremy Irons, is just as compelling on screen as Rickman was. Both Rickman and Irons are masterful when it comes to their voices, embodying the kind of smooth Jazz tones Ryan Gosling’s character in La La Land could only dream of playing. Don’t forget Irons lent his voice to Scar in The Lion King, a voice performance that gave us one of the best villains of all time – and this is in a Disney cartoon. Here he is stylish, debonair, the kind of man that could make you swoon before he shoots you in the face. Mind you, he isn’t some two-bit criminal who doles out violence all willy nilly. He emphasizes that killing isn’t necessary, stopping one of his female counterparts as she mindlessly slashed into a security guard, choosing to let Zeus go (albeit at certain times) because his gripe wasn’t with him.

Once we find out Simon’s identity as Hans’ brother, we assume this is a simple revenge movie, before receiving the revelation that it’s all simply a distraction. He sends the city on a fool’s errand, while he gets the real work done. He had the better plan compared to Hans, believe it or not. Yes, it is fairly unbelievable that all those dump trucks would be able to gain access just because Simon claims they are the city’s engineering team, especially since most folks have been deployed to search for the second bomb, scavenging at over two thousand schools. A simple check would have foiled his plan, but hey, who needs to worry when you’re so damn charming? Simon remains calm and collected throughout, even eating an egg with relish when Zeus confronts him with a gun, though he didn’t have to worry there since the safety was on. Also, there wasn’t really a bomb at the school, because like Simon says, he’s a “soldier, not a monster”.

As McClane and Zeus go around the city playing the games Simon set up for them, the movie doesn’t take the conventional route of the pair simply following what Simon lays out. McClane never plays by the rules, so often the two will split up, because McClane knows you can’t just do what the bad guy wants you to do if you want to best him, so he colours outside of the lines. It is especially humourous when Simon and McClane have their first conversation, since the hero is foul-mouthed and spewing loads of threats, while the villain comes across more civilized and eloquent. It’s hard not to notice that most of the Die Hard franchise has an all American hero like McClane go up against foreign terrorists – the series is certainly a product of its time.

Simon’s true sentiments are displayed at the end of the film, where he double crosses his partner, taking the gold and his woman (the two have the weirdest pre-sex tension). As they speed away on a boat, leaving McClane and Zeus tied up to the bomb, we wonder how the two are going to get out of this, when suddenly, the bomb specialist demonstrating how the bomb works at the beginning of the film makes sense. When that scene was going down, I asked myself, why would this guy come in to mix two liquids and unnecessarily spark up a chair? Well, it was so McClane could replicate it later on.

You think Simon is getting away with it, and so did he, celebrating with his comrades before having a celebratory romp. But you know the movie can’t let him win, right? Because he nicely gave aspirin to McClane when he asked, they were able to find out where he and the team were hiding, all his plans foiled due to a nice deed. The film seems to be playing that angle up quite a fair bit, no good deed goes unpunished. Zeus gets dragged along, sliced and shot at, almost blown up, just because he decided to be a good Samaritan. Instead of going to such elaborate lengths to make McClane pay for his brother’s death, even though he didn’t like him (Hans, not McClane), Simon should have just killed him at the start.