Home
Gaming
What Would Destiny 2 Without Light Look Like?
Opinion
·8 min read

Rage against the dying of the light. 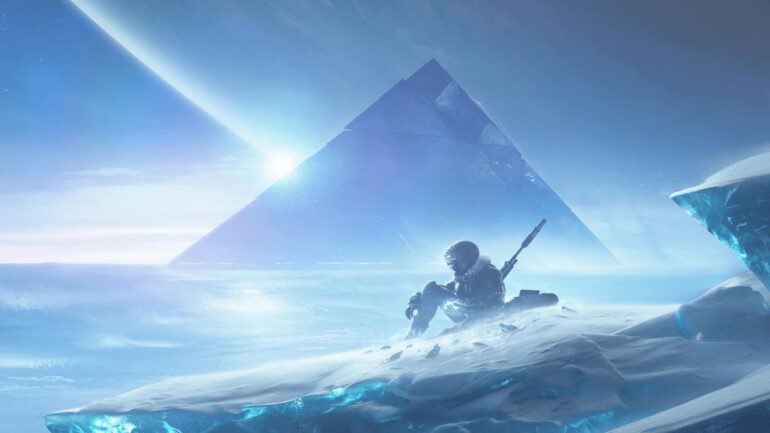 Lightfall is the final expansion of Destiny’s War of Light and Dark saga that will arrive sometime in 2023. We’ll all be looting caves, opening Engrams, and Traveler knows what else by then, but something is puzzling: what happens in Destiny 2 after all that?

The title, Lightfall, implies a finality of some kind with something coming to an end, and it very well may be the ability for Guardians to wield the Light. Lightfall’s cover image, revealed during a Bungie online event in 2020, has a black “Pyramid” ship from the Black Fleet on top of a white glowing circle in the background. In Destiny’s current story arc, the ships from the Black Fleet, the “Pyramids” as they’re also known, have the ability to drain or negate the Light from the Traveler in some way. If by chance the climactic moment of Lightfall is that we lose the Traveler, we lose the Light, and that means Guardians can’t use a majority of their powers anymore. So what could there be left to use in a world without the Light?

The Light was the ability to bend the natural elements of the physical plane to a Guardian’s will. Those three elements are Arc, Solar, and Void which dictate how the physical universe is bound. Oddly in Destiny’s lore, the powers of Void, even though they are represented as Light, have negative connotations as a method to have “…weaponized the unknown.” Void is represented as a negation, or the Guardian that wields it as “the ultimate negator” as once quoted by Ikora Rey. However where there is light, there must be darkness. There should be a polar opposite to these powers in the Darkness or elsewhere and there’s a possibility that the Darkness may give us more powers besides the cold death that is Stasis.

The Cold Heart of Darkness

Before Stasis was widely known, Guardians that were corrupted by the Darkness were present in the world with the most notable being Dredgen Yor, who would go on to create the weapon Thorn. Guardians have already been given a taste of the other side of the coin with the power of Stasis. A gift from the Darkness by way of Elisabeth “Elsie” Bray, better known as The Exo Stranger, Stasis allows Guardians to wield ice-like energy that freezes opponents and shatters them. The power is manipulated much like what many would perceive as ice, but Bungie writers have confirmed it’s not just ice.

Tying into real science concepts, Stasis may be based on the ideas of the most stable forms of matter and the temperature of Absolute Zero. When it comes into contact with other forms of matter in Destiny’s world, it’s stabilized or brought to a completely still state, seemingly frozen.

In Clovis Bray’s experiments on Europa prior to the events of Beyond Light, Stasis (known by Clovis Bray as “Clarity Control”) is used to “sterilize” Vex Radiolarian Fluid to a point where it can be used as a medium for Exo brains. It’s widely believed that the Darkness wants Guardians to use the power of Stasis as means to tempt them into abandoning the Traveler, but the descriptions so far are vague as to what this greater power actually is. Several lore books that mention Stasis’ presence is a “constant temptation” for Guardians to fully control. It is left with some characters wondering: “What else could it unlock inside of us…?” I believe as time goes on, there will be more and more revealed about what Stasis truly is.

The Darkness isn’t all just about fancy ice, though. During the Presage mission, we investigate a rogue distress signal on a Cabal ship called the Glykon Volatus and find the ship in ruins, seemingly taken over by a fungal-like growth. The growth grants us the ability to phase through impassable barriers called the “Egregore Link.” The term may sound like something from Destiny’s own dictionary of terms, but it’s rooted in real life. Egregore is an occult concept representing a distinct non-physical entity that arises from a collective group of people. We find out during Presage that the Cabal faction following Emperor Calus were experimenting with contacting the Darkness through a spiritual medium of sorts, known in the mission as the Locus of Communion. Some theories, especially this one by Reddit user /u/eldritchqueen, describes the Egregore spores as a sort of “suit” that the Darkness wears to physically manifest in the material plane.

Weapons of the Warmind

Outside of the Black Fleet granting us powers beyond our comprehension, there are other potential allies that would be able to grant us the ability to wield powers. People familiar with the Destiny 1 expansion Rise of Iron have also theorized about this as well, and that could be the ability to harness the nanotechnology weapon known as SIVA.

Originally created by Clovis Bray scientist Wilhelmina “Willa” Bray as a technology capable of building superstructures and terraforming colonies on other planets, SIVA would become one of the greater foes Guardians would face. During the events of Rise of Iron, the Guardian faction known as the Iron Lords faced off against a weaponized SIVA thanks to a set of instructions programmed into it by the Warmind Rasputin, another Clovis Bray technology. Since then, SIVA has been sealed inside areas of the Russian Cosmodrome known as the Plaguelands.

But recently with the crisis against the Darkness resulting in the near-destruction of Rasputin and an ongoing effort helmed by Anastasia Bray to restore the Warmind to its full potential, there’s a high chance we could be seeing a resurgence of SIVA as a controlled weapon against the Darkness and its allies. During the events of the Destiny 2 expansion Warmind, Rasputin aided Guardians in the creation of several weapons capable of taking on the Hive and Cabal forces such as the Valkyrie and the Warsat Network. During the story it was hinted that Rasputin did want to reach out and communicate with us Guardians more to learn about our powers and to better understand who he is meant to defend.

With the ability to control SIVA, Rasputin could very likely repurpose the technology as a new superweapon against the Darkness. Guardians would likely be using a variety of weapons and powers similar to how the themes of SIVA and Rasputin are now – Cubical shapes, geometry, and possibly something akin to spreading an infection of Nanites. The weapon Outbreak Perfected demonstrates that SIVA can become weaponized as something purely offensive, which can lead to some exciting mechanical possibilities. Imagine a Titan being able to stack SIVA nanites as armor, or a Warlock spreading SIVA like a virus and infecting enemies to become allies, or a Hunter using SIVA-enhanced throwing knives to spread the Nanites? Possibilities for exciting mechanics are limitless with Rasputin and SIVA weapons, and frankly these are the most likely candidates for “Lightless” Guardians.

The Death of Nolanbot (or Not…)

Another interesting question is what could happen to our little partner who’s been following us for more than 8 years, Ghost. If the Traveler dies, our Ghosts will likely either die with it or become these sentient drones with all the usefulness of an Alexa speaker.

During the events of the Red War when Dominus Ghaul trapped the Traveler within a cage that suppressed the Light from all the Guardians, our Ghost only barely managed to stay alive. The reason why was likely due to the fragment of the Traveler that fell off somewhere deep in the European Dead Zone that still had latent Light power in it, which granted us the ability to wield the power within it to stop Ghaul and destroy the cage. But if the Traveler is outright destroyed by the Black Fleet or some other force of the Darkness, it’s likely Ghost is not going to survive it. Completely severing the connection Ghosts have to the Light will likely result in their deaths.

What we could see as replacement Ghosts was a sneak peek of what we saw with the arrival of Elsie Bray in the events of Beyond Light. Seen in several cutscenes, a small, fish-like robot floats next to Elsie Bray in many of the same ways as a Ghost would. It’s not known if this thing allows Elsie to remain immortal like a Guardian’s Ghost would, but it does seem to serve similar purposes to a Ghost. In a mechanical sense of Destiny’s layout, it’s impossible for us to not have some cool little thing following us around to help us navigate the world and maybe do some kind of resurrection if we’re unlucky enough to fall in battle. A Ghost of some kind is possible, but what that could look like is anybody’s guess. It could be anything from a new gift from the Darkness or something from Rasputin that’s going to pull us back up.

An Unlikely Ally or Two

Another possible ally could be some sort of repair technology sent by Clovis Bray in the far-off future. Elsie Bray has proven some form of time travel in the Destiny universe is possible and Clovis Bray could be a new partner in crime for us down the road. Much like gaining the trust of characters like the Cabal Emperor Calus, Clovis Bray plays a very neutral stance in that while he seems to benefit us Guardians, he’s really just advancing his own gains while not pissing us off.

Clovis’s Exo technology has proven to be much more advanced than previously assumed. Many of his machines and technologies actually rely on the use of what he calls “Clarity Control,” which is revealed to be a power gifted from the Darkness to harness foreign matter to his own, less advanced machinery. This caused a rapid evolution of Clovis Bray’s research, allowing him to do such things as transfer human consciousness into a surrogate body that’s effectively immortal with a couple small catches. It’s highly possible in an alternative future that Clovis Bray lends his genius and resources to help develop some form of adapted Clarity Control to create a weapon or powers that are harnessed via raw technology to our own will.

Destiny certainly has options on where to go next if we have to say goodbye to that giant, burnt ping-pong ball in the sky by 2023. The questions of what will happen next or what we could see in a different future is entirely up in the air. If Bungie has shown anything in the past year, it’s that trying to theorize a likely narrative outcome is not going to turn out to be what you thought it was.

READ NEXT: 25 Best PS4 Multiplayer Games You Should Play