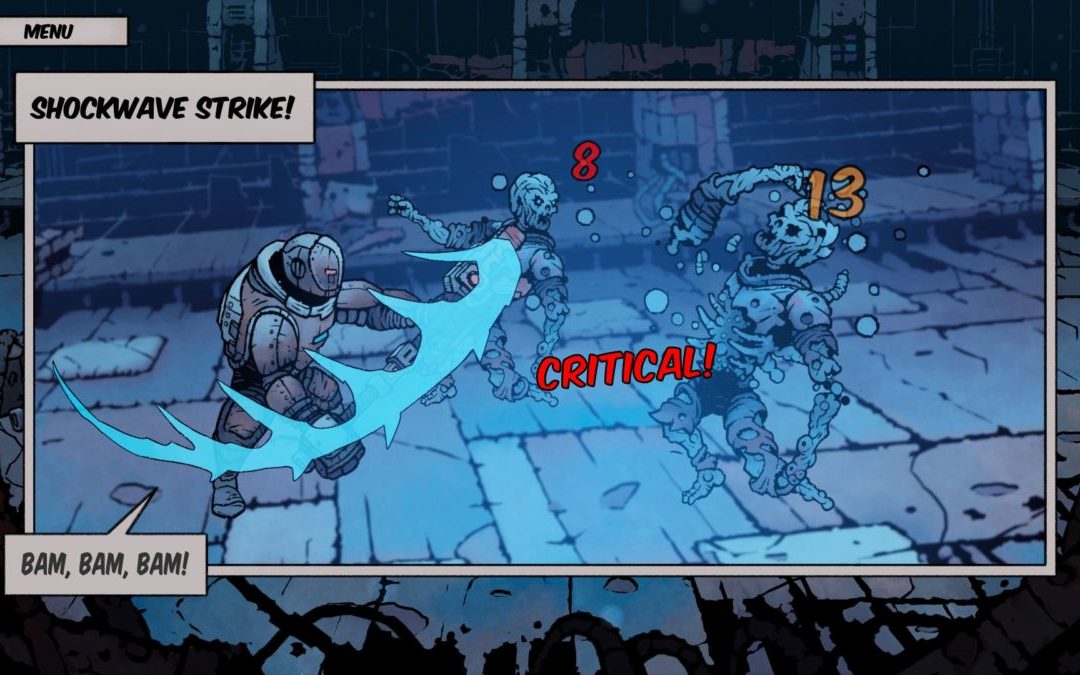 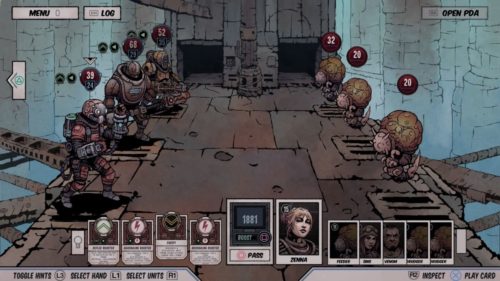 The influx of roguelike RPGs within the indie games space has exploded over the last decade. Often, an eye-catching art style being the quickest way to distance a game from the competition. Deep Sky Derelicts has this in spades, but does it have the gameplay to back up its gorgeous aesthetic?

Developed by Snowhound Games, Deep Sky Derelicts: Definitive Edition brings the PC version’s tactical card-based gameplay to consoles. The player is tasked with locating a mysterious mothership vessel that will take them on an exploration through the dangerous reaches of the galaxy. In their hunt for the mothership, the player will explore other nearby derelict vessels for data that will lead them closer to their goal. 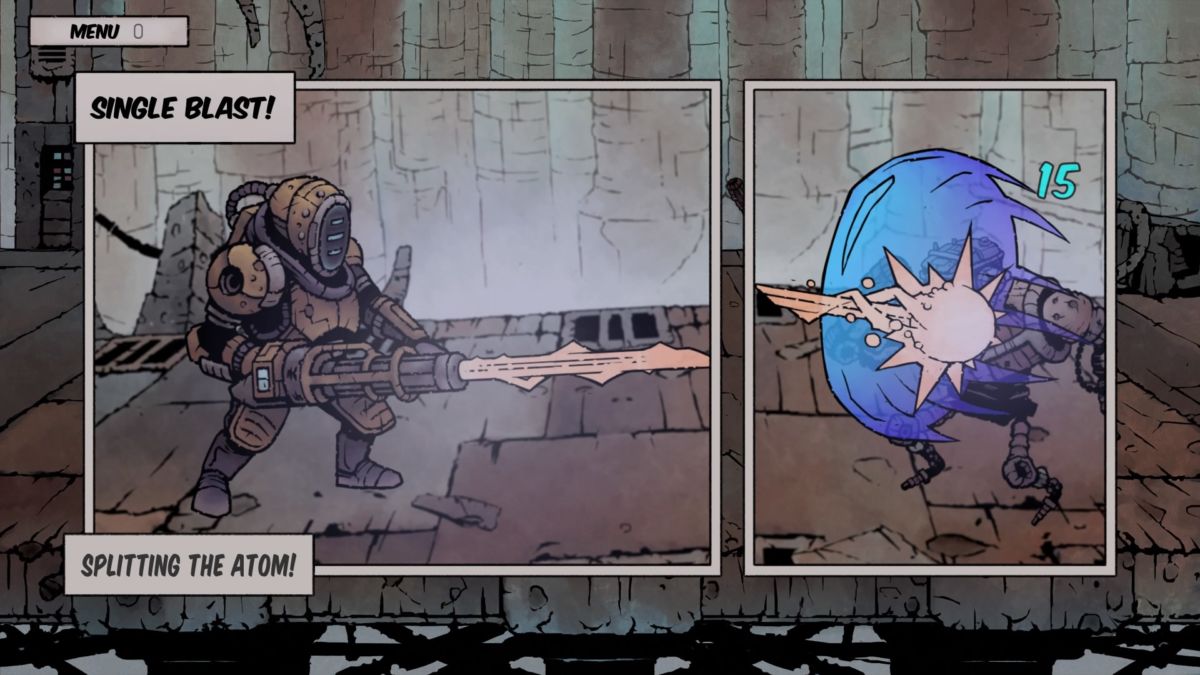 Derelicts are home to missions, loot, and, of course, all manner of hostile bandits and alien species. The player’s time is split between a hub world and exploring derelicts or dungeons, leveling up and acquiring new mercenaries along the way.

While Deep Sky Derelicts may share similarities in its gameplay structure to other RPGs, it crafts its own identity with its unique presentation. The game’s gorgeous graphic novel aesthetic captures its gritty sci-fi atmosphere with highly detailed environments and character models. Every enemy is memorable, running the complete sci-fi pantheon from grotesque parasitic aliens to decrepit zombie-esque bandits. So as gratifying as its art style is, it’s a shame that the gameplay itself gets in the way of enjoying that. 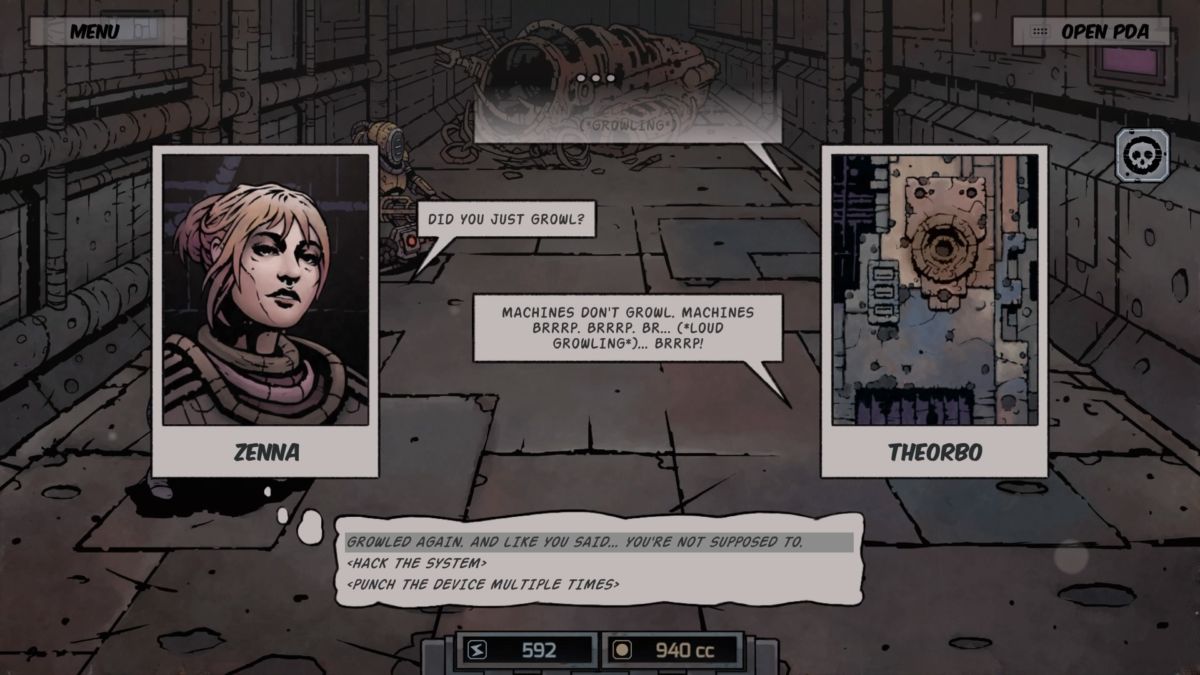 The opening hours of the game are an exercise in patience. There’s very little hand-holding, as the player is instructed to form a three-person squad of mercenaries right out of the gate. For those who aren’t self-starters, or prefer their RPG experiences streamlined, this will not be for you.

Pouring over tombs of stats and class types is the only way to understand how potential mercenary classes operate, and even then you won’t really know until your first taste of combat. It is an uncomfortable predicament, being asked to make decisions before having a chance to understand how the game’s mechanics work. Though once the player makes it through this momentary hesitation, they will learn that no decision in Deep Sky Derelicts is final. 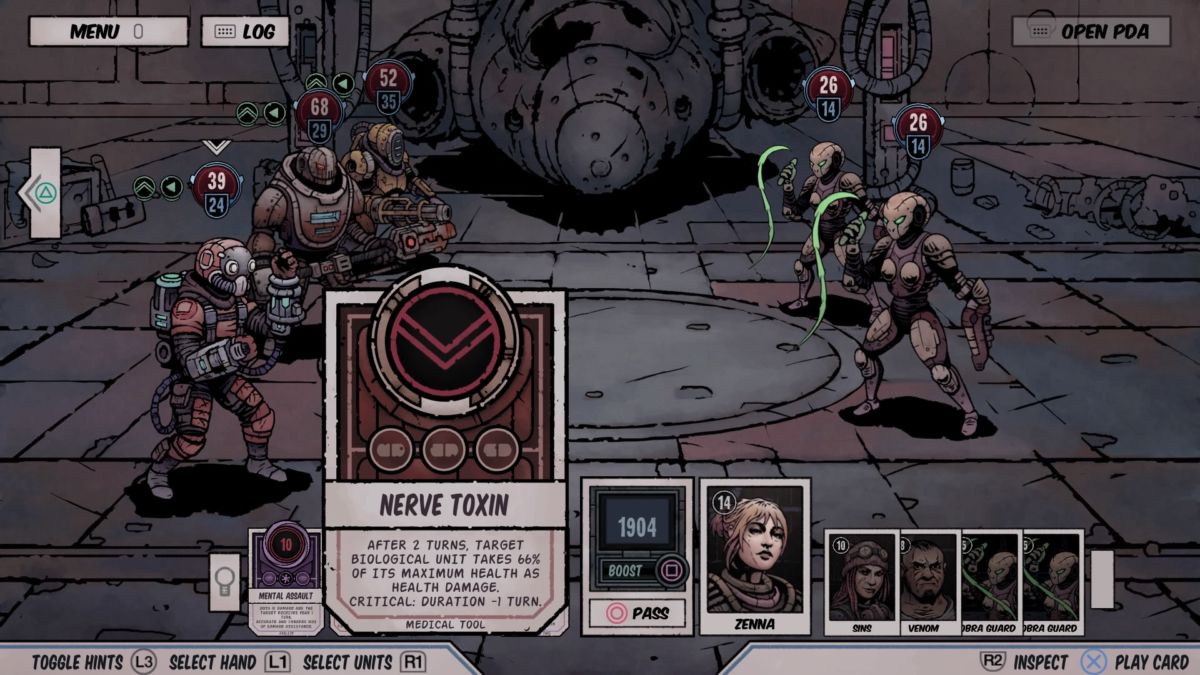 There is an abundance of customization options for tweaking the player’s mercenaries, all accessible through the vessel Perecido. The Perecido acts as a hub world, offering standard RPG amenities such as healing, an equipment shop, ability upgrades, as well as providing somewhere to take on new contracts. It’s essential to frequently return to the Perecido to not only recharge energy, but also to ensure that your squad’s gear is in tip-top shape. Tweaking your squad’s abilities, equipment, and hiring new mercs is vital to surviving more than a few squares on a derelict. As the player will quickly learn, death comes quickly for the ill-prepared.

The cost of these various upkeeps does not come cheap. Taking on contracts is imperative to keeping your squad flush with cash, as well as to provide XP bonuses used to boost merc abilities. 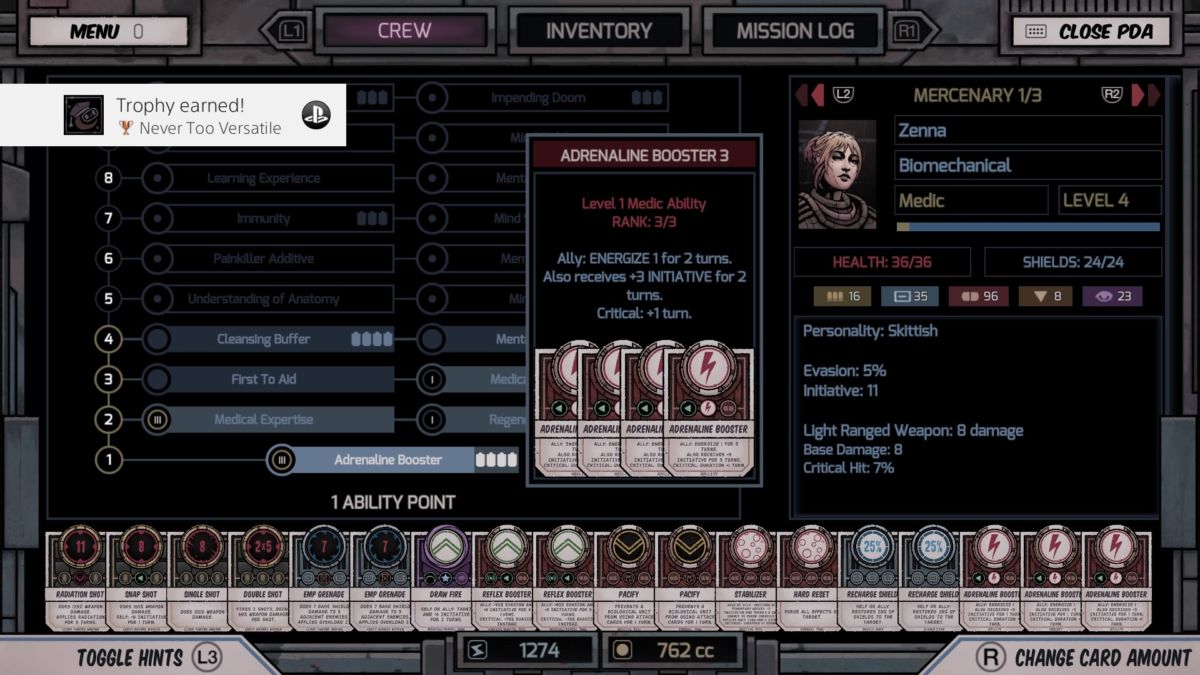 These abilities are put to the test upon docking at a derelict. The player will traverse a grid-based map covered by a fog of war. Each movement drains the player’s upgradable energy meter, which is vital for keeping their mercenaries alive. Before moving, the player has the option of “scanning” their surroundings. While scans consume additional energy, they can reveal enemies and item locations, removing the likelihood of any nasty surprises.

While the layout changes with each derelict visited, their contents remain relatively the same. Enemies patrol the derelict, with loot caches and discoverable missions scattered throughout. I couldn’t help but fall into a formulaic rhythm of scanning my surroundings and making a beeline for loot indicators. The only thing that breaks up the eventual monotony that sets in are discoverable, derelict-specific missions. 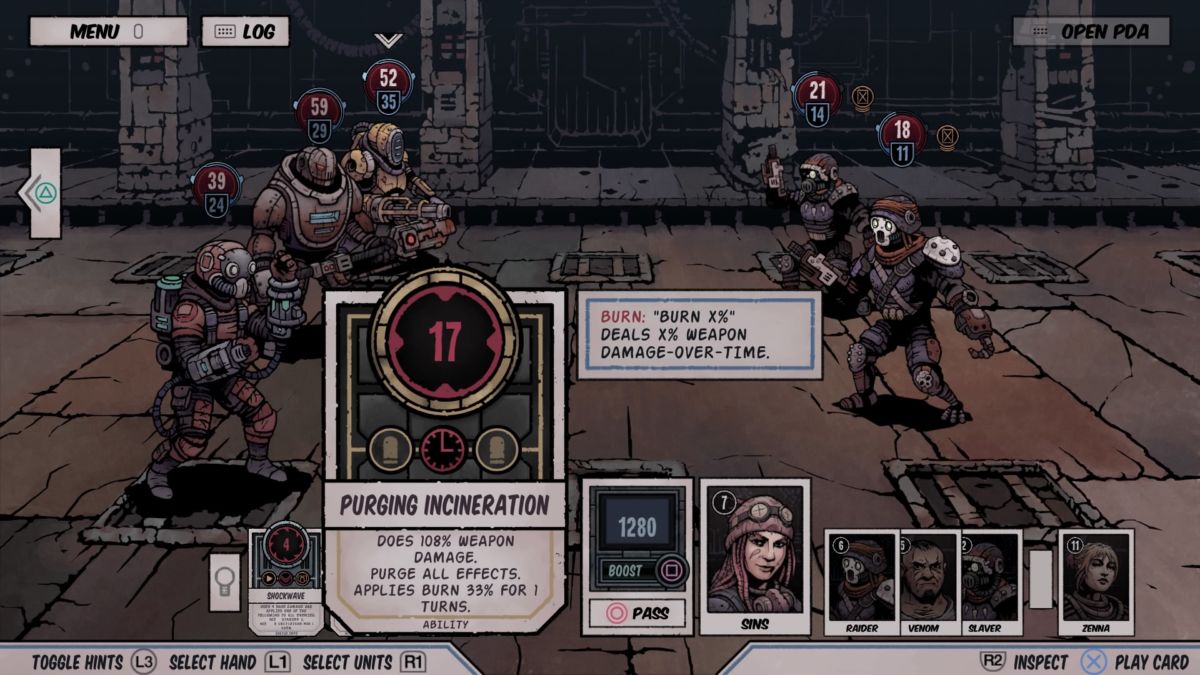 While the main objective is recovering a derelict’s data cache, there are also unique discoverable missions. These can be simple fetch quests, or more memorable ones such as a robot trying to decide if it is human or a robot. These missions are a highlight, as they interweave dark humor with a traditional sci-fi narrative, so it’s a shame that they’re outnumbered by fetch quests.

Mission will often conclude with the player engaging in a challenging bout of combat. Combat differs from other dungeon crawlers as the player utilizes offensive and defense cards to resolve the battle. Abilities ranging from attack to buffs and debuffs are tied to the merc’s equipment, adding an emphasis on keeping their deck well-maintained.

The early hours of combat were mostly trial and error, given the dense, stat-heavy nature of cards. Deciding when to play specific offensive or defensive cards naturally plays a large part in how combat unfolds. Combat mostly provided challenges that were in line with my squad’s current level, though occasionally fights far exceeded the recommended level. The biggest issue its card combat faces is the inherent randomness of card draws. Even the most ironclad strategies could fail due to not having the right card, making already challenging gameplay turn infuriating.

The randomized nature of combat and some punishingly uneven fights results in combat never feeling as satisfying as it should. My sigh of relief at barely surviving an encounter was short-lived as the reward for surviving was often a slight stat bump or junk loot. The climax of these challenging fights or unique story missions was often met with a shrug, as I prepared to set off to another derelict to do it all over again.

Deep Sky Derelicts is an amalgamation of standard RPG ideas and a gorgeous visual aesthetic but lacks the satisfying combat that would fuel its longevity. If you’re a die-hard RPG stat cruncher, then you will likely get more mileage out of the Definitive Edition’s base and DLC content packs. But for those after a more rewarding experience, look elsewhere amongst the stars.

A copy of Deep Sky Derelicts: Definitive Edition was provided by PR for the purposes of this review. 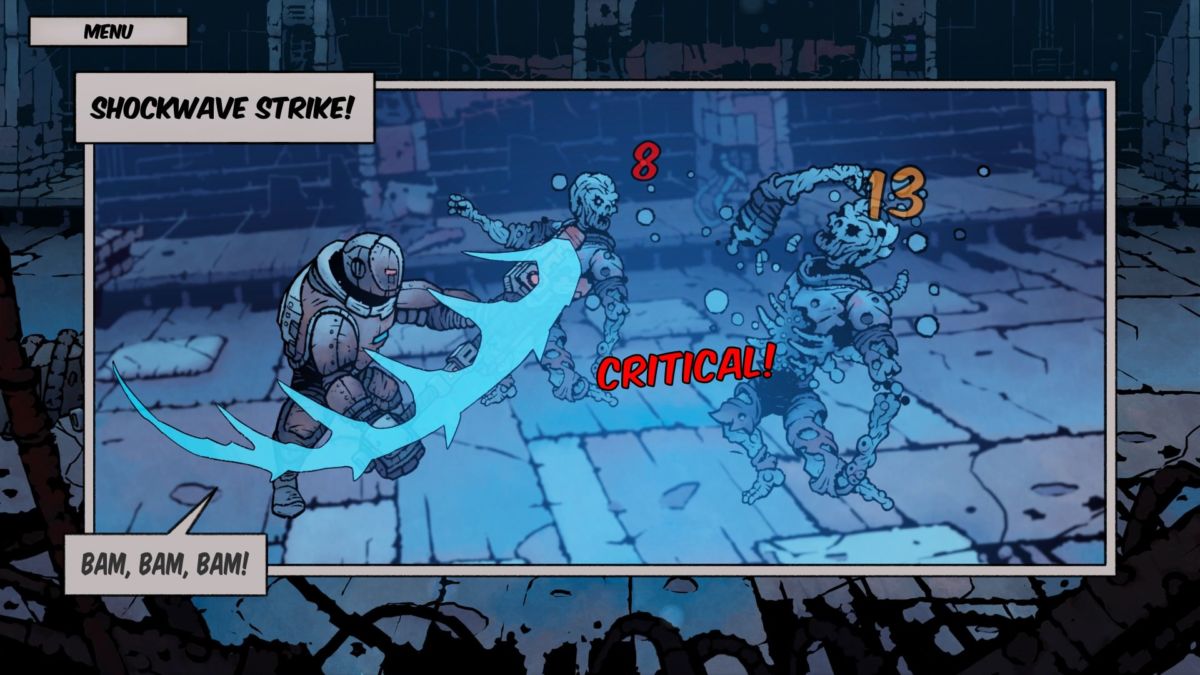