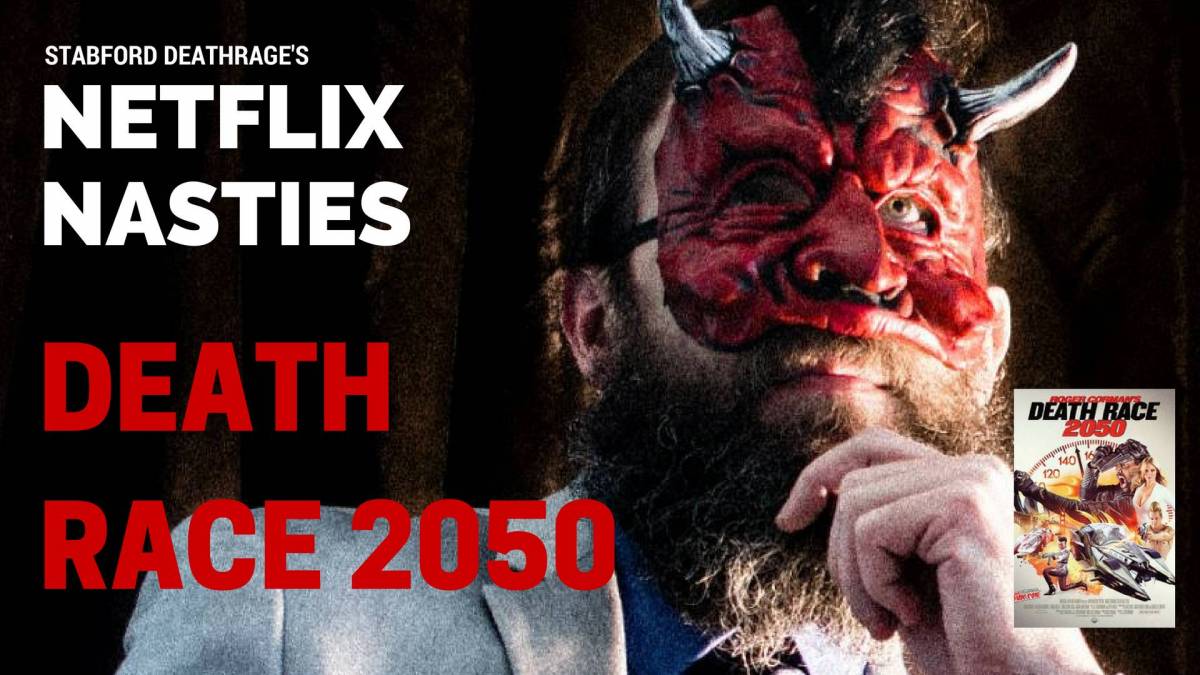 Pedestrians are occasionally run down for points in this ham-fisted, satiric sequel to the ’70s film.

Irritating race commentators with outlandish hairdos are green-screened in front of stock photos that wouldn’t be out of place in a corporate training webinar, and then edited into crowd scenes of unconvincingly enthusiastic race fans who may or may not be watching the Death Race amidst unconvincing CGI explosions and airborne entrails.

Catatonic spectators in their post-apocalyptic, bombed-out hovels pretend to watch the race in virtual reality, but the VR glasses are merely swim goggles. Race cars look like station wagons with air-brushed chunks of foam rubber and fiberglass wading pools attached to them, and details wiggle and wobble at what the film makers consider high speed. Stereotypical characters seem to appear at random. Someone raps a song with lyrics consisting of the words ‘Kill. Drive. Kill. Drive.’

In this derivative dystopia, canned spray cheese is an antidepressant, which is particularly ironic if you’ve ever had the misfortune of ingesting canned spray cheese. Arterial spray is abundant. Onscreen graphics and scores appear as pedestrians are unconvincingly run down, giving the film the appearance of one of those Japanese game shows where contestants are repeatedly struck in the groin.

In a surprisingly topical moment, and by that I mean I wouldn’t be at all surprised if this film was completed two weeks ago, tears are threatened to be drunk, and a wealthy, toupee-wearing autocrat who’s easily goaded and offended rules the land as the contestants run over whiners, pussies, and immigrants in orange jumpsuits to a generic rock soundtrack. The phrases, ‘It’s hard to turn global famine into clickbait’, and ‘Who loves virgins, who loves chicken wings? The Almighty says there’s a Hooters in the sky, and it’s time to martyr-up’, are uttered.

A kitten playing with a butterfly in traffic causes a crisis in steering and morality, resulting in a sandwich. A scene in Bechdel’s Bar suddenly segues into girl-on-girl armwrestling and a homoerotic muscleman pillow-fight. At one point, the 180-degree rule is broken, but I don’t think it really matters. An intermittent high speed car chase involving a chicken complete with a car-door-to-car-door fistfight at the breakneck speed of almost 10 mph causes extras to hurl their swim goggles in the air and half-hearted revolution.

In spite of gratuitous nudity, automobile crashes, explosions, and gunfire, Death Race 2050 still bores. Its insistence on plot and character development slows the tempo of an already tedious film. A rich vein of political satire could’ve been mined, but the surface is only briefly scratched. Death Race 2050 is in on the joke, the viewer is in on the joke, but the joke just isn’t very funny. Quite often, the film resembles Mad Max: Fury Road more than the source material. Death Race 2050 is mildly recommended if you like stuff that sucks.