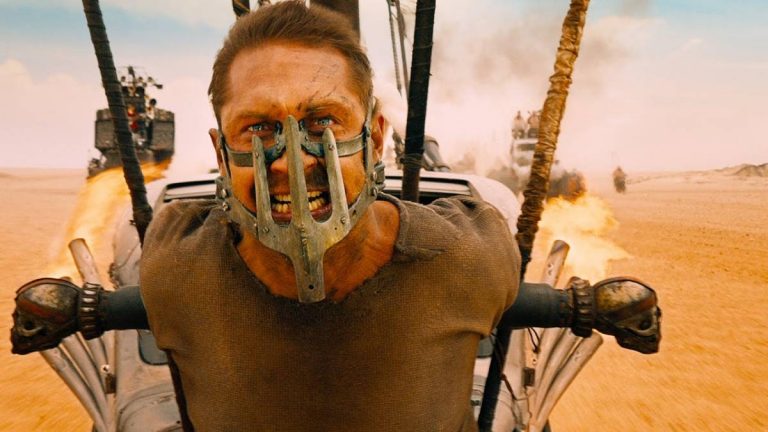 A question which seems to come up fairly regularly when discussing action movies is whether there’s any real market left for the kind of heavy-handed, cast-iron films that dominated the 80s and 90s once the grind-house DNA had slithered its way into mainstream Hollywood cinema.

Anything that does get made in that context these days always seems to be pretty heavily reliant on nostalgia or indeed a claim to a resurrected franchise, but fails to dig anything new or particularly interesting out of the toolbox. One of the reasons Mad Max: Fury Road succeeds (spoiler alert, I really liked this movie) is because it doesn’t fall back on being some kind of protracted homage to the old trilogy (or any part of the post-apocalyptic heavy metal stratosphere), it lives in that world, sure, but it’s much more interested in exploring ideas about how that world might function. Oh, and blowing your fucking brains out.

Like so many recent revisits to old franchises, this does not act as a direct sequel, nor a direct reboot. It follows a man named Max who is haunted by the deaths of his wife and child, same as the old one, but there’s no guarantee that this is the same Max. What is certain is that this world follows the same rules, it’s arid, hostile and fuel and water are equally scarce and valuable commodities. Things are a lot more grandiose this time around though, whereas in Road Warrior the action was limited to a hodge-podge gated settlement guarding a precious tanker from ravening outsiders, in this film much of the landscape is under raider rule, with the largest population epicenter being the Citadel. It’s a vast, cavernous, carnivorous place presided over by Immortan Joe (Hugh Keays-Bryne, memorable as the almost equally ridiculous Toecutter from the original), a man bent on abusing the desperation of the dying embers of humanity to style himself as a deity. He keeps his people in line by withholding water, conditions the boys into bloodthirsty zealots eager for death and keeps the girls for milking and breeding stock. He’s Roch Thériault for the post-apocalypse, in the real world he’d be squatting in an abandoned grain mill painting made up runes on the walls in rat blood, but in this world he’s a God. 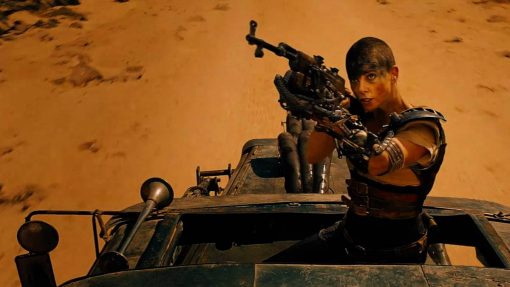 This is one of the things I always enjoy about Mad Max films, in most stories about the world after some population-destroying calamity humanity is a warped, but recognisable reflection of its past self, more desperate, perhaps more resourceful and much more callous, but still largely the same. Here enough time has gone by that all the old values have gradually fallen away until what remains bears almost no resemblance to the world we know. This is humanity gone feral, like my friend Steve when he drinks too many pints of Blue Moon. As with Road Warrior and Beyond Thunderdome, Max doesn’t elect to get involved in anything bigger than himself, it happens by accident, he gets captured by Joe’s War Boys and gets taken back to the Citadel to be used as a ‘blood bag’, since he has type O blood. This leads him to end up getting lashed to the front of a buggy, in pursuit of Imperator Furiosa (Charlize Theron), a rogue disciple who has taken a war rig in order to liberate Joe’s ‘wives’ from the living nightmare they’d been resigned to.

That set up provides the framework for one of the most relentless, jaw-breaking chase movies I have ever had the alarmed pleasure of witnessing. This film is two hours long and it spends perhaps 15% of that time at rest, everything else is wheel-spinning, metal-munching, skull-splitting lunacy. This is a fast, heavy film. It’s also the kind of thing I would throw down immediately if ever met with the argument that violent cinema is artless. The cinematography is nothing short of staggering, John Seale has done some great work in the over 50 years he’s spent as a DoP but this is his homecoming. He came to the shoots in the Namib desert and Broken Hill armed with an arsenal of Alexas and Cannon 5Ds supported by a myriad of different crash cams, vehicles were always rigged and ready to go and for the full 138 days the shoot never slowed an inch. There is a fascinating 2 hour Q&A by Seale himself about how the film was shot which I highly recommend watching if you’re any kind of film-making appreciator. Beyond that, director George Miller has stated that 90% of the effects are practical, which is a colossal achievement in this saturated CGI world, Fury Road is one of the most tangible action films I’ve seen in a very long time, the only other recent effort that comes to mind is The Raid. 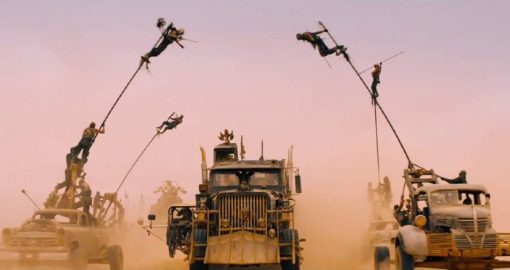 It’s not an ugly film though. It’s full of ugly machinery and uglier people, many of whom meet the ugliest ends you could possibly imagine, but the sweeping views of rolling dunes, winding canyons and blazing sunsets are entrancingly beautiful. One particular wide shot which sees Furiosa driving the war rig into a biblical dust storm nearly brought a tear to my eye. Many of the protagonists are beautiful too, in their own way. Like Road Warrior and Beyond Thunderdome to a lesser extent, Fury Road isn’t concerned with machismo tales of revenge or the battle against evil, it’s about compassion, more than anything else. Max kind of ends up being peripheral to a great deal of what goes on. As usual it’s his ability to drive, fix engines and beat people to death when necessary that make him significant but it’s Furiosa who sits at the centre of the story.

Her desire to carry the wives to a better life is a soulful, engaging motivation and I found it interesting that during many of the insane set pieces I was forgetting to be blown away by the action because I was so desperately concerned for their well being. Many have claimed that it’s a feminist film and I think that Miller has always tried to inject at least some of that quality into his work. Aunty Entity remains both one of the most mercurial, fascinating antagonists in any film of this kind and proof that Tina Turner can actually act, but Furiosa might be the most compelling character ever to grace a Mad Max film, with Nicholas Hoult’s Nux not far behind, providing an interesting counterpoint to Bruce Spence’s unforgettable turn as the gyro pilot in Road Warrior.

The wives all get their share of exposure too and while I’d have liked to see them get a little more developmental time thrown their way, it was refreshing to discover that the film makes virtually no attempt to objectify them, barring one early shot. They are scantily clad and painted in that Raquel Welch sort of way, but that’s in-keeping with the plot, Joe wanted them to look like sultry, angelic figurines but you’re not meant to find it titillating as a viewer, quite the opposite, especially given that two of them are pregnant, a constant reminder of the nastiness they’re fleeing from. They’re also uniformly well played, particularly Riley Keough as Capable and the ever-excellent Zoe Kravitz as the awesomely named Toast the Knowing. 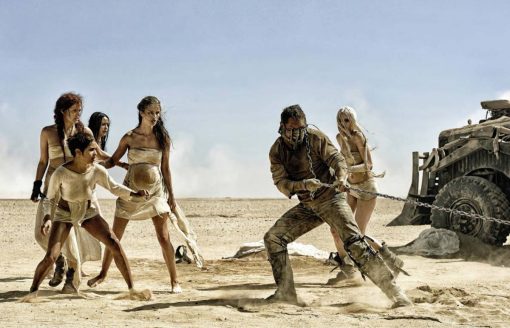 Of course, as much as Miller’s consistent record of taking the time to build worlds in this way is worth paying attention to, I can’t let this review end without taking a really good look at the action itself. The film often feels like one long, uninterrupted chase with various different choke points, each one compounded by seemingly insurmountable odds. Furiosa and Max have one rig, limited weapons and the only thing saving them from total annihilation is Joe’s refusal to put his wives in harm’s way. He, meanwhile, is coming after them with everything, drafting in war bands from neighboring settlements Gas Town and the Bullet Farm to form a colossal armada of pig iron, with spiked wheels, flame-throwers and explosive spear wielding War Boys suspended on long swaying poles like ticks perching on blades of grass looking for a host.

There’s even a truck with a huge stack of amps on the front and a guitarist suspended on a harness. The guitar spits fire. Small wonder members of Cirque du Soleil and Olympic athletes were drafted into the stunt team. Every roll, crash, explosion and lick of flame is almost perfectly timed and framed.

[Tweet “It’s not perfect, but the blockbuster landscape hasn’t seen anything as unique, intelligent and risky as this in a long time”]

I don’t know that this film is necessarily better than Road Warrior, or that it’s even trying to be but when you watch the older Mad Max films it can be easy to forget just how unique they were at the time, due to how much of their influence presides over everything that’s come out since, but nothing can prepare you for Fury Road. It’s one of the only $150 million films I’ve ever seen where you can tell that every cent was put to good use, nothing went to waste. Miller had been trying to make it since 1998 but it had been languishing in development hell all that time, 9/11, the Iraq War, Mel Gibson’s departure from the project, the death of Heath Ledger and numerous other things constrained it, even in 2009 when shooting was first due to begin a rainstorm in the Namib desert revitalized the landscape and coated it with plant-life, rendering it too colourful to be an appropriate location.

Fury Road definitely feels like the culmination of all that preparation, all those setbacks and all that time to really figure out how to do it right. It’s not perfect, but the blockbuster landscape hasn’t seen anything as unique, intelligent and risky as this in a long time. Instant classic.