Dead Man Songs: Music and the Craft of Writing 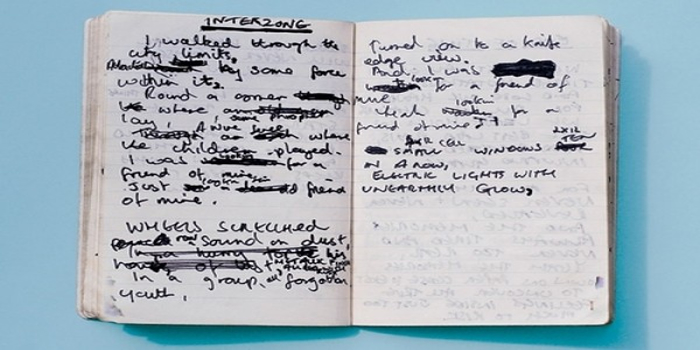 For roughly twelve years, I have tried to write a poem that describes the way Joy Division’s unforgettable “Disorder” track made me feel, the first time I listened to it. I also want to do this, without ever actually making reference to the song itself. I feel like that’s cheating somehow.

For roughly twelve years, I have failed miserably.

That’s not to say that I’m trying to write some sort of sequel to it. That’s not what I want to do at all. It’s difficult to explain my relationship to music, in terms of my own work as a writer.

Does any of that make sense? I’ve never been able to articulate the relationship between music and my writing to my satisfaction. I realize different writers write differently, but I like meeting writers who use music as an inspirational tool in their work. It doesn’t even have to be the same things I listen to. I just like knowing that music is so complex, it can assist our lives in a seemingly endless assortment of ways.

And one of those ways is in how it helps writers to write.

And it doesn’t help every writer, and I do actually like even that aspect to it. Some writers work best in deep freezer silence. Others need the familiar chaos of a coffee shop or some other venue. Some writers have to work while their three children are trying to murder each other, burn down the house, or both. There are so many things that writers usher into the rhythm of their working routine, of how their mind best functions under the need/desire to be creative. Some are by choice, and some have to be embraced as inevitable aspects to the day. Even the ones I can’t even imagine using in my own life and work are interesting to me.

Music is my personal favorite. I love all the different ways it inspires, challenges, or simply moves alongside a writer’s creative process. Any artist’s creative process, really. If you’re using music for meaningful background noise, I’d love to talk to you about that. I want to know which songs, albums (remember those?), and artists help you get to that mindset you need to write. Even if you don’t think I’d like those artists or songs (why would you even care if I did? This isn’t a litmus test, for crissakes), I still want to know about them. How writers write has always been fascinating to me. I don’t know why.

But if you’re like me, you need a wide library of music. You need things that can gently contribute to the energy of the room and your mood, functioning as a sonic backdrop to what you want to accomplish in the best way possible. However, you’re also going to turn to music for inspiration. As you may or may not know, there are countless breeds of inspiration for a writer. There is direct inspiration, in which the lyrics make you remember something from your own life or daydreams. There is also what I like to call indirect inspiration, which is when something a little less obvious about a song grabs you.

It can be the mood of the song, whether it’s the intended mood, or just the way the song makes you feel, but it can also be something else.

I’ve never felt compelled to write something that was clearly inspired by Springsteen’s “Ghost of Tom Joad.” However, I have tried to write things that were inspired solely by what that song does to my psyche, every single time I listen to it (these days, I’m generally listening to the newer version, featured on the High Hopes album).

There are a lot of songs like that for me. One of the main reasons why I look for new music is because I want to find new songs that will do that for me. Certain songs from artists like PJ Harvey, Springsteen, Leonard Cohen, Tom Waits, Mos Def, Nick Cave, and others are always going to be reliable. Especially when you consider that certain songs can take on new meanings, as you get older, and pick up new experiences and thoughts along the course of your life. But I love it when I listen to a song for the first time, and I actually have to stop whatever it is that I’m doing. I have to listen to it again, right then and there, if I’m going to have any hope of getting back to functional reality.

I’ll admit it’s getting harder to find those new songs, but I do still come across them. For personal, silly reasons, I’m pretty grateful for that.

So when I’m using music to write, which is pretty frequently the case, I need background, but I also need newcomers (new to me, at least) who may have an entirely new way of explaining something to me. I look for that to a certain degree in the films I watch, and I certainly look for it in the writers I read.

For me, great songs are essential to my creative health as great short stories, novels, or poems.

When I talk to the writers who use music to inspire and charge them on various levels, I want to know about it all. I love to see what songs they’re using. I’m fascinated by the ways in which someone else maintains a relationship between music and their own creativity.

Music is a complex thing. I’m never going to write songs or learn to play an instrument. But I am going to always going to trust music to save my life, even if my life at that moment is solely focused on writing something that’s at least going to appeal to me.

When that dries up, I’ll probably quit.

But here’s the thing: I severely doubt music will ever let me down, when I need it the most.