Days Gone Is A Good Game With A Bad First Impression

While its first ten hours are nothing special (and even arguably just plain terrible), Days Gone eventually becomes something almost excellent. 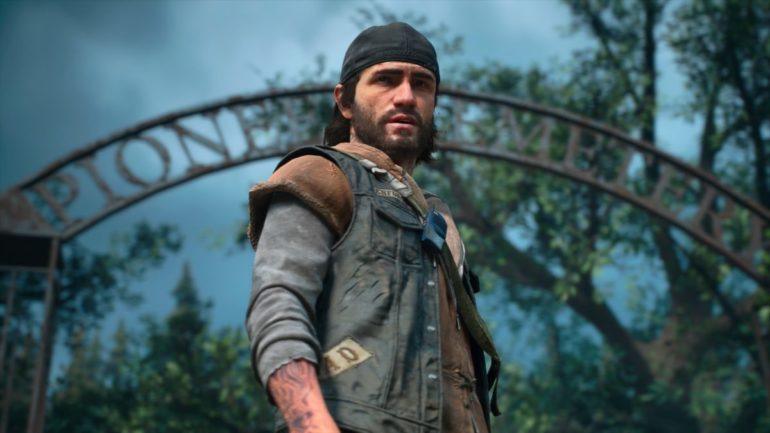 Days Gone makes one of the most truly terrible first impressions I’ve ever seen in any AAA game. The hero is just odd, the stamina is miserly to the point of ridiculousness, glitches are plentiful (and hilarious) and the guns feel about as effective as shooting spitballs at the wall. The first ten hours or so of Days Gone are a slog that you couldn’t be blamed for just walking away from, but stick with it: the “click” eventually comes and when Days Gone really starts to grease its wheels, you’ll be glad you stuck around.

I was more than slightly underwhelmed by Days Gone in its early goings, believing it to be an oddity that was chopped and changed a little too much in development for it to be consistently fun. While those signs are certainly still there, almost all of my early qualms with the game are now gone and I am having a great time cruising around desolate America as Starkiller with a nailed-up boat paddle for company. 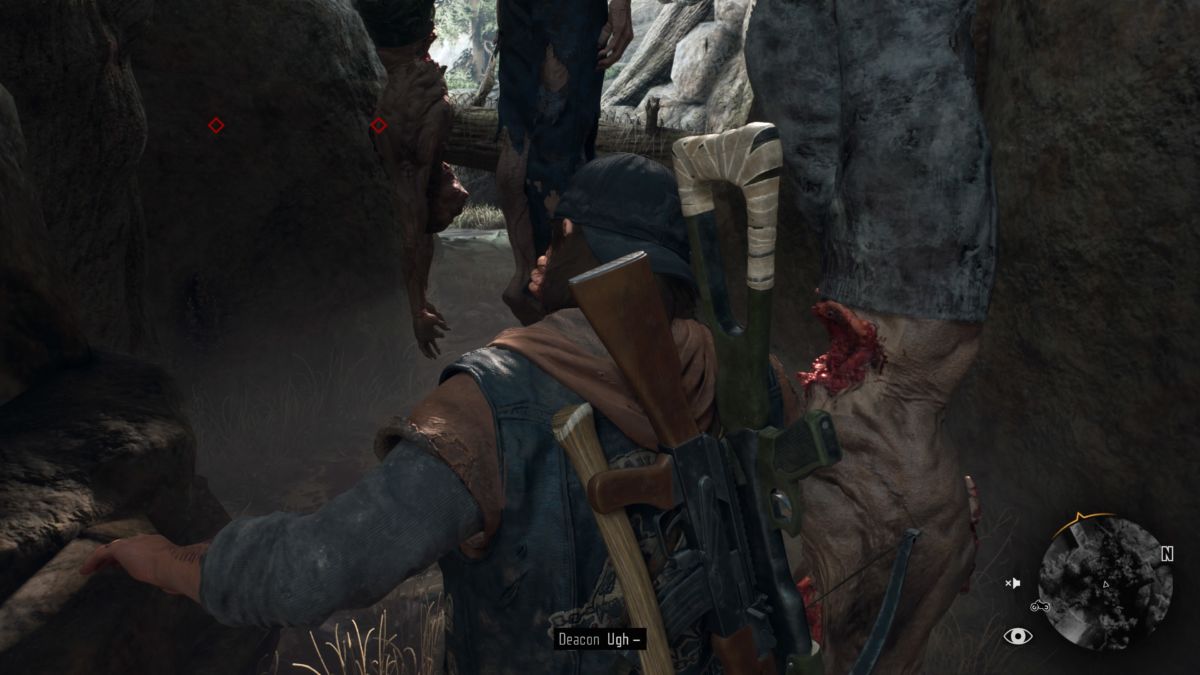 Days Gone makes the cardinal sin of your character being almost incompetent in their abilities at the start of the game. Despite surviving for two years at the end of the world, Deacon is unable to run for more than five metres without getting gassed, and neither does he know how to apparently aim a gun. Days Gone’s ranged combat is unusual (a word I find myself using often when describing this game): your crosshair rarely ever completely tightens up, so there’s every chance you may miss what seems like a sure shot. Similarly, you use stamina to sprint and to melee attack, but with Deacon apparently being about as healthy as an emphysemic sloth, expect to be cursing him for the first few hours.

This early irritation also extends to the world traversal with your souped-up motorcycle being stolen and scrapped early on, because of course. You are forced into a bucket on wheels with a max speed of gravy that you have to slowly and painstakingly upgrade in a similar fashion to Mad Max, a game that it shares a good amount of DNA with but ultimately has a much stronger through line than. In Mad Max, the overall narrative is simple: pimp your ride, kill the big bad — it really doesn’t try to be anything other than that. In Days Gone, however, it’s far broader and actually deals with themes like loss with remarkable nuance and patience. Much like a lot of early Days Gone, though, you would be forgiven for not waiting around to see it really start to bloom. 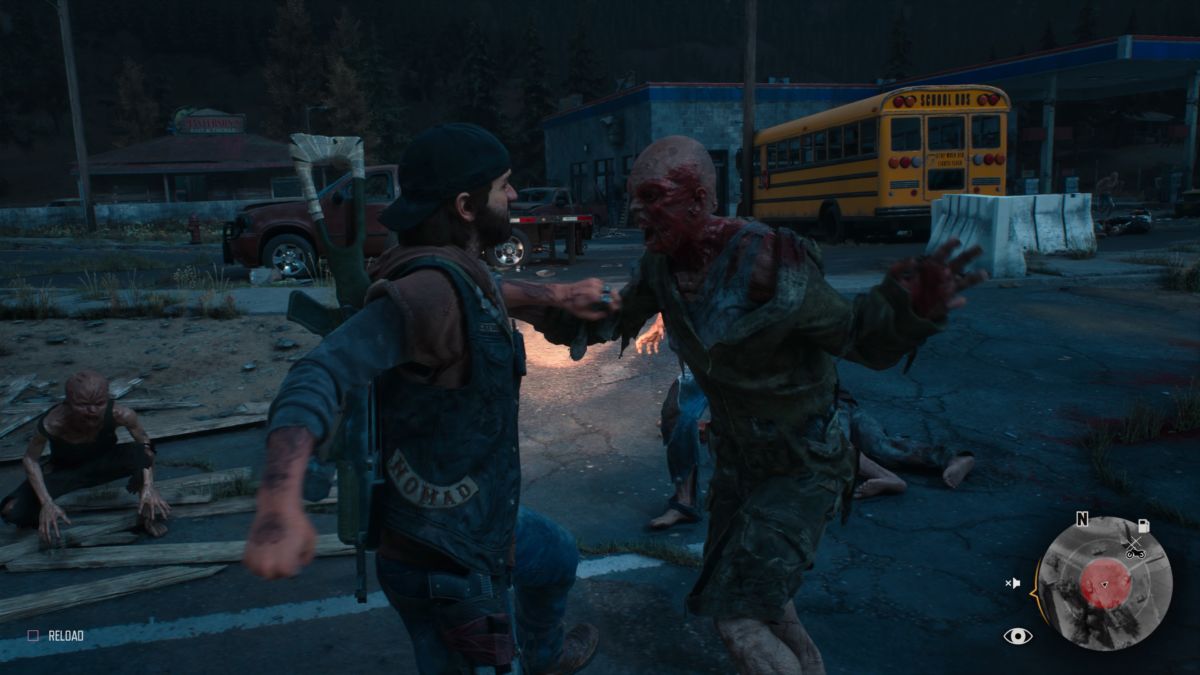 Early on, Deacon St. John (which is still an awful name, by the way) is, in a word, a weirdo. Sam Witwer’s delivery as Deacon constantly talks to himself is inconsistent, going from outraged and vengeful to strange and whispery in a matter of seconds — it’s really all over the place. Eventually, however, you come to realise that this is by design: the almost solitary life Deacon leads has left him mentally unbalanced, as well as the grief he carries with him making him forget his better side. If you can persist with his early quirks, Deacon begins to “assimilate” again and show signs of becoming, well, normal.

Once it all starts to gel, Days Gone becomes a real treat and one of the most interesting open world games of recent memory. It’s certainly one of the most beautiful, the splashing of mud as Deacon rides through it and gentle falling of snow almost begging you to jump into photo mode and fart around in it for like half an hour. The weather also changes gameplay with your bike handling differently based on the conditions, as well as the Freakers behaving more aggressively or less. If the conditions are not ideal (i.e. raining or snowing), they tend to come out of their holes a lot more willingly.

For all of its prettiness, Days Gone definitely also has an ugly side — and not just because of the amount of half-eaten corpses that are dotted around the world. It’s quite comfortably the buggiest big-budget game I have played since Mass Effect: Andromeda, though there’s nothing here that’s particularly game-breaking. It’s just far too common to see a Freaker stuck in something or a bear suddenly vanishing for it to not be distracting. The game’s a few patches deep now but I keep finding new, continuously hilarious bugs, so many in fact that I now have more than enough for a compilation video.

Despite rough edges and a terrible start, I find myself getting more enamoured by Days Gone the more the hours go by. I actually thought I had finished the story last night following a big fight, but no: the game world just opened up even more. That I am excited to keep up my drifting ways this many hours in is a sign that I was right to not write it and also Deacon off so soon, and I can’t wait to see how this story ends.

Code supplied by publisher. Days Gone is out now exclusively for PS4.