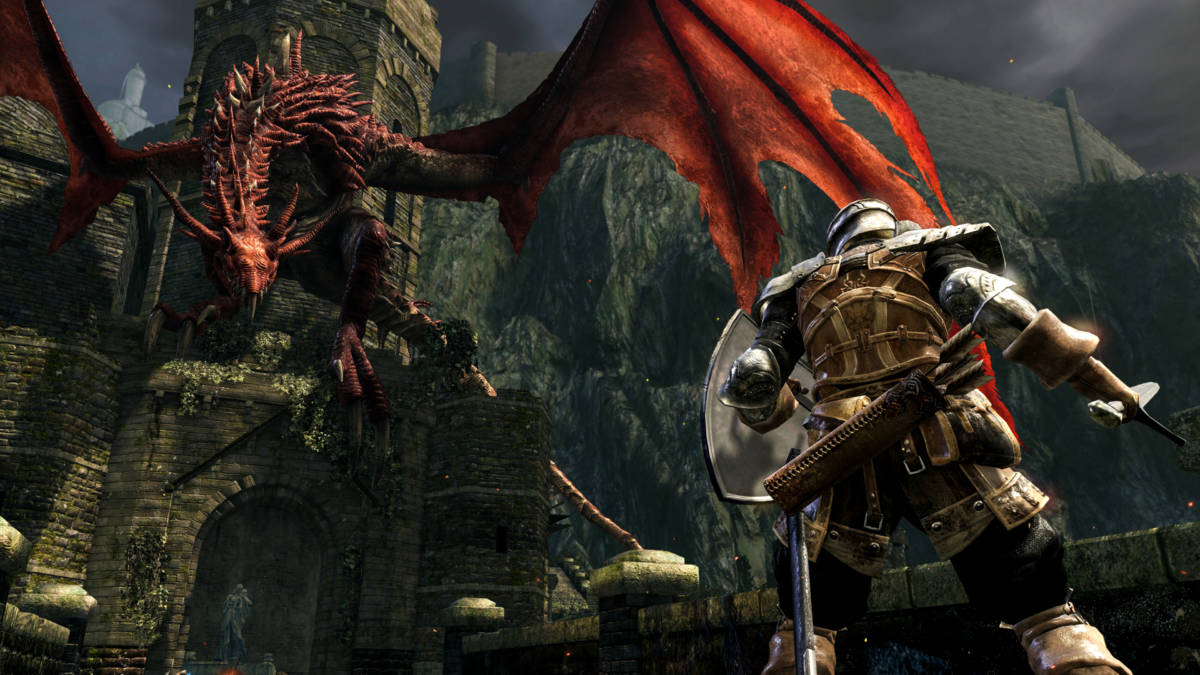 Dark Souls is back. No, not with a new sequel. No, not with a ground-up remake of the original Demon’s Souls. But it is back, this time with an aptly named ‘remaster’ that injects some added visual fidelity into this iconic hack-and-slash RPG adventure.

Waking up in a prison cell in the far off land of Lordran, you assume the role of an undead: a decaying figure with few prospects in life beyond somehow saving this labyrinthine, decaying land. As you take your first steps through the Undead Asylum (the game’s semi-tutorial area), it becomes clear that this is no cakewalk. Enemies hit hard, and your initial interaction with the hulking Asylum Demon will probably result in a swift death.

But persevere, and you’ll uncover an unparalleled journey that’s as punishing as it is rewarding. By utilising the Dark Souls’  tight controls – that have now become a staple of every vaguely medieval 3rd-person combat game – every mistake or slip up is pinned solely on your inability to survive. Whether or not you opt for a sword and shield combo, pyromancy flame, or something heftier – defeat is consistent and educational.

For some, this might prove too much. The initial hours of Dark Souls are undoubtedly tough, and no clear goal beyond ringing two mysterious bells means that you’ll either have to work out where to go, or consult one of the many online guides for some sense of direction.

This isn’t to say that the game completely abandons you on arrival, though. Dark Souls features some of the best world design in gaming, with twisting staircases and rickety elevators that somehow all interconnect to form a brilliant puzzle of a world. Travelling from the relatively picturesque hub of Firelink Shrine down to The Catacombs is an exciting discovery, and is just one example of the many unforgettable moments that Dark Souls’ level design permits. Many areas will cross over to your complete surprise, and its in finding these shortcuts that you’ll cut down travel time between deaths.

Because you will die. That shouldn’t come as a surprise, but as somebody who hasn’t played the original Dark Souls as much as its sequels, I forgot quite how challenging things can get. It’s fine for veterans who know all the secrets (like the Drake Sword), but imagine encountering the behemoth Taurus Demon, and not knowing to drop onto its head to deal massive damage? If you have no idea what I’m talking about, then get researching (like how to get the Drake Sword – seriously).

If you’ve played more recent From Software titles like Dark Souls 3 or Bloodborne, then you’ll know roughly how combat plays out. Pressing R1 will unleash a light attack, whereas R2 will cause you to swing a bit harder. L1 typically blocks with your shield, and L2 can be used to parry.

However, unlike those other titles, Dark Souls has a weighty purposefulness behind every blow that became more streamlined in later entries. Dashing madly around like the hunters of Yharnam won’t work here, because your waddling knight or mage isn’t as quick on their feet. Yes, you can roll and sprint with Circle, but expect more of a wheezing stumble than a deft leap.

Of course, this isn’t just a review of Dark Souls. The Remastered subtitle means that fans and newcomers alike have to be given reason to shell out £30 for a six year-old game. So what’s new? Well, the most immediate – and main – hook of this release is an upgrade from the original 30fps/720p to 60fps/1080p (or 4K, if you’re capable).

While this might sound irrelevant to non-tech types, what this results in is a supremely smooth experience that makes the original PS3 and Xbox 360 releases look laughable in comparison. Textures haven’t been noticeably redesigned, but the increase in visuals makes the world of Lordran even more enticing than before.

Particle effects also seem to have been given a boost, with elements like the game’s Bonfires (save points) glowing brighter than ever. These are all arguably minor upgrades, but it’s definitely worth noting if this is your first trip to Lordran.

Additionally, multiplayer has increased to up to six players, with password matchmaking making playing with friends even easier. It’s a welcome change, but one which might not be enough to sell Dark Souls Remastered to veterans of the series who have already put hundreds of hours in to the original.

And that’s the key point with this remaster; it’s good enough, but doesn’t justify itself as an essential purchase. For newcomers to the series, it’s an excellent idea – especially if Bloodborne was your first foray into the minds of those sadists at From Software. For Switch owners, it’s a chance to get infuriated on public transport at something other than ludicrous rail prices. But for everybody else, Dark Souls Remastered is the game you already know and love with a fresh coat of paint.

Don’t get me wrong: the smooth framerate is gorgeous; especially in areas like the dreaded Blighttown that dragged the PS3’s frame rate down to 15fps or below. But this is something you’ll stop noticing after a few hours of immersive play. So if you’ve never dived in to this absolute gem of a game before, or you want to revisit where it (kind of) all began, then Dark Souls Remastered is worth your time and money. If you’re looking for a more substantial reason to return, though, then this might not be enough.

Verdict
This is the incredible game that you know and love - nothing more, and nothing less. It's an amazing way to begin the series for newcomers, but hardcore fans might be let down by the absence of additional content. Microtransactions: None
9.5