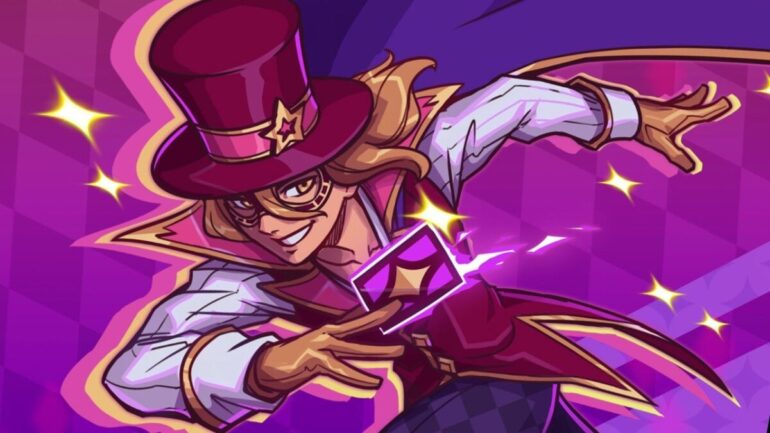 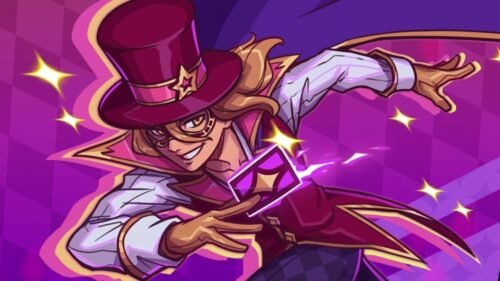 If there’s one thing that all the recent, big roguelike games have in common, it’s that they are all wonderfully difficult and depressingly dark. Developers Mad Mimic set out to change that dynamic and create a game that retains its difficulty but adds a lot of charm. And pink. A lot of pink.

The result is Dandy Ace, an enjoyable roguelike adventure that follows the endearing magician Dandy Ace as he attempts to escape a castle conjured inside a cursed mirror manipulated by Lele, The Green-Eyed Illusionist.

Dandy must escape the mirror world using his magic cards to defeat the hordes of bunnies and other magical creatures that are trying to stop him. The magic cards are the source of all of Dandy’s powers and come in several categories: blue cards are for agility, yellow cards are for map control, and pink cards are for direct damage. The player starts every escape attempt with only three cards, but will quickly find more as they progress through the castle.

Each level is based on a different location in the castle, with Dandy navigating the different halls to reach the throne room and challenge Lele to a magician’s showdown. Along the way, Dandy must find stronger cards to defeat the ever-growing number and strength of Lele’s minions as well as locate four keys that unlock new paths within the level. These paths can lead to new loot, new sections of the castle, and even a new boss.

Mad Mimic’s unique spin on the genre is how they chose to tackle item synergy. Dandy’s cards have two abilities: a main use effect that is used when the card is in the primary slot and an upgrade effect which can only be used when it’s helping the primary card. Each card can only be used as a primary effect or an upgrade effect, so the player must make a choice which effect they want from their cards. Dandy can hold four primary cards and four upgrade cards. The majority of my early fun in the game was figuring out which cards would work best with what items for different scenarios in the castle.

It was a lot of fun theorizing overpowered card setups that would let me move around the castle unscathed, but the best synergy usually kept cards of the same class in both slots. Cards with elemental damage when paired with elemental cards were always the most devastating, while pairing blue cards makes you a deadly blur as you teleport across the level, leaving noxious gas in your wake. However, there appeared to be very few card combinations that were actually better when cross-pairing the classes of cards, at least on higher difficulties. That’s unfortunate, because I think the system has a lot of potential to create some wacky spell scenarios.

The way a player decides to combine these different effects, or which cards they decide to leave behind them, will determine the entire run. I often found myself staring at the card menu for several minutes while trying to create the most devastating combinations with the cards at hand, while lamenting the cards that I was to leave behind me. It hurt to leave a reliable spell behind, but it was worth it when I was able to walk into a difficult boss fight with a hand of cards that all complemented one another perfectly.

It isn’t just the cards that the player needs to take into consideration during their runs. Dandy is rewarded shards as he progresses through the castle and these can be used for different upgrades like unlocking access to new cards, or purchasing trinkets which act as player modifications.

Trinkets give different stats to the player like taking less damage from ranged attacks or adding to Dandy’s overall health. Since the trinkets do not have tiers like the cards, many just get stronger as Dandy progresses through the castle. Though I like trinkets and their inclusion is definitely needed, I felt the majority of the trinkets weren’t that helpful.

I found myself using the same 5-6 trinkets through every run, no matter what cards I was running at the time and, unlike the cards, trinkets don’t offer fun gameplay variations that you can see. I wish the trinkets were even more specific so that I had to find the ones that matched the exact cards I had on me at the time, rather than the more broad uses most of them currently have.

The gameplay starts nice and slow on normal difficulty as Dandy only has a select few cards to choose from, while enemy spawns are lowered and boss attack patterns are much less frenzied. As the player explores the castle, more blueprints for cards and trinkets can be found to start building a more devastating magical repertoire, while the enemy forces become even more difficult to manage. There is a bit of a learning curve as you begin to understand the card upgrade system, but once you know the tricks, the game becomes about perfecting the castle run.

On higher difficulties, Dandy Ace is fast and ruthless. Lele will pack rooms full of enemies with no escape for Dandy, so if you aren’t prepared to deal with the sheer number of enemies and projectiles being thrown at you, your run is over. The game sends a lot at the player at once and there are few ways to effectively counter that. You need to have a solid blue card setup to effectively avoid receiving damage during these sections.

The high intensity of all the fights in Dandy Ace are where the most fun can be found. Being able to run through the castle with hardly a scratch after clearing dozens of enemies off the screen in seconds feels great, even if it was during these high intensity moments that I noticed there were some frame drops, but these moments were still few and far between.

There are only four bosses in the game, but each one is distinct in its play style and personality. There were times where one or two of the bosses could feel like they were too random in their attack patterns to effectively counter them, though. For instance, Severino randomly spawns cyclones that cover the stage and are extremely difficult to avoid effectively.

I rarely felt that I was properly prepared for this section and though some card combinations lent themselves well to taking Severino down fast enough so I didn’t have to deal with the cyclones for that long, the fact that avoiding them is so difficult in the first place makes different play styles less effective.

Despite being defeated over and over, I didn’t mind losing for most of my time playing Dandy Ace because the writing and voice acting always made me want to return to the fight. As Dandy runs through the castle dispatching enemies, Lele will taunt the magician’s progress and though there are a limited number of phrases Lele will use, I never got tired of them because of how well done the voice acting is. Even after the 50th time I heard Lele complain about cupcakes, I still cracked a smile.

Every character is a joy to interact with and I found myself running up to every new character, looking forward to hearing a little about their life in the mirror. The voice actors are always fun and add a lot of depth to these characters that don’t get nearly enough screen time. I wish the bosses and side characters had as much dialogue as Lele because the lines they do have were always a treat to hear.

The core principle of a roguelike is to provide an experience that can be practiced and honed over repeated playthroughs. Failing is the entire point, but the best games in the genre are the ones that can make each playthrough special. Dandy Ace does a great job in the early game of making each run feel like you are learning or gaining something. Whether that’s how best to navigate the castle, obtaining a new card blueprint, or learning that Axolangelo never got his sap green paint, there’s usually a sense that your time isn’t being wasted.

That sense of progression changes as the playthroughs begin to rack up and unlockables become fewer and far between. Dandy Ace has four difficulties and the player must start on normal with each proceeding mode only unlockable after beating the previous one. I like that a lot but the repeated playthroughs offer less and less as a player moves up in difficulty.

Unlike other games in the genre like Dead Cells, you will have seen most there is to see in Dandy Ace by the end of your hard playthrough. The game is always challenging though and it’s definitely enjoyable trying to perfect a run and beating your own personal time. Dandy Ace tracks a lot of stats like specific enemy fatality totals and run times but at the time of writing, there doesn’t appear to be an official leaderboard. I hope that changes with the full release of the game, but if it isn’t, it’ll be a huge missed opportunity for a game that tracks all the run stats.

Dandy Ace is a great change of pace with its lighter comedic tone and phenomenal characters. But the real draw is its fast-paced fights and mix and match combat style that help to match a variety of play styles which will keep me returning to Lele’s magic gauntlet. I just wish there was more reason to move through the higher difficulties other than that it’s more challenging. A few new lines of dialogue, additional unlockables, or an official leaderboard would go a long way in making Dandy Ace feel as spectacular in nightmare mode as it does on normal. 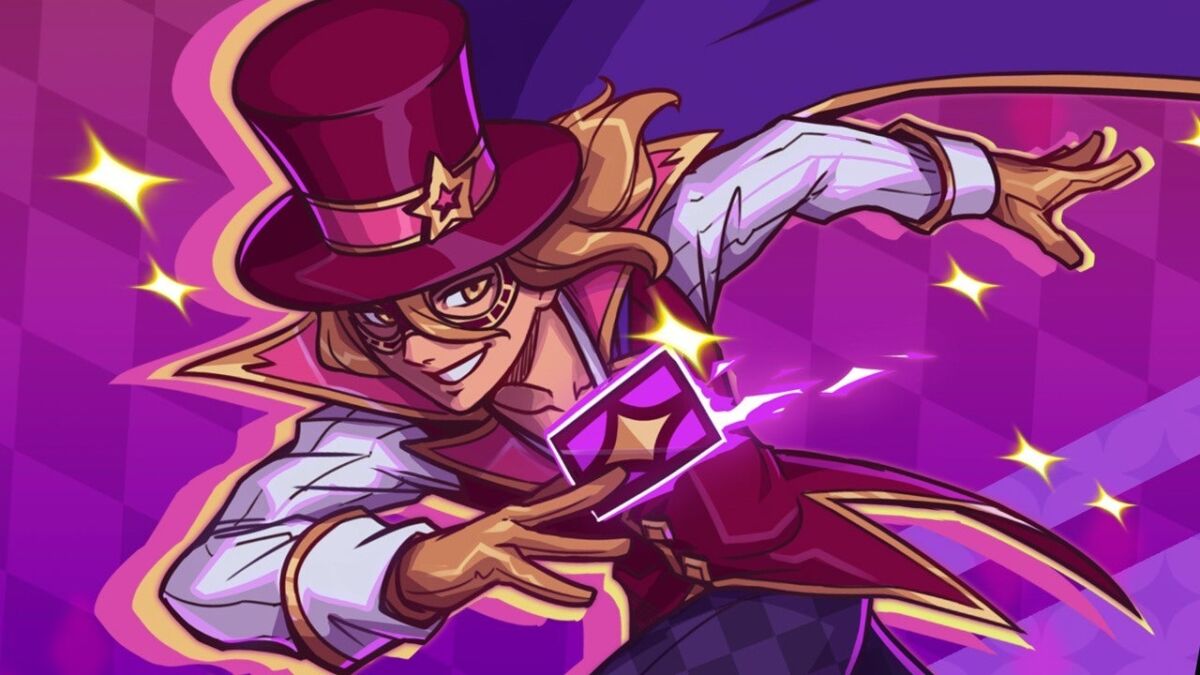 Verdict
Dandy Ace is a fun roguelike with a memorable cast of characters and a unique combat system, but it lacks enough evolution between difficulties to offer motivation beyond just the challenge of completing it.
8
Cultured Vultures is a pop culture website established in 2013 covering all things gaming, movies, and more. We eat your words.
All The News On The Biggest Games