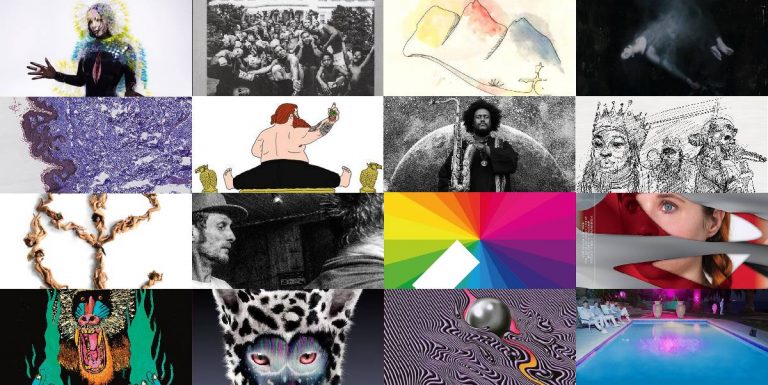 It’s over. It’s dealt with. It’s both done and dusted. 2015 is officially in the rear view mirror, and we’ve fully crossed the border into 2016. It’s 2016, and there’s no two ways about it. New Year’s has been disappointed and is steadily forced into the deep recesses of our minds where forgotten memories go to live, until we’re having a bad day and that little munchkin depression decides to pull them out to play. Only the most shameful and heartbreaking of course.

Then again, you probably had your fair share of that yesterday. What with it being Blue Monday after all. The first working Monday after New Year. The day the festive binge and purge finally catches up with you, and your bank balance is as contrastingly emaciated as you are an overinflated version of your former self. With that out of the way though, maybe it’s time for one more nostalgic look back.

If only so you can agree, scream bloody murder of disapproval, find out the absolute gold you missed out on the time, or to take notes and see what 2016 has got to compete with; we Cultured Vultures got together and all pitched in our favourite albums of the year that was 2015. There were some tears, and I will admit some hair was pulled, but luckily, 2015 was such a great year for music in a variety of different ways that there wasn’t too much squabbling over who got to cover what.

There are innumerable breakup albums scattered through the great pantheon of classic albums one should ingest at some point in their life. You could argue that this is because nothing inspires great art quite like heartache and pain, or that simply great artists are able to translate heartache and pain into great art; creating a particular expression of emotion that all of us will relate to – guaranteed to have experienced it at least once in our lives.

However, I digress, and regardless of why they crop up so frequently among classics, Bjork adds her ninth studio album Vulnicura to the canon of brilliant breakup albums. Teaming up with experimental electronic producers Arca and The Haxan Cloak, Bjork has deviated from the more abstract conceptualism of her most recent albums, that focussed on nature, politics, and technology, to delve deep into the well of emotions she was feeling leading up to, during, and following the end of a 13 year relationship.

In doing so, Bjork hasn’t held back either and has delivered some of her most clear and confessional lyrics yet. Channelled through that voice, the end result is probably the most expressively pained vocal performance you will have heard in 2015. Add that to the expansive, difficult, brooding production, and Vulnicura is the sound your heart would make, that it could, during your worst breakup. However, this is a cathartic album for both Bjork and listener, a necessary purging to alleviate the weight. As the album title translates from its Latin as ‘Cure for Wounds’.

Holly Herndon was a newcomer to the overpopulated, and ever-populating, musical landscape of my mind. It’s got to the point where most things have a tendency to fall off the edges of the horizons into the oncoming void that represents  my ever-reducing capacity for memory. However, if Holly Herndon’s second album, Platform, is anything to go by, then this composer, producer, sound artist is going to be taking up residency for some time.

On Platform, Herndon takes electronica, IDM, art pop, spoken word, musique concrète, and even a little ASMR (autonomous sensory meridian response) then patches it into her musical mainframe to create an exceedinly cerebral listening experience that is as oftentimes somehow serene and intense; intricately cluttered as the mind of a theoretical physicist and vastly spacious as that of a daydreamer.

In lesser hands this could make for nothing more than noise or abstract experimentalism, but in Herndon’s hands the sound of a million or more synthesized sounds, manipulated vocals, miniscule samples of non-instrumentation, clashes and contrasts sound nothing short of stunning. Whilst it may not come across easy listening to most, it often brings to mind what it might be like to amplify white noise so as to hear the details. In close it is a complex beauty, but at a distance there is a soothing simplicity.

Speaking of newcomers onto the musical landscape, and this time not just my own, Atlanta trio Algiers came out of the gate in 2015 with easily the best debut of the year through their self-titled long player. If you remember our best albums of the year so far, back at the halfway mark, you’ll remember that Algiers made it onto my list back then. Well, the year officially over and it still stands as one of my best albums of the year.

What was most striking about Algiers and their debut was just how unlike a debut it sounded and how fully formed and developed a band they sounded. From the slowburning worksong stomp of opening track ‘Remains’ right up to the haunted noisescape of the album’s ‘untitled’ closer as it bleeds away and the blood burns up to reveal the ghost of straight up gospel soul, Algiers is the accomplished and assured work of a band several albums into their career and masters of their sound.

And that sound. What a sound. Managing to dig up and bring together the disembodied appendages of post-punk, soul, industrial, blues, goth rock, electronica, noise rock, and the aforementioned gospel, to create one furious Frankenstein’s monster. Then they give the monster the impassioned, visceral, fire and brimstone croon of the band’s singer Franklin James Fisher, and have him sing and seethe of anti-colonial struggle; racism, religion, resistance, and revolution.

On her fifth studio album, Abyss, Chelsea Wolfe really saw fit to deliver on the promise of its title; releasing easily the heaviest album of her career. However, more so than that, Wolfe was able to perfectly encapsulate the surrealist trauma of experiencing sleep paralysis – something that has troubled Wolfe for many years.

Over the course of its near hour runtime the album bears down on you with a suffocating, sitting on your chest heaviness (‘Carrion Flowers’, ‘Dragged Out’), but ebbs and flows with the struggle in and out of consciousness through an ethereal sense of loss of time and place (‘Maw’, ‘Grey Days’).

The album is equal parts brutal and beautiful, sometimes in the space of a single track (‘Iron Moon’, ‘After the Fall’). Whilst it veers further into her metal inclinations than she’s gone before, Wolfe manages to maintain the presence of her plethora of genre influences, from folk to electronica, and create a dreamlike collage of styles – albeit it one coloured in blacks, greys, and moonlight white.

Chubby gremlin in charge of this place. Won't know peace until I have Titanfall 3 in my hands.

Alabama Shakes have enjoyed a great year, buoyed by finding the mainstream coverage they deserve with their sophomore effort, Sound and Colour. That more people haven’t found and appreciated the album is a crying shame as it’s such a genre-bending thing of beauty that probably the weird cat next door would even bop along to it.

The hooks are catchy and the voice delivering them, the effortlessly smooth Brittany Howard, has to go down as one of the industry’s best. The power and range which she projects is simply stunning at times, ranging from the vulnerable to the triumphant, making tracks like ‘I Don’t Wanna Fight’ just that extra bit essential and inescapable from your mind.

I have this dream of myself as a professional wrestler making his way to the ring to the sound of Action Bronson’s Easy Rider. That’s a weird admission to make, but honestly, any of the tracks from Bronson’s first full-length album could provide the soundtrack to my odd wrestling fantasies – each are anthemic and irresistibly full of hooks and passion.

Bronson’s delivery ranges from the laidback to the intense; it’s clear that he’s a man on a mission to prove that he isn’t all hype and bluster. One of 2015’s most involving albums, Mr. Wonderful managed to get me invested back into rap music again with aplomb. Here’s hoping his follow-up is just as fantastic.

An artist that defies allowing himself to be compartmentalised into a genre, Ghostpoet’s thoughtful, intricate lyrics provide the skeleton for fantastic production on one of the best albums of the year, Shedding Skin. It might not be for everyone, especially if you’re looking for that one party anthem to make everyone lose their shit, but if you have a spare hour, lose yourself in the everyday stories this modern genius weaves.

Whether your mum likes him or not shouldn’t detract from the fact that Leon Bridges’ soul-infused ‘Coming Home’ is one of the best albums of 2015. In a modern age of music where every other song has to be accompanied by an obnoxious horn and production tweaking that borders on the obsessive, Bridges takes it back to what it should be all about – the lyrics and melodies.

You won’t find a more heartwarming collection of songs this year than on this fantastic debut effort. Don’t let the popular consensus stop you from listening to one of the best voices of a generation because you will lose hipster points.