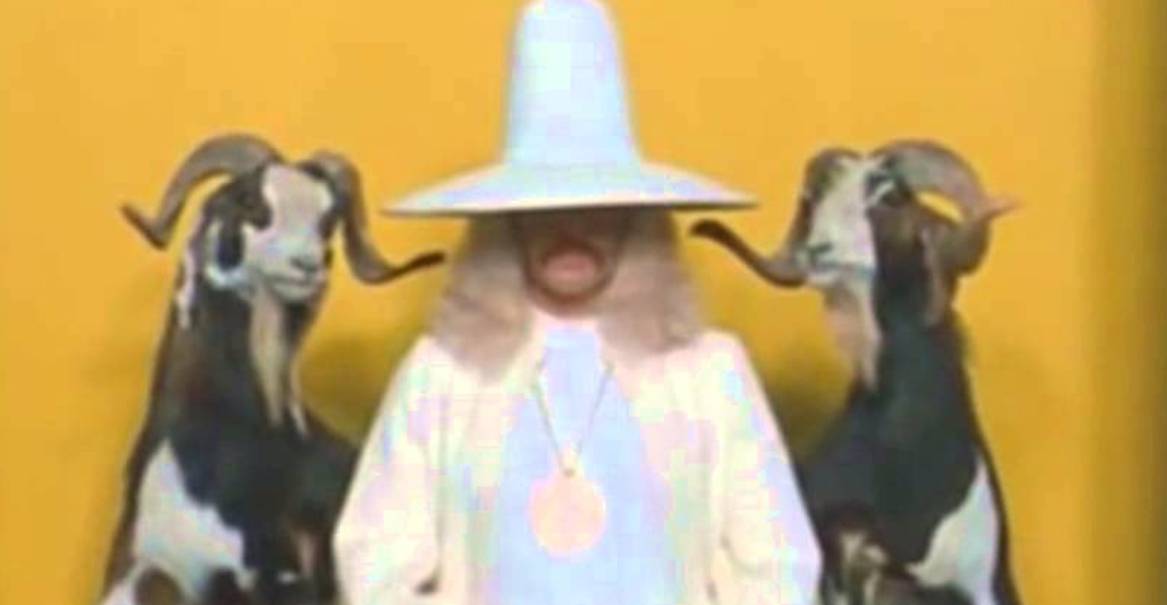 Welcome to Cultured Cult, the column where I examine a cult film in detail. A cult film is generally defined as any film or film genre that a group of people have a great appreciation for, sometimes bordering on obsession. In other words, yes, any film with a cult following. Common genres include certain horror movies, weirdo science fiction, biker movies, good-bad movies (films that are objectively bad that are nevertheless entertaining), bizarre comedies, trash cinema, 70’s porno, all sorts of drive-in movies, blaxploitation, and experimental films on the fringes of good taste. It’s certainly a very broad definition, and one that I’ll feel free to add to as time goes on. The wonderful thing about this non-genre genre is its wonderful fluidity.

It seems only right that I begin my first column with a film by Alejandro Jodorowsky, a man who was once called the “King of the Midnight Movies.” After all, the midnight movie theater (or grindhouse theater) and the drive-in were the two primary places were a fan of everything weird and low (or no) budget in cinema could seek refuge back before video became common. Anyway, besides being a great cult filmmaker, Jodorowsky probably has a legitimate claim to being in the pantheon of the greatest filmmakers in any era or genre.

I suppose I could have gone with El Topo, the film that established Jodorowsky’s reputation as the mad hatter of independent cinema, but I’m more partial to his follow up film, The Holy Mountain. Released in 1973, the film is a bit more structured than Jodorowsky’s previous effort, and its ideas are less muddled. As strange as this might sound when I get into the details of the thing, I feel like Holy Mountain is also the most accessible of the master’s two best known films.

Jodorowsky once famously said, “I ask of film what most North Americans ask of psychedelic drugs.” Fair enough on that score, and it certainly puts into context a lot of the images in The Holy Mountain that don’t seem to make a lick of sense. Every moment is drenched in surrealism, especially the violence, but it always remains playful, with a kind of wink and a smile at the audience. Which is to say that if you’re like me and you don’t know shit about the tarot and arcane magic, you can still get a lot out of this movie.

I remember watching Holy Mountain for the first time. I was in my early 20’s and living near Birmingham, Alabama. I hadn’t heard of Jodorowsky, mostly because his 70’s work was never released officially on video until a few years later, owing to a fucked up deal where Jodorowsky’s manager, who owned the films, removed them from circulation for over thirty years. A friend of a friend had a huge collection of rare underground films on DVD-r, acquired through, ahem, perhaps less than legal means, and he burned me a copy of the movie, telling me that it was going to blow my mind. He was right. The whole thing felt like a weird acid trip, which was kind of the point, of course.

Everything in the film is about taking the audience on a psychedelic journey where the senses are pulled in all directions. Holy Mountain was even shot chronologically, something that almost never happens, since it plays hell with logistics. But by doing it this way, Jodorowsky’s actors went, step-by-step, on the same journey as the characters they play. The mountain that they climb at the end of the movie? No tricks there. Everyone, including the crew, climbed the thing. In this respect, the movie is as much a documentary as a fiction film, since we’re quite literally following people as they go on a spiritual pilgrimage.

Jodorowsky claims that he and his wife spent a week without sleep before the shoot, and when the actors arrived the group experimented with various spiritual practices, took psychedelic drugs (of course), and slept no more than four hours per day. After a while the difference between the actors and the characters they play became rather academic. 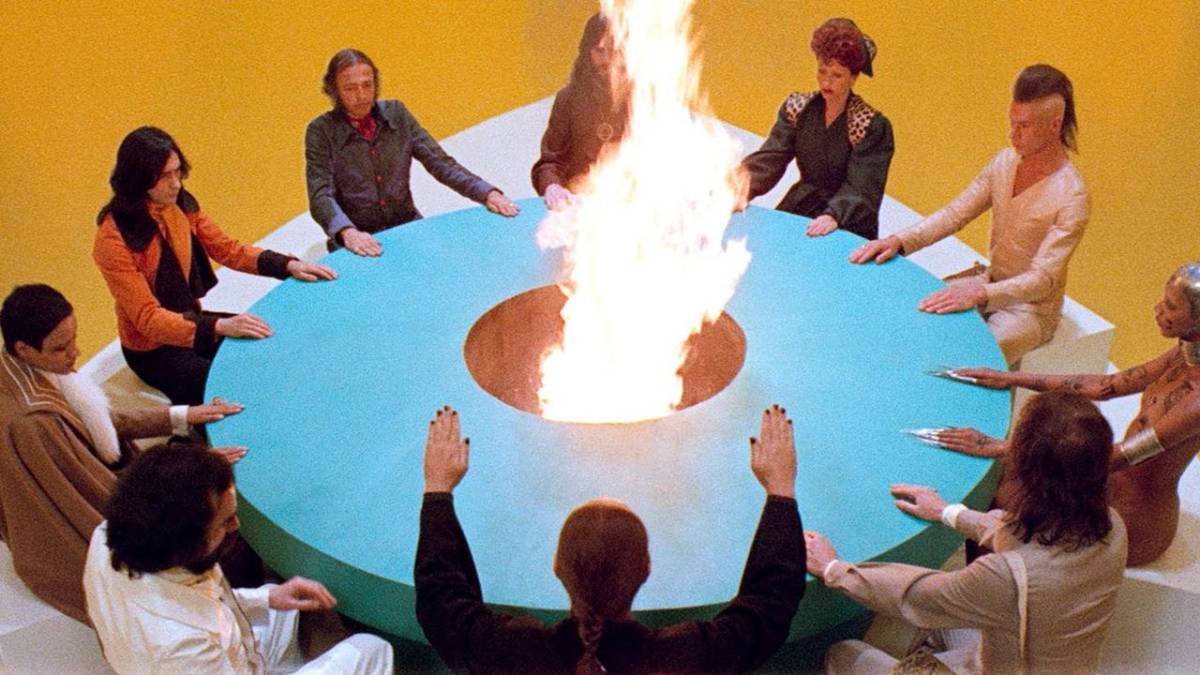 I think the rosetta stone for this flick is psychological idea of alchemy. Literally alchemy is the combination of two base metals to make a precious metal. It’s only something that’s existed in legend if you take the definition literally. But it’s a powerful metaphor about mankind’s dual nature. And it also explains the dual fact / fiction nature of the film. The actors merging with their characters, actually climbing the spiritual and physical mountain. That kind of thing.

All that aside, though, when a movie opens with a Jesus doppelganger getting mock crucified and pelted with rocks by a gang of boys no older than eight years old, all of whom have their penises painted green, well, you pretty much know from the get-go whether this is the kind of film you’re willing to see through to the end. Stick around a bit and you’ll see the faux-Jesus (credited as “the thief”) befriended by a man who is missing both of his legs and a good portion of his arms. When they enter a city somewhere in Mexico where debauchery, immorality, and illusion are the order of the day, you’re either in this thing for the long haul or not.

In the city we see the conquest of Mexico reenacted by frogs that get drenched in blood. We also see people who mass produce life size Jesus figures based on a mold they constructed from the thief while he was unconscious. The thief wakes up and whips his captors, mimicking Christ’s expulsion of the money changers from the temple, then he proceeds to destroy the piles of paper-mache clones. He keeps one of the figures, only to devour its face a little while later.

And here we have one of the major themes of the film. The thief destroys his own image, the false image, the artifice, until there is only him, the real thing.

We finally meet the alchemist (played by Jodorowsky himself) at the beginning of the second act. The thief enters the alchemist’s tower and is put through some crazy purification rituals, including one in which he’s in a glass chamber that uses his sweat as a part of a machine that will turns his feces into gold. Yeah, that really happens.

After this scene, we get into the heart of the story. In addition to the thief, the alchemist has assembled a handful of the world’s most powerful people. They destroy similar representations of themselves, their mannequin doubles, along with their money. (Tellingly, these people are mostly businessmen, though as we know, political power and business are two things that can’t survive without each other.) All of this destruction is in service to their goal of finding immortality by ascending the Holy Mountain.

There’s a lot of power in living forever, right? Well, true enough, but in order get this power, the group has to go through a series of ego-killing rituals in which they’ll shave their heads, hallucinate (a lot), participate in esoteric magical rituals, and for good measure, hallucinate a little more. The ironic result of all of this is that there will be a kind of ego death in which their desire for power will be totally eliminated.

Any description of the movie’s plot just won’t do justice to its violent weirdness. There’s a machine that gets sexually stimulated by a giant glass rod and eventually gets pregnant and has a smaller baby machine, there’s an hermaphrodite who gleefully sprays milk from their breasts, which happen to have tiger heads instead of nipples, onto one of the pilgrims. There’s the woman who has sex with the mountain in order to better merge with it and gain the courage needed to complete her ascension. Jodorowsky certainly knew that he was making something weird, and even if the movie was “weird for weird’s sake,” it would be a meaningful experience, because weird imagery is unexpected imagery, and it has a way of awakening the senses on its own. But of course The Holy Mountain is much more than this.

Much of this fondness for the weird can be attributed to Jodorowsky being a founding member of the Panic Movement, an artists collective that believed surrealism had lost its edge, become too mainstream. At first the group concentrated on wild theater happenings (performances that would horrify modern audiences, and rightly so, because the actors killed animals on stage), but they soon moved onto film, and brought the element of shock and dark humor with them. If Jodorowsky’s early movies give the impression of being fully formed works, this is only because he had been developing his ideas for nearly a decade before he put anything to film.

Holy Mountain, then, exists in this weird place between theater and film because Jodorowsky infused the movie with the immediacy of theater, turning something that is usually a passive experience into something active that can be experienced on an almost spiritual level. Holy Mountain is the result of an uncompromising director pushing the boundaries of his vision. As a result, there’s nothing like it in the history of cinema.