Crying Suns is a solid story-driven take on the sci-fi strategy roguelite. 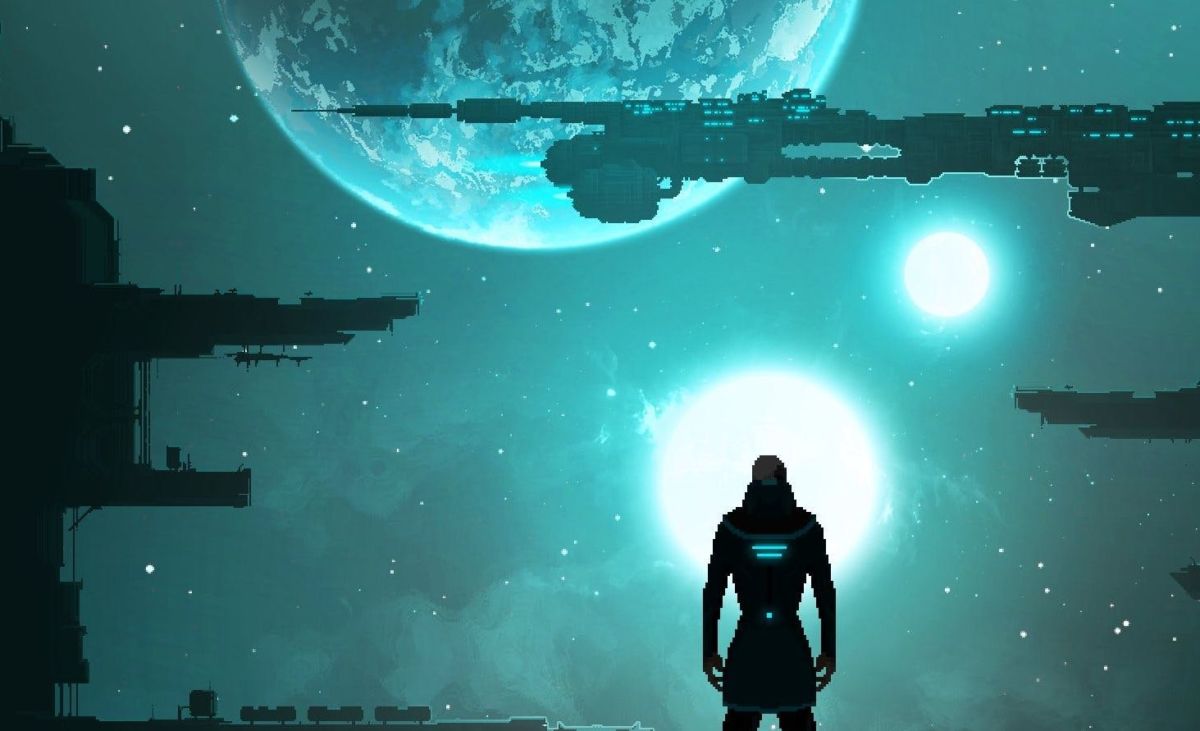 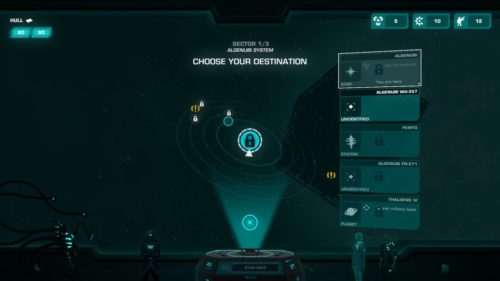 Ever felt the icy stillness of the vacuum of space and responsibility of restoring an empire to its former glory bearing down on your shoulders while casually blowing up pirates? Crying Suns allows you to test that feeling.

The game’s story and setting is an amalgamation of Mad Max, Warhammer 40K, Star Wars and Battlestar Galactica. Taking a unique approach to the game, the developers at Alt Shift have chosen to seamlessly integrate lore elements with game features, such as respawning, relying on the atmosphere and the experience to carry the game. Such a unique approach undoubtedly gives Crying Suns a spot in the roguelite library, yet the lore-integrated game structure also provides the basis for some of Crying Suns’ faults. 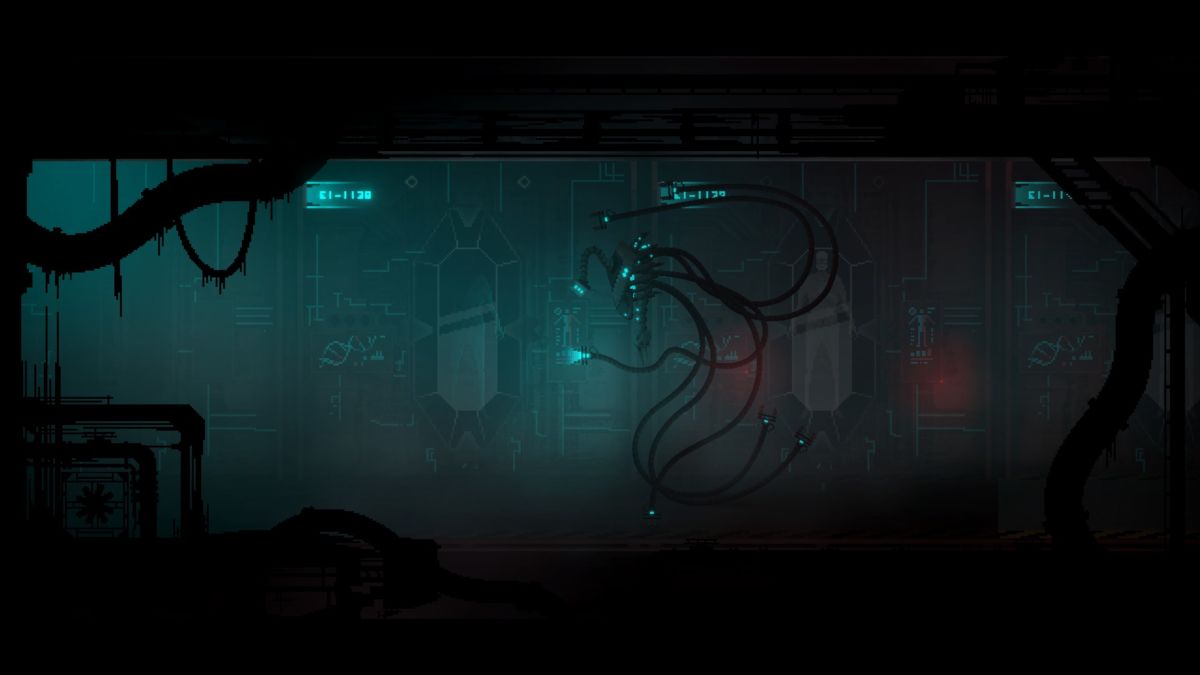 This sci-fi roguelite is a strategy game with turn-based strategic and pausable real-time tactical layers with the main objective of discovering the mysteries of the game’s world and surviving the onslaught of various hostile factions. Players take command of the Imperial battleship, the NS Odysseus, while acting as the famous Imperial Admiral Ellys Idaho. However, the player is not the original Ellys Idaho, but a clone who is part of the Empire’s contingency plan set by the immortal emperor Oberon.

Crying Suns starts with the player’s character waking from a cloning chamber on the secret planet Gehenna without any specific memories of the original admiral. If the player dies in-game, they are once again reborn on Gehenna to continue their quest anew with each of the six chapters serving as checkpoints so that they do not have to start from square one. In each chapter, there are three sectors with a mini-boss at the end of the first and second and main boss at the end of the chapter itself. 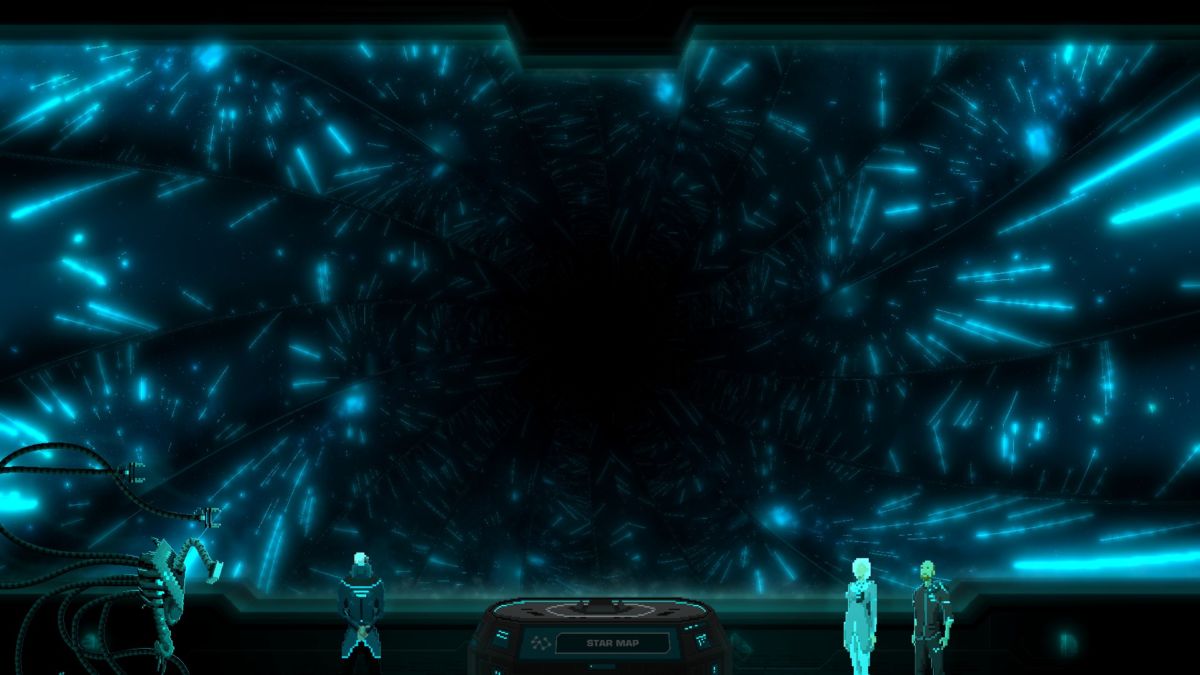 The player’s closest companion is the OMNI robot named Kaliban, who is the steward of the cloning facility on Gehenna. OMNIs are critical to the operation and maintenance of the empire after taking over the majority of systems necessary for human survival. By the time the Admiral Idaho wakes, the OMNIs have mysteriously all shut down, with Kaliban being the last of their kind. The player must figure out a way to restore the Empire to its normal function and turn the OMNIs back on, otherwise humanity will perish without them.

Six factions have risen to salvage what was left of the prosperous Empire: the Scrappers, the Scrappers, the Church, the Pirates, the Akee, Kosh, and rogue Imperials. The Akee and Kosh are descendants of two powerful imperial houses now hunting any remnants of emperor Oberon’s regime. The Pirates and Scrappers plunder and loot to prolong their miserable lives, and the Church seeks to establish a new order treating the OMNIs as gods rather than following the rulings of Oberon. Rogue Imperials have become so mad with paranoia that they will either ignore the player, not believing in Ellys Idaho’s identity, and move on or they wil lattack the player. 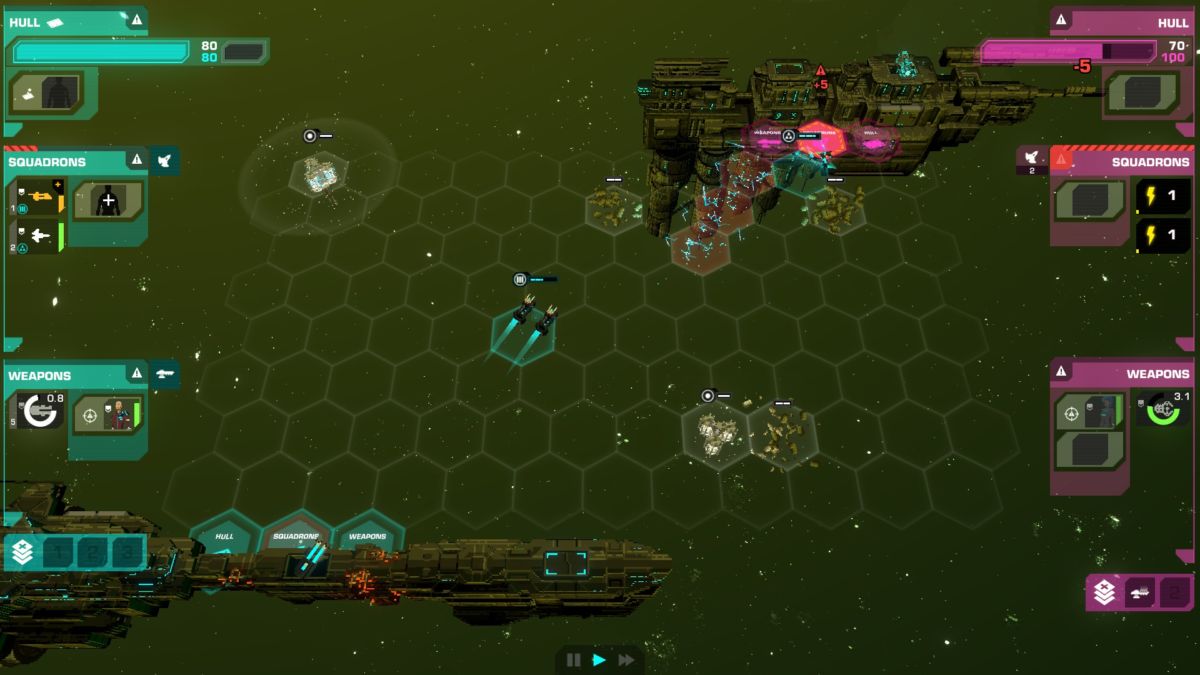 The story itself is interesting and the stakes are high as responsibility rests on the player to both relearn everything their character has gone through in their past non-clone life and also to make sure humanity does not go extinct. The mystery of the OMNI robots shutting off and leaving the Empire adds a lot to the mystery element of the story. From Kaliban and Ellys Idaho’s relationship, it is clear that there’s some tension between humans and machines, but it seems that the Imperial society was relatively symbiotic. Finding an explanation as to why the machines stopped operating is both relevant to consider for humanity now and intriguing within the lore of the world.

The main strategic mechanics for the player are resource management, exploration, random encounters, and ground expeditions. Players need to keep track of their Neo-N fuel as they jump from system to system, and move between planets and points of interest. Along with fuel they must manage scrap to upgrade their ship and purchase weapons, squadrons, and other equipment. Finally, players must keep track of the number of commandos they have on their ship as commandos are needed for random encounters and ground expeditions. Fuel and scrap management, ship movement between systems, and random encounters are taken directly from FTL. 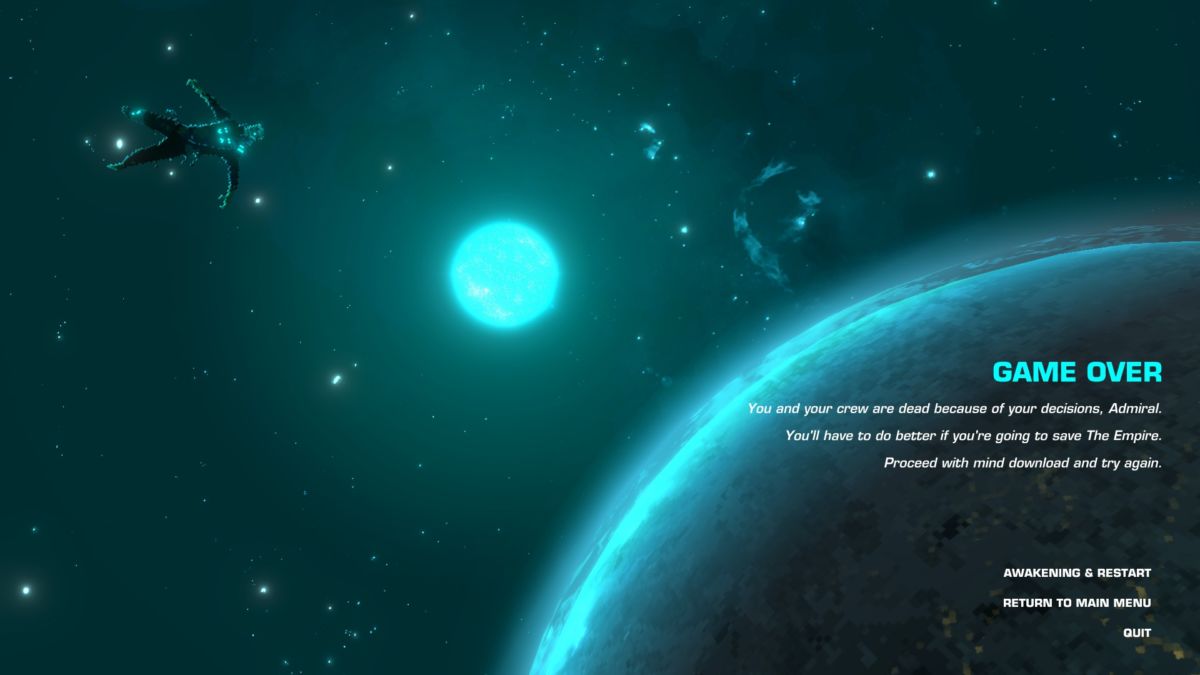 Exploration, random encounters, and ground expeditions go hand-in-hand as players discover more about the empire and gain resources through exploration. Exploration also inadvertently leads to random encounters that can result in combat and the death of the player to a greater understanding of the lore and story, as well as potentially some resources and equipment. Ground expeditions are occasional mini-missions where players send a ship officer and detachment of commandos to find resources, all while using the officer’s skills to keep them safe from ambushes and events. Ship officers also help with random encounters as each officer has a unique set of skills, which can unlock previously hidden options and will usually guarantee positive outcomes due to the officer’s expertise.

When players engage a hostile ship in combat, the perspective shifts to a 2D plane with a hex grid in between the two battleships. Players then deploy squadrons, such as fighters, drones, frigates, and cruisers, to defeat the enemy squadrons and battleship while minimizing damage. The hex grid will occasionally spawn various terrains, like asteroids, EMP stations and defence platforms. The ship officers on the NS Odysseus also give tactical benefits that can provide various combat benefits, like extra squadron speed, passive hull regeneration, or increased weapon rate of fire. It’s important to note is that there is no retreat function, so once combat starts it is a fight to the death. 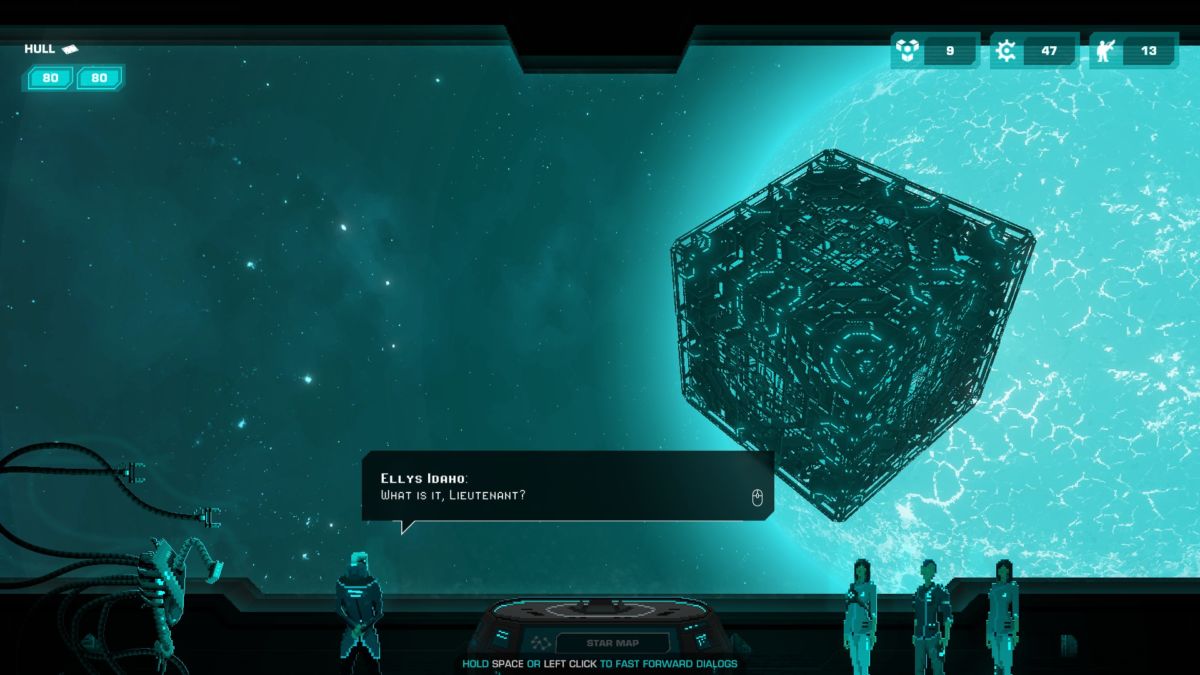 The beautiful 16-bit graphics let the game run smoothly with few drops in frames in transition screens. Because of the resource light graphical style, the developers include only a barebones options menu with little room for customizability. The use of simple graphics emphasizes the distinct and beautiful artstyle, where each faction stands out from one another and the developers have chosen a clear architectural to the Empire and its civilians. The prominent cool blue hue permeates every part of the game, only adding to the sense of an icy and still atmosphere. This, in effect, reflects the setting and the urgency of preventing the Empire from becoming frozen due to the loss of the OMNIs. The dark and pathos-filled electronic music serves to create dread and foreboding, but can get repetitive after a while as there is not much variation between the tracks.

The integration of constant restarts into the story itself is an interesting concept that adds a greater connection to, and understanding of, the world. Compared to FTL, where there is no context to restarts, Crying Suns allows the player to more closely experience the learning process of an Imperial Admiral coming to terms with new skills and situations. Despite the clever integration of the restart feature into the story, after three or four attempts in Crying Suns, the repetition of dialogue and events becomes apparent and makes them tedious. The repetition here felt more like the annoyance a character would feel in a movie like Happy Death Day, rather than the refreshing evolution and development of a character from Edge of Tomorrow. 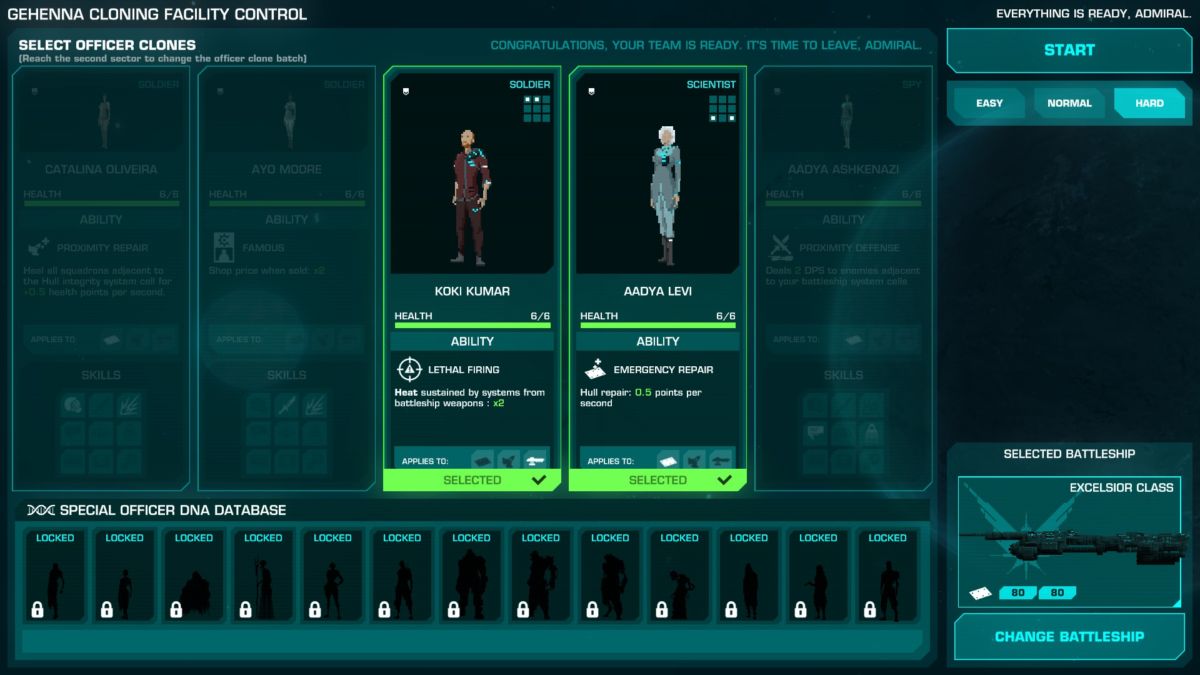 The strategic layer of the game is solid with good resource management implementation of fuel and scrap. Commandos are pretty much a throwaway resource so there is no reason not to use them every chance you get. This leads to the main weakness of the strategic layer, which is ground expeditions. Where most encounters result in player-led combat or dialogue, ground expeditions, aside from the player’s choice of officer to lead an expedition, have no control of the encounters and players will simply watch a short slideshow. I found this to be least engaging feature of the game.

Tactically, the developers have included an interesting tug-of-war style of combat where, especially against higher level opponents in later sectors, the goal is primarily to outlast the opponent rather than to quickly burst them down or fend them off and retreat. Combat is cerebral and focused on unit positioning and weapon timing. The use of squadrons adds a lot of personality to the battles as engagements become less about ship-to-ship combat and more how to stem the tide of the AI’s onslaught of squadrons. For anyone who enjoys science fiction carrier-based combat in the vein of Battlestar Galactica or Star Wars, you will definitely enjoy this approach to combat. 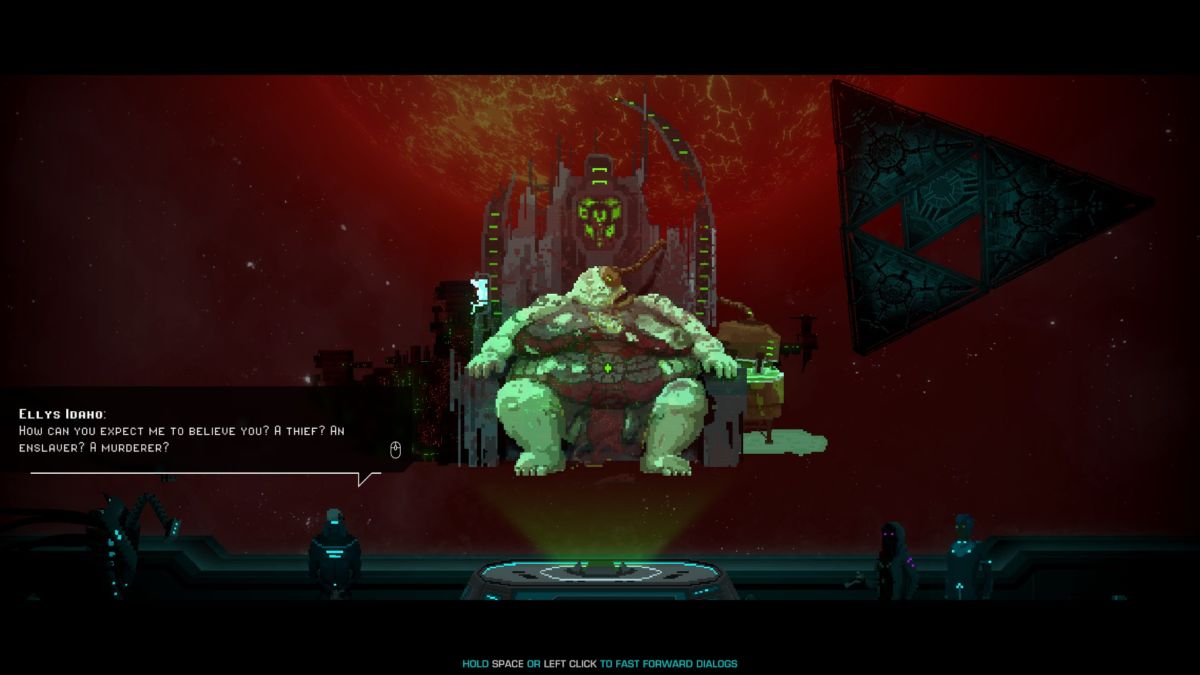 Not all is perfect in the icy cold atmosphere of Crying Suns. Crying Suns’ approach to raising difficulty primarily relies on sharp difficulty spikes, rather than going for the FTL difficulty model of steady and incremental challenge growth. One moment the player might be cleaning house against pirate ships over and over without much upgrading, and then suddenly a sector mini-boss ramps up the difficulty. Because of these challenge spikes, tactical battles can be poorly paced with later fights in story chapters requiring larger amounts of time to complete, adding to the tedium.

For a game so focused on atmosphere, character, lore, and story, the developers have made some odd design decisions that undermine the game’s initial selling point. For example, players can hire standard human imperial officers from a random pool and occasionally find unique officers with their own effects, unique appearance and skills. In essence, these unique characters are better in every way than the standard Imperial officers and usually come from some of the non-Imperial factions in the game. 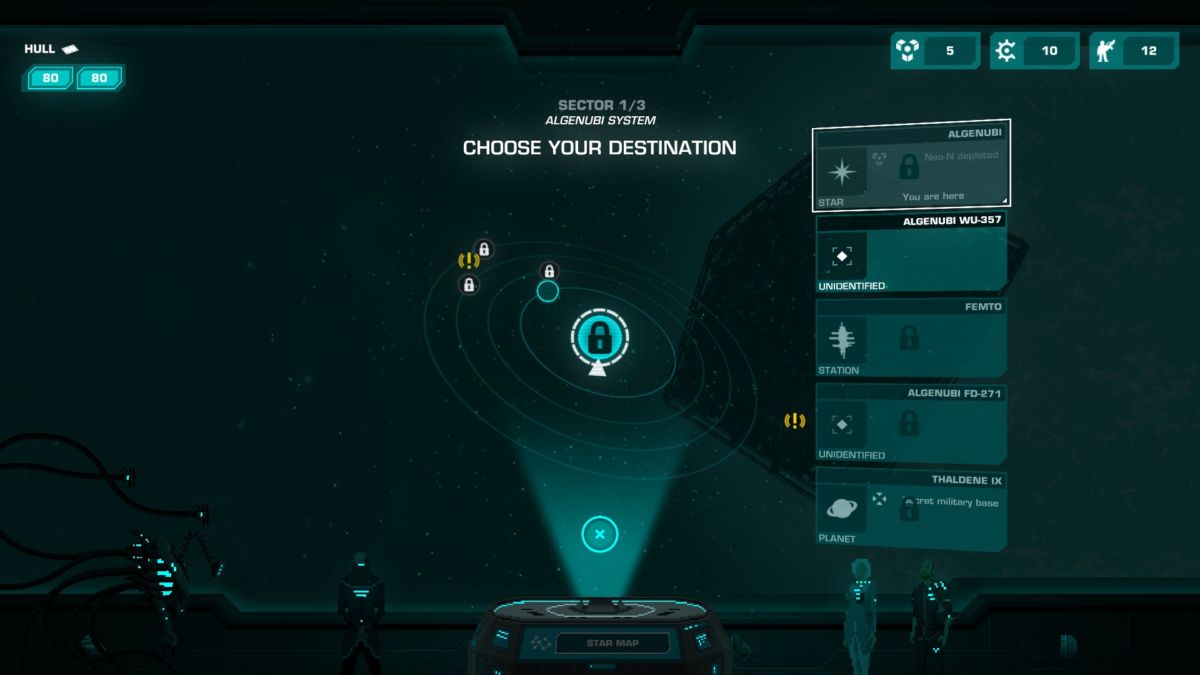 However, these unique officers have no unique interactions or dialogue when engaging in exploration and encounters. The only characters that get any sort of semblance of personality are the named and permanent characters on the ship like Kaliban, squadron Captain Lynch or ensign Lt. Hawks. It is a missed opportunity to really focus on the characters. Another example is that at the end of every chapter the player’s ship get stripped of its equipment and the player starts at square one with their ship in the new chapter.

I would recommend playing through Crying Suns at least once and then on Hard for a true challenge with the expectation that there will be lots of restarting and tedious repetition. The story and presentation itself is worth experiencing on its own merit. Crying Suns is the latest flagship indie sci-fi roguelite title with a greater emphasis on setting and atmosphere than its forebearer.

Verdict
Crying Suns is a solid story-driven take on the sci-fi strategy roguelite, with great atmosphere, an interesting story, and cerebral tactical combat. The experience is mired only by several bland game features, some grating repetitiveness from a lack of variety in events and dialogue, and an odd lack of personality from the officers.
7
Buy on Humble 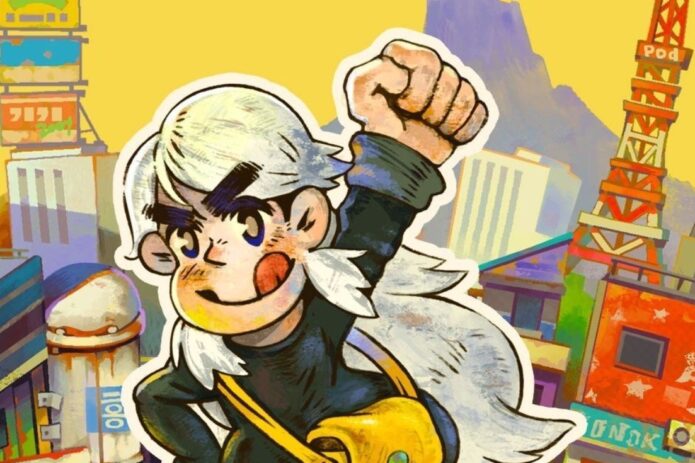