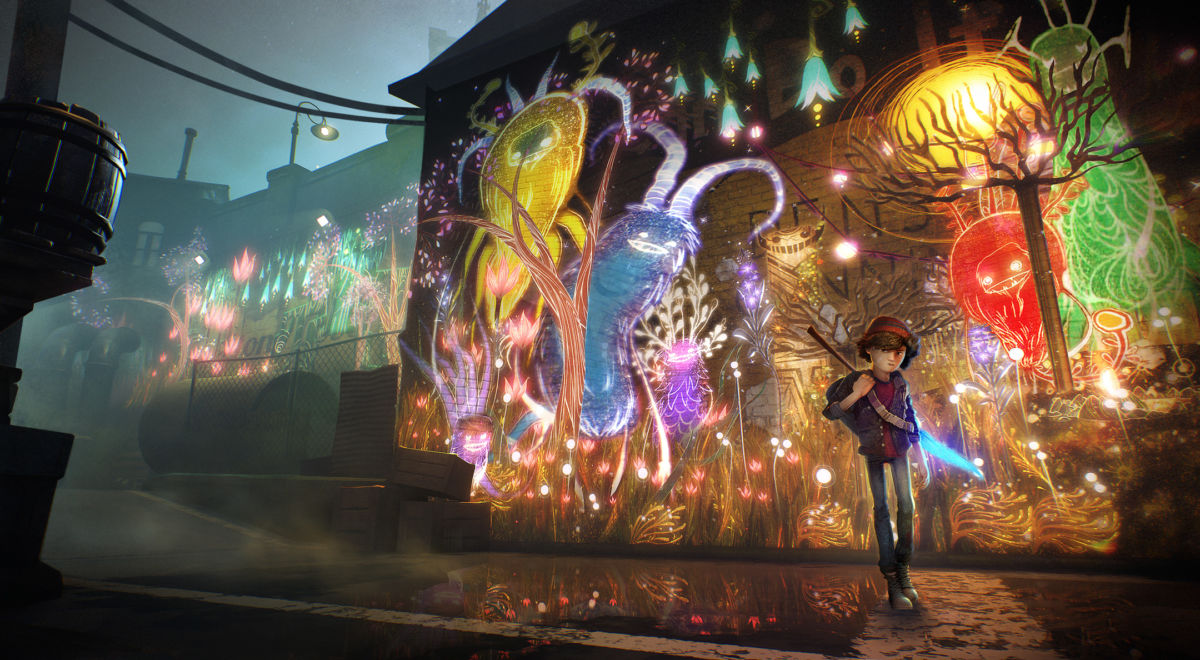 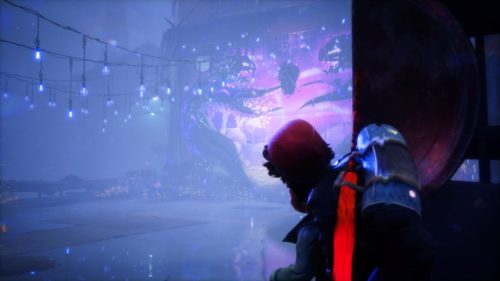 The arts are an escape for a lot of us. Whether there’s too much going on at work or your life isn’t aligning as you’d hoped, a good movie or game can take your mind away from it all for at least a little while, taking you to unknown worlds or making you feel like you could actually stave off an alien invasion with a chainsaw. Concrete Genie is escapism within escapism, it putting you in the shoes of a bullied boy who turns to painting for relief from reality.

The town where Ash grew up in, Denska, has seen better days, it being left completely abandoned after an oil tanker spill set off a chain of events that left it a grim place to be. It’s also Ash’s retreat, somewhere that he likes to go to get away from home life and fill out his sketchbook. When a group of youths tear apart his hard work and he ends up deserted at a lighthouse, Ash meets a loving spirit by the name of Luna who grants him a special brush to bring the town back to life, one creation at a time. 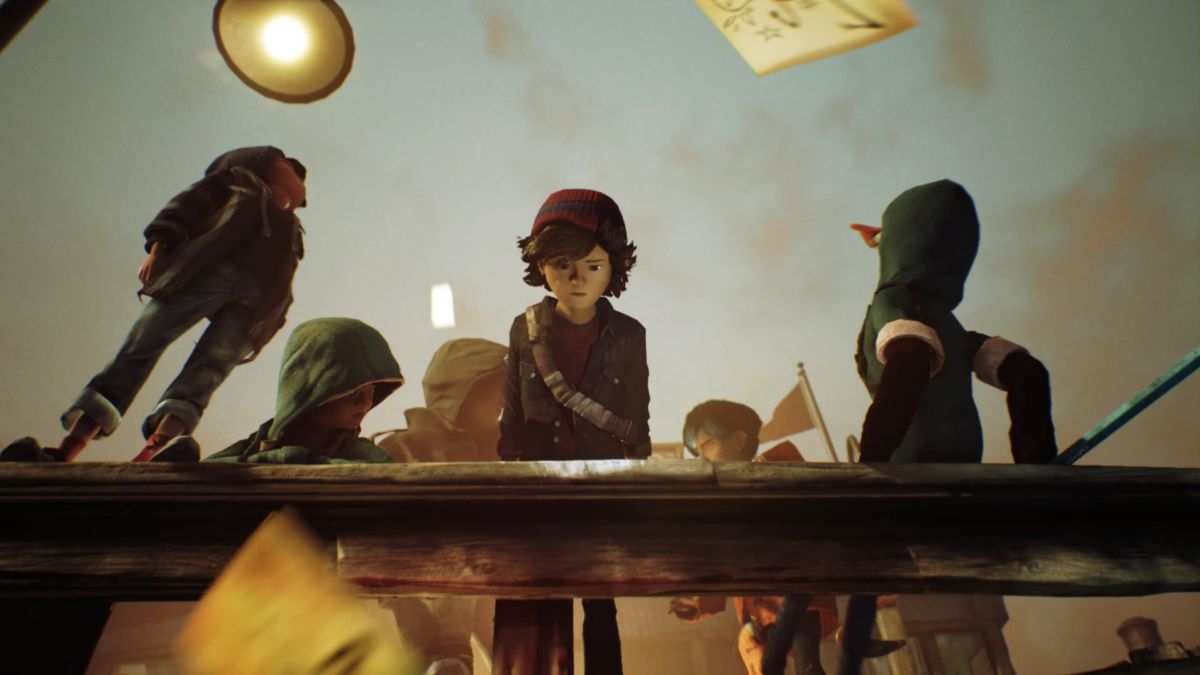 After some initial clunkiness (five years later, I still forget how gentle you have to be with the DualShock 4’s motion controls), you will be painting the town red — or whatever hue you like. Almost every wall in Denska can be used as a canvas, you being able to create some elaborate designs with a little bit of practice and patience. Everything is based on presets, which you can unlock by finding Ash’s discarded pages across town. While some may find it disappointing that you’re somewhat guided in your designs, it’s an understandable decision to stop Denska from looking like Jonah Hill’s notebook in Superbad.

By using R2 to bring up your notebook, you can then choose from a broad range of different designs with the size and placement of them being decided by how long you hold to paint and where your DualShock 4’s motion is dictating. It’s a shame that smart usage of the DualShock 4’s biggest gimmick has died off in recent years, as Concrete Genie shows how it can be creatively implemented to great effect. It helps that Concrete Genie is a largely pacifist game without too much going on at once, something straightforward that you can play for a few hours — and likely smile all the way through it. 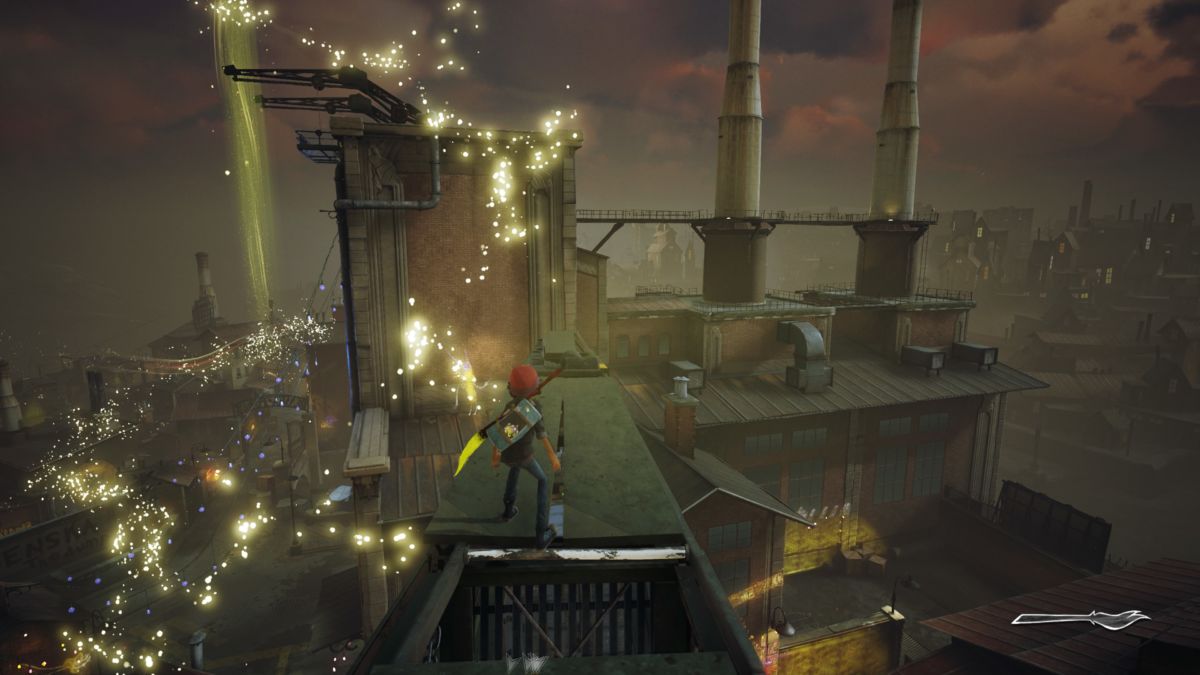 While there’s a lot of relaxation to be had from filling a wall with mushrooms and suns, the real joy to be had in Concrete Genie comes from the eponymous genies themselves. Using a preset from one of the many pages you find scattered across Denska, you are able to create genies that can help you out with the game’s untaxing puzzles, but not before you give them five horns and a tail where it really shouldn’t be.

These endearing creations will follow you around as long as they have a wall to be on, and if “the darkness” is not blocking their path. These aberrations take the form of large vines that obstruct passages and can be destroyed by bringing the lights back on in zones by painting over them, as well as using Super Paint to brighten up darkened walls. To get Super Paint, you need to follow what your genie wants you to paint, which is really just an excuse to watch them be adorable. There are lots of great details in Concrete Genie, such as being able to sit by a painted campfire with your genie or watch them float away with a balloon. 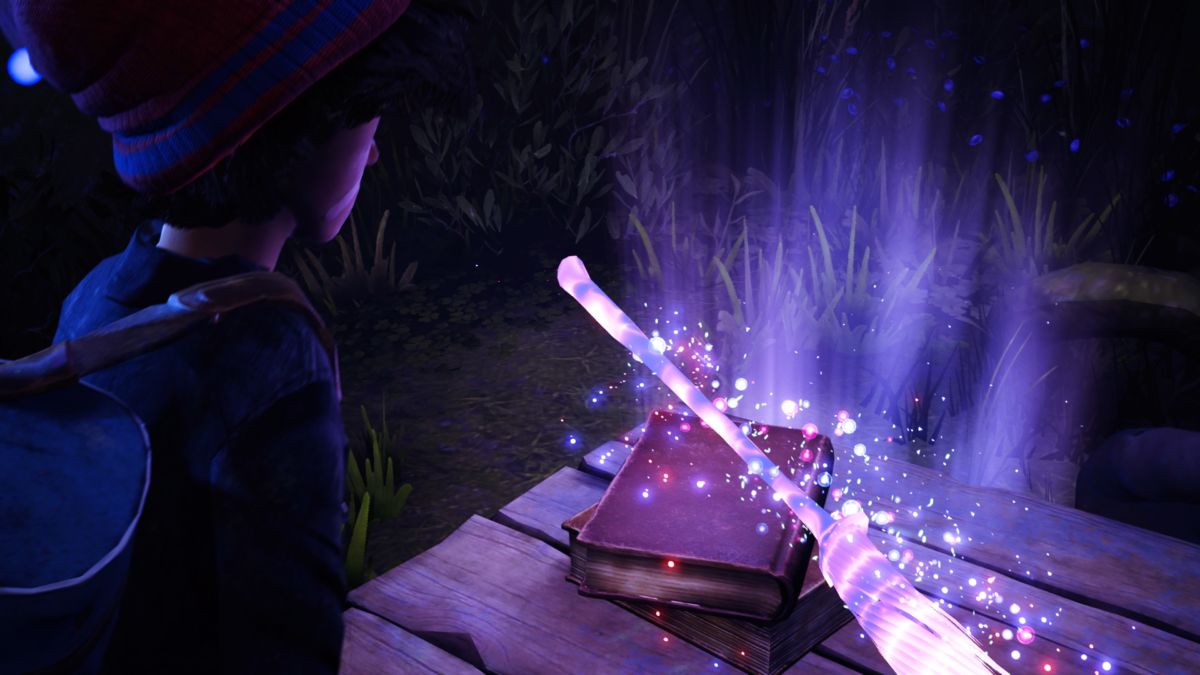 Concrete Genie’s animation, coming across like a mix of Ray Harryhausen’s work and Laika’s output, is vibrant and full of personality. The “missing frame” style of speech works wonders to make each scene feel distinctive, while Ash’s memories of Denska’s glory days are told through static yet vivid comic book-esque scenes that simply jump out of the screen at you. Ash encounters the bullies many times through the course of Concrete Genie with their reasons for being the way they are being revealed as the narrative progresses, which also coincides with a major switch-up in gameplay two thirds of the way through that I won’t spoil here.

From a technical perspective, the genies themselves are something of a marvel, that your own creations can follow you around while inside a 2D plane as you lighten up the darkness in 3D. Their helpfulness in puzzles depends on what element of genie they are with the staples (fire, thunder, wind) coming in to play. For example, an early puzzle tasks you with opening a door, leaving you to call upon your fire genie to burn it down. It doesn’t get significantly more complex than that for the rest of the game, so those wanting something to test their brain may want to look elsewhere. 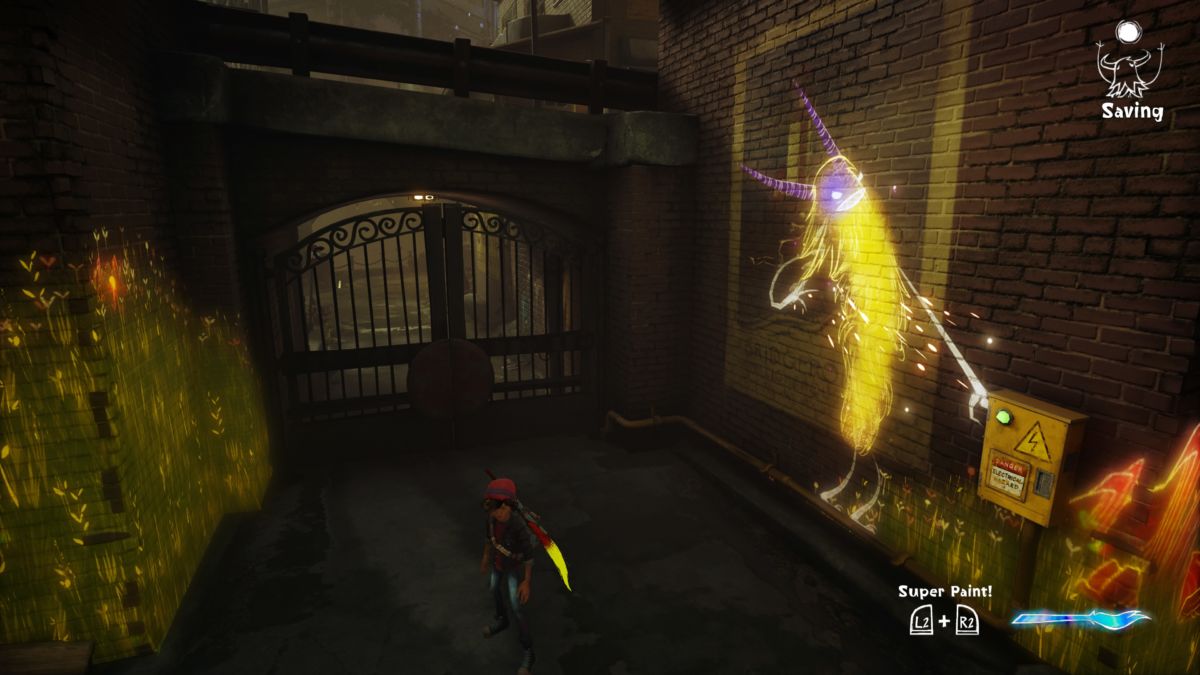 For anyone who wants a charming platformer with unique mechanics, however, Concrete Genie is a real gem, though a rather short one. It took me just under five hours to clean up the town, including a whole lot of exploration for potential secrets. For my money, though, it stayed around just long enough so that the hook didn’t become stale, it telling a simple story beautifully without any unnecessary padding.

If you do want more bang for your buck, there are plenty of (very easy) trophies to unlock and pages to mop up across Denska after the credits have rolled, while Free Painting allows you to visit different areas and paint the day away. In addition, you can jump into VR with a PSVR headset for a separate mode, though I wasn’t able to try it out for this review. There’s a decent wedge of content here, especially for the lower asking price. 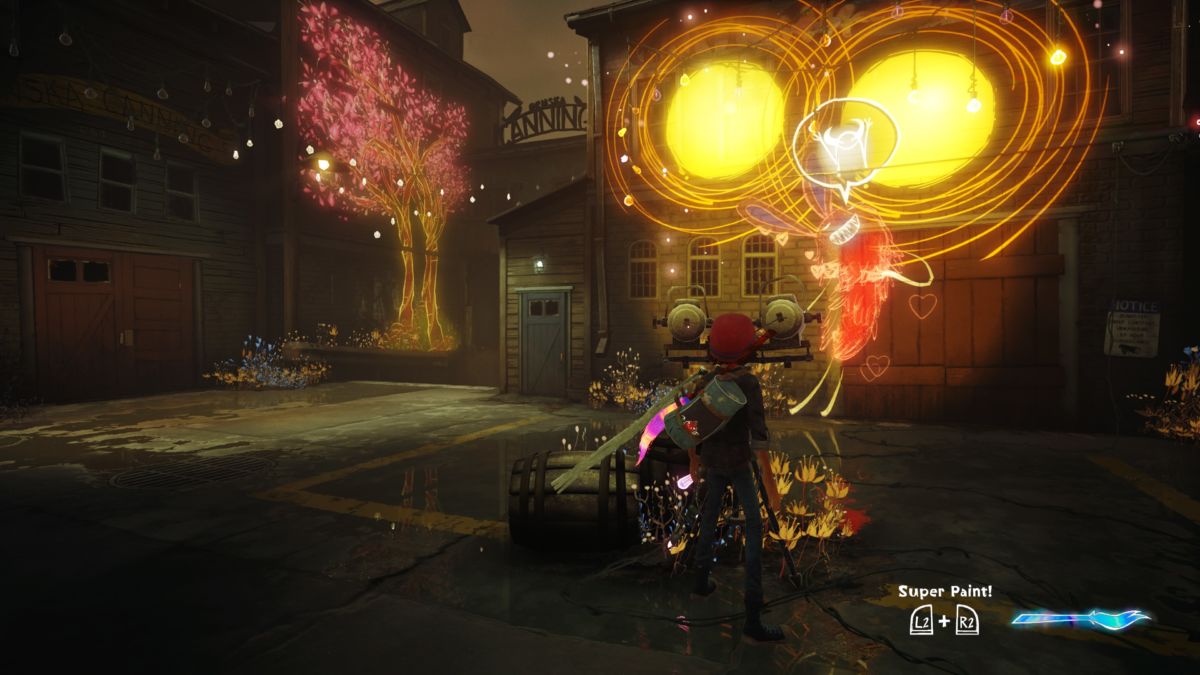 Concrete Genie isn’t without a few faults, however. The camera has a tendency to go haywire during indoor sections, and traversal in general could do with some tightening up as it feels somewhat floaty when jumping and scaling up buildings. You don’t do much out-and-out platforming in Concrete Genie, but whenever you do it really doesn’t feel that great at all. It’s also just a little fiddly when there are multiple genies on the same wall, and the prompt to edit genies after creation is pretty temperamental in whether or not it will show.

These are ultimately nitpicks in what is a magical, affecting experience with a heart of gold, though. Concrete Genie paints a pretty picture that’s hard to resist. Here’s hoping Sony continue to support smaller, more creative ventures like Concrete Genie again as we move into the next generation and beyond.