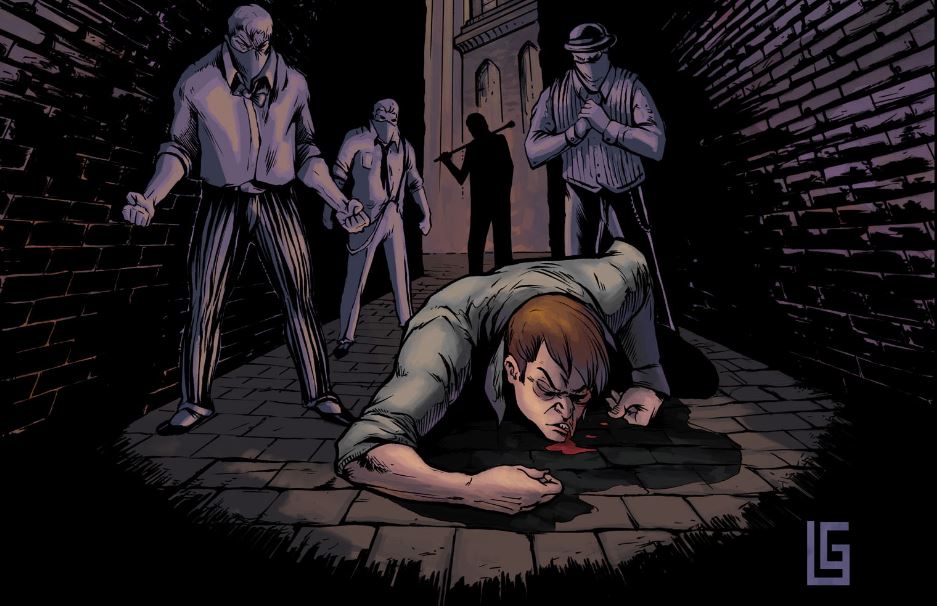 AUTHOR’S NOTE: I can guarantee that this comic is good, but I can’t guarantee that I have no bias, especially since I’m part of the TPub team now. So, you know, you can just ignore this whole article. Or not.

After his work on Twisted Dark, Twisted Light, Tabatha and other TPub must-reads, Neil Gibson (not to be confused with Mel Gibson) is back at it again with Theatrics, the new web comic from TPub. Set in the early twentieth century, Theatrics is about a theater actor who had several drinks too much and ended up in the wrong alley. With great writing, great characters and fantastic art to back it all up, Theatrics is simply a must-read for comic-aficionados and avid readers alike.

Rudy Burns, the famous and fabulous theater actor from New York City, is working his way to the top of the food chain, when one night he takes he lets his habits take over as he drinks pal Sammy in a rather classy so-called “speakeasy”, an illegal bar thanks to the prohibition act of the 1920s. They celebrate past and future success, flirt with some ladies and party through the night. After the rough, fun night, Rudy stumbles outside of the speakeasy and bumps into some grunts in the alleyway. As drunk as he is, he thinks that they want his autograph, but even he soon realizes that they are out to mug him. He tries to fight back, however muggers don’t fight a fair fight, and Rudy finds himself waking up in the hospital, bandaged and looking more like a villain than one of the good-looking heroes he was so accustomed to playing on stage.

The story really makes you feel for Rudy, and although you might not always like the sometimes arrogant actor, you hurt with him through all his troubles. The believable and enjoyable characters go through noticeable character development, and with a new page being released every day, Neil Gibson just has you grasping for more. The absolutely wonderful art by Leonardo Gonzalez, known from his previous work on Twisted Dark and Tara Normal, completes this comic in every way. While the story itself is good, the artful work on every single panel and even the careful arrangement of panels turns it into an absolute masterpiece.

Although it’s only available as a web comic as of now. TPub have launched a Kickstarter to be able to get it printed, for those of us, like me, who prefer the feeling of paper in their hand while reading a comic over simply reading it online. There wouldn’t be any harm in being one of the guys who managed to get what is hands-down one of the best comics I’ve ever read printed, now would there? At the end of the day, you’d be doing yourself a favor, too, because I can guarantee that Twisted Dark is something you will want to read again, and again, and again. I can not stress enough how much I liked it.

Maybe I’m wrong about how good Theatrics is. Maybe I have a bias thanks to my love of Twisted Dark. Maybe I’m right and it is great.

But either way, the only way you’ll find out is by reading it.