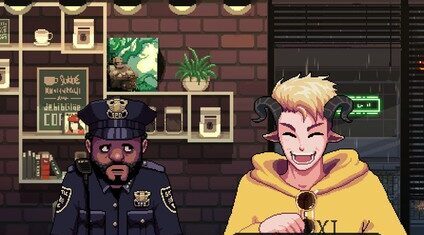 As revealed in the latest issue of Japanese game magazine Famitsu, Toge Productions’ Coffee Talk, the visual novel about fantasy creatures drinking coffee which was released last year, is getting a sequel entitled Coffee Talk Episode 2: Hibiscus and Butterfly.

What is Coffee Talk Episode 2?

Like in the original, Coffee Talk Episode 2: Hibiscus and Butterfly sees players stepping into the apron of a barista in a late-night coffee house in a modern fantasy setting. Players talk with regulars and learn more about the complexities of their lives while lo-fi chill hop beats play in the background. The ‘episode 2’ in the title suggests that this title is more a continuation of the original game than a complete sequel.

From the game’s Steam page:

“In a time where people are isolated from each other, Coffee Talk is a place where we can reconnect over a cup of warm drink.

It’s time to revisit your favorite late-night coffee shop and reconnect with your fantasy friends over a warm drink or two. You are a barista, and your customers aren’t always humans. Listen to their stories and influence their hearts with a warm cup of coffee or two.”

Like the first game, Coffee Talk Episode 2 will involve brewing specific drinks for each of your customers, and remembering just how the regulars like their cup of joe. You can also doodle foam art as the finishing touch on your drinks, if you’re feeling like a real coffee artisan.

When Will Coffee Talk Episode 2 Be Released?

Coffee Talk Episode 2: Hibiscus and Butterfly is scheduled to be released in 2022. While the sequel has only been announced for PC, the original Coffee Talk is currently available on PC, Mac, Nintendo Switch, PlayStation 4, and Xbox One.

READ NEXT: Arcade Classic Swarms on Consoles with Centipede: Recharged