Yet another Boomtown has been and gone, here's our review. 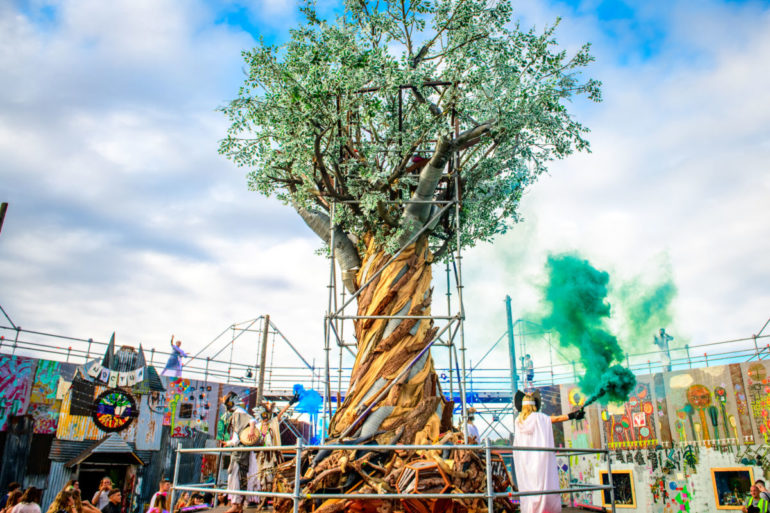 It’s quite astounding to think that what began as a field party just outside Bristol could evolve into a sprawling, 66,000 person strong music festival in only 11 years. So rapid has Boomtown’s expansion been that it is only now really coming to worldwide attention. Even in the four years we’ve been attending, a lot has changed.

Sure, the focal points of drum and bass, reggae, psytrance and folk are all still present and correct, but the complexity of the narrative, scope of the staging and crowd capacity have continued to increase, even in spite of the financial constraints, drug controversies and, this year, the threat of utterly hellish weather.

Despite the 45mph winds and intermittent rainstorms, Chapter 11 will be remembered as yet another successful outing for Boomtown, as well as the year that the digital hive mind known as AMI really took control of the town, but more on that later.

There has been a distinct shift in the flavour of Boomtown’s design and headline offerings recently, as this year the focus shifted further still. The Lion’s Den settled into its role as unofficially official main stage, playing host to The Streets, UB40 and Lauryn Hill (who turned up an hour later, as she is wont to do). Meanwhile, the newly redesigned RELIC (formerly Bang Hai) become the principle custodian of drum and bass, whilst Nucleus (formerly Sector 6) focused mainly on house and techno, including a storming set from Four Tet.

Why all the shuffling? New management. Having displaced BHI at the end of Chapter 10, AMI began spreading her influence around the city, and in turn left the gate open for new interlopers. Metropolis was all but monopolised by a shady tech company known as OneCor, a lifestyle guru calling himself Mr. Bliss took up residence in Paradise Heights and Oldtown was blighted by contaminated soil. Meanwhile, AMI mined for data, and slavering mutants stalked the streets of the new district – Area 404.

This resulted in the most complex, intricate maze yet offered by Boomtown. While the lion’s share of the crowd come for the music and vibes, an increasingly sizeable contingent come for the story, completely immersing themselves in it for up to 6 hours each day in order to get to the finishing line. It’s a real testament to the festival that it can now attract people based almost entirely on this fictitious world it has constructed, however speaking personally I would have liked to have seen more big, staged theatrics around the site at night.

For me, nothing has ever really topped seeing the masked man and his comrades storming the larger stages brandishing road flares and flamethrowers back in 2016, with the closest second being the memorable ‘We Want Your Soul’ motif from the following year. This time around the focal areas were two-fold – one was the idea of contamination, the other was evolution and growth, and AMI say in the middle of it all, but nothing really existed to clarify what she was doing or why she was doing it. During the ending ceremony, it was revealed that she had been gathering the data of everyone in Boomtown in order to essentially duplicate them, but one person evaded her, which sent her into a Shodan-level cyber-tantrum. Had I not already been told what the closing ceremony was depicting, I’m not sure that would have been 100% clear.

This is minor gripe though, really, the actual staging and the content of the story was solid as ever. Nobody who didn’t throw themselves into it could ever hope to get near 100% completion but that’s on purpose, offering people too much is far preferable to offering them too little. In that regard, I think the key points for the team to consider for next year’s story are these – clarity and more appeal to people who just want to dip a toe in. People should be able to get a nice, digestible chunk of story without having to commit their entire daytime schedule to it, perhaps there could even be an easy mode and a hard mode.

As for the music, it was as wondrous and well balanced as ever. Dissorder Alley, having been introduced the previous year, really settled into itself, and more established districts introduced new stages and secret venues than ever before. The addition of the increasingly popular Woov app was very welcome, enabling festivalgoers to ensure they never lost each other or missed an essential act. Personally though, the major highlights for me were Shy FX, Infected Mushroom, Cut Capers, the utterly bonkers closing drum and bass set from My Nu Leng and, most of all, Prophets of Rage.

As far as sustainability goes, the team managed to achieve a 70% reduction in campsite waste, a major step in the right direction. There’s still a lot of room for improvement but the foundations are there and plenty of lessons have been learning about what works and what doesn’t. Certainly, the decision to invite Extinction Rebellion to take over Paradise Heights for an afternoon was a very savvy one. Boomtown is a unique festival, and it requires a unique approach, it was never going to nail this in year one, but it’s a good start. In many ways this felt like a bridge year, a year to figure things out. That in mind, seeing what they come up with for Chapter 12 is all the more enticing.