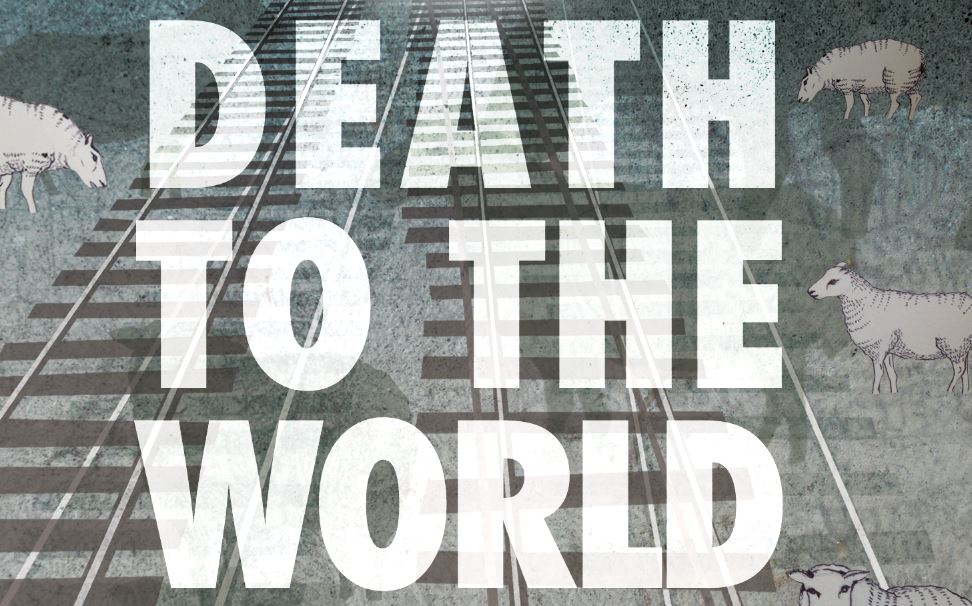 Zeb is a train-hopping vagabond with the words “FUCK SOCIETY” tattooed on his forehead. After losing several of his supplies, he’s forced to stay a short time in a small town. There he meets Natty, a biracial girl with a deep interest in white nationalism and a resentment towards her mixed genes. When Zeb’s odd beliefs and behaviors clash with the local new age burnouts, he’s forced to leave town in a hurry. Natty decides to join Zeb on his journey.

“’Can I come?’ Natty asks him. “I’ve got nothing to live for here.’
“Nothing? Nothing at all?’ Zeb responds, trying to vet her.
‘I’m not even looking to run away from anything. That’s how little I’ve got here.’
‘What will you do in New York?’ Zeb questions.
‘Nothing,’ Natty replies. ‘I’ll do nothing.’”

The summary on the back of Deathtotheworld compares the book to Jack Kerouac. The comparison is appropriate. This novel is very similar to Beat literature. Not just in its story of traveling via train-hopping, but in its outsider characters, its exploration of the fringes of society, and in its concerns with spiritualism.

Zeb and Natty are both outsiders among outsiders. Zeb has removed himself from polite society with his forehead tattoo, but finds he can’t fit in with others on the fringes, nor does he have much of a desire to. He carries a ukulele and sings strange and horrible songs. At one point, he goes to meet a popular “alt-lit” poet who lives in a tree house. When the poet realizes who Zeb’s online persona is (HAarlem VEnison), he rejects him as a “racist doucebag.”

Of course, Zeb is no persecuted saint. He engages in several absurd outbursts that further alienate him from others. At one point he steals a guitar hanging on a wall from a restaurant. Later, when the people he’s staying with start hearing the rumor that he’s white supremacist, he does nothing to dissuade them of this. He simply calls the owner of the home a “fascist niggerspic” and storms out.

Natty, likewise, is just as determined to alienate herself. She finds her self uncomfortable in her own skin as biracial. She rebels against her parents by taking an interest in white nationalism and by running away from home with Zeb. While her interest seems genuine, she spends a lot of time reading literature online about the subject, she seems even more interested in what it represents as a rebellion. She spends her time knitting quilts with white nationalist and Nazi symbols. At one point, she knits a quilt of Pepe the Frog with swastika eyes. This is a topical book in its references to the “alternative right” online movement.

One of the funnier parts of the book is where Zeb and Natty hitch a ride with a group of Juggalos who take them to the Gathering of the Juggalos. Juggalos have been an easy punchline for a long time, but VEnison writes about them with more affection than mockery.

“Juggalo culture and Insane Clown Posse fandom is disproportionately represented within state prison populations, manual labor jobs, welfare offices, child services, addiction clinics, GED programs (diploma equivalency programs for high school dropouts), teenage parents, victims of sexual abuse, victims of the socioeconomic power structure, victims of the tyranny afflicted at the behest of the high priests of the open secret of their era—et cetera. They are the salt of the Earth.”

If I had to classify Deathtotheworld, I’d call it an Unpop novel. Unpop art was a brief movement founded in 2004 by industrial music pioneer Boyd Rice, writer and musician Brian M. Clark, and artist and founding member of the parody religion The Partridge Family Temple Shaun Partridge. According to the official website, the movement disbanded in 2010. Unpop art was about combining offensive and disturbing images with the sensibilities and techniques of Pop art as pioneered by Andy Warhol.

Deathtotheworld juxtaposes racial ideas that are morally repugnant to many with a love story and psychedelia inspired spirituality. The songs and artwork that Zeb and Natty produce would have fit within the movement as well. The biggest difference is that the Unpop movement generally presented offensive ideas and images in a sunny and candy-coated manner for humor purposes. While this novel does have a sense of humor, it’s much more sincere in its goals. Zeb and Natty genuinely want to seek transcendence by placing themselves outside of society and the book looks to question the assumptions of both ethnic nationalism and of mainstream anti-racism.