Eric Glover teams up with artist Arielle Jovellanos for his first flawed but entertaining graphic novel. 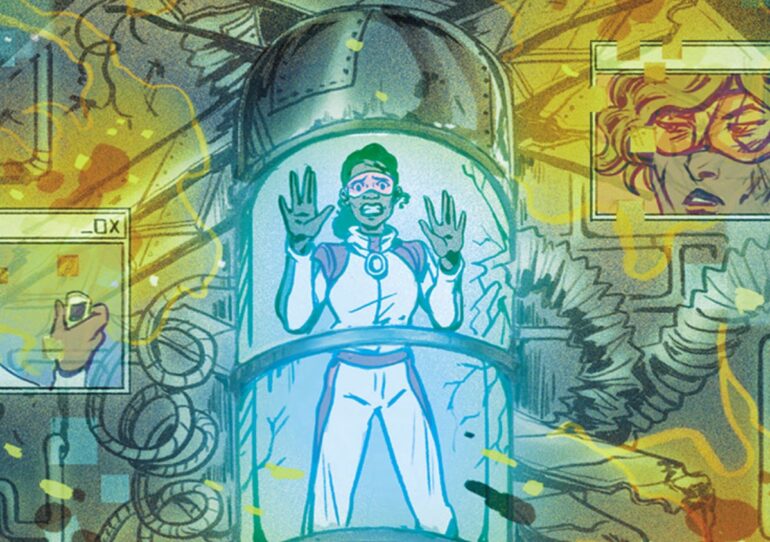 Dr. North crash lands on a hostile planet. She had come to collect a flower that has the potential to cure a disease and save a lot of lives on Earth. However, an unexpected meteor shower destroyed her ship and seemingly killed the rest of her crew. Dr. North seeks to collect the flower and get to the auxiliary shuttle as soon as possible. However, she soon finds that one of her crew members, Parrish, is still alive. The auxiliary shuttle only seats one, meaning they’re in a race to see who’ll be able to leave.

Black Star quickly establishes that North is not exactly a character worth rooting for. In the first chapter, we see that when the meteors struck the ship, she was quick to abandon the crew rather than attempt to help them. We also learn that Parrish lost her girlfriend when the ship was destroyed. However, Parrish is focused only on revenge and escaping and North still goes out of her way to obtain the flower. This may alienate some readers as it’s a fight between two selfish people through most of the book.

One of the biggest problems I had with the book is that we don’t see enough backstory. There are glimpses into the past of the crew, mostly through recordings that North watches in her suit. Partially to try to guess what Parrish will do and partially to try to handle her guilt.

This is a story about people being destroyed by their own selfishness and we see them get worse as the story progresses. I believe that, rather than flashing back, this story would have benefited from being told in a more linear fashion. What most came to mind as I read this is the Twilight Zone episode “I Shot an Arrow into the Air,” another story of stranded astronauts whose relationships break down. That episode began with the astronauts’ having the camaraderie necessary to complete their mission and losing it as everything breaks down. In this story, we’re given a relationship between a crew that has already broken down. Because of that, there is little in the way of surprises when North and Parrish fight for their lives at the expense of the other and the ending seems like a bit of dull thud.

There are also some more minor problems. For example, it makes little sense that a mission with a crew of at least four would only have one back-up shuttle that seats one. It seems there were basically no safety precautions for this mission. There’s also a part at the beginning where North’s hands are cut in a way that looks exactly like stigmata. I thought this would be important symbolism, but besides making her hands messed up for a short time, it doesn’t mean anything within the context of the story. I’m confused why such recognizable religious imagery would be put in with no meaning, unless the writer or artist added it accidentally.

Despite all that, there are some memorable scenes and creative use of the world that Eric Glover writes and Arielle Jovellanos illustrates. For example, the suits that North and Parrish use have built in defibrillators. At one point, North removes hers and leaves it in a river to serve as a booby trap for when Parrish follows her. The two characters also keep things interesting by manipulating what the other wants to their advantage; North the flower and Parrish revenge for her girlfriend dying. For all the problems I had with the story, I still read it all in one sitting.

The artwork by Jovellanos is also solid. The alien planet resembles Earth, but it constantly and quickly shifts from desert to forest to mountain in ways that would be impossible on Earth. It creates a subtly off feeling as North and Parrish travel through it. When acid rain falls or fire surrounds them, you can feel their desperation to escape.

In spite of the problems with the writing, often feeling like an early draft of a much better story, it remains a thrilling ride with excellent artwork. Fans of sci-fi action will likely enjoy this. This was also Eric Glover’s first book and he shows promise to write much better work in the future.

READ NEXT: 10 Trope Bending Time Travel Books You Should Make Time For